Pizza or lahmacun? Either way, it's oven-baked goodness 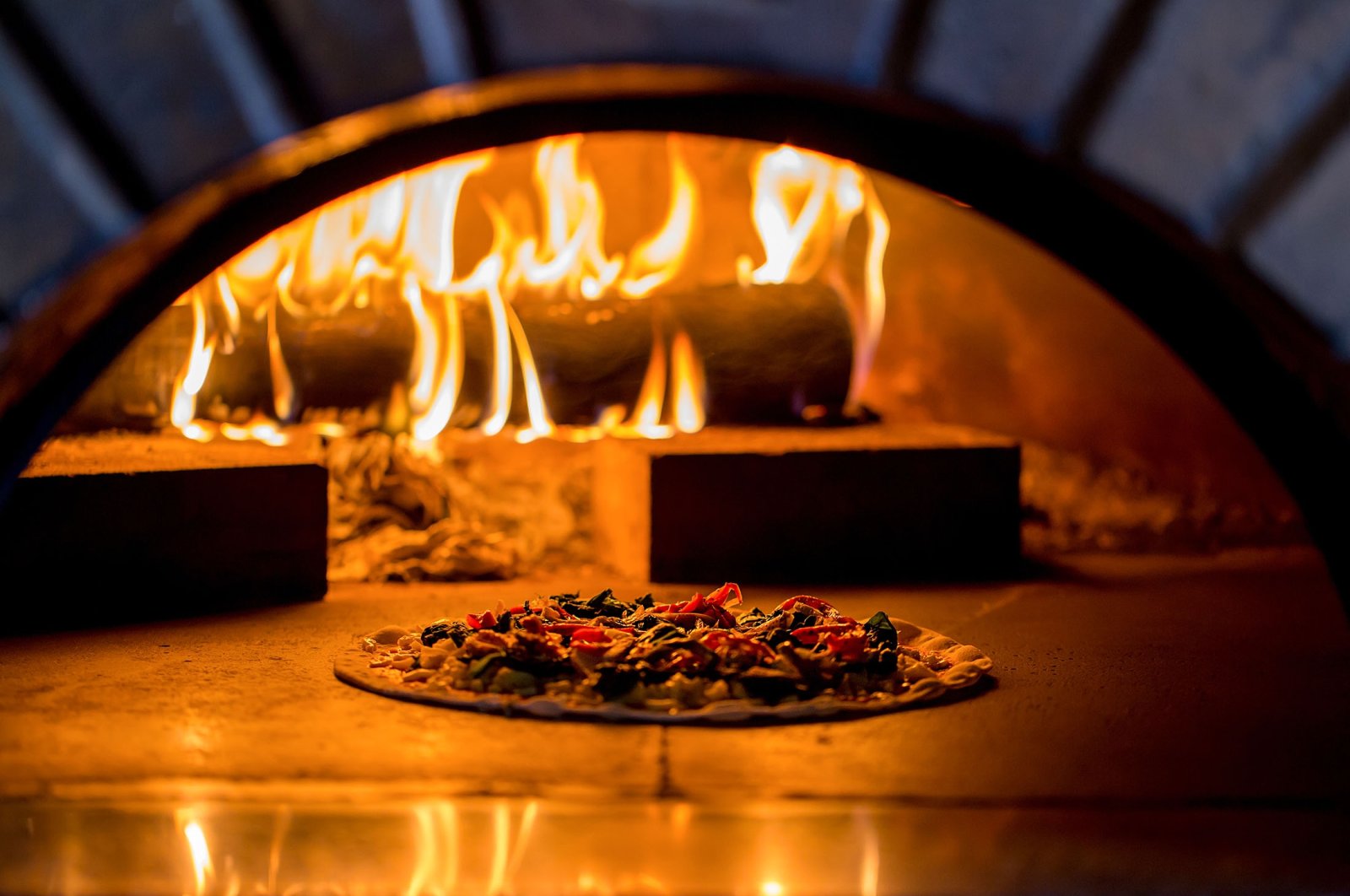 A wood-fired oven may feel like the secret to a crispy crust, but the key is not to use a rolling pin. (Shutterstock Photo)
by Ayla Coşkun Feb 07, 2021 2:12 pm

If you've got the lockdown munchies or are looking to take your home baking to the next level, here are two oven-baked classics to give a try, as well as some unique – and contested – topping suggestions

Pizza is one of the most beloved dishes around the world. The Italians really know what they are doing, recently certified once again when their national dish was chosen as one of the best traditional foods in the world, alongside Turkey’s “köfte” meatballs and some other delectable dishes.

While lahmacun, the titular Turkish pizza which saw interest boom during lockdowns, is nothing like the classic pizza, it is just as delicious. Today, I’d like to share with you the key to baking this food to perfection at home, which is not only cheaper but, dare I say, yummier.

It’s an open-and-shut case with lahmacun: A handful of select ingredients are chopped into a paste-like consistency and spread onto the dough to bake. But when it comes to pizza, tastes are as varied as it gets, so feel free to experiment with toppings. Let’s start with the biggest debate on the internet:

This tropical fruit has a unique texture and because it releases more of its juices while baking, it has drawn the ire of many a pizza lover. It transcended the confines of the internet a few years back when Iceland’s president outright said he’d ban pineapple on pizza if he could.

Interestingly enough, Danila Zanna, the famous and sympathetic Italian chef in Turkey, agrees with that strong sentiment. When was asked during an interview what he thought of pineapples on pizza, he asked in return: “Would you put pineapple on lahmacun?” Fair comparison or not, there is no denying that pineapple goes best with something salty. Many prefer ham, but olives could also balance the sweetness and be a vegetarian option.

The first seafood that comes to mind is probably tuna. Owing to its relatively mild and neutral flavor, it goes well with many different toppings. One example is lemon.

Anchovies have a stronger flavor compared to tuna and are on the fattier side – one reason why you shouldn’t go overboard with them, especially if you want to avoid heartburn.

Shrimp and scallops are also a popular choice and work really well together with their mild taste. You can combine anchovies with them for good measure and a true seafood extravaganza.

Fruits may not be the most popular choice, but figs definitely don’t get treated as harshly as pineapples. Figs, in general, hold their juices and, as they are often paired with cheese, it makes sense to add a few slices to the cheesy bread that is pizza.

Mozarella is not a salty cheese and if you don’t want to directly put salt onto your pizza you can opt for olives. If your olives are overly salty, you can rest them in water to draw much of it out. Change the water after a few minutes and put them in water again if need be.

Don’t forget; consuming too much salt is harmful to your body, the reason why Turkey is aiming for a daily salt consumption of under five grams. When I last ate a pizza in Germany after spending years in Turkey, I was shocked by the amount of salt, to say the least.

This is one trend I’ll never understand. Gold, the edible kind, has zero taste, and as the body doesn’t absorb it, it'll pass through you and you'll poop gold. But that doesn’t stop some pizza bakers from making it, such as a Turkish chef baking a 24-carat gold pizza.

From mushrooms to onions, many vegetables go perfectly on a pizza. But one needs to consider if they need some preparation beforehand. Onions, for example, should either be sliced very thinly to make sure they aren’t crunchy or sauteed beforehand to soften.

Broccoli is one of those toppings that pleasantly surprise. When added raw on top before baking, it’ll keep its structure but still cook well. Mushrooms should also be placed raw on a pizza.

Pepperoni, sucuk (spicy Turkish sausage), bacon, beef, pastırma (Turkish cured beef) ... the possibilities are endless. You’ve likely come across maximalist pairings such as döner kebab and pizza, and despite objections, it just works. One warning about cured meats though: they contain a lot of salt and you should avoid overdoing it.

How to bake a pizza

The making of pizza is an art, no doubt. Considering most of the population does not have a stone oven, here’s how to make do.

Warm up the milk or water and melt the yeast in it with the sugar. Wait five to 10 minutes to get it activated. Put the flour, activated yeast mix, salt and olive oil into a bowl and start kneading. You’ll want to knead until the dough is no longer sticking to your hands. If you are not quite sure if you have achieved that, wash your hands and then touch the dough. If it doesn’t stick it should be done. Dust the dough a bit with flour, cover with a damp cloth and let it rest in a warm spot for about an hour.

Meanwhile, peel and chop the garlic as finely as possible. If you have garlic powder, you can use that as well. Add garlic to the crushed tomatoes or tomato sauce and add spices to your liking. Thyme is an absolute must but other spices will enhance the flavor. Do not be afraid to taste the sauce. If it seems like the sauce is just a bit too thick, you can add a bit of water to thin it out.

Preheat your oven to a minimum of 200 degrees Celsius (390 degrees F) and a maximum of 220 degrees. When the dough has risen, knead it one more time and separate it into two. Dust your work surface with flour and roll the dough out as thinly as possible. You can raise the dough with your hands and pull it as well. The thinner, the better! Place the dough on your baking tray, spread the sauce and your toppings and chuck it into the preheated oven. Let it bake until the corners have darkened and the cheese has melted. Enjoy!

If you want to be extra safe, put baking (parchment) paper onto your baking tray to stop the dough from sticking.

To get an extra crunchy dough, get your hands on a pizza stone or an oven-safe griddle. It is a bit tricky but the dough will bake faster when placed on top, making for a thin and crunchy bottom. If you don’t want to invest in this, you can heat up your baking tray before placing the dough on. After that, spread the sauce and bake it for 5-8 minutes, remove the pizza and then put all the toppings on. It will need some finesse and good knowledge of how your oven behaves.

How to make Lahmacun

As much as Turks love to order this classic from the southeastern provinces Şanlıurfa and Gaziantep, it became one of the most searched recipes during lockdowns when people sought home-baked goods.

I can’t blame them because while pizza is great, it is quite heavy with all the dairy. Lahmacun's dough is also very thin and the topping is spread just as thinly over it. But just like its European cousin, it needs skilled hands to be rolled out as thinly as possible. Even if it does not turn out as great as the chefs do it, I can guarantee you that it’ll taste amazing.

Add all the ingredients for the dough into a bowl and knead for at least 10 minutes. Let it rest for about an hour in a warm place.

Chop all the ingredients for the filling and knead them together. Preheat your oven to 200 C but turn it to grill mode.

Once the dough has rested, separate the dough into equal pieces (six to eight depending on the size of your pan) and roll them out as thinly and evenly as possible. Carefully spread the filling all over the dough and cook the lahmacun first on a pan until the downside starts getting a bit of color. After that, take your Turkish pizza and put it into the oven for about 10 minutes or until the crusts of the lahmacun turn a golden brown color. Remove from the oven, fold in half and cover it with a cloth. Once you have baked all, they should still be warm. Serve with some parsley (the other half of the bundle, if you will) and enjoy.

You can cover your dough bowl with a towel and plastic bag to generate more heat.

Adding all kinds of vegetables to your baked lahmacun is absolutely delicious. Adding lettuce and fresh tomatoes are great and finishing it off with a squeeze of lemon will add another layer of flavor.