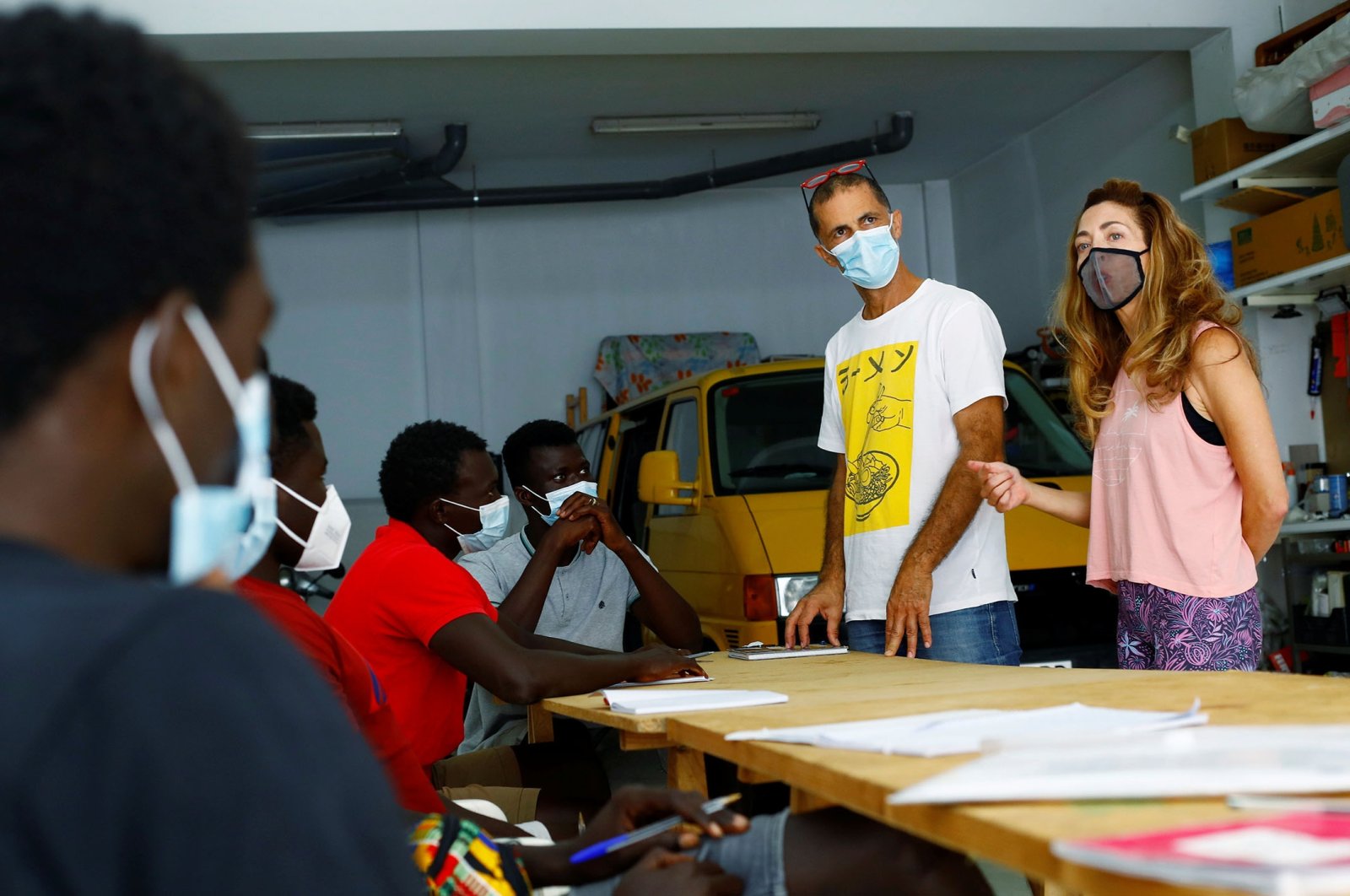 Isabel Florido (R) and Tito Martin teach Spanish classes to a group of Senegalese migrants who arrived on the island by boat, in Las Palmas, on the island of Gran Canaria, Spain, July 21, 2021. (Reuters Photo)
by Reuters Jul 26, 2021 2:39 pm
RECOMMENDED

Immigrating from your homeland to a foreign country with different people boasting alien cultures is hard enough in itself, but what makes the whole affair miserable for the most part is the language barrier. In order to circumvent this hurdle, a local man in Spain's Canary Islands, where authorities are struggling to accommodate a sharp rise in the number of undocumented migrants arriving on its shores, has transformed his garage into a classroom to teach immigrants the Spanish language.

Between January and mid-July, 7,260 people landed on the Canary Islands in the Atlantic after making the perilous sea journey, compared to 2,800 in the same period last year, according to the Spanish Interior Ministry.

Authorities attribute this increase to the impact of COVID-19 on tourism and other industries in north and sub-Saharan Africa, pushing many more to leave home in search of a better life in Europe.

Tito Martin, who lives in Las Palmas de Gran Canaria, was inspired to start his makeshift language school after noticing there were not enough resources for the growing number of migrant arrivals.

"I thought it was time to stop just agreeing with news and commentary about the (migrant) situation and decided to take action," he said.

With arrival facilities in the region packed to capacity, authorities have housed thousands in camps where conditions have been criticized by rights groups.

In Martin's garage, among his van, bikes and a surfboard, a group of young men sit at wooden desks diligently writing down their Spanish alphabet and sounding out the letters.

"I want to learn Spanish. Before I lived in Senegal, I had never been to school, I didn't know how to read," said Mar Low, 25, who arrived on the Canary Islands eight months ago and now attends Spanish lessons three times a week.

Low spent 14 days at sea – five without food or water – before his boat was picked up by a Spanish rescue ship. "If they hadn't helped us we would all have died for sure," he said.

Isabel Florido, a local French and English teacher, got in touch with Martin when she heard about his scheme and is now one of a group of volunteers who teaches Spanish.

"I'm a conscious person, aware of what's going on around me and the reality is that ... my island is suffering right now, I care about it," she said.

Marin offers migrants a safe haven – somewhere they can shower, grab a bite to eat and learn Spanish.

"What I have had first and foremost from the boys is gratitude, in spite of their desperate situation," he said.