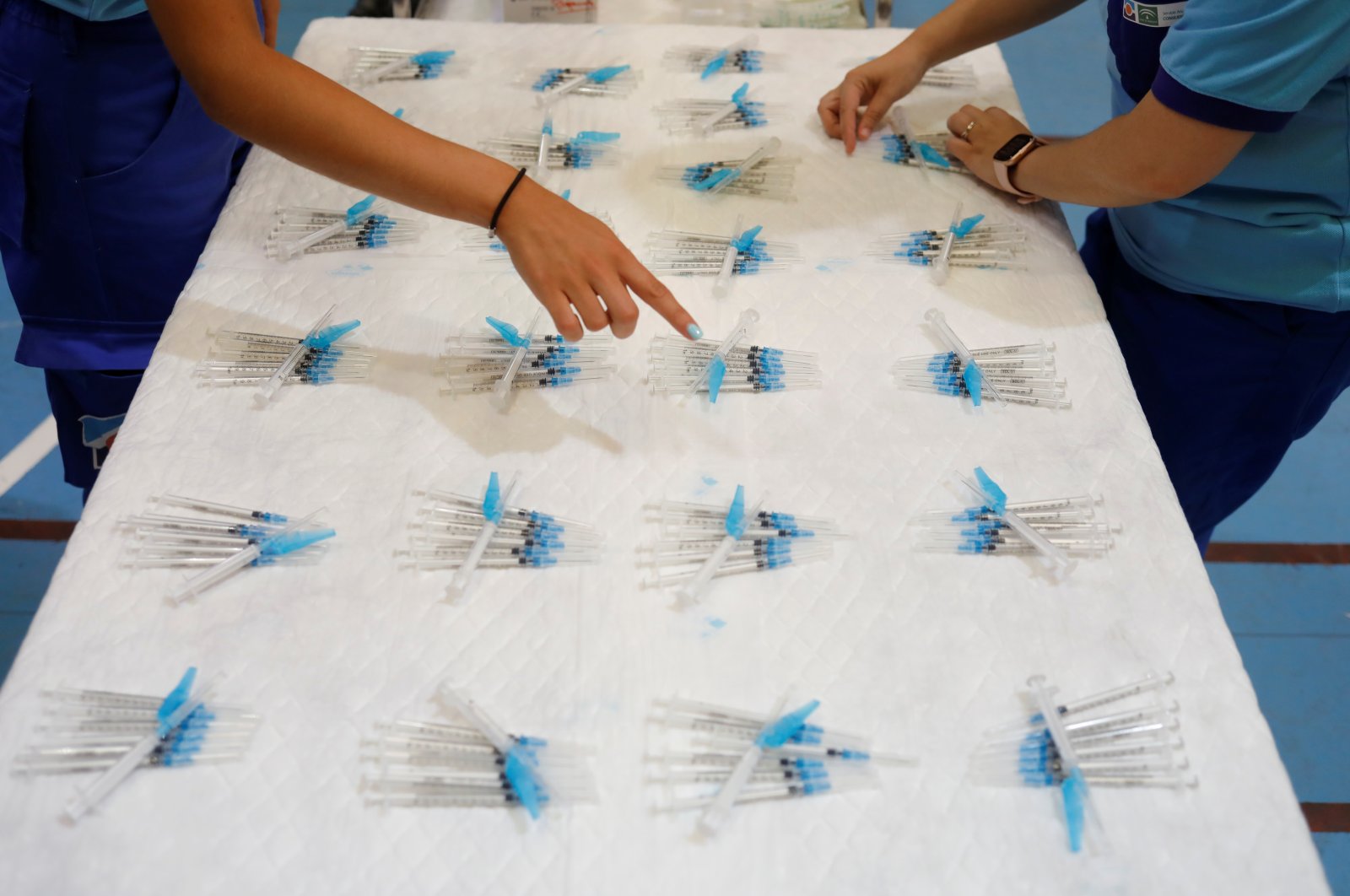 Healthcare workers prepare syringes to be filled with the Pfizer-BioNTech COVID-19 vaccine at a vaccination center in Ronda, Spain, June 30, 2021. (Reuters Photo)
by Reuters Jul 04, 2021 10:55 am
RECOMMENDED

This week's roundup of the latest scientific research on the novel coronavirus and efforts to find treatments and vaccines for COVID-19 suggest that the mRNA vaccines offer protection for long periods, AstraZeneca offers better immunity with a booster shot of Pfizer-BioNTech's vaccine and the virus itself is linked with facial nerve paralysis, not the vaccines.

The tiny "factories" in lymph nodes that churn out antibody-producing B cells to fight infections, called germinal centers, were still functioning to hold COVID-19 at bay for months after people received the mRNA vaccine from BioNTech and Pfizer, according to a new study.

After most vaccines, germinal centers last only a few weeks. "Germinal centers are the key to a persistent, protective immune response," said Ali Ellebedy of Washington University School of Medicine in St. Louis, who coauthored a report Monday in Nature.

"Germinal centers are where our immune memories are formed. And the longer we have a germinal center, the stronger and more durable our immunity will be because there's a fierce selection process happening there, and only the best immune cells survive."

"We're still monitoring the germinal centers, and ... in some people, they're still ongoing," Ellebedy said. "This is truly remarkable." The same effect is likely also true for Moderna's mRNA vaccine, the researchers believe. Ultimately, immune cells called T cells are what sustain the germinal centers' work after they disappear.

The researchers plan next to investigate the magnitude and durability of T cell responses after mRNA COVID-19 vaccines.

In a study of 830 older adults, mixed two-dose schedules of AstraZeneca and Pfizer-BioNTech vaccines produced higher concentrations of antibodies against the coronavirus than a full schedule of the AstraZeneca shot. The most effective approach – two doses of the Pfizer-BioNTech mRNA vaccine – produced levels of antibodies about 10 times higher than two doses of the AstraZeneca vaccine, the researchers reported Friday in a Lancet preprint.

There were no new safety issues uncovered in the study. Matthew Snape, the Oxford professor behind the trial, said the findings could be used to give flexibility to vaccine rollouts but were not significant enough to recommend a broad shift away from clinically approved schedules.

The Pfizer-BioNTech vaccine has not been linked with a higher risk for the facial nerve paralysis known as Bell's palsy, but COVID-19 itself does increase the risk, suggest two separate studies published Thursday in JAMA Otolaryngology-Head and Neck Surgery.

One study involved 110 people in Israel who received the Pfizer-BioNTech vaccine, including 37 in whom the characteristic facial droop developed on average nine days after the first dose or 14 days after the second. After accounting for underlying risk factors for Bell's palsy, the researchers concluded the vaccine itself did not increase the risk.

Furthermore, they found, rates of Bell's palsy had not gone up during the vaccine rollout.

In the second study, researchers compared Bell's palsy rates among roughly 348,000 patients with COVID-19 and roughly 63,500 people who had been vaccinated against the coronavirus. The Bell's palsy risk was nearly seven times higher in those with COVID-19, they found.

"Our data suggest that rates of facial nerve palsy are higher in patients who are positive for COVID-19, and this incidence exceeds the reported incidence of Bell's Palsy with the COVID-19 vaccine," said Dr. Akina Tamaki of University Hospitals Cleveland Medical Center, who coauthored that study. "Taken together, it supports that the vaccine is safe from a facial nerve paralysis standpoint."