Members agree to 'ensure sustainable financing' for WHO 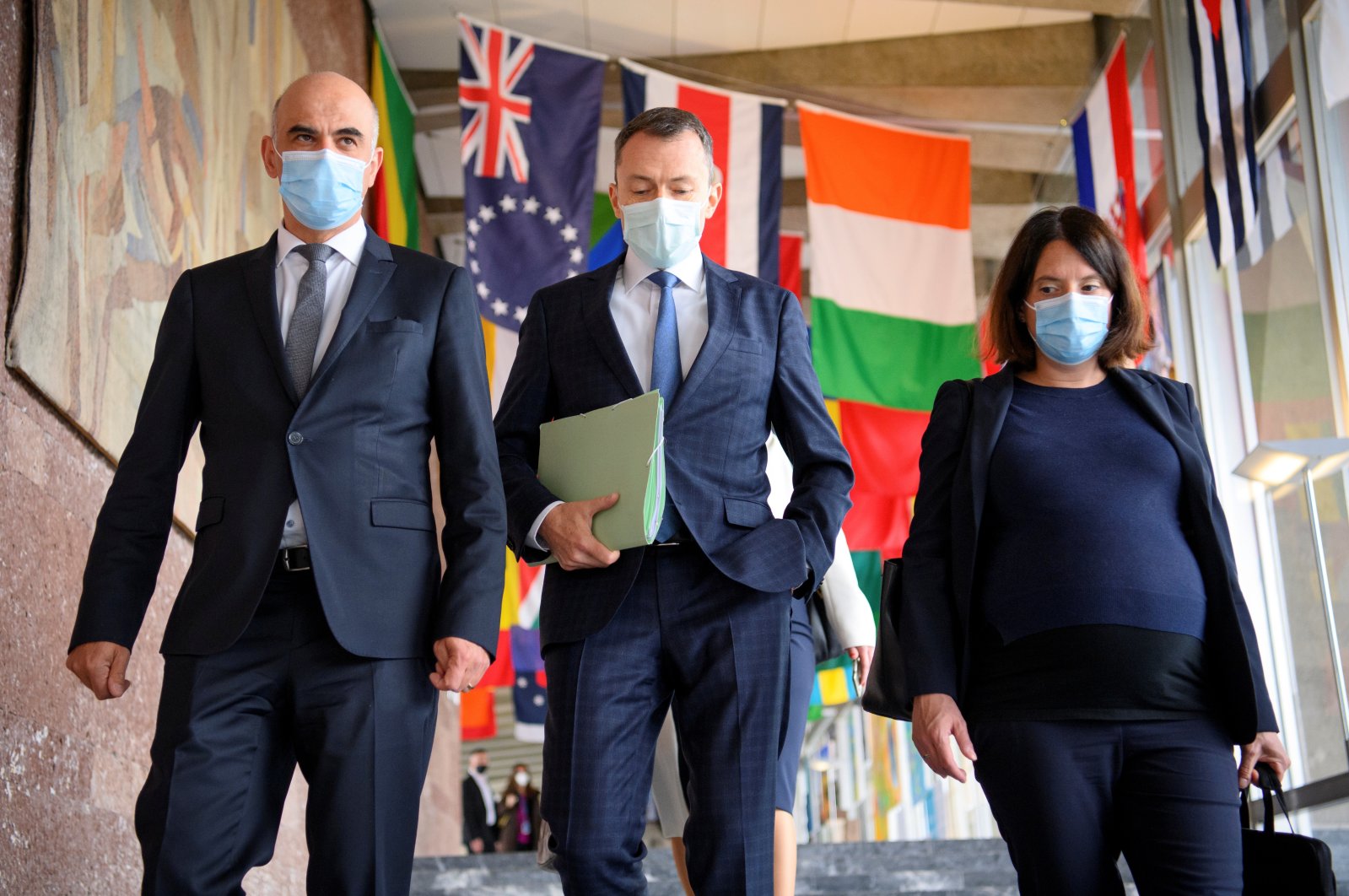 (L-R) Swiss Interior and Health Minister Alain Berset walks with the Swiss ambassador and permanent representative of Switzerland to the United Nations, Juerg Lauber, and Swiss Ambassador Nora Kronig Romero, the head of the International Affairs Division and vice director of the Federal Office of Public Health, before speaking at the opening of the 74th World Health Assembly at the World Health Organization headquarters, in Geneva, Switzerland, May 24, 2021. (Laurent Gillieron/Pool via Reuters)
by French Press Agency - AFP
May 31, 2021 8:31 pm

Member states of the World Health Organization agreed to provide additional financial security to the United Nations group in a resolution on Monday so that it will not be as dependent on project-based donations.

Many of the details of the concrete measures needed have been left to a future date, as members continue to debate how much power to cede to the United Nations body.

But WHO chief Tedros Adhanom Ghebreyesus hailed the resolution passed on the last day of the U.N. health agency's annual meeting of its 194 member states as "historic."

"The world needs a stronger WHO at the center of the global health architecture," he said.

A year and a half after the start of the COVID-19 pandemic that has killed more than 3.5 million people – a preventable disaster some experts contend – member states agreed to strengthen the organization at the heart of the global response to the crisis.

The 14-page resolution adopted Monday vowed among other things to remove the uncertainty around the organization's funding.

Member states committed to "ensure the adequate, flexible, sustainable and predictable financing of WHO's program budget."

Only about 16% of the agency's budget currently comes from regular membership fees. The rest comes coming from voluntary contributions which are heavily earmarked by countries for particular projects.

The WHO has taken heavy criticism for tiptoeing around China, a major contributor to the group. A team of scientists was sent to Hubei province where the coronavirus first immerged to investigate its origins but they were met with heavy resistance from Beijing. In its final report, written jointly with Chinese scientists, the group said it was "highly unlikely" to have come from the Wuhan Institute of Virology, saying instead that animals were the source. A couple of days later, Tedros said there was a need to revive the COVID-19 lab leak theory after pressure from the West.

Tedros pointed out that even in the midst of the crisis, low and uncertain funding levels had meant programs were being planned "in a debilitating cycle of financial ebb and flow."

"(The) WHO cannot grow stronger without sustainable financing," he said in closing remarks to the 74th World Health Assembly, which was held virtually over the past week.

"We cannot pay people with praise."

With Monday's resolution, countries also agreed to "strengthen (the) WHO's capacity to rapidly and appropriately assess disease outbreaks" of possible global concern.

But they put off deciding most of the steps required, and some members are resisting moves to hand more power and independence to the WHO for fear it might encroach on their sovereignty.

They decided to create a new working group to study and streamline numerous recommendations presented by three independent panels, and create concrete proposals for next year's assembly to consider.

The expert panels had painted a bleak picture, finding that countries and institutions had been woefully unprepared to deal with COVID-19.

They called for a total overhaul of the global alarm system, and for a stronger, more independent WHO to help avert future pandemics.

Monday's resolution called on all countries to increase their ability to detect new threats and to communicate such threats effectively at home and abroad.

To ensure all nations do their part, the resolution asked Tedros to consider creating a pilot project in which countries would submit their pandemic preparedness plans to regular peer reviews by other member states – just as they undergo reviews of their rights situations before the U.N. Human Rights Council.

The resolution stopped short of explicitly backing the experts' recommendation to hand the WHO broader powers to launch investigations or communicate about health threats without waiting for a green light from the countries concerned.

The member states also decided to put off until November discussions about whether or not to move towards creating an international pandemic treaty.

Tedros urged countries to "seize the moment," insisting a treaty on pandemic preparedness would go a long way to "strengthen both (the) WHO and global health security."

"We need a generational commitment that outlives budgetary cycles, election cycles and media cycles," he said.

"Other crises will demand our attention and distract us from the urgency of taking action," he warned.

"If we make that mistake, we risk perpetuating the same cycle of panic and neglect that has led us to the point."