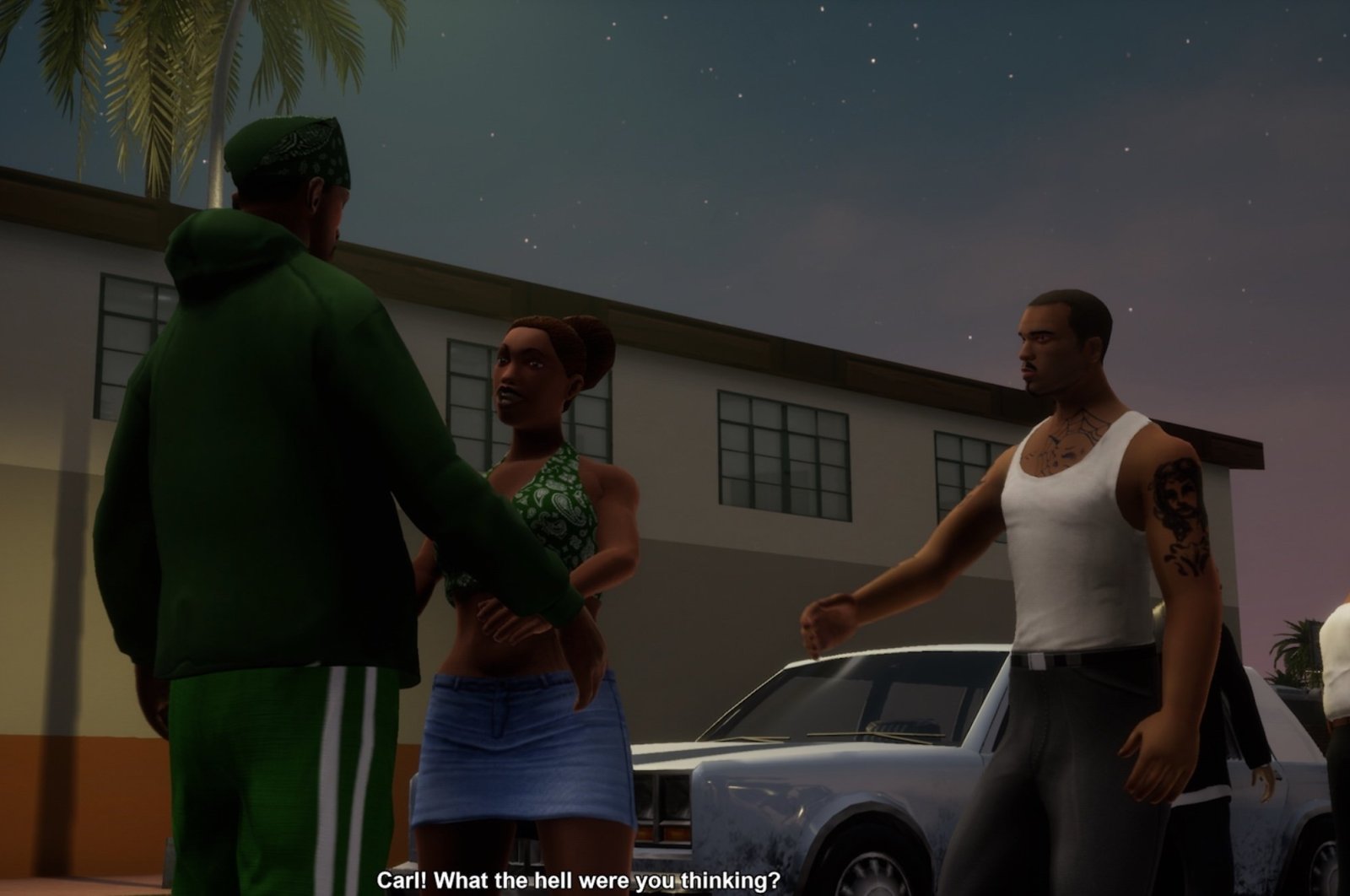 You're right, Kendl, that's a question that Rockstar should be asked too. (Screenshot by Emre Başaran)
by Emre Başaran Nov 29, 2021 7:56 am

Rockstar Games has recently suffered arguably the worst hit to its reputation after the total mess that is Grand Theft Auto: The Trilogy – The Definitive Edition was released. Now that they have a total train wreck in their hands, modders have once again come to their rescue, risking another backstab in the form of lawsuits

Any type of love, if it’s not platonic, requires some effort.

If you’re in a relationship, you have your responsibilities toward your partner as they do toward you. If you’re a fan of a musician, for example of Dr. Dre, who is rumored to be working on new songs for "A GTA title," you’re supposed to not pirate their music and listen to their songs legally; and the musician is expected to keep up the good work, not steal anyone else’s art or pretend they’ve created it. Or, if you’re a fan of a football team, you’re supposed to support your club by whatever means necessary in exchange for footballing success and pride.

You understand what I’m getting at, right?

But the worst is yet to be said: Then, there are cheaters. Partners who not only fail to uphold their responsibilities in a relationship but also cheat on you. Professionally, there are musicians who not only steal other artists’ work but also fail to respect their fans, and football clubs that become champions through matchfixing but also deny what they did and pretend that they are innocent.

And there is Rockstar Games, which has not only disregarded their diehard fans’ efforts to make Grand Theft Auto games better over the last 20 years for literally zero dollars, but has also sued them for their last nickel and dime.

But some modders are so devoted to GTA that even the utterly unacceptable and unethical behavior of its creator cannot deter them, and they continue to serve the community despite all the risks that their back-breaking efforts in exchange for no monetary gain pose to them. This includes getting sued as a child of a middle-income family by a mammoth corporation worth billions of dollars, that is.

Everything started with the announcement of the new GTA Trilogy. People were suspicious, and it was immediately perceived as a money-grabbing attempt by Rockstar. A move to, let me put it straightforwardly, abuse the nostalgic feelings hardcore fans have toward the old but gold trilogy. In an announcement, Rockstar said that GTA 3, GTA: Vice City and GTA: San Andreas would all be part of the bundle, and we would supposedly enjoy quality-of-life improvements such as a better map and navigation system, better graphics and lighting effects, better mechanics, especially in driving and gunfight – two of the most fundamental tenets of any GTA game.

I was suspicious myself, but as a diehard fan of the series, especially since I had spent half my life playing GTA: San Andreas, I was a little hopeful. Just a little, at least.

But Rockstar Games has managed to surprise even me, who had literally zero expectations about the new trilogy. Disappointing someone who has no expectations is a tough job, a hard duty that Rockstar apparently excels at.

The games were a total mess. The absolutely broken rain effect, which literally rendered the game unplayable, made you pray for sunlight (pun intended). The omission of GTA: San Andreas’ signature fog made things even worse, immediately killing off the immersion and sense of inter-city travel. The weird white outlines on non-playable characters made it look like a mobile game that sells for a dollar. Add countless more bugs and glitches to this recipe, and you have the new GTA: Trilogy.

After finally understanding how much they had messed up, Rockstar Games issued an apology to its fans – a meaningless move for many considering that Rockstar’s parent company Take2 Interactive was suing yet another innocent modder every minute.

We want to provide an update regarding the unexpected technical issues that came to light as “part of the launch of Grand Theft Auto: The Trilogy – The Definitive Edition. Firstly, we want to sincerely apologize to everyone who has encountered issues playing these games,” Rockstar said in its apology.

“The Grand Theft Auto series – and the games that make up this iconic trilogy – are as special to us as we know they are to fans around the world. The updated versions of these classic games did not launch in a state that meets our own standards of quality, or the standards our fans have come to expect,” it added.

“We have ongoing plans to address the technical issues and to improve each game going forward. With each planned update, the games will reach the level of quality that they deserve to be,” Rockstar also underlined. To give the devil its due, they have just released an update for the trilogy, which has fixed many issues and made the Nintendo Switch version at least remotely playable now. That's a console that runs Zelda, Astral Chain, Dying Light, Doom Eternal and others. Three games from the early 2000s should be child’s play for it – if Rockstar would invest some money on optimization, of course.

“A new Title Update is on the way in the coming days for all versions of Grand Theft Auto: The Trilogy – The Definitive Edition that will address a number of issues. We will update everyone as soon as it is live. In the meantime, it pains us to mention that we are hearing reports of members of the development teams being harassed on social media. We would kindly ask our community to please maintain a respectful and civil discourse around this release as we work through these issues,” the company added. Of course, such inhumane attacks and harassment against any game developer are utterly unacceptable – as we saw in the example of Cyberpunk 2077.

“While one of the goals of the Definitive Editions was to allow players to enjoy these games on modern platforms for many years to come, we also understand that some of you would still like to have the previous classic versions available for purchase. We will be adding the classic PC versions of Grand Theft Auto III, Grand Theft Auto: Vice City, and Grand Theft Auto: San Andreas back to the Rockstar Store shortly as a bundle,” they added, correcting another mistake. Removing classic titles from the stores was a horrible idea from the start.

“Additionally, everyone who has purchased Grand Theft Auto: The Trilogy – The Definitive Edition for PC from the Rockstar Store through June 30, 2022, will receive these classic versions in their Rockstar Games Launcher library at no additional cost. We will update everyone as soon as these are back in the Rockstar Store,” Rockstar added, in a nice gesture.

“Once again, we'd like to thank everyone for their patience and understanding while we work through these updates to ensure these games meet everyone's justifiably high standards.”

Instead of having to write such a letter of apology, Rockstar Games should have focused on making the GTA Trilogy a much better experience with all the modern technology and optimization capabilities they have. Porting three early 2000s games into modern consoles with just a little facelift? It’s not a huge deal for a company like Rockstar. Nevertheless, it shouldn’t have been a problem for Grove Street Games, the game developer that Rockstar outsourced the remastering work to. If a company like Rockstar is behind you, you’re supposed to have access to a ton of resources – if Rockstar wants you to do a good job anyway. I think the culprit is clear: Rockstar itself.

Modders won’t give up

A simple Google search will introduce you to the world of GTA mods, so I don’t want to spoil the thrill of discovery for you. And it’s a grey area too – so better keep safe here.

But let me tell you, the new mods make the new GTA Trilogy absolutely fantastic. The signature fog is back, draw distances are improved, horrible white lines are gone, many glitches are fixed, the horrendous rain effect is back to normal and it now looks super realistic and well-made. Character animations, face models, low-quality textures have all been resolved.

Why do those modders risk lawsuits from Take2, considering that it sued countless modders of old GTA games just in time for the new trilogy’s release?

Because they love GTA. And as technically capable fans of the series, they must be feeling some kind of responsibility toward their community. Just like CJ told Officer Tenpenny: “Just doing my part for the community.”

Will Take2 sue these modders too? Will their greed for every nickel and dime in their fans’ pockets extend to never-before-seen levels with more lawsuits? We will see.

But let me tell you, Rockstar’s going to end up with a tarnished reputation after all this fuss is over. A reputation that it struggled decades to build now faces the threat of serious damage if not total annihilation.

What happened to “4 life,” Rockstar?

Just like Sweet said back in the day, “Everybody blasts on fools first, then asks questions second.”