Travels of a solo Pakistani girl: The Mediterranean jewel of Kaş 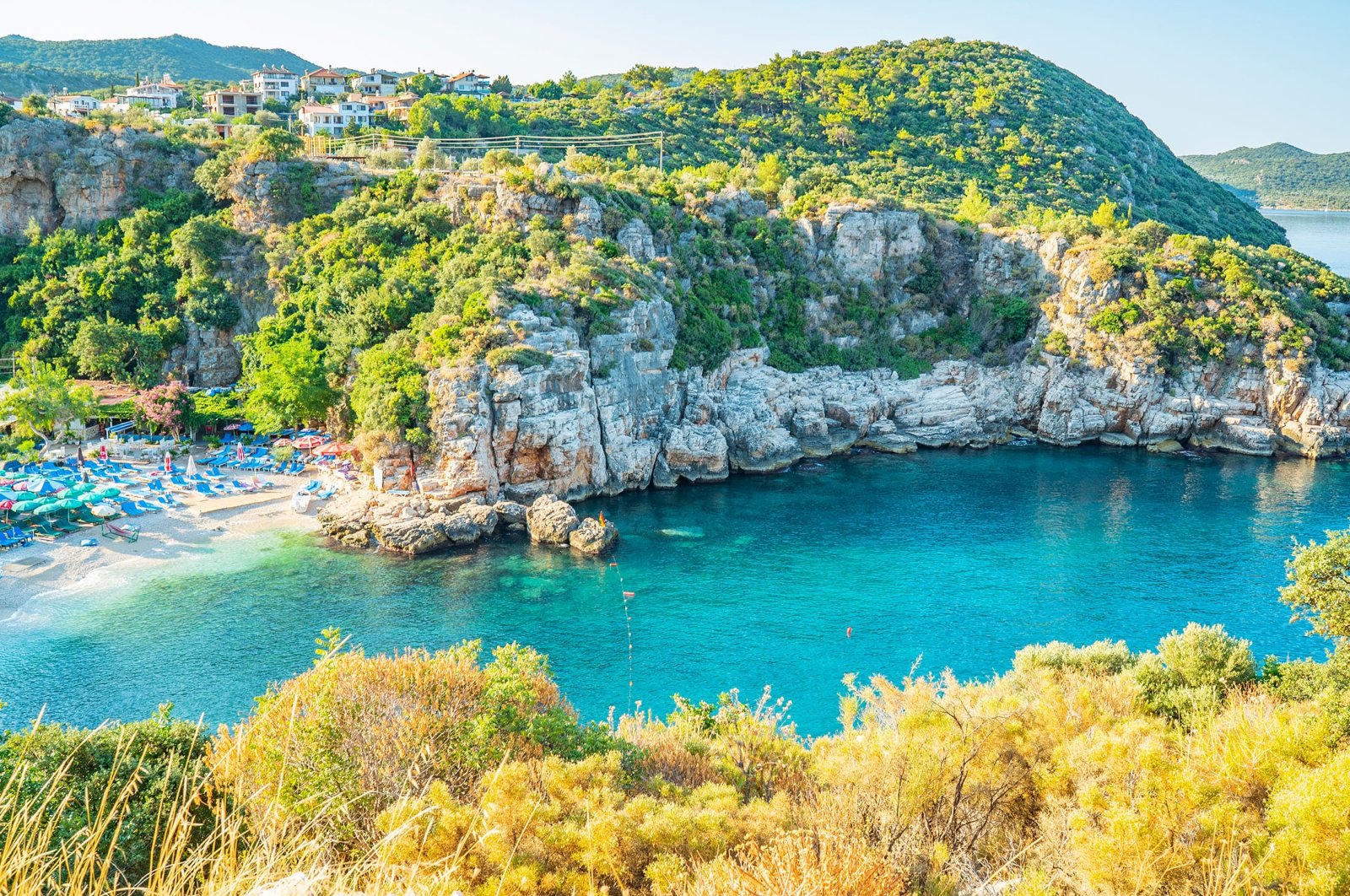 My early morning flight from Ankara landed at Dalaman airport just over an hour later. Outside, I headed toward the shuttle buses that would take me as far as the Fethiye bus station; from there, I would have to change vehicles and find the one headed to Kaş.

To the Turquoise Coast

The route from Dalaman to Fethiye is a nature lover’s dream. It winds up and down enormous mountains, every inch of which is covered with the greenest trees. The scenery is almost unbearably beautiful, and it dominates most of this coastal area where the mountains descend into the sea. Great swathes of this were devastated by the recent wildfires that swept across Turkey, a blow to the well-preserved natural habitat and its denizens.

At Fethiye, we missed the bus by no more than 5 minutes, and it meant a couple of hours’ wait before the next one. The Fethiye bus station is right in the middle of town in a commercial area full of shops and restaurants, and at a short walk from many residential neighborhoods. You can deposit your luggage at the ticket office and spend some time exploring them. The station itself is quite basic, with a couple of small cafes to grab some snacks.

The two-hour bus ride from Fethiye to Kaş, though equally beautiful, is a fairly different experience. The wide highways quickly give way to smaller roads leading to settlements along the sea. As the bus rolled through the narrow confines of these villages, it provided an interesting, if fleeting, glimpse into the small towns along this coast. Just over an hour after we had departed, the bus turned a corner of one of these enormous mountains, and all of a sudden, we were face to face with the Mediterranean Sea. Imagine driving on a road with a towering mountain on one side and the bluest ocean on the other, the bright sun reflecting off the waves creating the illusion of thousands of mirrors floating into oblivion. The only way I could describe the color of the sea from this vantage point was "ink blue," an almost ominous dark hue.

Eventually, we found our way to Kaş. I disembarked at the station and decided to walk the seven minutes to my hotel. This turned out to be a wide cobblestone pathway leading straight into the town center, less than a 30-second walk away from the main square and the harbor. I checked in, freshened up, and headed straight back outside. Having traveled the entire morning, I took a relaxed seafood lunch at one of the restaurants right in the middle of the square, a very popular establishment judging by the number of returning patrons the owner was obviously familiar with.

When I decided to visit Kaş, I had expected a touristic seaside village with a quiet ambiance. To my surprise, it was hugely crowded, mostly with Turks who had come down for the weekend, with a very happening nightlife. It felt very commercial, even for such a small town, but it was easy to understand why it was so popular. Gourmet food, proximity to the Mediterranean, and a vibrant local culture made it the destination of choice for anyone seeking to kick back and let loose.

Diving into the Mediterranean

The next day, I had booked a boat tour, which meant eight hours of cruising around the Mediterranean. I had a quick breakfast and reached the pier just after 9 a.m. Making my way to the upper deck, I joined the other passengers and settled into a lounge chair. Before long, we had left and the Kaş shoreline quickly became a distant memory as we made our way to the first of several small islands dotting the surrounding waters.

Some of these were merely a series of hillocks nestled close to each other; others were settled places, if sparsely. At each spot, we would lower anchor while everyone jumped into the waters for a refreshing swim or snorkel, before returning upstairs to towel off and stretch out under the sun again as we made our way to the next destination. Each of these mini excursions was interspersed with commentary by the captain, describing the geography and historical significance of our surroundings. Lunch was also served onboard.

Of sunken cities and protected islands

The sunken ruins of Kekova Island, also known by its ancient name Simena, were one of the highlights of the excursion. Once home to the ancient Lycians, it was struck by a series of earthquakes in the second century A.D. and sank beneath the waters. Today, the remains of this trade city can be seen by boat, albeit from a distance. Designated as a protected region, chartered boats are permitted to cruise a few meters off its shoreline, allowing glimpses of its past; all other activities such as jet-skiing, snorkeling, diving and even swimming in these waters is prohibited by law. As our boat cruised past, we could clearly make out the foundations of public buildings and a shipyard just below the calm waters. Above the shoreline, our captain pointed out the ruins of houses, an ancient church and some tombs.

Situated opposite Kekova is the island of Kaleköy, a part of Antalya’s Demre district. This charming village is home to a mere 120 or so residents. Our boat pulled up to the pier and we were told we had an hour to look around. The first thing that hits you about it is a pervasive quiet. It is actually possible to sit at one of the restaurants near the harbor and hear nothing but the gentle breeze and the waves lapping at the shore. This is not to say there is a lack of activity. The locals invite you into their establishments the minute you cross onto dry land and you have your choice of where to sit. I climbed up a few steps and an elderly lady asked me into her cafe, a large room paneled in wood looking out over the blue waters. I had some refreshing lemon ice cream (unfortunately, they were out of peach and cactus flavors) before heading back down. While some of our number decided to climb all the way to the castle ruins at the top, I chose to explore the area beneath and get a feel of local life.

The streets were exceedingly narrow and dotted with pomegranate, orange and lemon trees. Along the way, there were small recessed areas hidden between enormous bougainvillea shrubs, where the local women were selling handmade crafts; these included crocheted dresses, handwoven hats, sachets of lavender, shell jewelry and many more. A few restaurants, reputed for selling excellent seafood, dotted the harbor; other smaller establishments, mainly operating out of stone houses, sold lemonade and ice cream, perfect for cooling off. Tourism appeared to be the mainstay of the island and the main source of earning in summer.

All too soon, it was time to leave and we headed back to our boat. On the way back to Kaş, we stopped at a couple more islands, all uninhabited, seemingly no more than rocky outcroppings rising up from the deep blue, and dotted with the lushest green trees. As I sat lazily on my lounge chair gazing out at them, something about the way their leaves rustled in the insistent breeze immersed me in the deepest sense of awe. Here they were, miles and miles from habitation, having only ever been witnessed by a mere handful of people; and yet that did not stop them from existing, from being full of life and exuding beauty. It struck me with an unusual force that beauty did not have to be witnessed by anyone for it to exist.

Alas, we were soon anchors aweigh and headed back to where we had come from. By now, the wind rushing past us as we surged through the sea had turned considerably cold; we reached the shore just before sundown. It was a quick walk back to the hotel to freshen up. I didn’t feel up to having dinner so I made time for dessert – baklava with ice cream – and then turned in for the night.

The next day, Sunday, everything was closed due to the weekend curfew and restaurants were only serving take-away. I decided on a quick jaunt around town, ending with a stop at the bus station to reserve a seat for my trip back to Dalaman. From Dalaman, I would be flying to Çanakkale via Ankara, and would be arriving at my destination late at night. Since the entire day would be spent traveling, and with not much to do as the town was largely shut down, I took the day to catch up on some chores and relax. Lunch and dinner consisted of lasagna and pesto spaghetti, respectively, from the most outstanding Italian eatery in Kaş, "SpaghettiCi."

The next morning, I had an early morning departure. The entire way back to Dalaman, I tried to drink inasmuch as I could of the spectacular scenery, grateful for having been able to witness it in all its glory. Hours later, I landed in Çanakkale and checked into my hotel just past midnight. This would be just a one-night stay, and the departure point for my next destination, the island of Bozcaada.