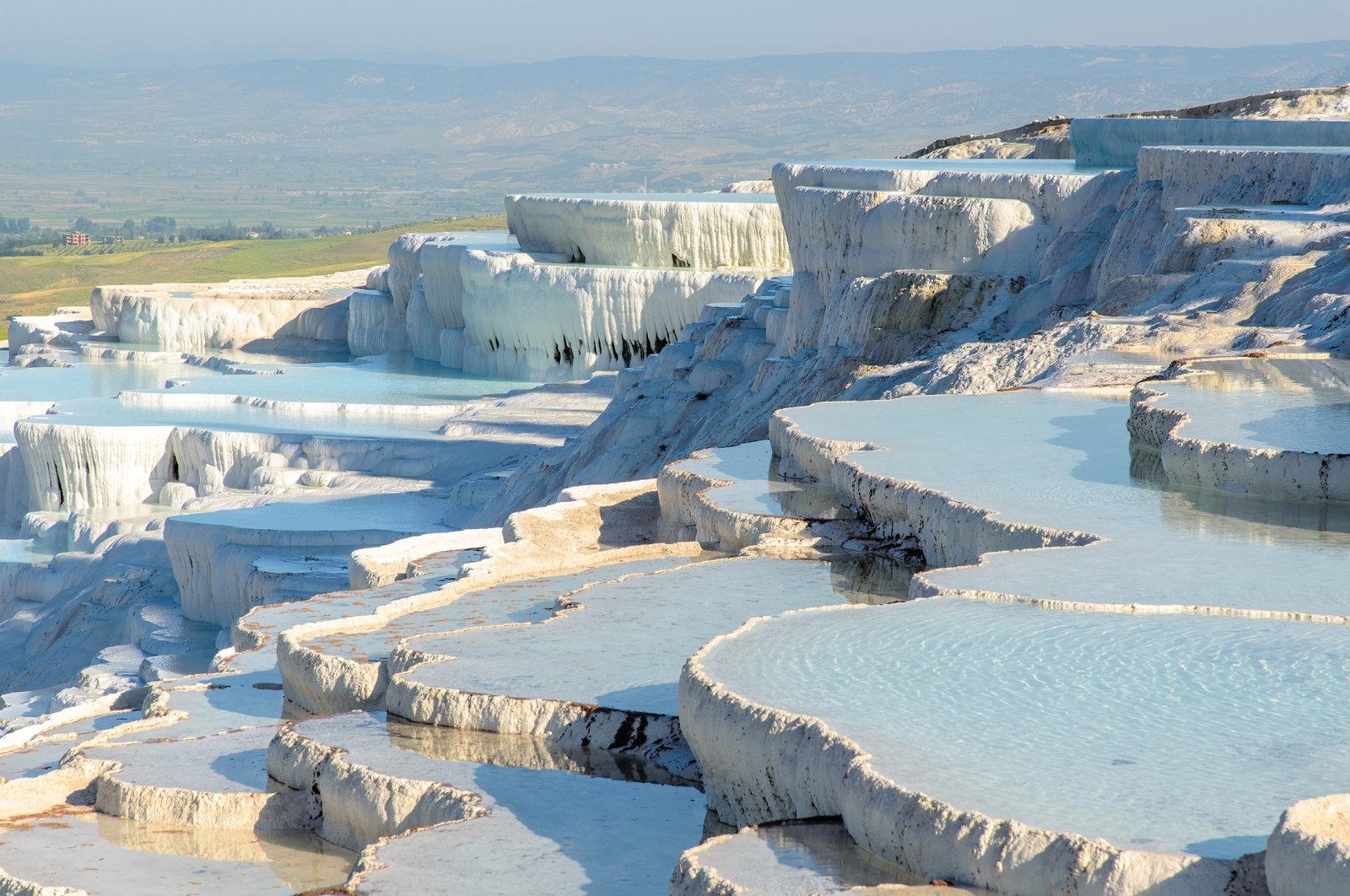 The view of thermal baths in Denizli’s Pamukkale in Turkey. (Shutterstock Photo)
by Leyla Yvonne Ergil Jun 03, 2021 9:39 am

Spanning two continents, surrounded by three seas, home to 18 UNESCO World Heritage Sights and two of the Seven Ancient Wonders of the World, it should come as no surprise that Turkey is an extremely photogenic country. Many are making their way to Turkey to scratch sites off their bucket list and take photos of the country’s most iconic destinations to mark their travels. Thus, the following is a list of the 10 top spots to capture the best Instagram content.

The thermal baths in Denizli’s Pamukkale, which rightfully translates into “cotton castle,” are a stunning vista of white travertine pools. Formed by underground volcanic activity that has catapulted hot springs into layered terraces of saucer-shaped pools, they are made up of calcium and minerals that resemble dripping candle wax. As much revered for their health benefits, these thermal spring travertine pools are an impressive spectacle, to say the least, and visitors are allowed (albeit barefoot) to walk through and even bathe in them. These stunning white calcified terraces have long been one of the most iconic destinations in Turkey for Instagram shots, coupled with the Hierapolis, which is an ancient spa city built by Romans in the second century B.C., equipped with an amphitheater and impressively preserved column walls that also serve as an excellent backdrop. On-site, there is also a fascinating archeology museum housed in an ancient Roman bath as well as “Cleopatra’s Ancient Pool,” an expansive thermal pool that was a gift from Marc Anthony to the Egyptian ruler. Yet another popular photo-op spot is the Temple of Apollo. During an earthquake in the seventh century, the columns supporting the temple that sat above the pool toppled, resulting in their being submerged in the thermal water, which these days allows visitors to swim amid the ancient ruins.

Top tip: Of the three entrances to Pamukkale, the north and south entrances not only open up earlier than the town entrance, but they are located at the top of the hill offering preferable vantage points.

No trip to Turkey for any social media posting fanatic would be complete without the now-iconic shot of colorful hot-air balloons soaring over the sky in Cappadocia. Known for its fairy chimneys lining a moon-like landscape formed by ancient volcanic eruptions and an open-air museum of dozens of carved-out underground cities equipped with cave paintings, Cappadocia is understandably a UNESCO World Heritage Site. Coupled with the more recent inclusion of colorful hot-air balloons dotting the skyline, this area in central Turkey is a photographer’s dream come true.

Top tip: The balloons take off at sunrise, so get there early. The most frequented viewing spot is Sunset Hill located directly above Göreme, however it can get crowded, but continuing on offers views of Rose Valley in more intimate settings. Love Valley has the added vantage point of balloons taking off, but happens to be against the light. To capture the colorful spectacle from a comfortable rooftop terrace while enjoying breakfast, the Sultan Cave Suites is the top spot in town.

One of the Seven Wonders of the World and considered to be the most marvelous by The Antipater of Sidon, the original creator of the list, Ephesus, in what is present-day Selçuk, is pretty much the most legendary spot in the world to be photographed. First built in 800 B.C. and then multiple times thereafter, including when it was burned down by Herostratus in an attempt to become famous which backfired as from there on after anyone who uttered his name would be sentenced to death. Truly the land of legends, while little remains of the Temple of Artemis, which garnered this ancient town its status, the facade of the Library of Celsus was re-erected making it one of the only remaining examples of a library from the Roman Empire and offering a truly awe-inspiring setting at that.

Top tip: Combine with a trip to the House of the Virgin Mary, the cavern inscriptions in the Grotto of St. Paul and the Locomotive Open-Air Museum for a wide array of photo ops.

One of the world’s deepest canyons with depths reaching up to 300 meters, Saklıkent gorge is spectacular, however, the approximately 4 kilometers trek in currents, it's not for the novice hiker, making conditions trying to secure the perfect photo. Make sure to take good shoes and a waterproof camera.

Top tip: Go early and do the gorge on your own rather than in a group. If the hike seems daunting, opt to while away the day at one of the platform restaurants sitting above the creek such as Saklıkent Restaurant Paradise Park and enjoy chilling out in one of their chair swings.

Istanbul’s legendary Grand Bazaar, a covered market with mazes of streets devoted to different categories of goods is not only the oldest, but also the largest shopping mall in the world. While pretty much every angle offers a photo op, from carpet to backgammon shops and streets of gold bangles and leather jackets, it is the avenue where the ornate and colorful mosaic glass lamps are sold that has become the optimal photo opportunity.

Top tip: Due to the popularity of posing amongst the array of shimmering colored glass for Instagram shops, do not assume you can do so for free and ask first and also be aware you may be charged or at least encouraged to purchase something.

Taking photographs within and in the courtyards of Istanbul’s magnificent mosques is par for the course for any visitor, especially those located in Sultanahmet, the city’s ancient touristic zone. Just keep in mind that from Hagia Sophia to the Blue Mosque, pretty much all of the mosques on your radar in Istanbul are fully operating for religious services and thus you may not be allowed entry 30 minutes prior to prayer times and not until the afternoon on Friday’s.

Top tip: If the Blue Mosque (Sultanahmet Cami) happens to be crowded, you can always make your way to the nearby Suleymaniye Cami, built by Mimar Sinan himself, for what also serves as a spectacular backdrop.

Known for its fantastic lush forest, cascading streams and wide variety of flora and fauna, the Kurşunlu Waterfall Nature Park feels like a world away from the traditional tourist trail in Turkey.

Top tip: Combine a trip to the Kurşunlu Waterfalls with a visit to the Düden Waterfalls and a ride by cable car to Tünek Tepe Mountain for panoramic views of Antalya’s sprawling Mediterranean coastline.

The swing shot at Yuvarlak Çayı’s Yeşil Vadi Restaurant in Muğla is fast becoming the latest photo capture trend in Turkey and rightfully so. The swing stands above an ice-cold creek and is accessible from this restaurant situated on platforms above the creek with pillowed seating.

Top tip: Prepare to be cold as despite whatever the temperature may be, the mountain spring that feeds this creek is bone-chilling. From there, pay a visit to Köyceğiz Lake, one of the vastest coastal lakes in Turkey.

From ancient rock tombs to a luscious reed-lined creek that leads into İztuzu Beach – one of the most important nesting areas in the world for caretta caretta and loggerhead turtles – there are a lot of memory-making moments to be had in Dalyan.

Top tip: Head to Radar Tepesi on the road to İztuzu Beach for a spectacular aerial view of Dalyan River’s freshwater delta maze leading into the beach or witness the one-of-a-kind spectacle from the other side at Çandır, which is well worth it, however, be aware arrival is via a ferryboat from Dalyan (or a 110 km drive via Köyceğiz) and the observation area is located on a private property called The Haven. If that all seems too daunting, pay a visit to the Kaunus Rock Tombs for an up-close and personal experience of these 3,000-year-old marvels in the mountains.

Fethiye’s Ölüdeniz is easily Turkey’s very own “Blue Lagoon” and definitely the most photographed beach in the country. The color of the water coupled with the lush mountainous backdrops makes it a paradise for photo ops. There is the main beach, where the water is a breathtaking turquoise and a secluded side, which is an oasis of to the beach, where the water takes on greener hues.

Top tip: Take an aerial photo of Ölüdeniz by riding the Skywalk Cable Car to Babadağ. Or, better yet, paraglide off the mountain to land on the beach itself.

Hands down the most popular spot to photograph the Istanbul vista encapsulating two continents in a single shot was the rooftop of Kubbe Istanbul, once a quaint coffee shop that through the phenomenon of Instagram popularity transformed into a pricy photograph backdrop. This famous roof has incurred damage of late and the proprietors have now set up in Taht Istanbul for what has become a full-on photography studio with professional photographers, oriental lounge seating, a wardrobe of traditional Turkish costumes and photoshopped seagulls should you choose. While, I can’t wholeheartedly recommend the experience, especially since the “seven hills” of Istanbul and Galata Tower offer endless views of the city from above, it would be remiss to not mention this iconic spot that has become one of the world’s most well-known outdoor photo studios for social media.