Victim blaming as an Israeli tool to whitewash crimes 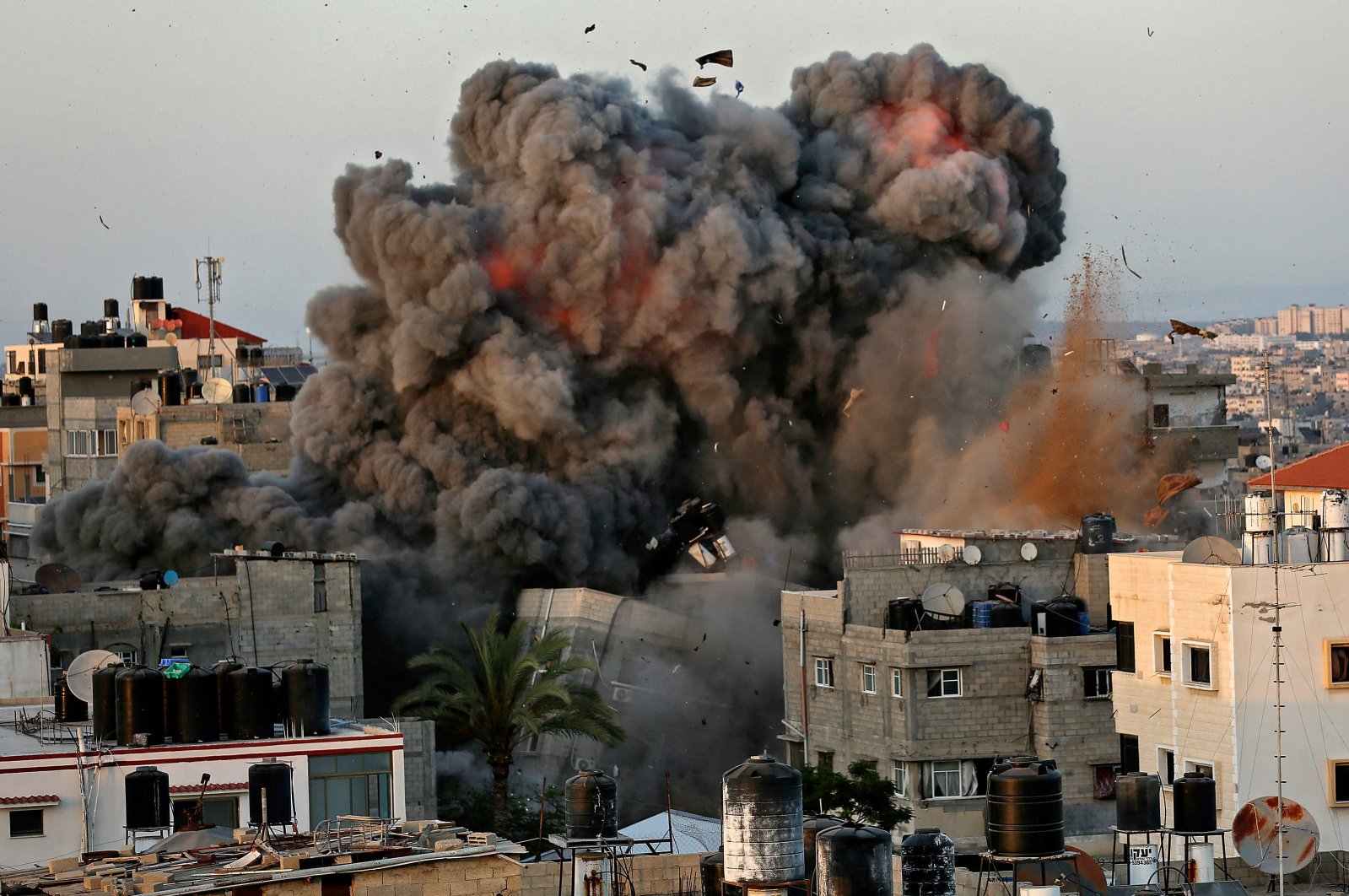 A ball of fire and thick smoke erupts following an Israeli bombardment on a building in Gaza City's Rimal residential district, Palestine, May 16, 2021. (AFP Photo)
by Merve Şebnem Oruç May 18, 2021 12:05 am
RECOMMENDED

It has been almost 11 years since I received a call from a friend about Israel’s raid on the Mavi Marmara flotilla in the Mediterranean. To recall, on May 31, 2010, three ships carrying human rights activists from Turkey and all around the world, aiming to deliver humanitarian supplies to Palestinians in the world’s largest open-air prison, Gaza Strip, and “symbolically” break the Israeli blockade, had been encircled by the Israeli Defense Forces (IDF) in international waters.

For the record, I was not a journalist then. As soon as I heard the news, I found myself in front of the Israeli Consulate in Istanbul among a flood of protesters calling on Israel to release the flotilla and allow the activists to continue on their course.

I was worried but eventually began to settle down since the whole world was watching live on TV, and I thought that nothing would happen to the passengers on board.

So, I went home and took a nap. However, in a few hours, I woke up to the shocking news that Israel's navy had hijacked the ships, killing nine human rights activists and severely wounding another, who eventually lost his life.

What was more shocking was Israel’s rage against the international criticism, which was, as a matter of fact, very soft, considering the violence against the peaceful activists.

Let alone the legality and morality questioning, many Israelis were depicting the bloody military attack against civilians as a legitimate act of self-defense.

While Israeli Prime Minister Benjamin Netanyahu reportedly said that “our soldiers were lynched” and some Israeli papers such as Yedioth Ahronoth described the incident as an “ambush for the Israeli commandos,” the mainstream media of Israel portrayed the IDF soldiers, who killed 10 and wounded many, as the victims of bullying by the activists on the ship, who had no weapons.

What Israel did was victim blaming, acting like a rapist who accuses the woman in the wake of his sexual assault.

What happened during Operation Protective Edge of the IDF in 2014, which turned into a ground operation in the Gaza Strip and immediately turned into a slaughter, was not different.

The images of shrouded bodies of little babies put into ice cream freezers since the morgues in Gaza overflowed with corpses were everywhere on the internet.

The dead bodies were on the streets and the medical facilities were left in ruins after the bombings of Israel's collective punishment campaign.

Meanwhile, Israeli media was pretty occupied with defending the onslaught as an act of self-defense once again, representing the operation as a war between equals.

However, in the aftermath, around 70 Israelis were killed, including five civilians, while at least 2,250 Palestinians lost their lives.

The doctoral thesis of Emad S. Moussa, who studied at Bournemouth University, namely “Victimhood as a Driving Force in the Intractability of the Israel-Palestinian Conflict,” reminded me of an interview on Channel 4. The interview was titled “Mothers of Israel and Palestine,” and it featured a Palestinian mother in Gaza wearing a “Press” marked bulletproof vest and helmet during the interview in front of a pitch-black Gaza scene in stark contrast to an interview with an Israeli mother in her thin summer clothes without any protective gear speaking on a vibrant street of Jerusalem.

Of course, both of them were mothers and both were worried about their children. What was appalling was that Israeli mother claimed 80% of the dead were Hamas fighters.

When asked, “Do you see children dying in Gaza ... being buried?” she answered with no shame: “Some of those pictures are horrific, there is a question of how we can, in fact, counter that in the media.” She was just thinking about suppressing those photos to convince the world Israeli Jews suffered more than Gazan people.

On the other side, while a Knesset member, Ayelet Shaked, shared on her Facebook wall that the Palestinian mothers should follow their sons to their death or more “little snakes” will be raised, Israelis were gathering on the hilltops in the border town of Sderot to watch and cheer with popcorn and drinks in their hands, posing for selfies while the military dropped bombs on Gaza in the background, killing mothers and their children.

In order to rationalize these kinds of disgraceful acts, Israeli columnists arrogantly wrote lots of op-eds claiming that there was no such thing as an innocent civilian in Gaza.

The representation of escalating tension since the beginning of the Islamic holy month of Ramadan in mid-April started with the barriers put up by Israeli police at Damascus Gate in East Jerusalem to prevent Palestinians from going inside the Old City and praying in Al-Aqsa Mosque, the third holiest shrine in Islam, is like watching the same movie once again.

What has been done by Israel was premeditated, and it was not hard to see what was coming next as Israelis were getting prepared to celebrate the establishment of Israeli control over the Old City as a result of the 1967 Six-Day War.

As Israeli police crossed the holy “red line” raiding the Al-Aqsa complex to pave the way for the so-called “Jerusalem flag day march,” a warning came from Hamas in Gaza. And then all the hell broke loose.

The attempts of Israel apologists to contain the damage on the “Jewish victims” image by a video of fanatic Zionists chanting and singing did not work this time, as the video went viral on the internet.

The reason for the joy of the Zionists was a fire started inside the Al-Aqsa complex. Fortunately, it did not cause any damage to the sacred site.

Before the fire was extinguished, Daniel Seidemann, the director of the Zionist organization "Terrestrial Jerusalem," had already said that the fire was the “apocalyptic” image of “flames rising high above” the complex, known as the Temple Mount to the Jews, while many Zionist journalists and social media users shared the far-right extremists’ dance party who thought the mosque was going to be destroyed.

What they were singing was a Kahanist revenge song with words from the biblical story of Samson: “O God, that I may be at once avenged of the Philistines from my two eyes.”

A virulent extremist, Rabbi Meir Kahane called for the ethnic cleansing of Palestinians while he served in the Knesset before he was assassinated in 1990.

Although the Kach party that was founded by Kahane was banned in 1994 after one of its members, Baruch Goldstein, killed 29 Muslims praying in Ibrahim Mosque in the West Bank city of Hebron, the former head of a Kahanist youth movement and the current head of the extremist Jewish Power party Itamar Ben-Gvir was elected to the Knesset last month.

Making a provocative visit to the Sheikh Jarrah neighborhood of East Jerusalem last week ahead of the flag-day parade, Ben-Gvir called for the destruction of Al-Aqsa Mosque, which was already included in the long-term plan of Israel, and then went to the holy site.

Zionists who usually march on the narrow streets of the Palestinian quarters of the Old City halted this time as they were busy celebrating the fire in Al-Aqsa Mosque and singing a song about genocidal revenge.

The numbers of dead Palestinians are still mounting in West Bank and Gaza Strip.

We are all aware of the fact that Israeli Prime Minister Benjamin Netanyahu, who just recently said that Gaza was just and moral, adding that Israel would not tolerate “pogroms” in its cities, needs this as he is losing his battle to the Knesset.

However, apart from the extremists and the ones with political agendas, it looks like most of the Israelis feel like there are putting up an existential fight, which obviously prevents them from seeing the difference between facts and perceptions.

It is not the geopolitical reasons for the Israelis who see themselves as victims; it is a psychological problem that blocks their rationality, empathy and detaches them from reality.

It is very well understood and respected that the Jews have a collective memory of the Holocaust, but the ones that did this to them were in Europe; they were not Palestinians.