A tense Ramadan in occupied Jerusalem 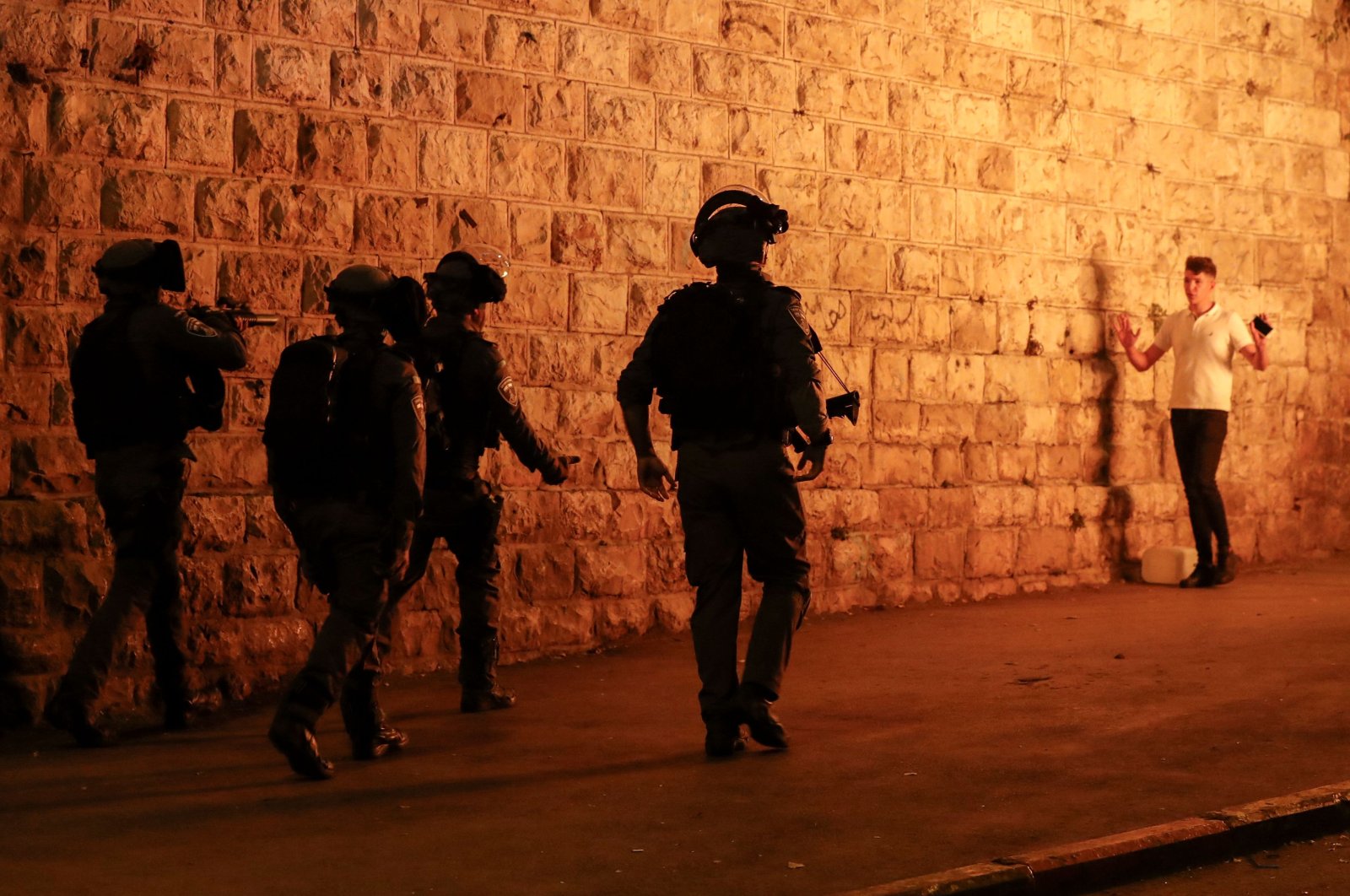 In occupied Jerusalem, Israeli-Palestinian tension has escalated higher than usual since the beginning of the Islamic holy month of Ramadan on April 13 and protests turned violent last week with scores of arrests and injuries.

Each Friday, thousands of Palestinian worshippers anxiously try to attend the weekly prayers at the Al-Aqsa Mosque Compound, making their way through Israeli strict measures, crossing many barriers as Israeli police beef up presence in and around Jerusalem.

In the early hours of the morning, the Israeli occupation authorities seal off the checkpoints separating Jerusalem from the rest of the West Bank and deploy police across the Old City, obstructing the movement of Palestinians and their vehicles, forcing them to walk for long distances to reach the Holy Site.

Inside the Old City, police officers set up iron barriers, inspect the identity cards of the passersby in the alleyways leading to the mosque compound, issue fines against others purportedly for not wearing face masks and briefly detain others for allegedly lacking entry permits.

This comes as the so-called Israeli Civil Administration, the body administering its military occupation of the West Bank, announced that in Ramadan it would allow only 10,000 people from the West Bank to access the mosque, but they would have to be fully vaccinated against COVID-19. Meanwhile, no one from the besieged Gaza Strip was granted a permit to pray at the mosque.

Since the first day of Ramadan, East Jerusalem has witnessed night-time clashes between police and worshippers, with tensions mounting over the police decision to ban people from sitting on the stairs outside the Damascus Gate (Bab al Amoud), under the guise of coronavirus restrictions, as well as the decision to disconnect power during the call to prayer at the mosque compound.

The nightly disturbances in the Al-Aqsa Mosque area increased when Israeli police blocked access to the promenade around the walls with metal barricades barring popular Palestinian gatherings in the area at the end of their daytime fasting and evening prayers at Al-Aqsa Mosque.

Usually, Tarawih, a voluntary prayer exclusive to Ramadan evenings, draw hundreds of thousands of Palestinian Muslims to the mosque compound that houses both the Dome of the Rock and Al-Aqsa Mosque, considered the third holiest site in Islam. For most Palestinians in Jerusalem and across the occupied Palestinian territories, Ramadan is directly connected to the Al-Aqsa Mosque.

With the onset of the occupation in 1967, Israeli authorities began to pursue a policy of physical, political and economic segregation of East Jerusalem from the rest of the occupied Palestinian territory (OPT), which continues apace today.

Segregation strategies gained momentum during the last decade through measures that have altered the physical and demographic realities of the city and its predominantly Palestinian and Arab landscape.

These include the city’s annexation and the expansion of Jewish settlements in and around East Jerusalem, as well as the construction of the separation barrier, which has effectively redefined the borders away from the pre-1967 armistice line.

The separation barrier, among other obstacles, hinders movement into and out of East Jerusalem, cuts it off from the remainder of the West Bank, its natural hinterland, and hinders access to its holy places, markets and health services for Palestinians, living on the other side of the barrier nominally under Palestinian Authority (PA) jurisdiction.

Of the 3 million Palestinians in the occupied West Bank, only those over a certain age are allowed access to Jerusalem on Fridays, while others must apply for a hard-to-obtain permit from Israeli authorities. The restrictions already cause serious congestion and tension at checkpoints between the West Bank and Jerusalem, where tens of thousands must pass through security checks to enter Jerusalem to pray.

Al-Aqsa in Jerusalem remains a constant point of contention in the Palestinian-Israeli conflict and the site has been the most contested piece of territory in the Holy Land since Israel occupied East Jerusalem including the Old City, in 1967, along with the West Bank and Gaza Strip.

Tensions have simmered near Al-Aqsa for the past years and in 2015, clashes broke out when hundreds of Jews tried to enter the mosque complex to commemorate a Jewish holiday.

A year later, protests also erupted after groups of Jewish settlers visited the compound during the last 10 days of Ramadan holy month in contravention of tradition.

Most clashes in the compound have occurred as a result of Israeli settlers provoking actions trying to pray within the compound, directly violating the status quo.

Besides, tensions rose in July 2017 after Israel shut down Al-Aqsa Mosque Compound for the first time since 1969, after a deadly gun battle between three Arab-Israel citizens and Israeli forces ending in the deaths of two Israeli police officers and the three Arab-Israeli citizens.

Israel subsequently closed the site for Friday prayers and reopened it the following Sunday with new measures, including metal detectors and additional cameras at the compound’s entrances. But Palestinian protesters prayed outside the gates and refused to enter the compound until Israel removed the new measures, which were seen as the latest move by Israel to impose control and Judaize the city.

Recently more than 100 Palestinians have been wounded after violence broke out outside one of the entrances to the walled Old City where far-right Israelis had completed a march, during which participants harassed Palestinians and chanted “death to Arabs” and waved banners reading: “Death to terrorists.”

The Palestinian Red Crescent said it had treated at least 105 people, with some 20 of them hospitalized.

The Palestinian president’s office condemned “the growing incitement by extremist far-right Israeli settler groups” and urged “the international community to protect the Palestinian people from the ongoing settler attacks.”

“East Jerusalem is the eternal capital of Palestine and is a red line,” the presidency said in a press statement.

Hamas, which governs Gaza, also condemned the violence, calling it "an Israeli plot against the Al-Aqsa Mosque – one of Islam’s most revered sites."

In a statement in English, Hebrew and Arabic, the U.S. Embassy said it was “deeply concerned” about the violence.

“We hope all responsible voices will promote an end to incitement, a return to calm, and respect for the safety and dignity of everyone in Jerusalem,” it said.

East Jerusalem has long been a flashpoint, with Jews and Arabs living in uneasy coexistence.

Israel considers the entirety of the occupied city of Jerusalem its capital, though this is not recognized by the vast majority of the international community. Palestinians claim East Jerusalem as the future capital of their hoped-for independent state.

Although Al-Aqsa is a small area in occupied Jerusalem, symbolically it is a large part of the conflict between Israelis and Palestinians. Conflict over the area serves as a very strong catalyst for the routine injustice and oppression that Palestinians in Jerusalem are facing, causing continuous eruptions of popular anger and uprisings.