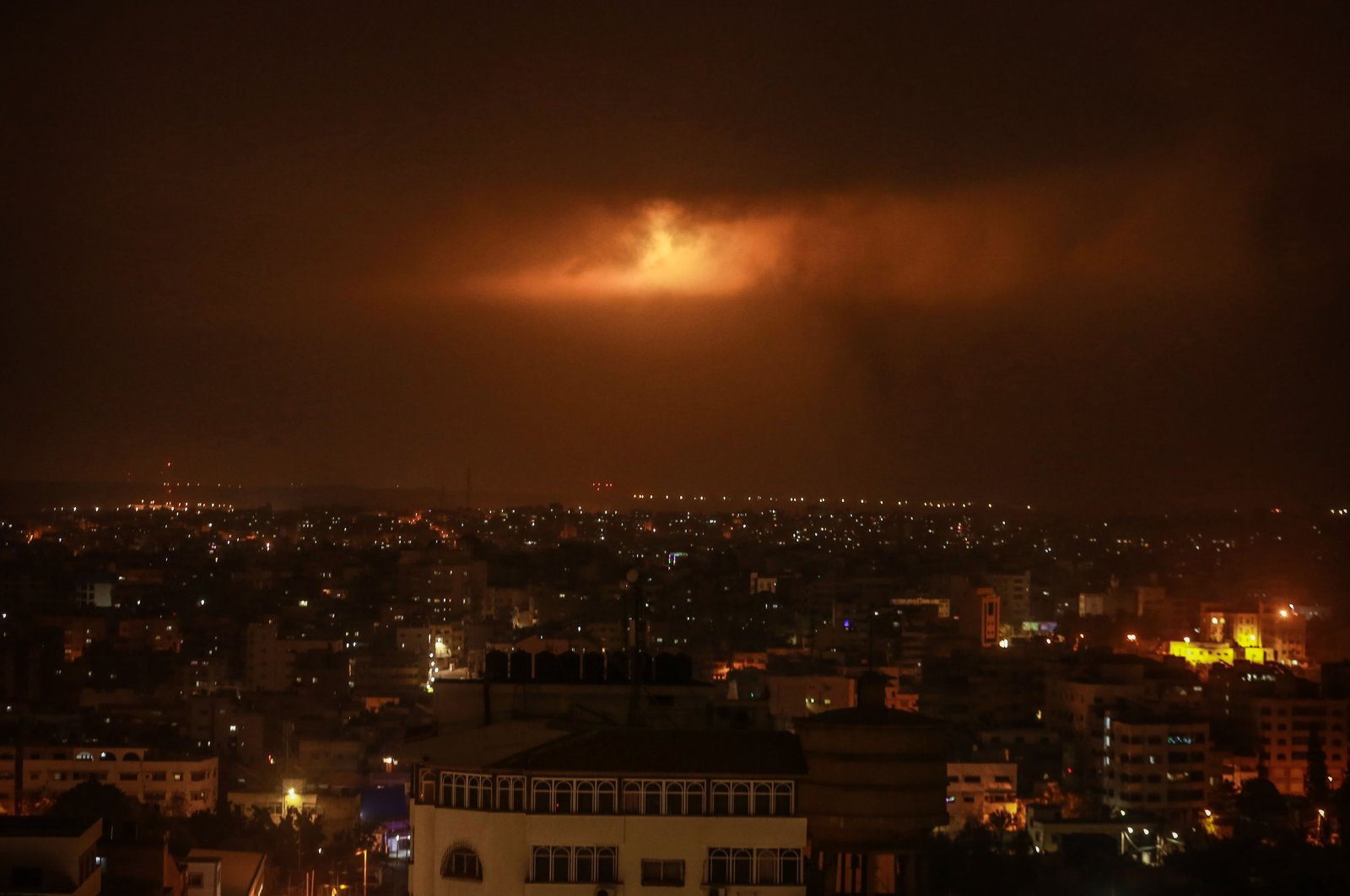 Lighting bombs fired by the Israeli army can be seen through the clouds after the Palestinian protests in Gaza City, Palestine, April 24, 2021. (Photo by Getty Images)
by Najla M. Shahwan May 05, 2021 12:05 am
RECOMMENDED

The exact status of Palestinians has been a matter of discussion for a long time as terms such as "disputed territories," "occupied territories" and even a state of “apartheid" are used to describe Israel's racial violence and discrimination against Palestinians.

In an extensive report, Human Rights Watch (HRW) recently joined a growing number of commentators and rights groups in viewing the Israeli-Palestinian conflict as much more than just a land dispute. According to HRW and many others, Israel has systematically been denying the basic rights of Palestinians, who make up around half of Israel's population.

Last month, the ICC announced it would investigate war crimes in the Israeli-occupied West Bank and Gaza Strip.

The HRW report alleges that Israel is committing an "apartheid" crime by seeking to maintain Jewish domination over Palestinians and its Arab population.

The reported violations apply to the Israeli treatment of Palestinians in the West Bank, the blockaded Gaza Strip and the annexed East Jerusalem as well as of Arab Israelis – the Palestinians who chose to stay on their land following Israel's creation in 1948.

Regarding the occupied West Bank, Israel points to the agreements signed in the 1990s that afforded Palestinians limited self-rule there. However, HRW says that the Israeli government still "retains primary control over many aspects" of their lives, including borders, natural resources and the movement of people and goods.

Then there is Gaza, where about 2 million Palestinians live under a strict blockade. Although the Israeli forces claim to have pulled out of Gaza in 2005, it still maintains control of Gaza’s borders, sea and airspace.

The HRW report draws on years of human rights documentation, analyses of Israeli laws, a review of government planning documents and statements by officials summarizing that there is a "present-day reality of a single authority, the Israeli government ... methodologically privileging Jewish Israelis while repressing Palestinians, most severely in the occupied territory."

HRW's executive director, Kenneth Roth, said this was not simply “an abusive occupation."

“These policies, which grant Jewish Israelis the same rights and privileges wherever they live and discriminate against Palestinians to varying degrees wherever they live, reflect a policy to privilege one people at the expense of another,” Roth explained. "The oppression of Palestinians there has reached a threshold and a permanence that meets the definitions of the crimes of apartheid and persecution."

Apartheid is defined under the 1938 Rome Statute that established the ICC as an “institutionalized regime of systematic oppression and domination by one racial group over any other” with the intent of “maintaining that regime” while persecution, which is also a crime against humanity, is defined as “the intentional and severe deprivation of fundamental rights” of a group of people.

Omar Shakir, HRW’s Israel and Palestine director, said that from the early days of the peace process in the 1990s up until former U.S. President Barack Obama's years, “there was enough there to question whether there was an intent for permanent domination."

“The authorities have adopted policies to mitigate what they have openly described as a demographic ‘threat’ from Palestinians,” he said, referencing concerns expressed by Israeli politicians that a majority Palestinian population would endanger the Jewish state.

“In Jerusalem, for example, the government’s plan for the municipality ... sets the goal of ‘maintaining a solid Jewish majority in the city’ and even specifies the demographic ratios it hopes to maintain.”

"This is the starkest finding the HRW has reached on the Israeli conduct in the 30 years we’ve been documenting abuses on the ground there,” Shakir noted.

Israel has occupied the West Bank and annexed East Jerusalem in 1967. Since then, Jewish settlers in both areas have absorbed increased amounts of land and constructed thousands of homes while Palestinians in East Jerusalem and across much of the West Bank are regularly denied building permits and their homes are demolished.

Israel's settlement policy in occupied Palestine is illegal under international law, particularly international humanitarian law, including the Fourth Geneva Convention, which relates to the protection of civilians in times of war.

According to many rights groups, nations should declare sanctions on Israel and increase pressure on the country to stop committing crimes.

Responding to the claims, Israel’s foreign ministry accused HRW of a “longstanding anti-Israeli agenda” and said the report was a “propaganda pamphlet” that had “no connection to facts or reality on the ground.”

"The fictional claims that HRW concocted are both preposterous and false,” it said.

HRW cited public statements by Israeli leaders and officials, arguing that Israel has “demonstrated an intent to maintain the domination of Jewish Israelis over Palestinians” in Israel, the West Bank and Gaza, coupled with “systematic oppression” and “inhumane acts.”

B’Tselem, a leading Israeli human-rights organization, has been documenting the violations of human rights in the occupied Palestinian territories since 1989. Last January, it issued an opposition paper announcing that it has decided to draw a line.

In its paper entitled “A Regime of Jewish Supremacy from the Jordan River to the Mediterranean Sea: This Is Apartheid,” the group argues that the Israeli regime of apartheid rests on four pillars: citizenship, land, freedom of movement, and political participation.

Virtually any person of Jewish ancestry anywhere in the world can claim Israeli citizenship; however, immigration to Israel is impossible for Palestinians, and only a minority of Palestinians – about 1.6 million, out of 7 million – who live on land controlled by Israel are citizens of Israel, and their rights are limited compared to their nearly 7 million Jewish counterparts.

Israel has pursued a policy of “Judaizing” the territory it controls, the B'Tselem's paper says, and adds it is “based on the mindset that land is a resource meant almost exclusively to benefit the Jewish public.”

The government uses a mix of bold and obscure legal procedures to expropriate Palestinians’ land, demolish homes and forbid construction by Palestinians while encouraging building and other land use by Jews.

Finally, the 5 million disenfranchised Palestinians cannot vote in Israeli elections. Most of them can potentially vote in the Palestinian Authority (PA) elections, but the PA's influence over their lives is relatively minor as they are governed by Israelis.

Palestinians in the occupied territories are also forbidden to protest without a permit.

B’Tselem focused on what it called “grand apartheid,” or the broad policies and laws that make the daily lives of Jews and Palestinians entirely different.

On its part recently, B’Tselem welcomed HRW's groundbreaking legal analysis, saying that “the alarming findings by HRW are essential reading for anyone who desires to truly come to terms with Israel’s domination over Palestinians and its systematic oppression of them.”

“The HRW report must now serve as an urgent wake-up call for the international community, to finally take concrete action in rejection of apartheid and in support of human rights, democracy and justice."

The situation of the Palestinians living in Israel and the occupied Palestinian territories continues to worsen with no end in sight.

Israel defines itself as a single and exclusive ethnoreligious group, calling itself a "Jewish State" which aims to promote a set of ideals, values, culture and heritage for the benefit of its Jewish population.

In Israel, the early Zionist idea of "a land without a people for a people without a land" dominates the political culture and the idea of transfer, especially on the political right, continues to push the Jewish expropriation of Palestinian-owned land within Israel.

Moreover, Israel has created special privileges for the Jewish population over everyone else with its "Right of Return and Citizenship" laws that guarantee any Jew in the world the right to settle in Israel and be granted citizenship status upon entering the country.

Israel's laws, policies and practices in its own territory and the West Bank, Gaza and East Jerusalem fulfill the criteria of an apartheid regime and should be seen as one front among many in the anti-racist and anti-colonial struggle for Palestinian freedom.