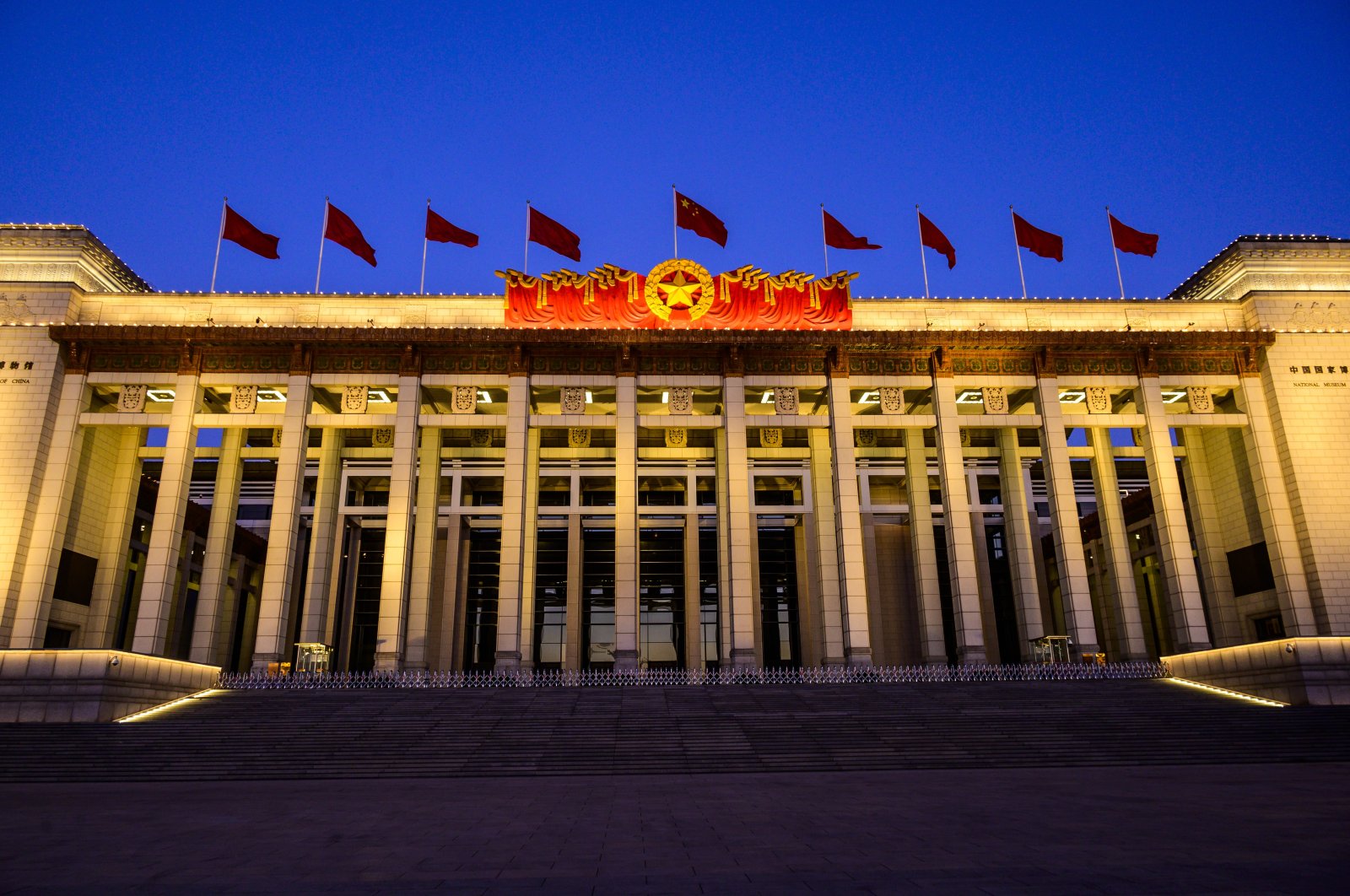 A general view of the National Museum of China at Tiananmen Square on the last day of the Spring Festival holiday, Beijing, China. (Photo by Getty Images)
by Abdurrahim Sağır Jun 09, 2021 12:05 am

After steering clear of Middle Eastern affairs for decades, Beijing is now in the process of gradually integrating itself into the governance of the region

China’s economic and diplomatic activities across the Middle East have been increasing significantly in the last decade. Still, China’s economic engagement with the region receives most of the attention, which is logical.

Currently, China is the largest trade partner of 11 Middle Eastern states, as well as the largest customer of the region’s natural resources.

In 2016, China became the largest investor in the region with investments worth $28.5 billion. The Belt and Road Initiative (BRI), on the other hand, has become a magnet for regional governments that are looking forward to diversifying their economic structure.

All of these economic developments are highly significant for regional economic governance, but the changing nature of Chinese diplomacy toward the region is just as significant and should not be overshadowed by the economic dimension.

Chinese diplomacy remained passive and reactionary to regional developments in the Middle East for decades and resulted in some labeling it as a “free rider.”

But the new foreign policy framework strategy entitled “Major Country Diplomacy” adopted at the 18th Party Congress in 2012 suggested a gradual but clear break from a strategy of "keeping a low profile."

From this turning point onward, Chinese foreign policy has been in a transition period with implications reaching from Latin America to Southeast Asia.

Along with the official line, we observe that Chinese strategic thinking on the Middle East has also evolved. Once being described as “highly complicated and chaotic,” “murky waters” or a “swamp” by Chinese scholars, the region was recently referred to in Chinese literature as “an important stage for China to carry out 'Major Country Diplomacy,” “a key region in terms of reflecting global power shifts” and “a strategic fulcrum that China must rely on” as well as other similar phrases.

Today an increasing number of Chinese and non-Chinese scholars point to the Middle East's peripheral position to Chinese national interests beginning to change to incorporate geopolitical and strategic interests.

Along with other diplomatic initiatives such as establishing strategic partnerships across the region and strengthening regional multilateralism efforts, Beijing has also been keen on serving as a mediator in the region as a “responsible major power,” which is also an implication of the Major Country Diplomacy framework.

In this direction, former Chinese ambassador to Turkey, Yao Kuangyi, pointed out in 2014 that China is changing its “passive and reactive diplomatic posture” and showing initial – albeit small – signs of deepening its political and security involvement in the Middle East.

This increasing involvement in large part stems from Beijing’s desire to play a greater role in global governance.

The ongoing conflicts in the Middle East and North Africa (MENA) region, as professor Sun Degang wrote, “have provided Beijing with a significant opportunity to enhance its status as a world power through conflict resolution.”

In this context, in recent years we have been witnessing the gradual integration of China to the security governance of the Middle East.

China has been appointing successive special peace envoys to the region since 2002. In addition, high-level visits, hosting diplomacy activities and promoting peace talks between the conflicting parties have emerged as a means of China’s mediation activities.

Beijing, which kept a distance from regional conflicts for decades, has also initiated several diplomatic proposals for the settlement of the Palestine issue, the Syrian civil war and the Yemen crisis.

And lastly, during his Middle East tour in the midst of the coronavirus pandemic in March 2021, China's Foreign Minister Wang Yi announced a five-point proposal for peace and stability in the Middle East.

Since the revolutionary times of Mao Zedong, the founder of the People's Republic of China, China has been a supporter of the Palestinian people’s struggle. Beijing’s support for the Palestinian resistance varied from financial support to material support, including arms supplies.

Noticeably, as a demonstration of its solidarity, Beijing refused to recognize the state of Israel until 1992. However, since the establishment of bilateral ties, China’s relations with Israel developed very rapidly on the foundation of arms sales and military technology transfer.

Through Israel, Beijing has been able to purchase strategic military technology that Washington refused to sell to a communist regime.

This cooperation culminated in the establishment of an “innovative comprehensive partnership” in 2017. In parallel with these developments, China’s policy shifted to a more pragmatic stance on the Israel-Palestine issue.

Although Beijing still criticizes Israel’s continuous occupation of Palestine and advocates for the two-state solution, China's material and political support for Palestine has been gradually reduced.

During the last decade, we have witnessed Beijing’s intention and growing desire to play a mediator role in the conflict. In May 2013, during Palestinian President Mahmoud Abbas’s visit, China's President Xi Jinping introduced a four-point proposal for the settlement of the Palestinian question.

In the following year, Wang announced a five-point proposal on a cease-fire in Gaza. And most recently at the United Nations Security Council (UNSC) meeting regarding the recent Israeli attacks on Gaza, Wang made a call to both sides for peace talks in China.

Considering Beijing’s longstanding commitment to nonintervention in regional conflicts, these diplomatic initiatives are important for grasping the transition of Chinese strategic thinking toward the Middle East.

That being said, it is difficult to point out any practical outcomes of these initiatives. As Yonan Evrom, an Israeli scholar focusing on China-Middle East relations, underlines “China has taken no practical steps against Israel beyond supporting U.N. resolutions in favor of the Palestinian side.”

This outcome could be attributed to several shortcomings of Chinese initiatives such as lack of operative steps, a clear schedule and coercive measures (such as imposing sanctions).

Interestingly, the inefficiency of Chinese initiatives seems to be creating a favorable environment for China.

While Beijing enjoys a certain popularity among Arab countries for being a "firm supporter of the Palestine struggle" by keeping limited support at the rhetorical level and in U.N. resolutions, Beijing has been able to maintain its technology-based cooperation with a partner that has provided itself with strategic military weapons.

Wang’s speech at the UNSC meeting on the recent Israeli aggression is an indication of Beijing’s desire to be a part of "the solution."

After emphasizing China’s intensified efforts for promoting peace talks, he stated that “we reiterate the invitation to peacemakers from Palestine and Israel to hold a dialogue in China, and welcome negotiators from the two countries to hold direct talks in China.”

But like prior Chinese diplomatic initiatives, this proposal was not followed by concrete action at the time of writing this article.

If we need to make a projection about the future, this trend is not likely to change for a considerable time.

Considering China’s increasing appetite for Israeli high-tech and innovations on the one hand and the recent rapprochement between Gulf countries and Israel on the other, there are no sufficient incentives for Beijing to risk its relations with Israel, while its rhetorical – and limited political – support for Palestine provides sufficient space for Chinese diplomacy.