Palestinian cause: Back in two-state solution or what? 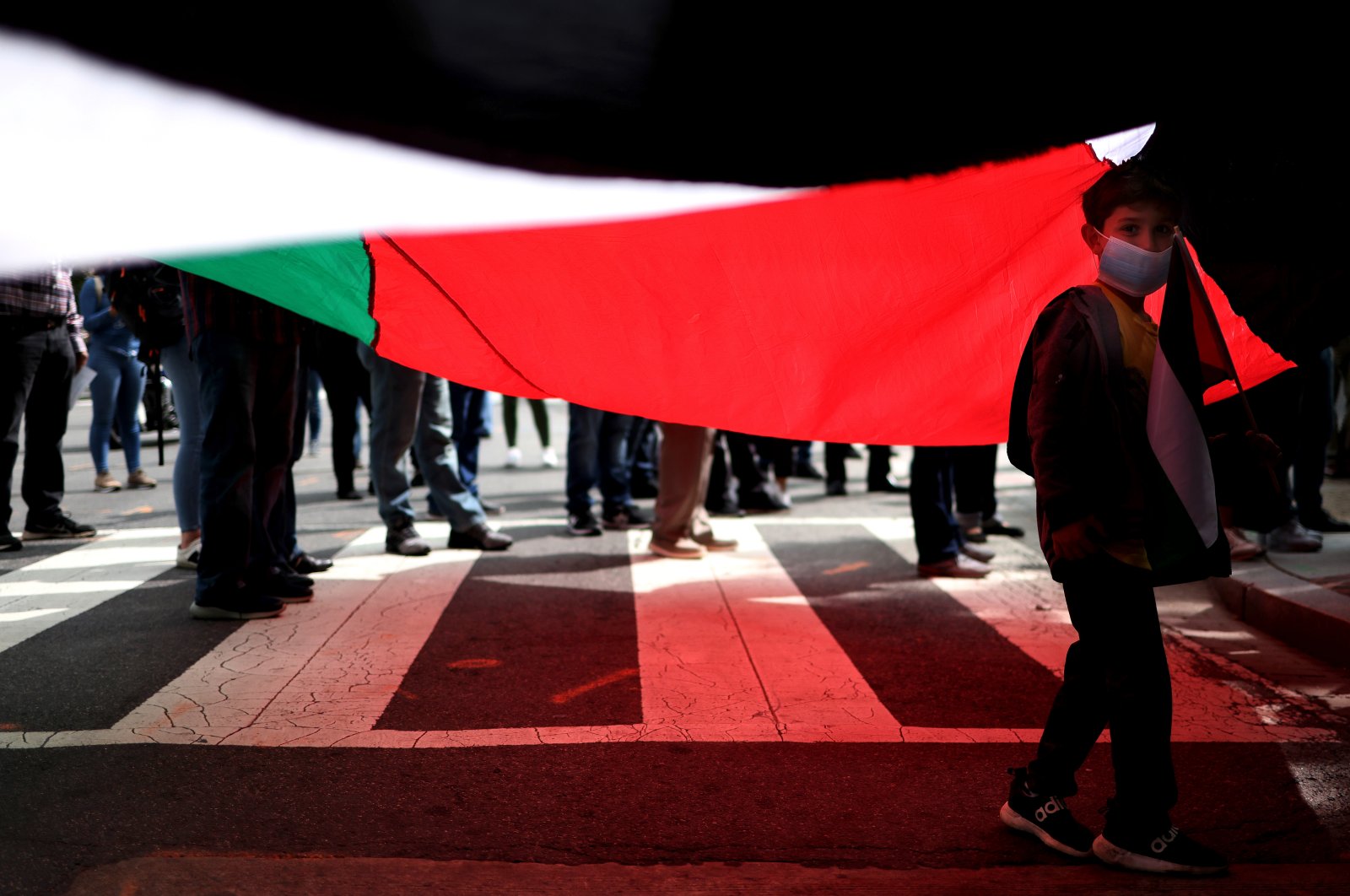 The United Nations, the United States, Russia and the European Union recently met virtually to discuss relaunching their long-stalled effort to get Israel and the Palestinians to negotiate a two-state solution to their decades-old conflict.

A brief statement from the four mediators, known as the Quartet, said envoys discussed returning "to meaningful negotiations that will lead to a two-state solution, including tangible steps to advance freedom, security and prosperity for Palestinians and Israelis, which is important in its own right."

Since 2014 there have been no significant peace talks between Israel and the Palestinians, and the two sides are fiercely divided over the core issues of the conflict.

Last January, U.N. Secretary-General Antonio Guterres said there were “reasons to hope” for progress toward ending the Israeli-Palestinian conflict after years of inaction, adding that the U.N. would explore all initiatives to facilitate “a true peace process” based on the two-state solution.

“We were completely locked down in a situation in which there was no progress visible.”

Guterres made it clear that U.S. President Joe Biden’s more even-handed approach opened the possibility of Quartet meetings previously blocked by the U.S., as well as broader peace efforts.

The Quartet was established in 2002 and has been criticized for its failure to get either Israel or the Palestinian Authority (PA) to change their policies and negotiate an end to their conflict.

The statement by the Quartet envoys did not mention any future steps but said that the envoys discussed “the situation on the ground, in particular the COVID-19 pandemic, the unsustainable disparity in economic development between Israelis and Palestinians and the need for the parties to refrain from unilateral actions that make a two-state solution more difficult to achieve.”

It was reported recently that the Biden administration is mapping out a plan to reset U.S. ties with the Palestinians, citing an internal draft memo from the U.S. State Department.

According to the United Arab Emirates (UAE) based newspaper The National, the draft memo titled “The U.S. Palestinian Reset and the Path Forward” said $15 million in the COVID-19 pandemic aid to the Palestinians could be announced by the end of this month. It also reportedly takes a tougher stance on Israeli settlement activities and mentions efforts “to obtain a Palestinian commitment to end payments to individuals imprisoned for acts of terrorism.”

The National said it was still in an early "working stage" but could eventually form the basis for rolling back parts of former U.S. President Donald Trump's approach that Palestinians denounced as heavily biased in favor of Israel.

In the meantime, the Biden administration has reinstated humanitarian aid to the Palestinians, which was cut by Trump.

Since Biden took office on Jan. 20, his aides have said they intend to repair relations with the Palestinians. The administration has pledged to resume hundreds of millions of dollars in economic and humanitarian assistance and work toward reopening the Palestinians’ diplomatic mission in Washington.

The Biden administration’s stated goal is to achieve a negotiated two-state solution based on the pre-1967 lines, with mutually agreed-upon land swaps, reinstating U.S. policy on the Israeli-Palestinian conflict to more traditionally held positions than those of Trump.

Drafted by U.S. Deputy Assistant Secretary for Israeli and Palestinian Affairs Hady Amr, the memo details the plan to roll back various Trump policies that Washington believes made reaching a two-state solution more difficult, such as U.S. legitimization of the settlement enterprise.

Amr recommends in the memo that the White House backs a two-state framework “based on the 1967 lines with mutually agreed land swaps and agreements on security and refugees.”

Biden's plan signals a restoration of U.S. credibility as a diplomatic mediator between Israelis and Palestinians after the Trump administration's heavily biased policy toward Israel.

The Trump administration provided unprecedented support to Israel, recognizing Jerusalem as Israel's capital, moving the U.S. Embassy from Tel Aviv, closing the Palestinian Liberation Organization's (PLO) diplomatic mission in Washington, closing the U.S. Consulate in East Jerusalem – which served as the de facto embassy to the Palestinians in East Jerusalem, the West Bank and Gaza – slashing financial assistance for the Palestinians by cutting off $200 million in economic assistance and halting around $350 million annual funding for the United Nations Relief and Works Agency (UNRWA) that assists Palestinian refugees and reversing course on the illegitimacy of Israeli settlements on land claimed by the Palestinians.

The peace plan unveiled by Trump in February 2020 envisioned a disjointed Palestinian state that turned over key parts of the West Bank to Israel while siding with Israel on key contentious issues including borders, the status of Jerusalem and Jewish settlements. It was vehemently rejected by the Palestinians.

The frequency of policy shifts with Israel clicked up in the final months of the Trump presidency as his administration pushed the Abraham Accords in the region, producing peace deals between Israel and the UAE, Bahrain, Sudan and Morocco that failed to include a discussion of relations with Palestinians. Other subsequent changes moved the U.S. further and further away from past precedent as the days to the inauguration were counting down.

The Biden administration's latest announcement is part of a broader return to previous U.S. foreign policy practices under Biden and an end to the open hostility between Washington and the Palestinians fomented by the Trump administration.

The memo discusses “rolling back certain steps by the prior administration that bring into question our commitment or pose real barriers to a two-state solution, such as country of origin labeling.”

The memo was referring to a last-minute policy change announced by Trump’s Secretary of State Mike Pompeo, which requires all U.S. exports from the settlements to be labeled as having been “made in Israel.”

Since 1995, U.S. policy had required products made in the West Bank and Gaza to be labeled as such. That directive was republished in 2016 by the Obama administration, which warned that labeling goods as “made in Israel” could lead to fines.

Prior to the Oslo Accords, however, all products manufactured in these areas were required to mention Israel in their label when exporting to the United States.

The Pompeo order went into effect in December, but manufacturers were given a 90-day grace period, until March 23, to implement the change.

“As we reset U.S. relations with the Palestinians, the Palestinian body politic is at an inflection point as it moves towards its first elections in 15 years,” the new memo reads.

“At the same time, we (the U.S.) suffer from a lack of connective tissue following the 2018 closure of the PLO office in Washington and refusal of Palestinian Authority leadership to directly engage with our embassy to Israel.”

Noting major economic disparities between Israelis and Palestinians, the memo states that the Biden administration is “planning a full range of economic, security and humanitarian assistance programs (for Palestinians), including through UNRWA.”

The memo, which was passed along to U.S. Secretary of State Antony Blinken, highlights the United Nations Relief and Works Agency (UNRWA) in particular as one of the organizations the Biden administration plans to back in order to aid the Palestinians.

“State and the USAID (United States Agency for International Development) are working towards a restart of U.S. assistance to the Palestinians in late March or early April,” the memo says, adding that the coronavirus-related humanitarian relief package will be announced beforehand.

As previously pledged by Biden officials, the memo floats the idea of reopening an independent consulate akin to the one that served as the de facto mission to the Palestinians and operated out of the western part of Jerusalem until 2019. Doing so would signal U.S. re-commitment to a two-state solution, the document says.

Amr recommends the Biden administration push the PA to clamp down on incitement while also calling out Israeli settlement expansion on land that Palestinians hope will be part of their future state.

On his part, U.S. acting ambassador to the U.N. Richard Mills, earlier speaking at the monthly U.N. Security Council meeting on the Middle East, had stressed the importance of “renewing U.S. relations with the Palestinian leadership” and reinstating American aid as part of confidence-building measures to encourage negotiations toward a two-state solution.

He had also welcomed the idea of working toward this end with a broad array of actors, including the Quartet.

In his remarks, Mills said that the Biden administration "welcomes the recent normalization agreements" between Israel and Arab states, but he added that “Arab-Israeli normalization is not a substitute for Israeli-Palestinian peace.”

The policy shift was quickly cheered by Palestinian leaders and supporters of a negotiated solution between Israel and the Palestinians and who see the tone of the Biden administration as a welcome respite from the cold shoulder offered by Trump.

“For the first time, President Biden’s administration has officially expressed its position toward the peace process and the two-state solution,” Ahmed Majdalani, a member of the PLO’s executive committee and minister of social development at the PA, said in response to the announcement.

“We believe that this position constitutes an important positive step on the road to restoring the U.S.-Palestinian bilateral relations and opens the door wide to restore the peace process within the framework of multilateral international sponsorship.”

For more than three decades, the Palestinians have sought an independent state in the West Bank, Gaza and East Jerusalem, territories seized by Israel in the 1967 war and for much of the 21st century, the Israeli-Palestinian conflict has become inactive and diplomatic initiatives have fallen short.

Now, more than 72 years after the conflict began, progress toward a two-state solution has, by most standards, become even more challenging as realities on the ground are complex, political trends on all sides have weakened peace camps, talks have stalled and historic paradigms on negotiations and final-status issues are in question.

However, Biden and his team are clearly devoted to the two-state solution and determined to address the conflict and its core issues, as they believe that this solution will remain the only way to bring sustainable peace not only to the Israelis and Palestinians but to the whole region.