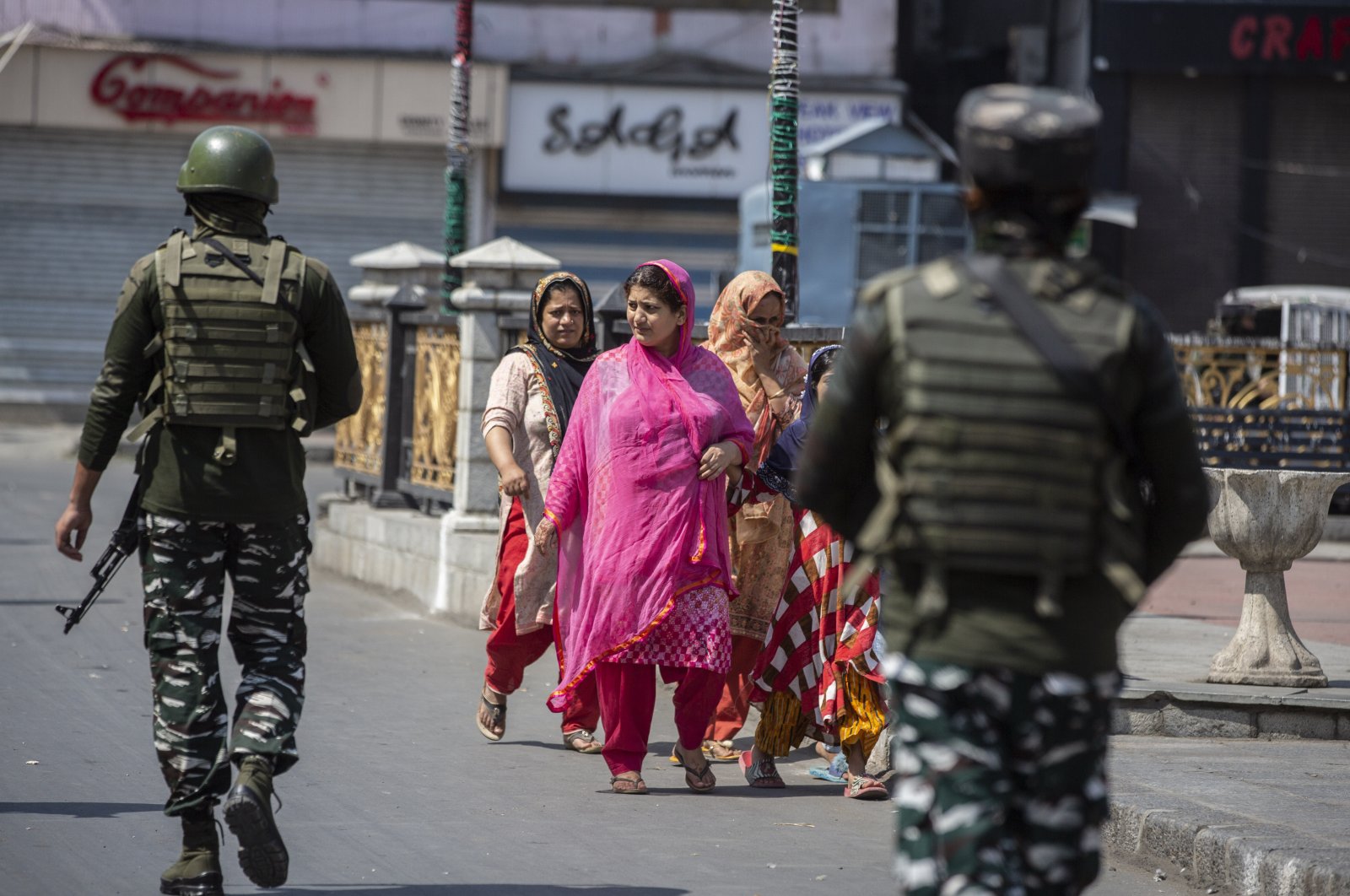 The most talked-about issues also generate the most misconceptions. Unfortunately, most of what people think they know about Kashmir are just baseless claims

“Such is Kashmir: the country, which may be conquered by the forces of spiritual love but not by the armed forces” – Rajatarangini (The River of Kings), 12th century.

According to expert consensus, Kashmir is the most dangerous place on the planet today because it could trigger nuclear volleys between India and Pakistan. It has sparked two wars between the two South Asian rivals in the past. Thus, this is no time for complacency or aloofness for the world powers.

They should seek mediation of the disputed territory (so listed by the United Nations), appoint a special envoy on Kashmir, insist that the genuine political voice of the Kashmiri people be heard and be a full partner in all negotiations over Kashmir's political destiny.

In the interim, world powers should strongly urge the government of India rescind its domicile law, which was enacted in 2020 simply to change the demography of Jammu and Kashmir; release all political prisoners; punish human rights violators; end its suppression of peaceful political dissent; open Kashmir to the international print and broadcast media; and issue travel documents to Kashmiri leaders to facilitate consultation and consensus among the Kashmiri diaspora regarding negotiating planks in talks with the governments of India, Pakistan and other interested parties.

Meanwhile, I would like to highlight a few fundamental misconceptions that have impaired world powers from executing enlightened foreign policies towards Kashmir for many decades. Among the most prominent and pernicious are:

The maharaja of Kashmir allegedly signed the Instrument of Accession to India while at the same time pleading for its military intervention to prop up his toppling repressive regime on Oct. 27, 1947. A full-scale internal and indigenous revolt was on the verge of success at that time. On that date, sovereignty had devolved on the people of Kashmir, and thus the maharaja was legally powerless to accede Kashmir to any country and thereby extinguish its independence.

Moreover, as British scholar Alistair Lamb has convincingly demonstrated in “Kashmir: A Disputed Legacy, 1846-1990,” the Instrument of Accession is probably as bogus as the ugly protocols of the elders of Zion confected by the Russian Tzar's Okhrana secret police. An original of the document has never been produced by India or anyone else. This understanding of the illegitimacy of what the maharaja and India had done was inherent in the accession parchment itself. Then governor-general of India, Lord Mountbatten, accepted Kashmir's accession to his nation contingent upon approval by the people of Kashmir in a free and fair referendum.

2. The Kashmir issue has to do with fundamentalism. Wrong.

The term fundamentalism is inapplicable to Kashmiri society. Kashmir has remained the symbol of communal harmony for centuries. It has a long tradition of moderation and non-violence. The traditional hallmark of Kashmir has been religious pluralism, amity and an aversion to the doctrinaire. Its culture cannot and does not generate extremism or fundamentalism.

Its four major religious groups – Islam, Hinduism, Sikhism and Buddhism – coexist in neighborhoods together; they work together; they socialize together; they celebrate and mourn together; they are a model of religious harmony and ecumenism. Their adherents have not been segregated into residential ghettos. A person no less important than Mahatma Gandhi eloquently elucidated these sentiments in 1947, “While the rest of the country burns in communal fire, I see a shining ‘Ray of Hope’ in Kashmir only.”

3. Kashmir is an issue of terrorism. Wrong.

On many occasions, virtually all the citizenry of Srinagar (the capital city of Kashmir) – men, women and children – came out on the streets in non-violent protest against the continuance of Indian occupation.

According to Srinagar-based newspapers, on many occasions in early 1990 more than a million Kashmiris demonstrated against India with 400 memoranda sent to the United Nations to apprise it of the tragic and intolerable situation in the valley.

In “Kashmir The Case for Freedom," a book compiled by luminaries like Pankaj Mishra, Arundhati Roy, Tariq Ali and Hilal Bhatt, Angana P. Chatterji wrote on page eight, “March 1, 1990, more than half a million people march to the offices of the U.N. Military Observer Group in Srinagar to demand the implementation of U.N. resolutions.”

Arundhati Roy wrote in her article, “Azadi: The Only Thing Kashmiris Want” in 2011, “On Aug. 16, 2008, more than 300,000 people marched to Pampore, to the village of Hurriyat leader Sheikh Abdul Aziz, who was shot down in cold blood five days earlier." Ms. Roy added: “On Aug. 18, 2008, an equal number gathered in Srinagar on the vast grounds of the Tourist Reception Centre, not the Truth and Reconciliation Committee (TRC), close to the United Nations Military Observers Group in India and Pakistan (UNMOGIP), to submit a memorandum.”

Reuters news agency reported on Aug. 18, 2008, “Tens of thousands of Muslims marched peacefully past the United Nations office in Kashmir on Monday, calling on the international body to intervene over the disputed Himalayan region.” Certainly, terrorists cannot make up the entire populations of the major towns of Indian-occupied Kashmir. Unquestionably, half a million people cannot be called terrorists. And more importantly, terrorists do not believe in submitting memoranda to the office of the United Nations as the people of Kashmir do.

4. Pakistan is in violation of the United Nations resolutions since it did not withdraw its troops from Kashmir as required under these resolutions. Wrong.

Professor Joseph Korbel, the first chairperson of the U.N. commission for India and Pakistan, has responded to this question in his article, “Nehru, The U.N. and Kashmir” published in The New Leader on March 4, 1957. He writes, “According to the Indian delegate, Pakistan prevented implementation of the section of the U.N. Commission resolution dealing with a plebiscite by refusing to carry out other part recommending demilitarization of Kashmir. This is not true: Pakistan was not expected to withdraw her forces from Kashmir as long as there was no agreed-upon plan for simultaneous Indian withdrawal.”

Kashmir is not a part of India

5. Kashmir is an integral part of India. Wrong.

"A lady asked me other day, ‘Why Gorbachov would not agree to the Lithuanian demand for independence from the Soviet Union?’ I countered with the question: ‘Do you believe that Kashmir belongs to India?’ ‘Yes, of course’ she said. ‘That is why?’ I said, ‘There are too many Russians who wrongly believe that Lithuania belongs to the Soviet Union, just as you believe that Kashmir belongs to India,’" – Minoo Masani, Former Indian Ambassador to Brazil, Dalit Voice, Bangalore, Aug. 1, 1990.

6. Third-party mediation is an interference in the internal affairs of India. Wrong.

It is commonly accepted that such objections are sophistry and that all members of the United Nations, by subscribing to the principles of the Universal Declaration of Human Rights, become co-responsible for the rights of citizens of all other subscribing states. This is all the more applicable in the case of Kashmir, which is internationally recognized as a “disputed territory” and not as a part of India, and whose future is to be determined by an impartially supervised plebiscite.

7. Abrogation of Article 370 & 35 A pave the way for the development of Kashmir. Wrong.

Kashmir Chamber of Commerce and Industry (KCCI) reported in August 2020 that Kashmir had suffered economic losses worth $5.3 billion. Over 100,000 people have lost jobs since Aug. 5, 2019.

Khalid Shah wrote in The Print on Aug. 8, 2020, “Development (in Kashmir) is only visible in Twitter hashtags and shoddy propaganda films. There is no flood of fresh investments.”

New Delhi-based Observer Research Foundation reported on Jan. 28, 2020, “The horticulture sector is in distress, tourism is in shambles, and students are suffering because of the ongoing internet blockade. It is for the first time in the past 70 years that rural Kashmir is facing such a great degree of economic slowdown. The apples industry in Kashmir, worth INR 80 billion ($1 billion), which contributes 8% of J&K’s GDP, has been worst affected.”

Dr. Syed Nazir Gilani has written extensively on the subject. He says that as a constitutional democracy, the government of India does not hold any of the powers that it exercised on Aug. 5, 2019, noting that it has continuously misled the international community that the steps being taken were necessary for economic development. The Indian government does not need to resort to these extreme, illegal and unlawful actions to pursue economic development in the state, Dr. Gilani added.

The Constituent Assembly of Jammu and Kashmir convened without an election in the state. Seventy-three out of 75 members of this assembly were declared to have been elected unopposed.

Secondly, an Indian delegate to the United Nations made a statement at the Security Council that the Constituent Assembly would not "come in the way" when the U.N. will hold a plebiscite under its auspices in the state.

Thirdly, in 1956, when the Constituent Assembly declared that Kashmir was the part of India, the Security Council adopted Resolution 122 on March 24, 1957, clearly reaffirming, “the affirmation in its Resolution 91 (1951) and declares that the convening of a Constituent Assembly as recommended by the General Council of the 'All Jammu and Kashmir National Conference' and any action that Assembly may have taken or might attempt to take to determine the future shape and affiliation of the entire State or any part thereof, or action by the parties concerned in support of any such action by the Assembly, would not constitute a disposition of the State in accordance with the above principle.”

9. Resolution of Kashmir will lead to disintegration of India. Wrong.

A fascinating answer was given to this question by Jayaprakash Narayan, known in India as the “People’s Leader and Second Gandhi." “Few things have been said in the course of this controversy more silly than this one. (Will not change in Kashmir’s status lead to disintegration of India?) The assumption behind the argument is that the states of India are held together by force and not by a sentiment of a common nationality. It is an assumption that makes a mockery of the Indian nation and a tyrant of the Indian state.”

Lastly, I wish the world powers would take a leaf out of the writings of Justice V. M. Tarkunde – referred to as “the Father of the civil liberties movement in India.” Writing in Radical Humanist, New Delhi, in March 1990, he said: “The cause of the Kashmir debacle is the initial denial of the right of self-determination and the subsequent anti-democratic policies pursued by the Indian government ... An early solution of the Kashmir problem will be of great benefit to the people of both India and Pakistan. A grant of plebiscite to the people of the Kashmir Valley is the obvious solution.”