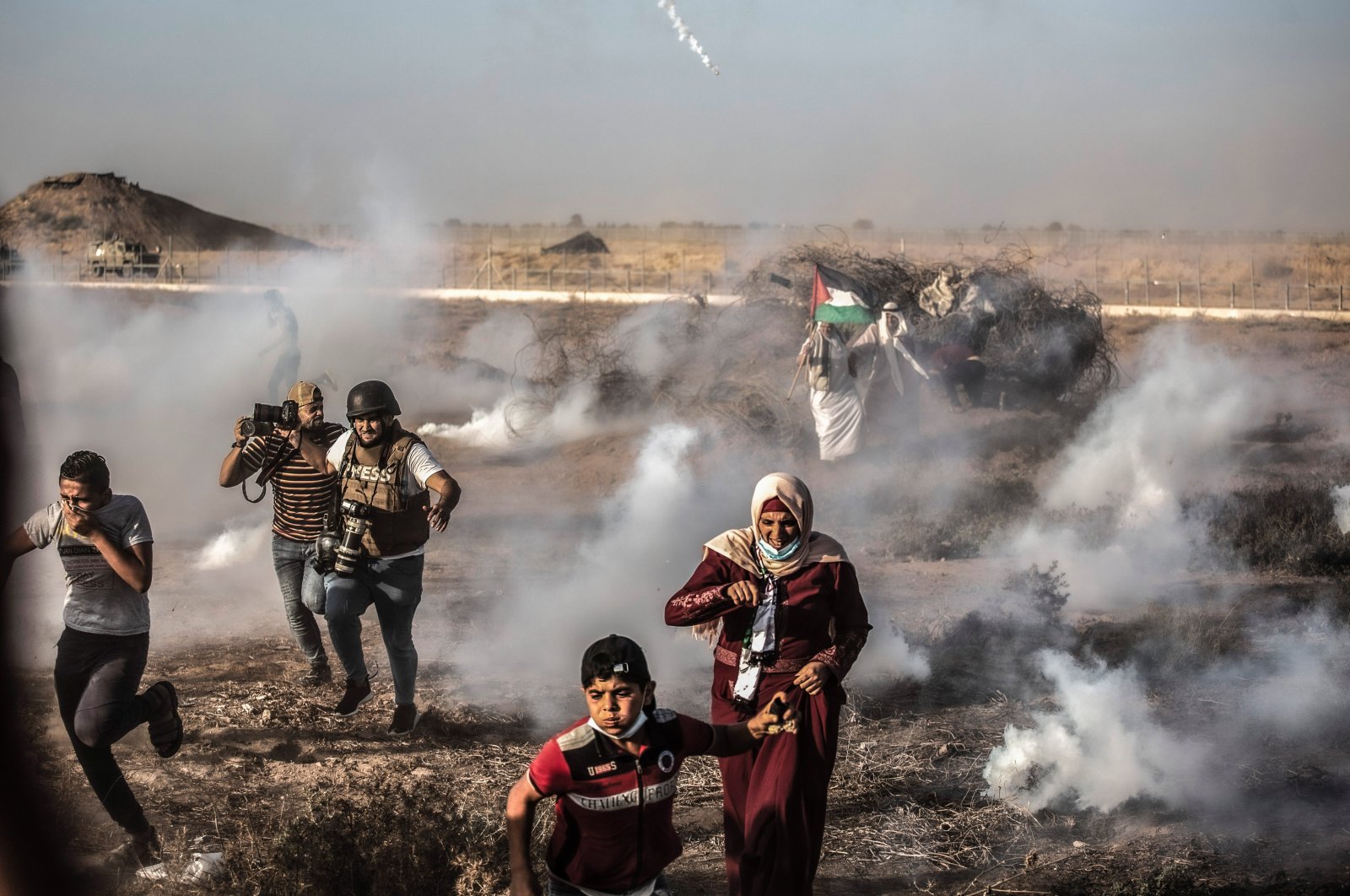 Palestinian demonstrators flee tear gas fired by Israeli forces during the demonstration near the border between Israel and the Gaza Strip, Palestine, Aug. 25, 2021. (Photo by Getty Images)
by Najla M. Shahwan Sep 10, 2021 12:05 am

Shaked further explained: “There will not be a Palestinian state in a government that we (Yamina) are party to.”

Earlier, Lapid told in a television channel that a two-state resolution could be advanced when the government rotates in two years’ time, but until then nothing can happen on this matter because Bennett would not support it.

For decades this has been the case. The so-called “peace processes” were only useful instruments and games for Israel to continue its occupation, grab more land and expand settlements.

June this year marked 55 years since the beginning of the Israeli military occupation of the Occupied Palestinian Territory (OPT), making it the longest occupation in modern history.

Fifty-five years on, Israel has, in fact, undertaken the de jure and de facto annexation of East Jerusalem and large parts of the West Bank, making it impossible to establish a sovereign, functional Palestinian state.

Since the start of the occupation, Israel immediately began imposing countless repressive measures such as administrative detention, deportation, home demolitions, transfer of Israel’s population into the OPT, establishing large scale residential, agricultural and industrial settlements, denial of Palestinian sovereignty over their natural resources including land and water, destruction and confiscation of private Palestinian properties in East Jerusalem, disproportionate use of violence, forcible transfer, restriction of movement and other forms of collective punishment against Palestinian civilians, inflicting enormous suffering and harm.

Israel has also attempted to change the status of the occupied territory and change its demographic composition through illegal confiscation of land and the transfer of Israeli civilians, attempting to justify many of these measures by citing its security considerations or military needs.

For years, the Israeli government claimed that the illegal Jewish settlements are built to serve security needs and considerations while in reality, the occupying power has been driven by an expansionist vision or ideology and, using its enormous military capabilities and a complex system of economic, legal and administrative policies and practices that have fervently pursued the implementation of this vision all through the West Bank and East Jerusalem, colonizing the whole territory.

Numerous United Nations resolutions and many U.N. Security Council (UNSC) resolutions have dealt with serious Israeli violations of the Fourth Geneva Conventions and other acts contrary to its provisions such as settlements, measures related to Jerusalem, deportations; indiscriminate shooting of civilians and collective punishment. All the resolutions condemned such illegal Israeli actions and called for their cessation and for full Israeli compliance with the provisions of the convention and the terms of those resolutions. However, Israel disregarded all and its grave breaches, and serious violations have continued extensively for almost 55 years.

The Israeli occupation has effectively denied the legitimate national rights of an entire people and resulted in severe structural distortions to Palestinian society and its economic activity.

On the other hand, Israel’s control of all Palestinian resources made the current shape of the Palestinian economy a small, poor, informal, service-based dependent economy, strongly susceptible to external shocks and struggles to ensure international aid, although aid has brought neither peace nor significant sustainable development to the OPT.

Despite the OPT being one of the highest per capita recipients of aid in the world in recent decades, the economy, security and many development indicators of the OPT have declined. This is due to a fundamental failure to ensure that aid commitments are underpinned by diplomatic and political pressure to end violations and allow Palestinians to claim their rights.

These humanitarian solutions failed to bring long-term sustainable change and continue to be needed, unless the root cause of these injustices – the occupation – ends.

The international community continues to turn a blind eye to Israel’s violations of international law and the abuse of human rights in the OPT.

Since 1967, there has been no effective external pressure on Israel to bring an end to its occupation and the UNSC has never applied any sanctions against Israel to force it to reverse its illegal territorial expansion.

Besides, far from sanctioning Israel for its occupation and colonization, the United States has showered it with privileges.

Since 1967, the U.S. has donated to Israel well over $100 billion in (mostly military) aid and it has protected it politically and internationally by vetoing resolutions critical of it in the UNSC.

In recent years, the U.S. has given it over $3 billion a year in military aid, making it the recipient of more U.S. tax dollars than any other state in the world, even though its gross domestic product (GDP) per capita is on a par with that of the European Union.

In January 2017, before then U.S. President Barack Obama left office, he guaranteed that Israel would receive at least $38 billion in unconditional military aid over the following 10 years and approved a $735 million weapons sales to the country. On the other hand, although incumbent U.S. President Joe Biden believes in a two-state solution to the conflict based on the pre-1967 lines, he has not put forward any initiative for the resumption of an Israeli-Palestinian peace process.

On its part, the EU’s two-state solution policy toward the conflict has remained steady over the years and continue to be the bloc’s core position on the Israeli-Palestinian conflict, but its condemnation of the litany of Israeli abuses is not enough if it does not press on the framework of the EU Neighborhood Policy, the EU-Israel Association Agreement and reassessing Israel’s participation in EU programs such as Erasmus and Horizon Europe.

The Israeli occupation has shaped the lives of Palestinians for generations and life under its military occupation continues to be a brutal reality.

Palestinians cannot endure another 55 years of occupation, and the international community must not “normalize the abnormal occupation.” It must fulfill its obligations to hold Israel accountable for its violations of international law and to end its belligerent occupation. Ending the occupation is the most important priority to enable Palestinians to build a viable economy, reduce humanitarian needs, advance development goals, ensure respect for their human rights and lay the foundation for any form of political rapprochement.