PKK/YPG Swiss 'liaison office': What next? 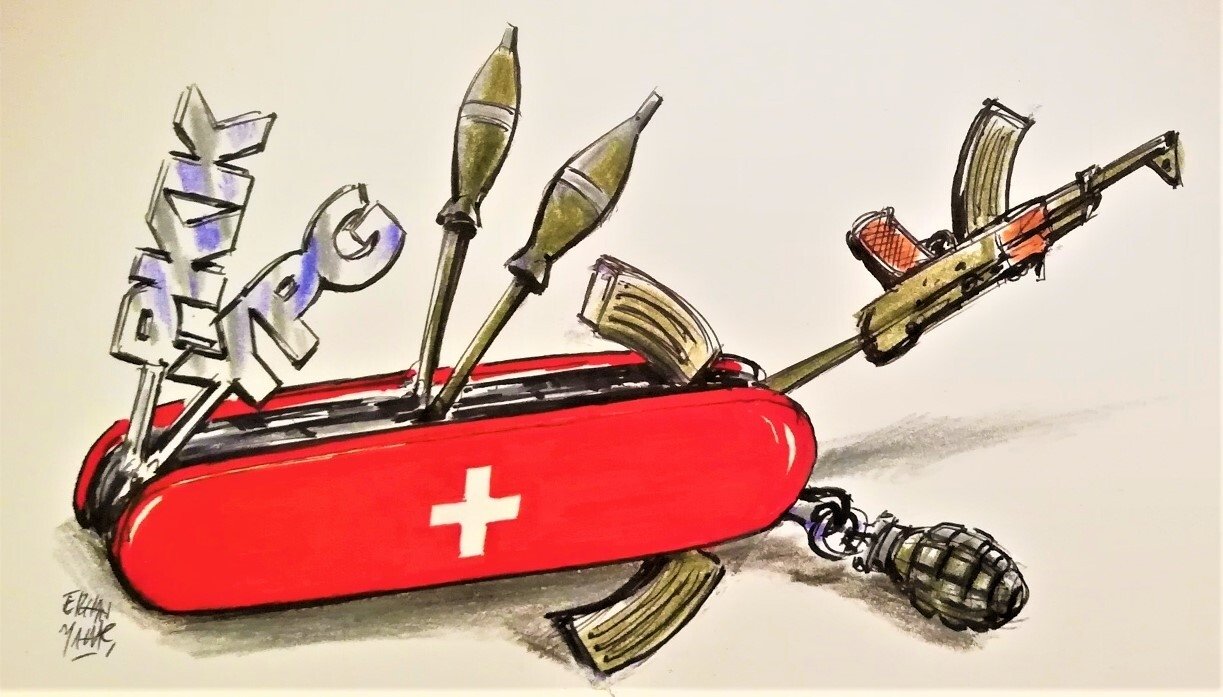 An illustration by Erhan Yalvaç of a Swiss Army knife with rifles, weapons and missiles to symbolize the recently launched YPG liaison office in Geneva, Switzerland.
by Klaus Jurgens Aug 18, 2021 12:05 am

The YPG, a branch of the PKK, listed as a terrorist organization by Turkey, the United States and the European Union, recently opened a liaison office in Switzerland. Europe must stop legalizing terrorist groups

One could not make this up – a terrorist network recognized as such by the European Union manages to open a liaison office in a country that forms part of the European Economic Area, Switzerland! Shockingly enough the Swiss government still will not list the PKK as a terrorist organization, hence apparently either do not want, or are not allowed, to block such a move.

But is there no exchange of intelligence between Brussels and their Swiss partners? Do Swiss authorities overlook the fact that the PKK is responsible for the death of over 40,000 people?

And above all else, why are they turning a blind eye toward the fact that the YPG is not a seemingly "democratic" movement but an integral part of the PKK terrorist network itself?

The name of the liaison office – which opened last Monday in Geneva, a city normally known for defending human rights as it is one of the major seats of the United Nations – makes it sound as if it is a legitimate humanitarian institution: Representation of the Autonomous Administration of Northern and Eastern Syria.

Yet the people behind that structure are supporters of otherwise hard-core terrorists trying to sneak into the hearts and minds of unwitting European authorities and, unfortunately, ordinary citizens who are not exposed to fair and honest reporting about Turkey and the wider region due to a blanket Turkey-bashing strategy present in most mainstream continental media.

Their real aim is not to help promote economic welfare in parts of Syria – their real aim is to divide the Republic of Turkey by creating a rogue state across internationally defined borders. If that does not constitute terrorism, then what would?

Democracy and the heralding of human rights including international solidarity with people in need, especially those affected by civil wars or other human-made catastrophes and atrocities, is a core element of post-war Europe.

Quite naturally, young people and student representatives, in particular, got on board with almost every fight for overturning any dictatorship in all four corners of the globe.

Having learned their lessons from the barbarism of a German fascist regime – actually, a number of fascist regimes, such as Mussolini’s Italy or Pinochet’s Chile, spring to mind – they vowed to never again let democracy and libertarianism be wiped out by evil-minded individuals and their political offshoots.

However, terrorists from outside of Europe cleverly manipulated those movements and infiltrated their ranks with less democratically inclined individuals.

European student movements became globally oriented and it was not exceptional that, for example, a left-leaning EU-based movement sends delegates to Nicaragua in the mid-1980s to eventually help bring Daniel Ortega to power.

About the same time, a newly formed terrorism network soon to be named the PKK came into being in Turkey.

Not knowing, and not properly researching what it stood for, many far-left youth leaders in Europe automatically took their ill-fated case on board and defended whatever the terrorists had in store against the Republic of Turkey as part of a wider "freedom fight" for Kurdish independence.

Yet what those who supported the PKK misunderstood was that almost all citizens living in the southeastern part of the Republic of Turkey never ever wanted a "free Kurdistan" as they already lived in a "free Turkey."

Granted, there was always a debate for greater autonomy within the boundaries of a modern republic, the democratic nation-state as we know it.

Most topics concerned a fairer share of the growing economic welfare, the use of the Kurdish language in public and obtaining news in the language as well.

And, step by step, these goals were achieved including massive infrastructure investments. To present the outcome of one of those day-to-day issues we only have to take a look at the town hall in Şanlıurfa, where from 2012 onwards many languages were officially spoken, including Kurdish.

This is not separatism; this is taking care of everyday life’s affairs in a more proactive manner. Think of England, where each public library officially uses eight or nine languages in all handouts and instructions on how to loan a book.

Language matters, and Turkey has embraced an all-inclusive strategy that has worked out well. Having a camouflaged terrorist presenting himself as a freedom fighter come knocking on your door, asking for a donation to split the country? No such luck.

Since the onset of the new millennium, the concept of “One Nation” ("Tek Türkiye" in Turkish) has become ever more the order of the day. Separatists are no longer welcome, if they ever were. And what kind of separation would they want to achieve in the first place?

The PKK is a terrorist group and not a freedom fighters club. By either infiltrating existing nongovernmental organizations (NGOs) or setting up new ones in Europe, they manage to portray themselves as the victims, the good guys while assuring their unwitting audiences that, whatever the Republic of Turkey does, it is the bad guy.

It is as if time stood still, and I am not referring to the past 18 months where due to COVID-19 the world did indeed stand still. The PKK has placed their offshoot, the YPG, on European soil in a bid to try to repeat history. Most surprisingly, they still seem to find a fertile breeding ground for their terrorism campaign in the middle of Europe.

This brings us a related point, an issue that under normal circumstances should help to finally open the eyes of the European public and their elected officeholders. Could the PKK strike at the heart of Europe, too?

The PKK and their remaining core members hiding in the mountain range southeast of the Turkish border will soon lose their last fight. Their bosses will come to terms with the fact that dividing a democratic Turkey without the slightest support from the very people they claim to represent is a fool's errand. But what would those "seasoned" militia people do with the rest of their life?

Hopefully, all those kidnapped youngsters and those innocent young people conned into believing the PKK has something positive to offer will manage to flee or be liberated by the Turkish Armed Forces (TSK) and reunited with their families to have their future restored. But there will also be a significant number of hard-core terrorists soon looking for terrorist playgrounds elsewhere.

The great danger in having the PKK/YPG opening a representative office in Europe – and rest assured they will try Germany, Belgium and other countries – is that this is the first clear sign of the group repositioning itself.

What will their new purpose be? Reading books, acting like an old man’s tea-drinking club? Most definitely not.

The PKK is against modern Turkey and against those proud citizens of Kurdish background. They want to create a dictatorship in the name of liberty.

It is not impossible that this criminal road map could be transported onto European soil, as much of PKK's money laundering via fundraising, drug trade and human trafficking is taking place there anyhow.

The YPG opening an office at the heart of European democracy must be seen as a warning sign by all European governments. The Swiss authorities would be well advised to at once withdraw their support and swiftly declare the PKK as exactly what it is: a barbaric, heinous, dangerous terrorist group no matter their dwindling numbers of activists.

Their falling numbers are surely the only reason for the YPG to go Europe so to speak – to recruit suicide bombers and other murderers. The big question remains: where are their future targets for atrocities located? Wake up Switzerland, wake up Europe! Please!