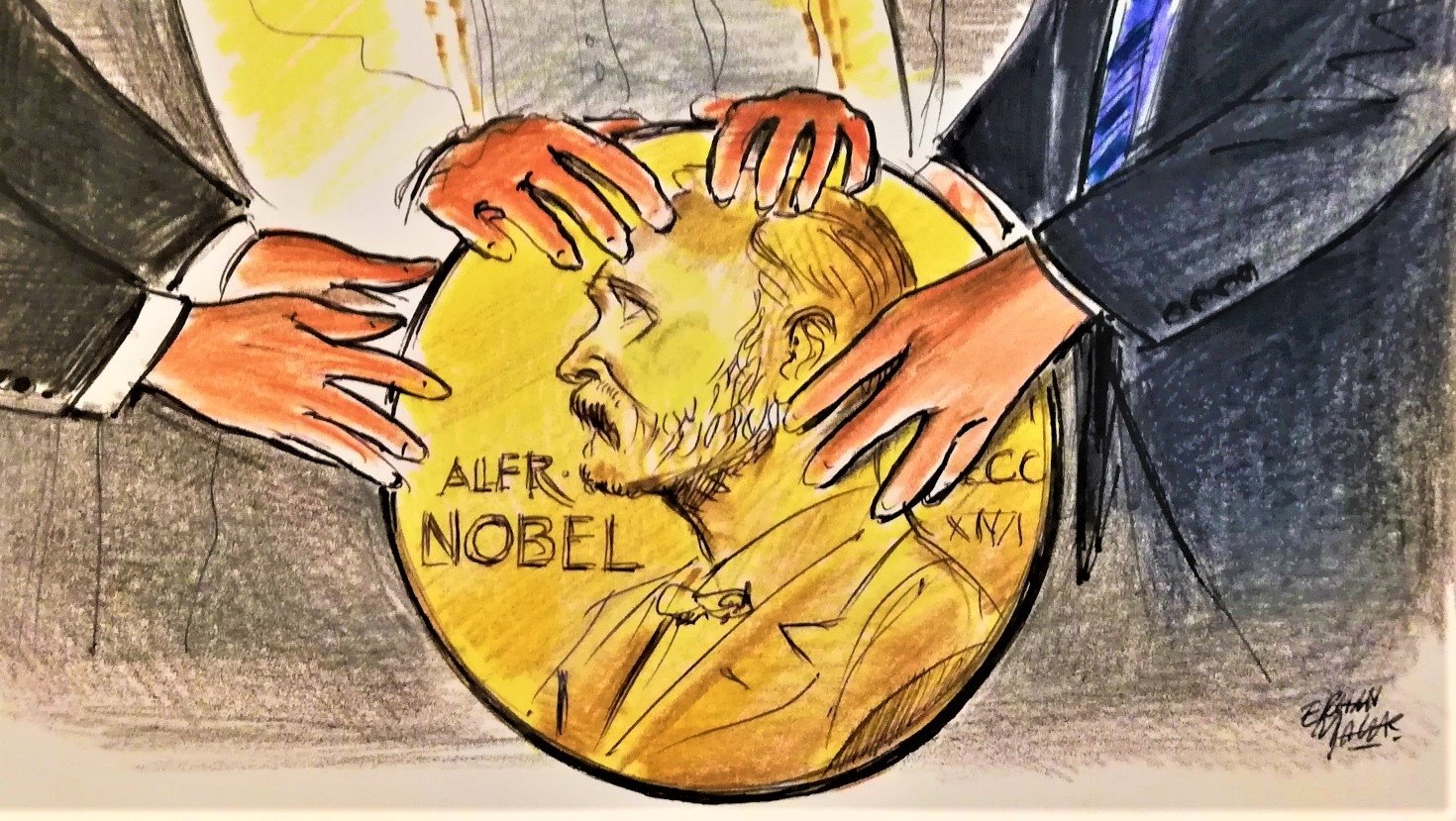 In this illustration by Erhan Yalvaç, the Nobel Peace Prize resembles a symbolic "orb," on which former U.S. President Donald Trump, Saudi Arabia's King Salman and Egypt's usurper president, Abdel-Fattah el-Sissi lay their hands together to harbinger their renewed relations during a meeting in Saudi Arabia's Riyadh in 2017.
by Najla M. Shahwan Apr 01, 2021 12:05 am
RECOMMENDED

Former United States President Donald Trump’s four-year presidency failed rapidly as he could not master or comprehend the government that he had inherited. He was the most unpresidential president in history, saying and doing what no other U.S. president has done before.

Despite departing from the behavior of every previous U.S. president, Trump has somehow been nominated for the Nobel Peace Prize.

It's true, Trump has recently been nominated for the 2021 Nobel Peace Prize. However, it is not the “outstanding thing” he is making it out to be. There are 318 candidates for the upcoming Nobel Peace Prize – 211 are individuals and 107 organizations.

Any one of thousands of people can nominate someone for the prestigious award, and two people have come forward saying they nominated Trump.

But on its website, the Nobel Committee warns not to attach too much importance to a nomination.

“Any person or organization can be nominated by anyone eligible to nominate,” the committee states. The Norwegian Nobel Committee has no input into submissions, though it decides who actually wins the prize. “To simply be nominated is therefore not an endorsement or extended honor to imply affiliation with the Nobel Peace Prize or its related institutions,” the committee states.

Nonetheless, Trump has promoted the nomination repeatedly at campaign rallies, on Twitter and in TV ads.

Besides, he previously implied that he deserved the prize after Ethiopian Prime Minister Abiy Ahmed won the award in 2019. In remarks made in January 2020, Trump claimed he, not Abiy, was key in brokering peace in the African nation and did not formally congratulate Abiy.

On Sept. 9, 2020, Christian Tybring-Gjedde, a far-right Norwegian politician, announced on Fox News that he had nominated Trump for a Nobel Peace Prize.

Tybring-Gjedde also submitted a nomination for Trump in 2018, following the then-U.S. president's summit with North Korean leader Kim Jong Un but Trump did not win the award.

“For his merit, I think he has done more trying to create peace between nations than most other Peace Prize nominees,” Tybring-Gjedde said.

In his nominating letter, Tybring-Gjedde cited Trump’s role in establishing relations between Israel and the United Arab Emirates (UAE). He also cited Trump’s “key role in facilitating contact between conflicting parties besides, creating new dynamics in other prolonged conflicts, such as the Kashmir border dispute between India and Pakistan and the conflict between North and South Korea, as well as dealing with the nuclear capabilities of North Korea.”

Two days later, Magnus Jacobsson, a member of Sweden’s Parliament for the Christian Democrats, announced via Twitter that he, too, had nominated Trump for the award, along with the governments of Kosovo and Serbia “for their joint work for peace and economic development.”

I have nominated the US Gov. and the governments of Kosovo and Serbia for the Nobel Peace Prize for their joint work for peace and economic development, through the cooperation agreement signed in the White House. Trade and communications are important building blocks for peace. pic.twitter.com/XuhkLbHZAV

Nominations for a Nobel Peace Prize can be made by any one of perhaps hundreds of thousands of eligible people including, according to the Nobel website, “university rectors or chancellors, professors of political and social science, history, philosophy, law and theology; leaders of peace research institutes and institutes of foreign affairs, members of national assemblies, governments, and international courts of law, previous Nobel Peace Prize Laureates, board members of organizations and institutions that have received the Nobel Peace Prize, present and past members of the Norwegian Nobel Committee, and former advisers of the Norwegian Nobel Institute.”

The Nobel Committee does not provide a list of the nominees. In fact, the names of nominees, and who nominated them, are not released by the Nobel Committee for 50 years and only leak out when people make them public, as Tybring-Gjedde and Jacobsson did.

Why should he win?

Trump has been the worst president America has ever had. He failed to put the national security interests of the U.S. ahead of his own political needs and in the face of a devastating pandemic, he was extremely worn out, unable or unwilling to marshal the requisite resources to save lives, while actively encouraging public behavior that spread the disease. When held to account by voters for his failures, he refused to concede defeat and instead instigated an insurrection, stirring a mob that stormed the U.S. Capitol.

Trump’s heartless and unskilled approach to immigration, his use of tax policy to punish states that didn’t vote for him, his diversion of public funds to properties owned by him and his family, his hasty and self-sabotaging approach to trade, and his irritability toward long-established allies alone assured that he would not be seen as a successful, skillful president.

His foreign policy failed too, especially in the Israeli-Palestinian conflict as he ignored the rights of the Palestinians and closed his eyes to their history in their homeland. He was biased toward Israel and offered it what no other U.S. president dared to give. Regarding peace between the UAE and Israel, there was never any war between the two countries and they had already had secret relations years ago.

Feb. 1 was the deadline for all nominee submissions while between March and August, the shortlist will be reviewed by advisers and eventually, in October the Nobel Committee will choose the winner through a majority vote.

The Nobel Peace Prize holds a significant role in the public imagination and is the ultimate indicator of the positive role a human being can play in the world, but Trump has done nothing to deserve it and if by any chance he wins, it will lose much of its worth and value.