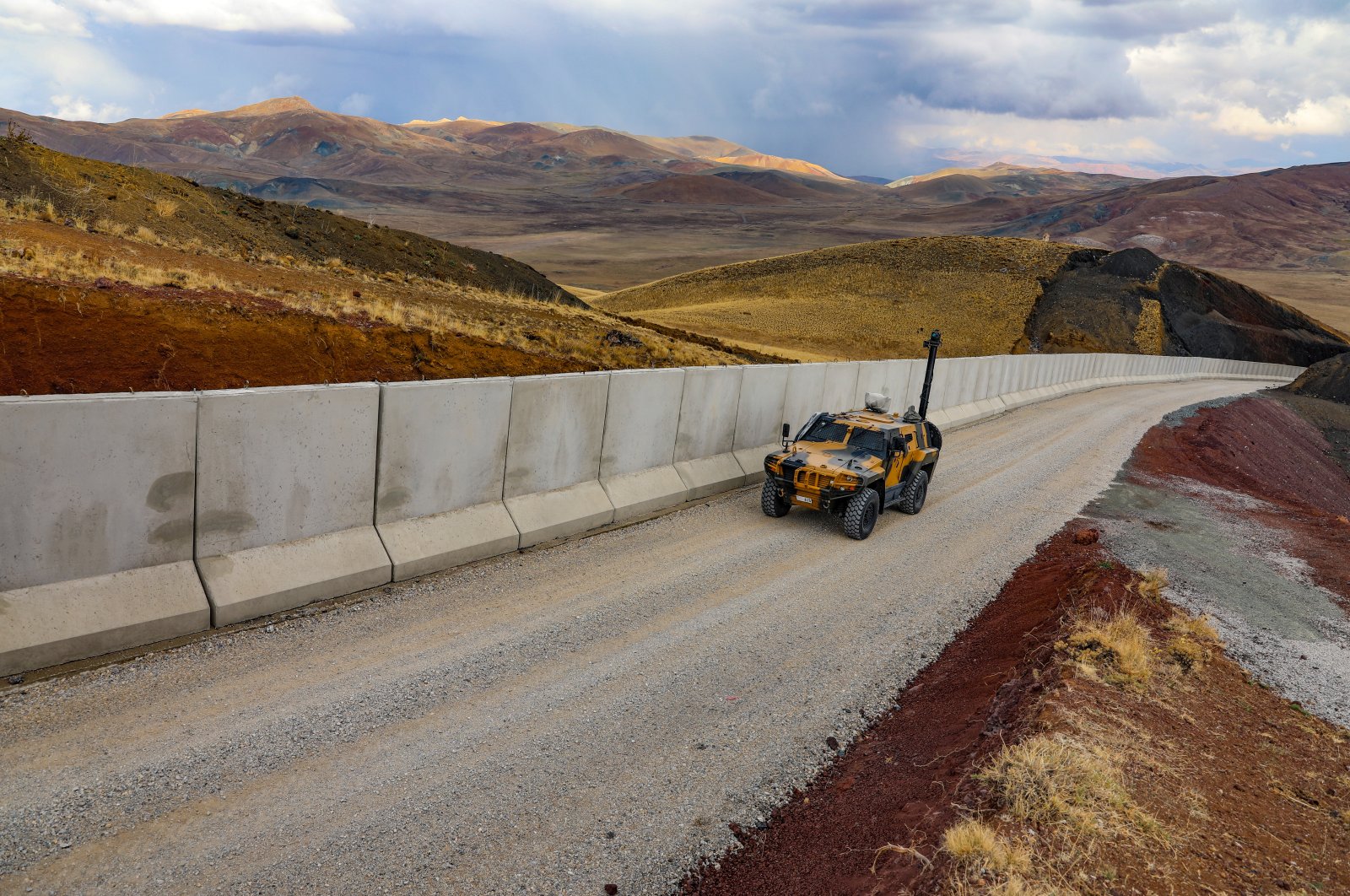 As Turkey's efforts to ensure border security against irregular migration and smuggling activities continue, the 20-kilometer (12-mile) section of the security wall in the Çaldıran district of the eastern province of Van, on the Iranian border, has been completed.

In Van, which has the longest border with Iran, the security forces are taking every precaution possible to prevent illegal crossings, smuggling activities and the infiltration of terrorists by constantly monitoring and patrolling the border with armored vehicles.

Irregular migrants who want to cross into Turkey through the border, which is kept under constant surveillance with unmanned aerial vehicles (UAVs) and optical towers, are apprehended and handed over to the Provincial Immigration Administration Removal Center.

The construction of the wall, which was initiated to prevent illegal crossings on the route extending from the Çaldıran border to the eastern Ağrı Doğubayazıt and southeastern Hakkari Yüksekova line, continues.

Stating that the demining works have been also completed in parts where it was deemed necessary for safety, Bilmez said that the tender works for the remaining 230-kilometer border line are continuing.

Emphasizing that there are serious security measures at the border, Bilmez said: "The 6th Border Brigade operates at the border on a 24/7 basis. Some 750 Special Operations police were sent to them as reinforcements. These police officers support the border unit with 35 teams of 50 vehicles. Three reinforced, one normal commando squadron from the gendarmerie were also deployed to the region. At the same time, UAVs and drones have also been sent there along with thermal cameras. Some of the 58 surveillance and 104 optical towers built in the region have been commissioned. The thermal system of these towers is also being utilized."

Bilmez noted that with the measures taken at the border, the number of irregular immigrants entering the country decreased significantly and many organizers were caught.

Emphasizing that they intend to show the world that their border is impenetrable due to the tough security measures, Bilmez said: "There has been a significant decrease in the number of irregular migrants with the security measures. Thanks to the intelligence work we have done this year, 1,290 organizers have been apprehended. Nearly half of them have been arrested. This figure has increased from just 599 in the whole of last year. We demolished 138 'shock houses' where migrants were hiding. Apart from that, there is a significant decrease in the number of immigrant groups we catch. Those numbers, which were previously stated as 100, are now around five to 10."

In the face of a new potential migrant wave due to the instability in Afghanistan, Turkey has maximized measures on its eastern border. Turkey is continuing efforts to bolster the security of its border with Iran to prevent any new migrant wave in the face of the recent developments in Afghanistan. The beefed-up border measures in Turkey, which already hosts nearly 4 million Syrian refugees and is a staging post for many migrants trying to reach Europe, began as the Taliban started advancing in Afghanistan and took over Kabul last month.

Turkey is not the only country putting up barriers. Its neighbor Greece has just completed a 40-kilometer fence and surveillance system to keep out migrants who still manage to enter Turkey and try to reach the European Union.

Referring to the measures taken in Lake Van, one of the transit points of irregular migrants, Bilmez also said: "Our teams are patrolling in and around the lake. The radar system on the newly arrived boats has made our job much easier. We saw a 57-person boat on an inflatable boat, which we came across mostly in the Aegean Sea the other day. We caught the migrant group. As our teams approached, the boat started to take on water. If the coast guard had not arrived, we would have faced another disaster."

Turkey has launched a new unit to prevent smuggling activities and ensure security on Lake Van. The Turkish Coast Guard Command has been playing an active role in preventing irregular migrants from being taken to other provinces by boat.