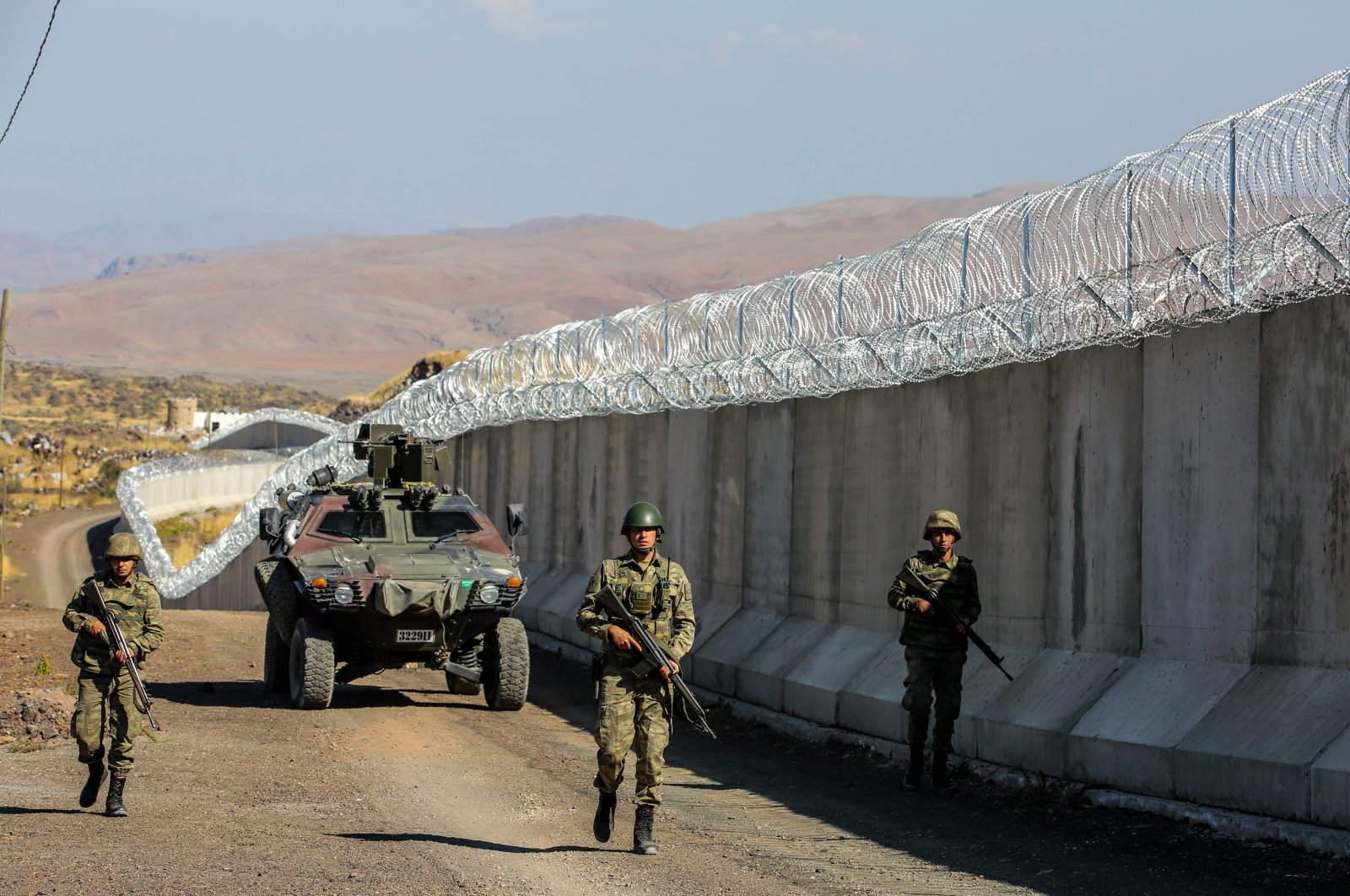 Turkish security forces continue to patrol 24/7 to prevent a new influx of illegal Afghan migrants after the Taliban's takeover of the country. Turkey's eastern border with Iran is protected by the tightened measures, including a modular wall, observation posts and trenches, which are all are supported by the latest technology.

Nearly total mobilization on the Iranian border has been initiated to prevent illegal crossings. The Turkish Armed Forces (TSK), connected to the Defense Ministry, do not allow any illegal foreign elements near the borderline, bolstered by the slogan of "the border is honor." Thousands of Police Special Operations (PÖH) and gendarmerie teams, connected to the Interior Ministry, are also patrolling just behind the border.

On the borderline, culverts and river beds where illegal migrants can hide are also searched thoroughly. In an around-the-clock effort, the security forces of the Defense Ministry and the Interior Ministry diligently work to prevent irregular migration on the Van-Iran border.

The security wall between the eastern provinces of Iğdır and Ağrı was completed to prevent illegal crossings. The modular wall work on Van's border with Iran continues. When the wall, which will extend to the Doğubayazıt line of Ağrı and the Yüksekova line of Hakkari, is completed, there will be a 295-kilometer (183-mile) wall on the Iranian border of Van.

Special Mine Search and Clearance Battalion Command teams affiliated with the Ankara Gendarmerie Engineering Command in the region are also clearing the mines on the border so that construction of the wall and trenches can be carried out safely.

Also, concrete blocks with a height of 3 meters, a width of 2 meters and 80 centimeters, and a weight of 7 tons, which are produced in concrete batching plants established by contractor companies, have been installed on the borderline, the ground of which has been prepared beforehand with construction equipment.

While construction on the wall continues, the security forces guarding the borderline in Van provide border security with patrol and surveillance activities during the day and thermal and night vision cameras at night. The security forces, which keep the region under control with unmanned aerial vehicles (UAVs), planes, drones and helicopters from the air, are trying to prevent migration movements through their successful operations.

Nine battalions of the 6th Border Brigade Command and soldiers serving in 44 police stations in the region are working to ensure security on the Iranian border with patrol and surveillance activities. In the region, two reconnaissance units, two commando companies, three companies and a battalion from the Gendarmerie General Command and 750 special operations police from the General Directorate of Security were sent to the region with their armored vehicles.

Van Governor Mehmet Emin Bilmez said that ditches were dug on the border, and a modular concrete wall and optical watchtowers were built. Bilmez said: "The construction of the new tower continues. The border units of the Land Forces patrol on a 24-hour basis. Gendarmerie units are on duty on the second line. Special operations police from outside the province also assist both the gendarmerie and the border troops. The statistical data we have does not show that this year's figures have increased compared to the past. On the contrary, I can say that there has been a greater increase in the number of people blocked at the border with the measures taken."

Following a five-hour Cabinet meeting at the Presidential Complex in the capital Ankara, President Recep Tayyip Erdoğan late Thursday said that, "Turkey does not have any obligation whatsoever to be a safe haven for Afghan refugees."

Addressing the public concerns regarding a possible refugee wave, Erdoğan also said that Turkey would ensure the refugees' safe return.

Regarding irregular migrants, Erdoğan said at least 235,000 Afghans have been sent back.

"It is our obligation to Turkish citizens to ensure the refugees’ safe return to their home countries," he said.

The president also affirmed his country's commitment to Afghanistan's "stability and security" and said Ankara could hold talks with the new government.

"We will meet with the government formed by the Taliban if necessary and discuss our mutual agendas," Erdoğan said.

"We will transfer our citizens, who are still waiting in line for their return, whose number is below 300, to our country as soon as possible," he added.

Concerns have risen over a possible spike in migrants from Afghanistan, due to the United States' pullout from the country and the following surge of Taliban attacks.

Turkey has deployed additional reinforcements to its eastern border with Iran, and new measures are expected to be applied. Border security will be supported by technological systems to prevent a fresh influx of migrants.

Turkey has made it clear that it will not bear the burden of the migration crises experienced as a result of the decisions of third countries.

Turkey appreciates the Taliban’s moderate statements and their pledge not to revert to their previous hard-line rule, President Erdoğan said late Wednesday, adding that Turkey is still prepared to protect Kabul airport following the Taliban takeover and is talking with all concerned parties.

NATO member Turkey, which has hundreds of troops in Afghanistan, was discussing a proposal with the U.S. on keeping Turkish forces in the country to guard and run Kabul airport after the withdrawal of other NATO forces.

Ankara has been in talks with U.S. defense officials since offering to help secure and run Kabul airport, which is key to allowing countries to retain a diplomatic presence in Afghanistan after the U.S. troop withdrawal. But the swift Taliban takeover has left the Turkish plan in limbo.

American officials say they continue to talk to Ankara about security arrangements for the airport and have expressed gratitude for the role of Turkey in evacuating civilians from Kabul.