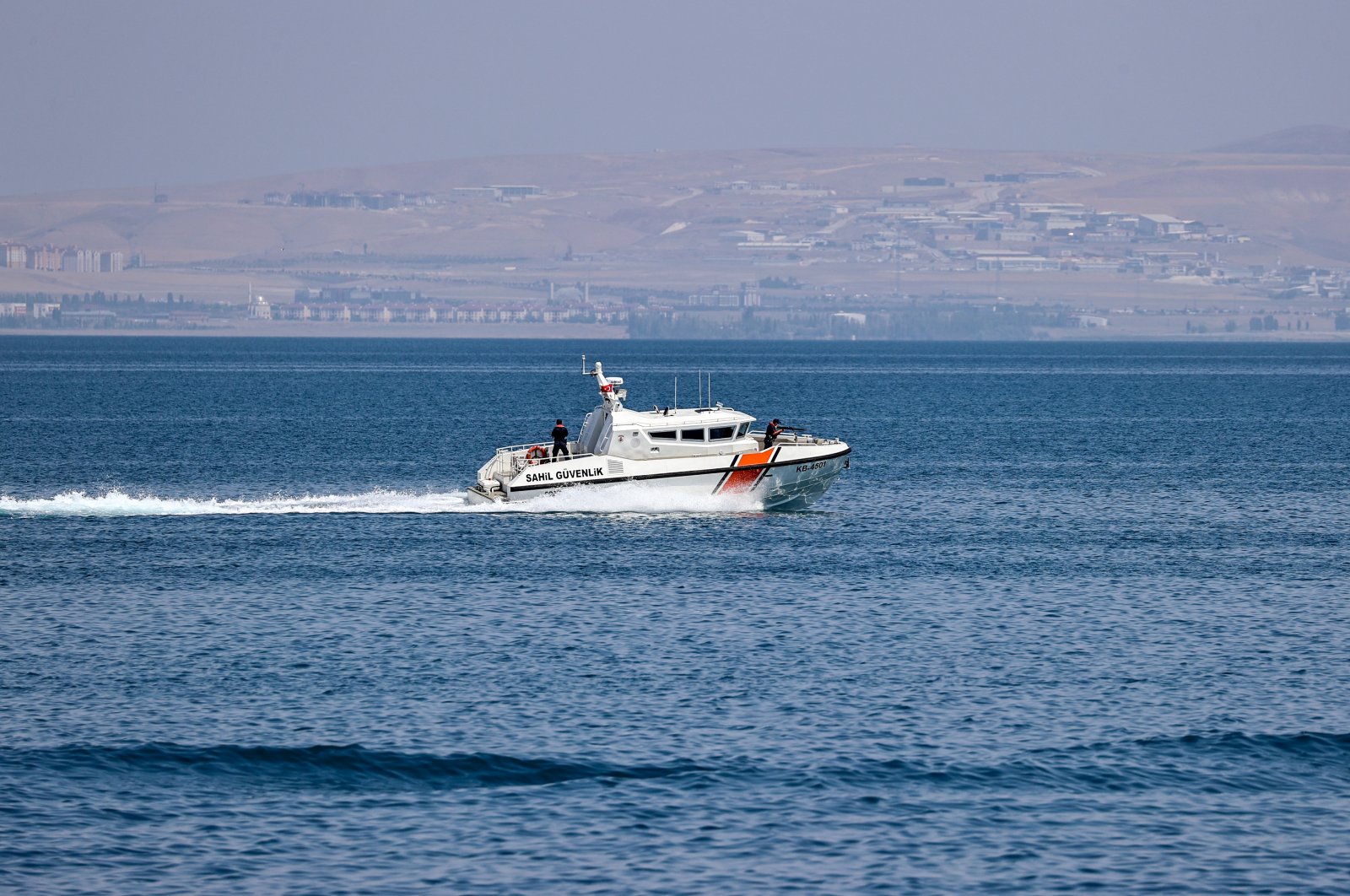 Turkey has launched a new unit to prevent smuggling activities and ensure security on Lake Van. The Turkish Coast Guard Boat Command will play an active role in preventing irregular migrants from being taken to other provinces by boat, according to officials on Saturday.

Due to the recent developments in Afghanistan, measures have been taken to prevent irregular migrants from trying to enter Turkey illegally through its eastern border with Iran.

To prevent irregular migrants crossing the border illegally from being taken to other provinces through Lake Van, the Coast Guard Boat Command was established by the Interior Ministry.

The Command, which started its operations in a landlocked region for the first time, will both ensure security on the lake and play an active role in preventing irregular migrant smuggling.

The coast guard elements currently deployed in the eastern Van province's Edremit district will keep Lake Van – which has an area of ​​3,713 square kilometers (1,433 square miles) – under 24/7 surveillance.

Having all the technological facilities, including thermal and night vision cameras, radar and sonar devices, the Command will ensure security throughout the lake.

The teams, which continue their patrol activities with two boats and a team of 15 people, will officially start their duties as of Sept. 1.

Van Governor Mehmet Emin Bilmez told Anadolu Agency (AA) that they have increased security measures against smuggling and irregular migration across the province.

Stating that they have taken high-level measures in the city center and its surroundings, he said that some measures have also been taken on Lake Van.

Emphasizing that the Coast Guard Boat Command will now be in charge of security on Lake Van, Bilmez said the newly established unit will be responsible for the entire lake.

"The sole reason for the establishment of the new unit is to completely prevent migrant smuggling on the lake," he added.

Most recently, the Turkish president in a phone call with the German chancellor on Saturday warned of a possible wave of migration if necessary measures are not taken in Afghanistan and Iran.

Recep Tayyip Erdoğan and Angela Merkel discussed the developments in Afghanistan, particularly the issue of migrants, along with regional issues and bilateral relations, according to a statement by Turkey's Communications Directorate.

Erdoğan stressed that a new wave of migration is inevitable if necessary measures are not taken in Afghanistan and Iran.

"It is essential to prevent a humanitarian tragedy in the face of migration from Afghanistan and provide urgent assistance to these people in Afghanistan and neighboring countries," he noted.

Turkey also had talks with Iran and increased the measures along the Iranian border, Erdoğan said, adding that Europe has important duties to resolve the issue of irregular migration from Afghanistan as soon as possible before it turns into a crisis.

The new government to be established in Afghanistan should be inclusive, representing all Afghan people, he said, stressing that it is important to start talks between the Taliban and Afghan leaders in Kabul on peace and security issues.

Meanwhile, referring to the developments in Afghanistan, Erdoğan said, "Turkey can continue to take the responsibility for the security and operating of the Kabul airport under relevant conditions."

NATO member Turkey, which has hundreds of troops in Afghanistan, was discussing a proposal with the U.S. on keeping Turkish forces in the country to guard and run Kabul Hamid Karzai International Airport after the withdrawal of other NATO forces.

Ankara has been in talks with U.S. defense officials since offering to help secure and run the Kabul airport, which is key to allowing countries to retain a diplomatic presence in Afghanistan after the U.S. troop withdrawal. But the swift Taliban takeover has left the Turkish plan in limbo.

Following a five-hour Cabinet meeting at the Presidential Complex in the Turkish capital Ankara, Erdoğan late Thursday said, "Turkey does not have any obligation whatsoever to be a safe haven for Afghan refugees."

Concerns have risen over a possible spike in migrants from Afghanistan, due to the United States' pullout from the country and the following surge of Taliban attacks.

Turkey has deployed additional reinforcements to its eastern border with Iran, and new measures are expected to be applied. Border security will be supported by technological systems to prevent a fresh influx of migrants.

Turkey has made it clear that it will not bear the burden of migration crises experienced as a result of the decisions of third countries.