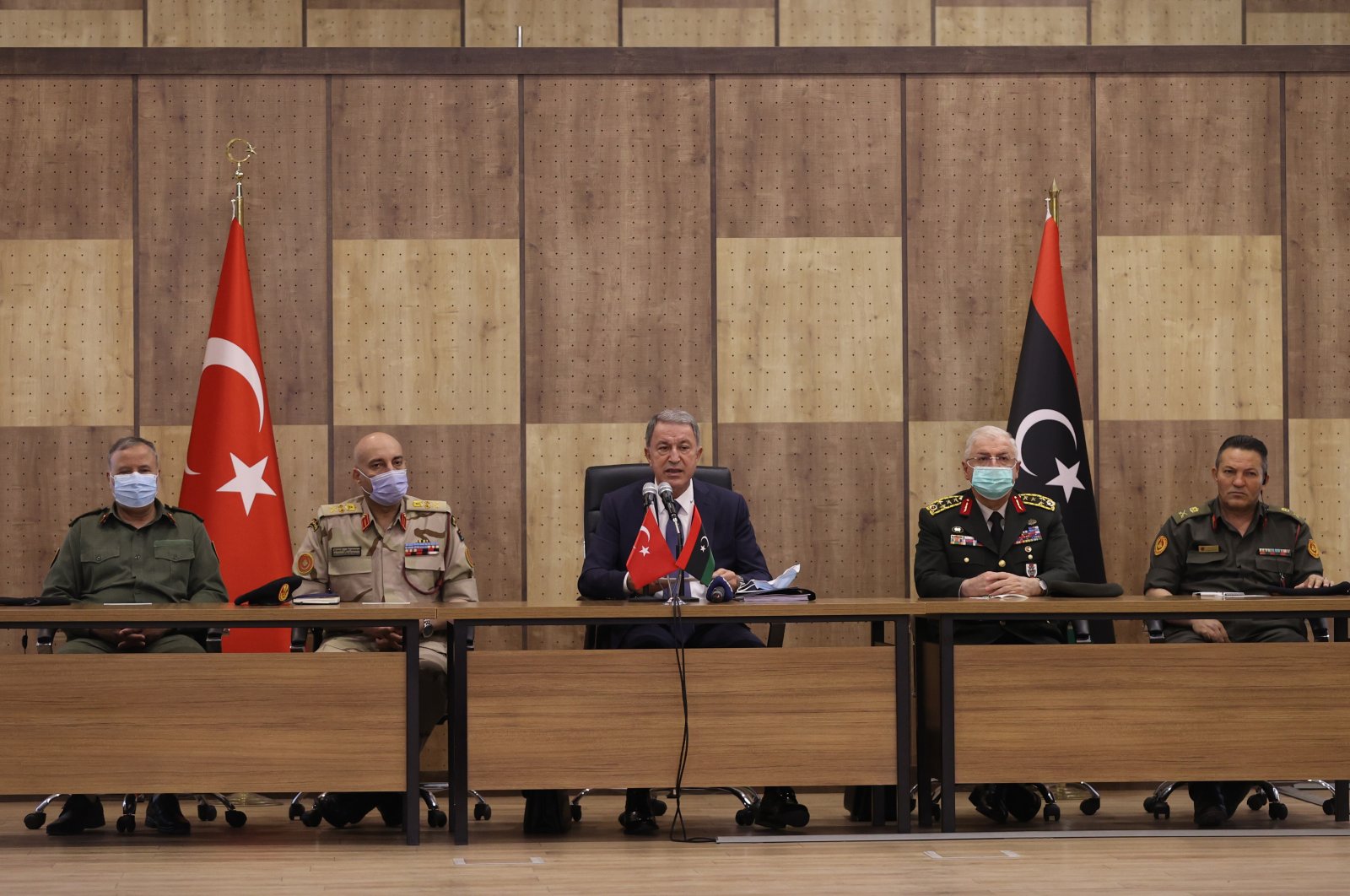 During a high-level delegation visit to Libya, Turkish officials reiterated the importance of Libya’s integrity, sovereignty and political unity, underlining the close cooperation between the two countries

Turkey's Defense Minister Hulusi Akar on Tuesday underlined the importance of Libya's sovereignty and independence, noting Ankara's efforts to resolve the problems in the conflict-torn country.

Akar, along with Chief of General Staff Gen. Yaşar Güler and senior Libyan military officials, visited Turkish troops in Libya amid a high-level visit by Turkey’s top diplomatic and military officials to Tripoli. Speaking there, Akar said: "Libya's sovereignty and independence are important. When we came here, there were various problems. We spent all possible efforts in order to resolve these issues. These efforts came to a point where we have started obtaining important results."

Turkey will continue to side with friendly and brotherly countries in their legitimate and just causes, in addition to its own struggle to protect its own rights and interests, Akar said.

Highlighting the common history and values that the two countries share, Akar said that Turkish soldiers in Libya aim to protect the rights of their Libyan brothers and support them.

Reiterating that Libya belongs to Libyans and Turkey supports a united sovereign Libya, Akar said: "For the restructuring of armed forces here, and the modernization of the organization, our Libyan brothers continue their works shoulder to shoulder with Turkey."

The memorandum on maritime boundaries asserted Turkey's rights in the Eastern Mediterranean in the face of unilateral drilling by the Greek Cypriot administration, clarifying that the Turkish Republic of Northern Cyprus (TRNC) also has rights to the resources in the area. Following the military cooperation deal, President Recep Tayyip Erdoğan had said Ankara might consider sending troops to Libya if the Libyan government requested it.

Following the deal, the GNA made a formal request for "air, ground and sea" support from the Turkish military to help fend off an offensive by forces loyal to putschist Gen. Khalifa Haftar, who was attempting to take control of the capital, Tripoli. Turkey supported the GNA against Haftar's militia and mercenaries. In early 2020, Turkey has begun deploying troops in Libya to provide consultation and training services to the Libyan Army.

"Until 2020, there was no Turkish presence in Libya. We are a friend for bad times, not good times. In this context, we took every risk by being loyal to our common history and values, and we will keep doing it. The important thing is our unity and solidarity, Libya to reach peace and stability and the continuation of the cease-fire," Akar said.

Recalling Haftar forces' killings of innocent people in Tripoli and mass graves in Tarhuna, Akar promised that Turkish officials will continue their efforts including the services of clearing mines and explosives, education, assistance and consultation for the normalization of life in Libya.

According to Libyan official sources, Haftar's forces and affiliated militias committed war crimes and acts of genocide in the period between April 2019 and June 2020. New York-based Human Rights Watch (HRW) said more than 300 people had been abducted or reported missing in the past in Tarhuna. The Libyan government has repeatedly called on the U.N., the International Criminal Court (ICC) and human rights groups to demand an international investigation into the mass graves.

Upon the request of the Libyan government, demining experts from the Turkish Armed Forces (TSK) last year started clearing civilian areas in Libya to prevent accidental explosions and ensure the safe return of civilians to their homes located in areas liberated from Haftar forces. Turkish demining experts and Turkish Special Forces have started work to ensure security and a return to normalcy in such areas.

Akar also reiterated Turkey's support for the new interim government led by Prime Minister Abdul Hamid Dbeibah in Libya and said that the government must be backed by the relevant parties for the continuation of stability and peace until the scheduled elections in December.

Selected through a U.N.-led process, Libya’s new interim government, the Government of National Unity (GNU), was sworn in on March 15, created from two rival political groups that had ruled eastern and western regions, completing a smooth transition of power after a decade of violent chaos. The new interim government, led by Dbeibah, will lead the country to elections in December.

Turkey had backed the internationally recognized Tripoli-based GNA against the eastern-based forces of Haftar, which was supported by Russia, Egypt, the United Arab Emirates (UAE) and France. Libyans hope that the new process will end years of civil war that has engulfed the country since the ousting and killing of strongman Moammar Gadhafi in 2011.

“We attach great importance to the preservation of Libya’s integrity, sovereignty, independence and political unity," Çavuşoğlu said at a joint news conference with his Libyan counterpart Najla al-Mangoush. The minister reiterated that Turkey has always stood by the Libyan people and their legitimate governments during their difficult times.

“In the face of the attacks on Tripoli, the legitimate government of Libya invited some countries, including us. Only Turkey replied in the affirmative to this call,” Çavuşoğlu said.

He also stated that Turkey’s support for Libya under the deal on security and military cooperation prevented a civil war and human tragedy. The two top diplomats, Çavuşoğlu said, addressed economic cooperation, investments in Libya and bilateral trade relations, and discussed the return of the Turkish private sector to Libya.

For her part, al-Mangoush stressed the “importance of Turkey’s contribution to ending the fighting and the stabilization of the cease-fire throughout the country.”

She noted that they called on Turkey to cooperate over the withdrawal of foreign troops and mercenaries from the country, to help bolster a seven-month cease-fire.

Çavuşoğlu and the delegation also met with Dbeibah, the head of Libya's Presidential Council, Mohammad Younes Menfi and other officials. Çavuşoğlu also met with Jan Kubis, U.N. special envoy for Libya, and discussed the latest developments in the county, stressing Ankara's strong support for the political process.

During a Libyan delegation's visit to Turkey last month, the two countries reiterated their commitment to enhancing bilateral ties and the maritime deal while Erdoğan underlined that Ankara prioritizes Libya's sovereignty, territorial integrity and political unity. Turkey and Libya also agreed to further their cooperation in multiple areas over a series of meetings, including in the fields of oil and natural gas.