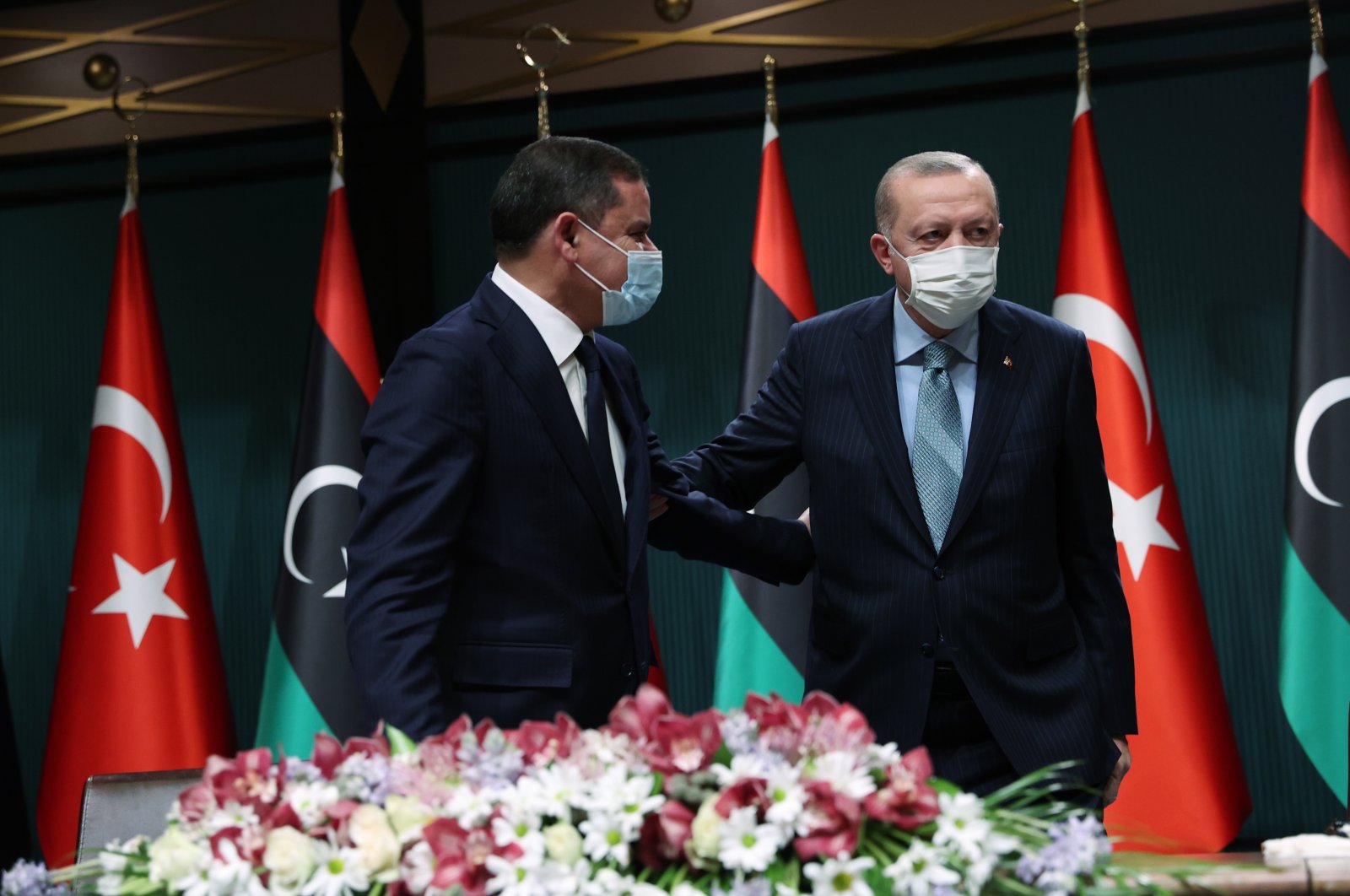 Ankara and Tripoli will continue to cooperate to their mutual benefit in the new period ushered in by the establishment of an interim government in the war-torn country, experts say, in the wake of the Libyan delegation's visit to Turkey last week led by Prime Minister Hamid Dbeibah that highlighted the solidarity and partnership between the two countries.

“It was a visit that proved the friendship built during bad times will continue as the same way in good times. The partnership based on a win-win principle will be continued by this government until the elections,” Enes Canlı, Anadolu Agency’s (AA) Libya correspondent, told Daily Sabah.

Bilgehan Öztürk, a researcher at the Foundation for Political, Economic and Social Research (SETA), also said that Turkey holds a special position from Libya's perspective.

“The visit to Turkey has been the most spectacular one so far. While everyone is trying to take their share in the new equation, Turkey will preserve its special status,” he said referring to the close ties and cooperation established during Ankara's backing of the legitimate Tripoli government against rival forces in the Libyan conflict.

After years of conflict between the United Nations-recognized Government of National Accord (GNA) and illegitimate forces loyal to Khalifa Haftar in Libya and the consequential difficult diplomatic period, an interim unity government has been established in recent months.

Selected through a U.N.-led process, Libya’s new unity government, the Government of National Unity (GNU), was sworn in on March 15. It is derived from two rival political groups that ruled the country's eastern and western regions, completing a smooth transition of power after a decade of violent chaos. Dbeibah will lead Libya to the Dec. 24 elections.

On the other hand, pro-Haftar regional actors such as Egypt, France and Greece have developed bilateral ties with the new government and have expressed their support and reestablished certain diplomatic missions in recent weeks. Also, Greece has announced that it is working on a new maritime deal with Libya.

In light of these developments, questions have now arisen about what shape Turkey-Libya ties will take in the new period and what role Turkey will play in the country and region as a whole.

Regarding the recent developments in the region, Canlı underlines the importance of recent international developments. Accordingly, the former United States administration led by Donald Trump opened a vacuum that all actors tried to fill to their own benefit.

“On the other hand, the new U.S. administration led by Joe Biden follows a more rule-based international order that will not allow global actors’ excess of power,” he said.

The new government and presidential council are mechanisms that represent and appeal to every possible group in the country and are designed to unify institutions and carry the country to elections, Öztürk said but added that there are some structural deficiencies and there is no concrete job description.

“At the first opportunity, they contacted all actors, including pro-Haftar actors, and also received support messages abroad. Because there is a legitimate government recognized by everyone anymore, regional actors do not want to be excluded from the possible privileges and all adopt a pragmatic approach. Everyone wants to take their share from the reconstruction and energy deals in the new period. Dbeibah, as a pragmatic businessman, visited many places. While he tries to build communication with all actors, he has followed a pragmatic and balanced approach, both in domestic and foreign affairs.”

The common point put forward by both analysts is that Turkey will continue to play a special role in Libya's near future.

Canlı highlighted that when Libya was going through an especially heated period of conflict, Turkey's entry was a game-changer and the country acted as a balancing element.

“When Turkey got involved, Haftar was about to capture the capital Tripoli. The advance was stopped, the diplomatic contact with Russia brought a cease-fire. Turkey and the rival side mainly led by Russia created a state of balance, which led to a deadlock and a process of waiting when the clashes stalled in the city of Sirte.”

“At that point, everyone started to wait for the result of U.S. elections. When Trump lost the elections, a new route was drawn, the U.N. took more initiative. Turkey has always expressed its support for the political solution process and acted accordingly. During the process of diplomatic talks, Turkey passivized its role and retreated. In the formation of the new administration, there was a seeking for the representation of all stakeholders and identities in the country.”

Since then, a new reality emerged as regional actors positioned themselves accordingly.

Canlı said that “we have recently seen pictures that include actors together who were impossible to come together a year ago. In recent weeks, Tripoli has become the most popular site for Western leaders to visit, while all actors built diplomatic contact.”

He underlined the similarities between the new administration and that of the GNA led by Fayez Sarraj, noting the sense of continuity.

“Therefore, this new government has a principle of pacta sunt servanda for Turkey.”

Öztürk said the GNA had Turkey to thank for its maintained presence and survival.

“Therefore, both politicians and people in Libya trust Turkey. There will be new deals, as the existing deals, spreading into new fields.”

Canlı also agreed that Turkey will play a big role in the reconstruction of Libya. A civil war spanning nearly a decade decimated the country's entire infrastructure, he said, adding that the Turkish presence in Libya will continue to work to touch the lives of civilians in addition to providing political and military assistance.

How these developments will impact the disputes over the Eastern Mediterranean in the new period, including regional alliances and the issue of natural resource sharing, is another important question.

According to Öztürk, the Eastern Mediterranean is one of the main reasons for Turkey’s active involvement in the region.

“Since it is an interim government, it is hard for them to embrace the maritime deals. The elected new government should decide on the future of these deals. Until now, Dbeibah has backed deals signed with Turkey. The cooperation will continue, with the involvement of new fields. The military presence will also likely to continue.”

In 2019, Ankara signed a maritime delimitation agreement with the GNA over the Eastern Mediterranean that provided a legal framework to prevent any fait accompli by regional states. The two countries also signed a military cooperation accord. Greece, which opposes the maritime agreement between Tripoli and Ankara, reiterated its call for the accord to be canceled last week, as it reopened its embassy in Libya after seven years.

In response to the 2019 deal, Greece and Egypt signed an agreement in 2020, designating an exclusive economic zone in the Eastern Mediterranean that overlaps with the maritime zones agreed between Turkey and Libya, a move that Turkey claims infringes on its continental shelf.

On Greece’s recent initiative to strike an alternative maritime deal with Libya, Öztürk said: “Greece made its initiative with the Presidential Council. However, the council does not have such authority. Considering Dbeibah as a figure closer to Turkey, Greece evaluates the option of (Libyan Presidential Council President Mohammad Younes) Menfi as an alternative balancing element. I do not think that there will be conflicting deals. Greece was not a strong actor involved in Libya. Libya will not sacrifice Turkey in favor of Greece.”

“On the other hand, Egypt has not opposed the Turkey-Libya deal. If Turkey can reconcile with Egypt, the tensions in the region will de-escalate in favor of Turkey.”

As Ankara and Cairo adopt a more reconciliatory tone and are scheduled to meet next month, experts have pointed out that cooperation in the Eastern Mediterranean would benefit both countries and change the balance in the region.

Canlı again touched on the Biden impact, which de-escalated tensions in the Eastern Mediterranean and reminded all actors to abstain from acting provocatively.

“But, it must be noted that there are multiple actors pursuing their own interests. Therefore, it is questionable how long this relatively calm atmosphere can be maintained.”