Do not forget Haftar's mass graves, crimes in Libya: Akar 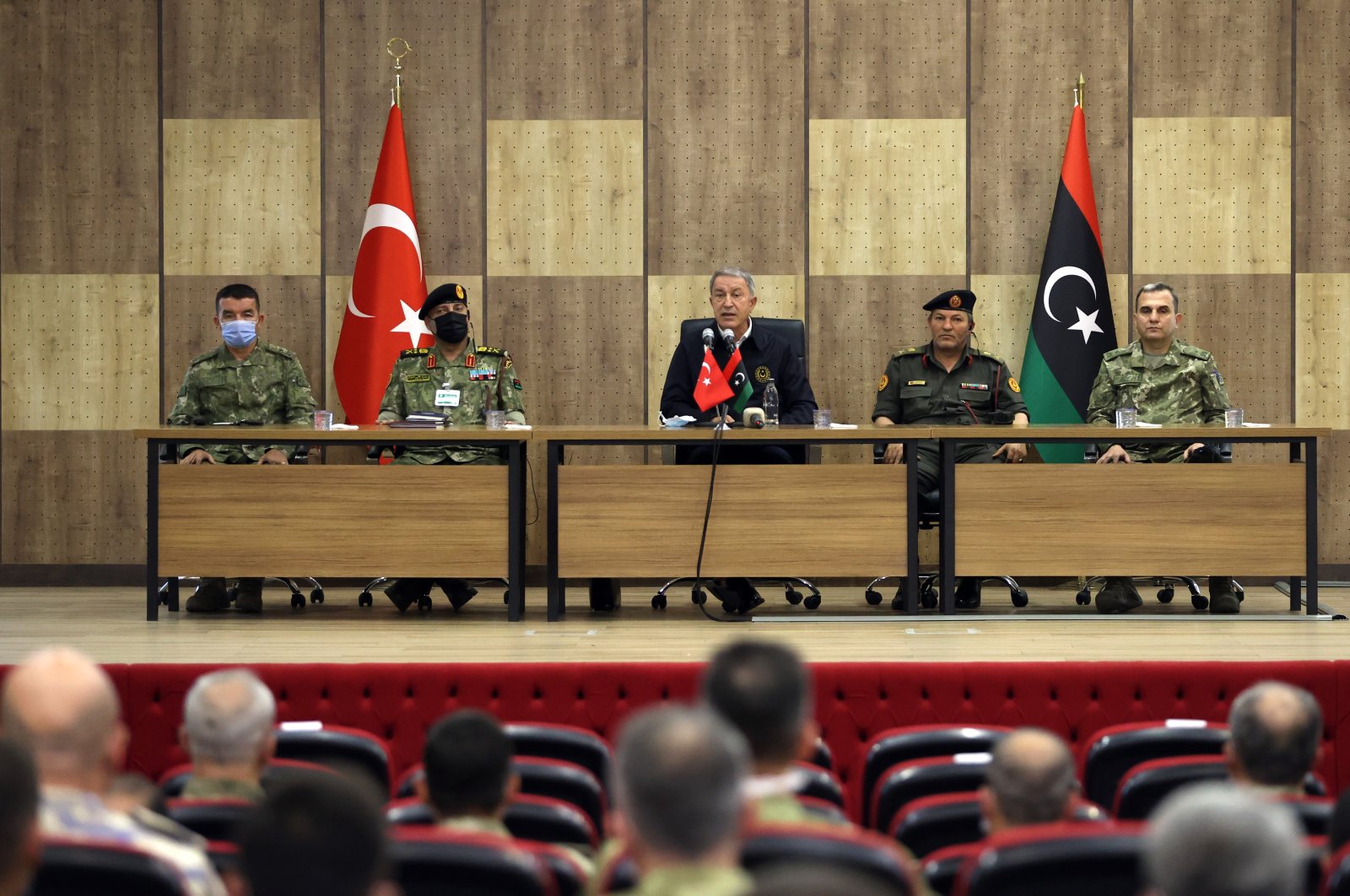 The international community must not forget the mass graves and atrocities caused by the illegitimate forces loyal to putschist Gen. Khalifa Haftar during Libya's civil war, Turkey's Defense Minister Hulusi Akar said Saturday, as he once again reiterated Ankara's support to Libyans in their rightful struggle.

As part of a high-level Turkish delegation visit to Libya, Akar visited Turkish troops and the military command in Libya's capital Tripoli. Addressing personnel there, Akar pointed to Haftar's mass graves and the hundreds of people who lost their lives due to his explosives, noting that they should not be forgotten. "We share this pain and distress with our Libyan brothers and we do our best to alleviate it."

Highlighting how putschist Haftar's attacks were on innocent people in Libya, Akar said military academy students were killed and hundreds of people were buried in mass graves.

Emphasizing that the world should not forget, Akar said: "The persecution and suffering at the hands of putschist Haftar should be remembered by everyone. The families who own the bodies found in mass graves are in great sadness and anguish. Therefore, we try to relieve their pain by meeting with them as much as we can. We will take the necessary measures with the work that we will do."

Stating that explosives laid by Haftar's forces – some even placed in toys – caused the deaths of many civilians, including children, Akar said: "We have many Libyan brothers who lost their limbs and became martyrs due to these explosives and mines. Some of them are under treatment here, some in Turkey. These events are important for Libyan society."

Since June, following the defeat of Haftar's forces in the western areas of Libya, the Libyan government found at least 300 dead bodies in mass graves in Tarhuna and south of Tripoli.

Stating that Turkey will continue to do what needs to be done for the unity, integrity and security of Libya, Akar said, "The reason we are here must be understood very well."

Underlining that they came to Libya at the invitation of the legitimate government recognized by the United Nations and within the scope of bilateral agreements, Akar continued by saying: "The activities carried out here are very clear in terms of international law, transparency and legitimacy. We have nothing to hide. We have continued our activities here with our Libyan brothers, and we continue to do so. There are still risks and threats to the current peaceful environment."

Turkey was the main backer of the U.N.-recognized Government of National Accord (GNA) against the illegitimate eastern-based Haftar forces during their offensive to capture Tripoli from the legitimate government. Turkey's military support led to a GNA victory over Haftar's forces. Since then, Libya has been going through a U.N.-led political process in a relatively stable and peaceful environment. The new unity government headed by Prime Minister Abdul Hamid Dbeibah was seated in March, who will govern the country until elections on Dec. 24.

Menfi underscored the importance of improving relations and cooperation with Ankara in a meeting with the Turkish delegation, according to a statement by his office.

A high-level delegation from Turkey visited Libya on Saturday upon the instructions of Erdoğan ahead of Monday's NATO summit.

The group met President Halid al-Mashri of the High Council of State, President Menfi, members of the Presidential Council of Libya, Minister of State for Communications and Political Affairs Ammar al-Lafi and Prime Minister Dbeibah of the Government of National Unity (GNU), Çavuşoğlu said on Twitter

"Emphasized to President Halid al-Mashri of the High Council of State our commitment to the Libyan-led and Libyan-owned political process," he said.

Çavuşoğlu said Turkey "will increase support to Libya in every field" and that the delegation "emphasized our support to national reconciliation efforts."

In a separate tweet, he said, the group emphasized Turkey's support to the GNU ahead of the Berlin II Conference at their meeting with Dbeibah.

"Will continue to cooperate for secure, stable and prosperous Libya," he said.

Çavuşoğlu also met his Libyan counterpart, Najla Mangoush, and said they will meet again at the Antalya Diplomacy Forum later this month.

Altun said Turkish and Libyan officials had significant talks for the unity, peace and tranquility of Libya.

He also had a one-on-one with al-Lafi to deepen cooperation between the two countries in media communication.