Erdoğan calls for end to Israel's oppressive policies in Palestine 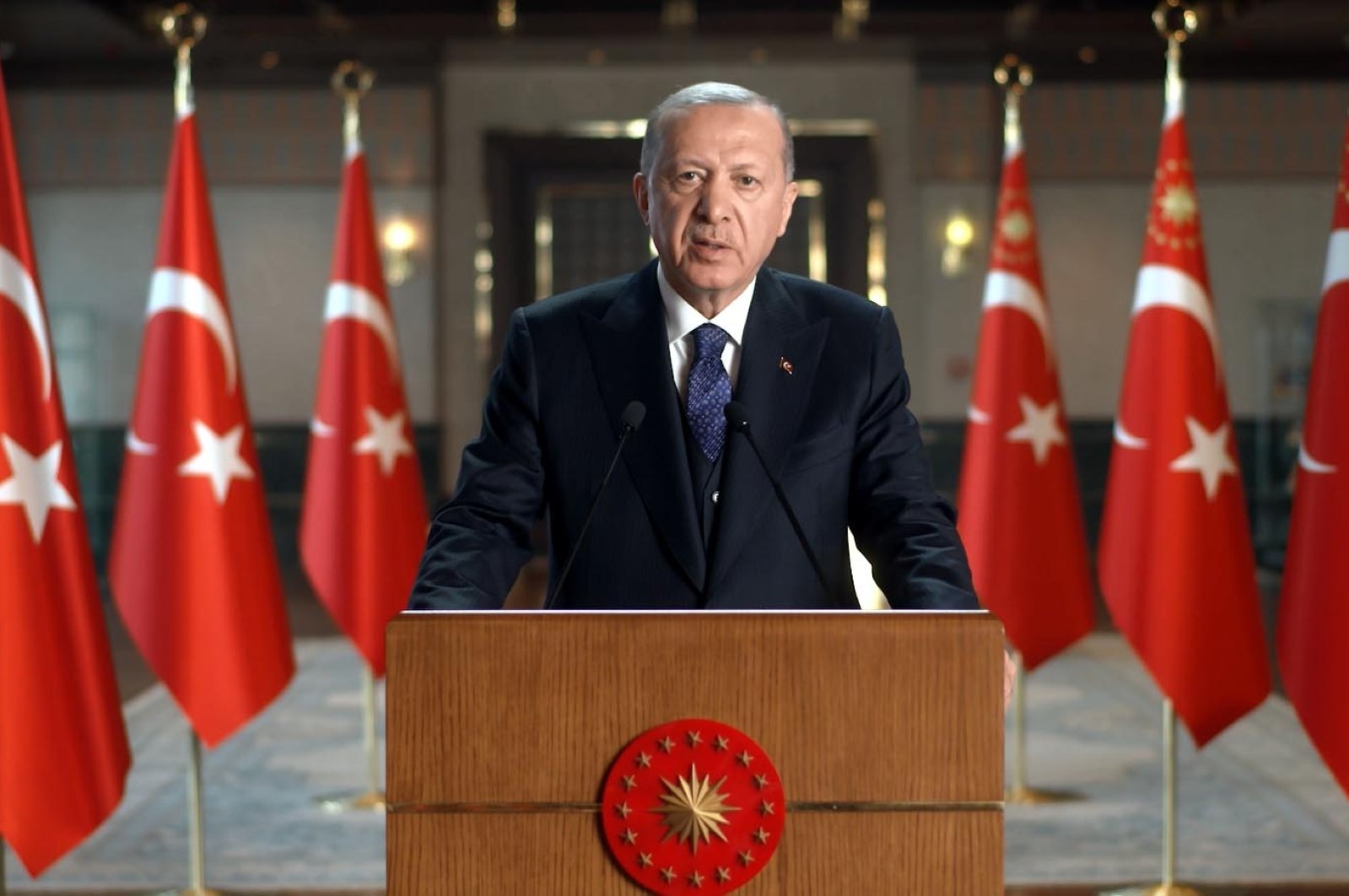 President Recep Tayyip Erdoğan speaks in a video message to the 37th Ministerial Session of the Standing Committee for Economic and Commercial Cooperation (COMCEC) of the Organization of Islamic Cooperation (OIC) in Istanbul, Turkey, Nov. 24, 2021. (DHA Photo)
by DAILY SABAH Nov 24, 2021 10:55 am
RECOMMENDED

We must put a stop to Israel's policies of illegal settlement, destruction, forced displacement, confiscation and evacuation in East Jerusalem and the West Bank, President Recep Tayyip Erdoğan said Wednesday underlining Turkey's determination to defend the Palestinian cause to the end.

Sending a video message to the 37th Ministerial Session of the Standing Committee for Economic and Commercial Cooperation (COMCEC) of the Organization of Islamic Cooperation (OIC) in Istanbul, he called on the member countries to refrain from any action that will weaken the Palestinian cause.

"We must work with all our might to preserve the status and sanctity of Jerusalem, the capital of Palestine. The main thing is the establishment of lasting peace and stability on the basis of a two-state solution and established international parameters," he added.

Erdoğan and Israel's President Isaac Herzog last week discussed bilateral ties and regional issues in a phone call. Erdoğan conveyed to his Israeli counterpart that relations between the two countries are important for the security and stability of the Middle East, and that differences of opinion can be minimized if there is mutual understanding on both bilateral and regional issues, according to a statement.

Emphasizing that it is essential to reestablish a culture of peace, tolerance and coexistence in the region, Erdoğan said that in this respect, the development of Palestinian-Israeli relations and the resumption of the peace process are priorities. He also noted that maintaining contact and dialogue between Turkey and Israel is in the common interest.

President Erdoğan also pointed out that there has been an alarming increase in anti-Islamic, xenophobic and racist rhetoric and actions in recent years.

"Muslims are exposed to racist, discriminatory, Islamophobic and xenophobic acts in many countries, especially in Europe. The so-called measures that restrict the basic human rights and freedoms of the Muslim community are worrisome. Turkey makes every effort to use international platforms more effectively, to strengthen international mechanisms and to take concrete joint steps in the fight against these problems. As an organization, we must act in unity and increase our cooperation in this field as well," he said.

Erdoğan said earlier this year that Western countries insist on not taking measures against growing anti-Islam sentiment. Erdoğan also called on Turkish institutions to take action on issues related to Muslims and Turks in these countries. Some European countries, particularly France, have embraced a hostile stance against Muslims in recent years.

Stating that the international community could not stop the atrocities in Syria, he said: "It is essential to find a permanent solution that will protect Syria's territorial integrity and ensure safe returns to the country. Our fight against terrorist organizations such as Daesh and PKK/YPG, which pose a threat to Syria's territorial integrity and national security, will continue with determination."

Erdoğan also touched upon problems Muslim societies have faced in different corners of the world.

"As members of the Organization for Islamic Cooperation, we need to strengthen our economic cooperation on the one hand, and provide the necessary political, humanitarian, financial and legal support to our brotherly countries on the other.

"Establishing lasting peace and stability in Afghanistan is our common wish. Afghanistan, which has been struggling with conflict, terrorism and occupation for 40 years. It is our duty of brotherhood towards the Afghan people to stand by the Afghan people. Continuing the humanitarian aid to Afghanistan, which is facing a serious crisis with winter conditions, should be our priority in this period," he added, expressing support for the Libyan people, Rohingya Muslims and Uyghurs in China.