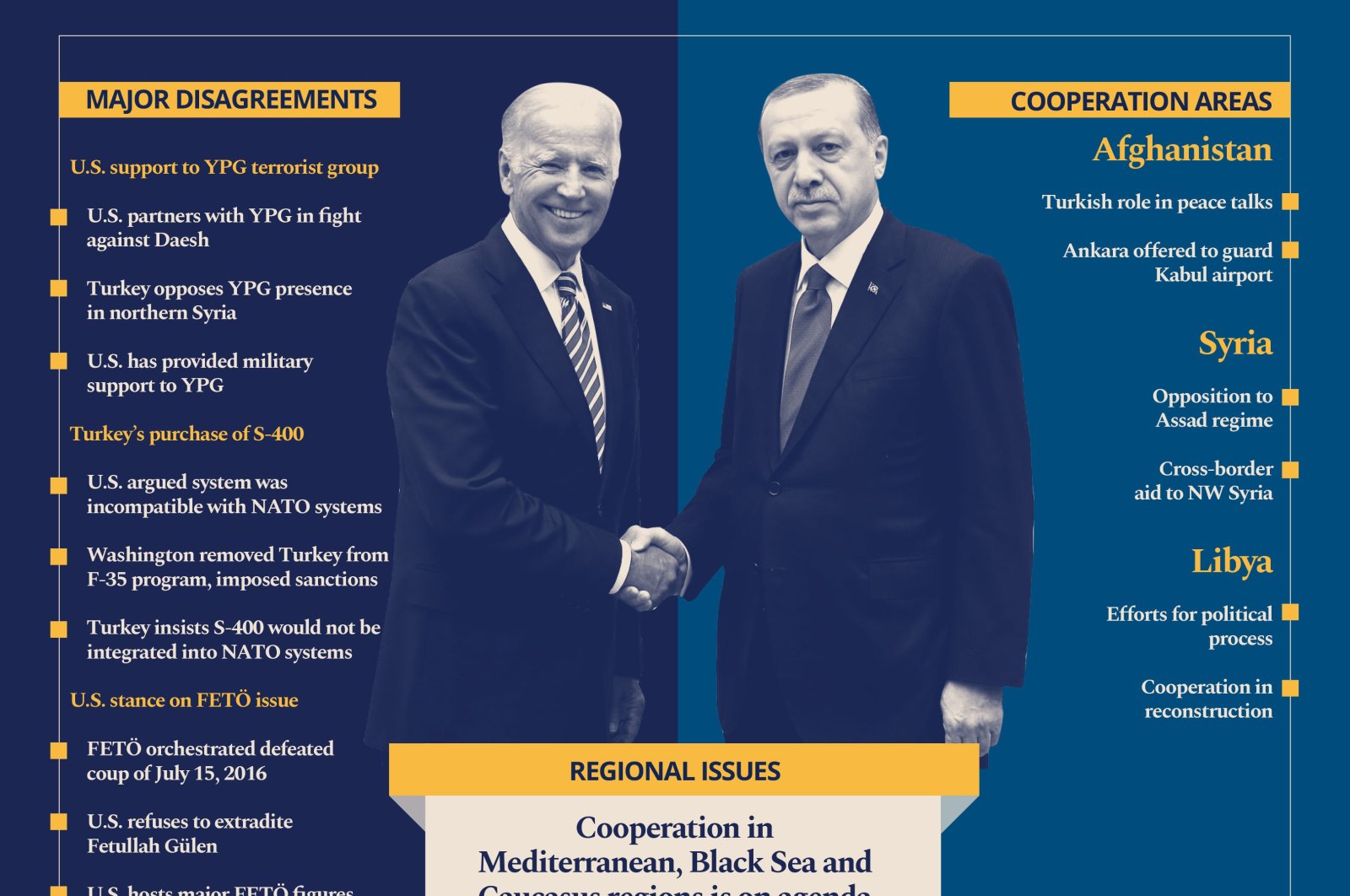 Turkish President Recep Tayyip Erdoğan on Sunday departed for Brussels to attend the NATO summit, in which the trans-Atlantic alliance's "NATO 2030" process will be evaluated.

The summit will also focus on potential threats and challenges to NATO security with an exchange of views at the strategic level. As part of ending the NATO mission in Afghanistan this year, steps for ensuring the continuation of the alliance's support to Afghanistan will also be evaluated in the summit.

According to NATO, the summit is being held to respond to the challenges "of today and tomorrow." These include terrorism, cyberattacks, disruptive technologies and the security implications of climate change. The NATO 2030 initiative to "continue adapting" the alliance is at the heart of the summit.

While Erdoğan is expected to hold bilateral meetings with other NATO leaders on the sidelines of the summit, the meeting with the United States President Joe Biden comes to the forefront, as it will be the first face-to-face interaction between the two since the latter's election as president.

Besides matters related to the NATO alliance, bilateral ties and regional issues will be discussed during the talks. According to sources, respect for Turkey's sovereignty and security sensitivities with regard to regional developments are expected to top the country's agenda at the NATO summit. It will be made clear that Turkey is a member state that fulfills its duties as part of the alliance and underlined that it offers to cooperate in the fight against terrorism and in managing humanitarian crises. Turkey's concerns and suggestions on the Afghan peace process will also be conveyed.

A positive agenda is prioritized for the upcoming meeting between Erdoğan and Biden, with potential areas of cooperation and opportunities expected to dominate talks in addition to discussions about ongoing disagreements. Biden and Erdoğan are scheduled to meet and discuss a range of issues including Syria, Afghanistan, the Eastern Mediterranean and the S-400s issue on the sidelines of the NATO summit in Brussels on Monday. The meeting comes against the backdrop of a fair amount of tension between the two countries. Although NATO allies Turkey and the U.S. have voiced interest in resetting recently strained ties, disagreements on several points remain, and sources have pointed out that political cooperation is the key to progress.

Turkey is approaching the upcoming meeting between Erdoğan and Biden with a positive agenda, Turkish Foreign Minister Mevlüt Çavuşoğlu said last week, adding that Ankara has received similar optimistic signals from Washington. Çavuşoğlu noted that the U.S. wants to cooperate with Turkey not only on the issues of Libya and Syria, but also in many areas from the Mediterranean to the Black Sea and Caucasus regions.

Biden is also looking forward to reviewing the "full breadth" of Ankara-Washington ties, as he and Erdoğan are scheduled to meet and discuss Syria, Afghanistan and other regional issues, the U.S.' national security advisor said last week, underlining that the two leaders will also look at the "significant differences" between the two NATO allies.

The issue of Afghanistan will be one of the main topics of the NATO summit. Under the February 2020 deal secured with the Taliban under former President Donald Trump, all U.S. forces were to be out of Afghanistan by May 1.

But Biden said in April that the pullout would be completed by the 20th anniversary of Sept. 11, 2001, the al-Qaida attacks on the U.S. that prompted the U.S.-led invasion and ouster of the Taliban government that sheltered the group.

With violence raging, many U.S. lawmakers and current and former officials fear that the departure of the foreign forces and stalled peace talks are pushing Afghanistan into an all-out civil war that could return the Taliban to power.

The Pentagon says the U.S. withdrawal is more than 50% complete. Turkey, with more than 500 soldiers still in Afghanistan training security forces, now has the largest foreign military contingent there.

Following statements from Ankara, the Pentagon said that Turkey and the U.S. held preliminary talks on the security of Kabul’s Hamid Karzai International Airport after the withdrawal of American and other NATO forces from Afghanistan.

At the request of the U.S., Turkey also pledged to host a high-level international peace conference on Afghanistan in April, but the Taliban declined to attend, forcing Ankara to postpone it. Ankara also recently pointed to continuing efforts for the Afghanistan peace process in coordination with Washington.