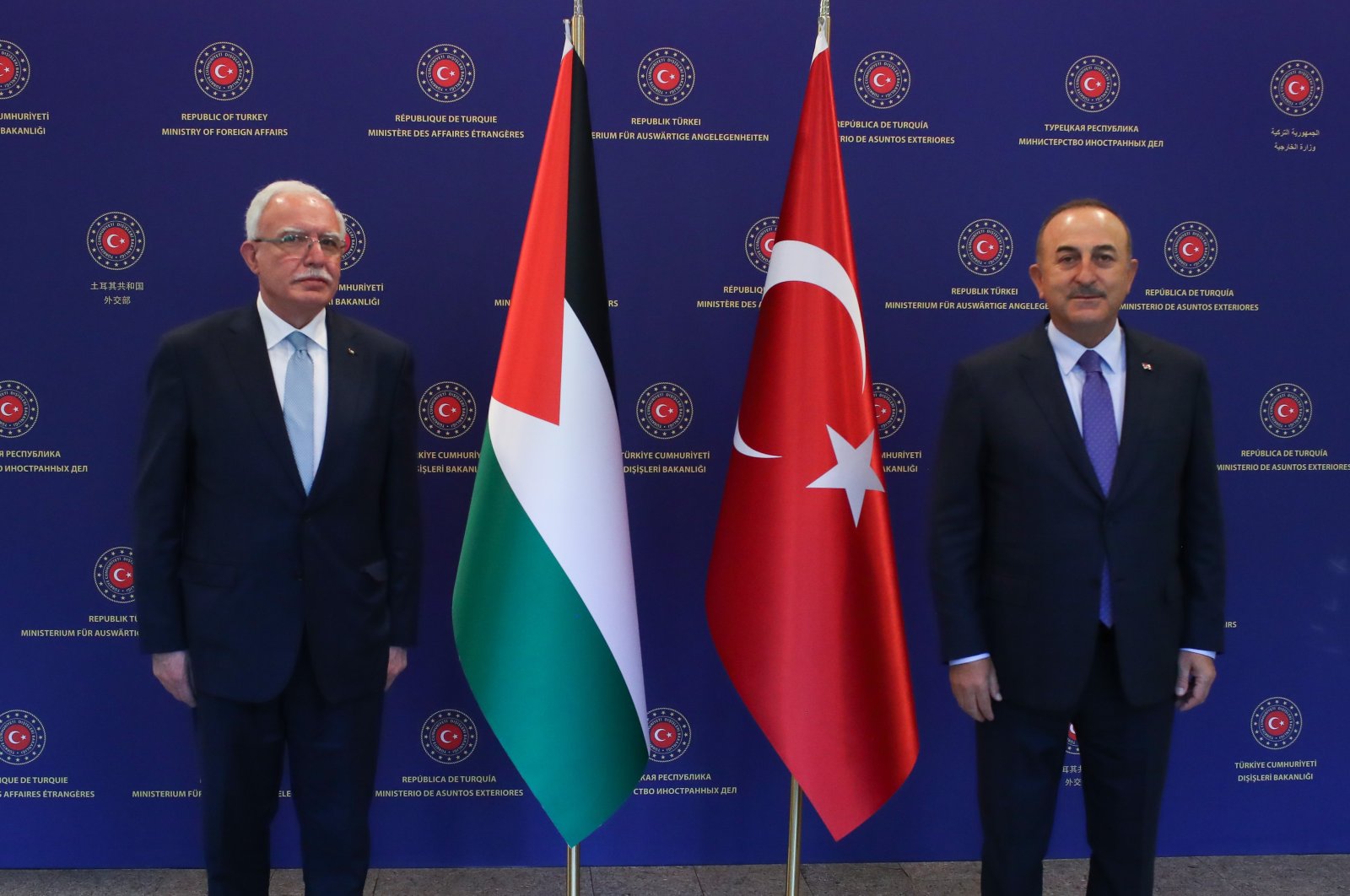 Foreign Minister Mevlüt Çavuşoğlu urged Israel to stop expanding illegal settlements in East Jerusalem, as he reiterated Turkey's support for Palestine in a joint news conference with his Palestinian counterpart Riyad al-Maliki in the capital Ankara.

Later on, Çavuşoğlu condemned Israeli police for raiding the Al-Aqsa Mosque in Jerusalem and attack Muslim worshippers with stun grenades.

“We’re following Israel’s policies of occupation and violence against the Palestinians with concern,” Altun said, adding that such attacks are unacceptable.

He urged Israeli forces to immediately leave the area and immediately halt the “vile and reckless attacks.”

The Turkish foreign minister also said Turkey is ready to provide all assistance to ensure that the elections in Palestine take place in line with international standards.

"Election processes are an important dimension. We are ready to provide whatever is necessary for Palestine to ensure that the elections take place in line with international standards and we have said this before," Çavuşoğlu said.

Meanwhile, the Palestinian Foreign Minister hailed Turkey's support for Palestine, saying that they are thankful for it.

"Turkey comes first out of countries that support the Palestinian people," al-Maliki said.

'Better ties with Egypt to enhance Turkey's support for Palestine'

Regarding the recent visit of the Turkish delegation led by the Deputy Foreign Minister Faruk Kaymakcı to Egypt, Çavuşoğlu said the meetings took place in a positive atmosphere.

He noted that the two sides will evaluate the steps to be taken and he may hold talks with his Egyptian counterpart.

"We have always emphasized the importance of Egypt for Palestine even during times when our ties with Cairo remained at the lowest level. The normalization of relations with Egypt means that our support for Palestine will be coordinated in a better manner," Çavuşoğlu said.

Earlier this year, Turkey said it had resumed diplomatic contact with Egypt and wanted to improve cooperation after years of tensions that began with the disruption of relations in 2013. On April 15, Çavuşoğlu announced in a live broadcast that the two countries had agreed that the channel first opened between Turkish and Egyptian intelligence would continue through the foreign ministries. Çavuşoğlu said Egypt had invited the Turkish side for a visit in early May, which is to be held at the deputy foreign minister-level. After an interdelegation meeting, Çavuşoğlu expressed his willingness to meet with his Egyptian counterpart as well. The top diplomat also recently announced that the countries have discussed appointing envoys.

Relations between Turkey and Egypt deteriorated after Gen. Abdel-Fattah el-Sissi toppled the country’s first democratically elected president, Mohammed Morsi, in a coup after only a year in office. Ankara has maintained its position that a democratically elected president cannot be deposed by a military coup, voicing its criticism of el-Sissi and his backers, including the West and some of Ankara’s rivals in the Gulf region. The Egyptian government, on the other hand, urged Turkey not to intervene in an issue that it considers being the country's internal affairs. The dispute led to a deadlock in bilateral relations for many years.