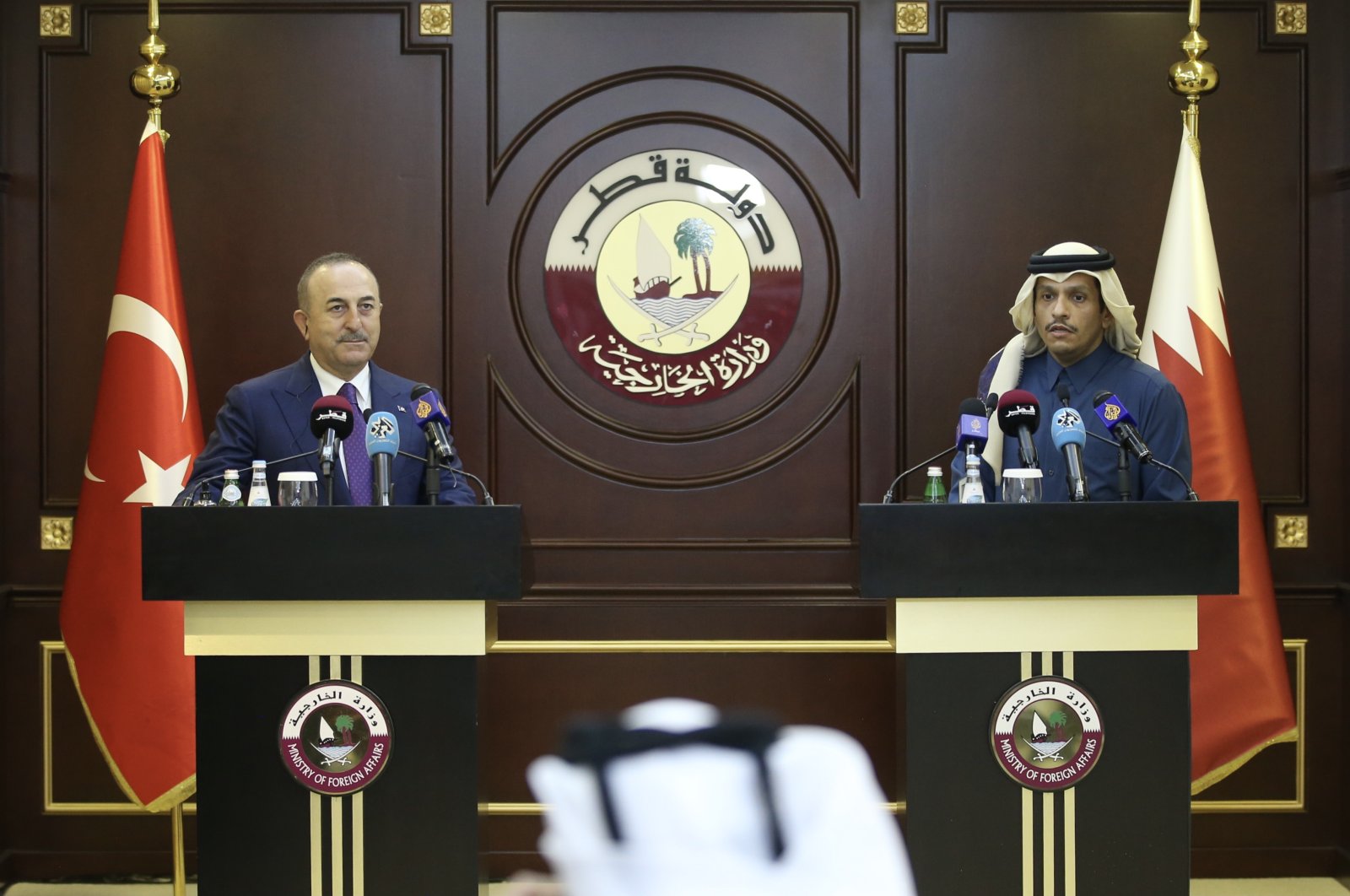 Turkey and Qatar work hand in hand to find peaceful solutions to regional problems, Foreign Minister Mevlüt Çavuşoğlu said Thursday, underlining that the bilateral ties between the two countries are strengthening by the day.

Speaking at a news conference with his Qatari counterpart Sheikh Mohammed bin Abdulrahman Al Thani in Doha, Çavuşoğlu said the countries would continue to cooperate not just in trade but in all possible fields.

Çavuşoğlu underlined that Turkey welcomes the normalizing of ties between Qatar and other Gulf counties, commending Kuwait's efforts during the process.

"This is an important start. But we hope that the ties between the brotherly countries will return to normal completely. Still, the lifting of the embargoes is a crucial beginning point," he said.

In June 2017, a Saudi-led coalition issued 13 sweeping demands, including the closure of the Al Jazeera news network and the shuttering of a Turkish military base, in exchange for ending its blockade of Qatar. They also demanded Doha curb relations with Riyadh's archrival, Tehran, in a situation that came to be known as the Gulf crisis. Qatar rejected the demands, calling them "unrealistic" and "not actionable," leading to a stalemate. The rift seems to have eased, with the countries now reengaging in dialogue.

Emphasizing the fact that Turkey views the stability and security of the Gulf region as a reflection of its own stability and wealth, the foreign minister highlighted that Turkey is prepared to boost diplomatic cooperation with the regional countries through the establishment of more bilateral diplomatic mechanisms.

He went on to say that Turkey and Qatar's partnership could be helpful in restoring peace to the region and that the two are willing to mediate conflicts, including the issue of the U.S. sanctions on Iran over its nuclear activities.

Çavuşoğlu also called for the war in Yemen to come to an immediate end, underlining the urgent need for peace in the region. He added that Turkey would continue to support U.N. initiatives in this respect.

Yemen’s war began in September 2014, when the Houthis seized the capital Sanaa and began a march south to try to seize the entire country. Saudi Arabia, along with the United Arab Emirates (UAE) and other countries, entered the war alongside Yemen’s internationally recognized government in March 2015.

The war has killed some 130,000 people, including over 13,000 civilians slain in targeted attacks, according to the Armed Conflict Location & Event Project (ACLED).

The foreign minister's visit to Doha came on the third day of his three-day Gulf tour. His prior stops were Oman and Kuwait.

"Turkey is the strategic partner of the (Gulf Cooperation Council) GCC and we welcome the normalizations between the GCC countries and some other countries in the region. Turkey supports the unity, prosperity and security of the Gulf region," Çavuşoğlu said in Oman on Wednesday.

"We are ready to work closely with Oman and all other Gulf countries on issues regarding our region," he said.

Çavuşoğlu also met with Kuwaiti Prime Minister Sheikh Sabah Al Khalid Al Sabah in what he called “a fruitful meeting,” where he voiced that Ankara wants to work closely with the Cabinet that will be formed in the upcoming period.

Turkey and Kuwait, which gained independence in 1961, celebrated the 50th anniversary of the establishment of their diplomatic relations in 2014. Ankara enjoys multifaceted relations with Kuwait City based on common cultural and historical ties.