Turkey reminds envoys not to interfere in internal affairs: Erdoğan 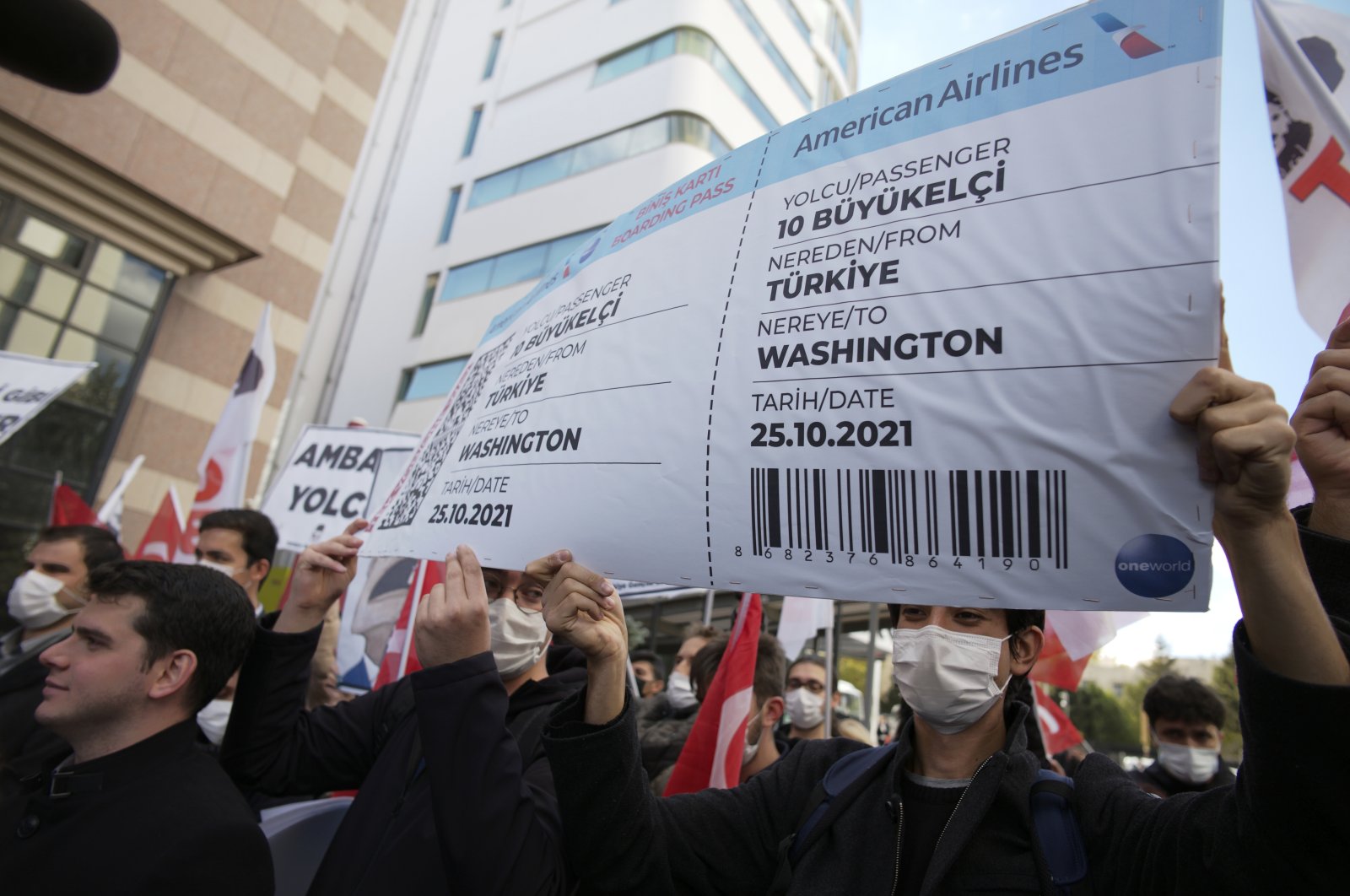 Turkey's recent stance against 10 ambassadors' joint statement for the release of jailed businessperson Osman Kavala is not a show of strength but only asserts that ambassadors working in Turkey cannot interfere in the country's internal affairs, President Recep Tayyip Erdoğan said Wednesday.

Speaking to the accompanying Turkish press members on his way back from Azerbaijan to Turkey, he said that any ambassador working in this country must know the consequences of their actions.

"For those who don't know, we have reminded them of Article 41 of the Vienna Convention," he added.

Also referring to some foreign media coverage that Turkey stepped back from its threat against ambassadors, Erdoğan said: "How did I take a step back? I am on the offensive. There is no stepping back in my book."

Turkey and President Erdoğan have taken a very important stance against the attempt to intervene in the country's law and judiciary, Justice Minister Abdulhamit Gül said Wednesday, referring to the recent crisis between Ankara and 10 Western countries over foreign ambassadors' joint statement on the Osman Kavala case.

Speaking at a televised interview, regarding the embassies' step back on the issue, he said, "I also think and believe that there will be no attacks on Turkey's sovereignty from now on."

Gül underlined that the ambassadors' statements are contrary to Article 138 of the Constitution and that, according to the Vienna Convention, every diplomat is accepted with a commitment not to interfere in the internal affairs of the country they are in and to recognize their sovereignty.

"Turkey is a sovereign power. Turkey is not someone's whipping boy. Turkey is not a country where someone sits in a training room to be disciplined and is given instructions. Our honorable president has also revealed and demonstrated this in a statement. This issue is a national issue. Of course, it would be appropriate to have a strong common voice against the unacceptable attitudes towards Turkey, towards the existence of a sovereign state, and towards the Turkish judiciary, with a common stance on this issue with its government and its opposition," he said.

Last week, the embassies of the United States, Canada, France, Finland, Denmark, Germany, the Netherlands, New Zealand, Norway and Sweden called for Kavala’s release in a joint statement, claiming the ongoing case has cast a shadow over democracy and the rule of law in Turkey.

Turkey’s Foreign Ministry summoned the ambassadors of these countries, accusing them of meddling in the Turkish judiciary.

Erdoğan said he ordered the Foreign Ministry to designate the ambassadors persona non grata in response, prompting several embassies and the U.S. to issue another statement on Monday in which they said they maintain “compliance with Article 41 of the Vienna Convention on Diplomatic Relations.”

The ambassadors took a step back from slander against the Turkish judiciary and Turkey with the new statement, said Erdoğan late Monday after a Cabinet meeting.

“We believe that these ambassadors, who expressed their commitment to Article 41 of the Vienna Convention, that is, the commitment to abide by the laws and regulations of countries and not interfering in internal affairs, will now be more careful in their statements on Turkey’s sovereign rights,” said Erdoğan.

He said anyone who does not respect the independence of Turkey and its sensitivities cannot stay in Turkey “regardless of their positions.”

Kavala faced charges over the 2013 Gezi Park protests, a small number of demonstrations in Istanbul that later transformed into nationwide protests that left eight protesters and a police officer dead. He was acquitted of all charges in February 2020. An appeals court, however, overturned the verdict in January.

Kavala is also accused of involvement in the 2016 defeated coup orchestrated by the Gülenist Terror Group (FETÖ) in Turkey. Those charges were combined with the Gezi case in February. He was remanded into custody on charges of spying in March.

A court recently ruled that he will remain in prison until a hearing scheduled for Nov. 26 takes place to determine whether he will be released or not.