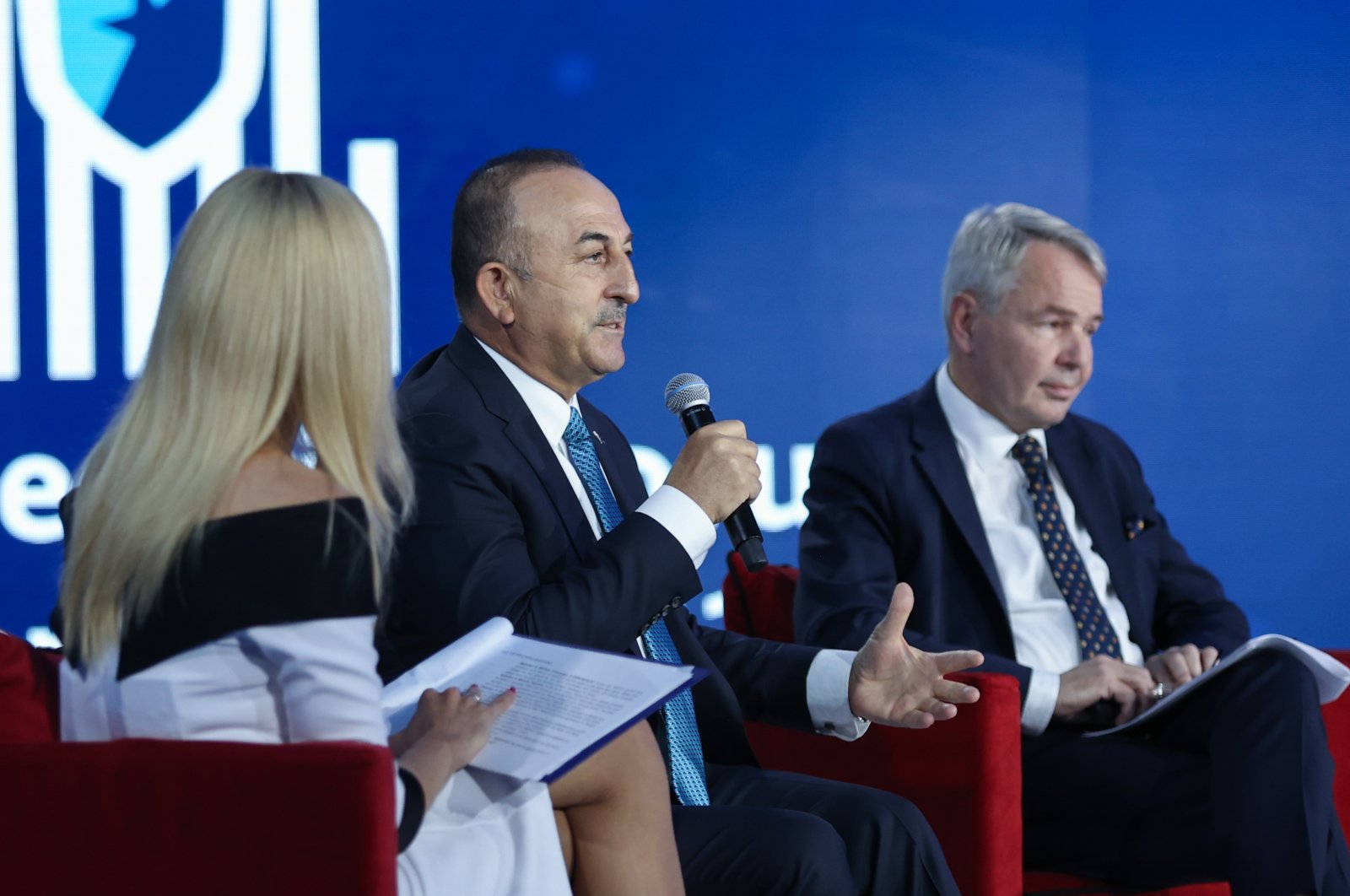 Foreign Minister Mevlüt Çavuşoğlu Tuesday underlined the importance of cooperation between Turkey and Eastern and Central European countries during a security forum in Poland's capital Warsaw.

"What we are discussing at NATO, particularly when we are talking about the (next) 10 years, (are) the future of NATO, the adaptation of NATO to new challenges and the threats," Çavuşoğlu told the 7th Warsaw Security Forum.

"And that presents us many opportunities (for) cooperation, particularly between Turkey and Eastern and Central European countries, including the Baltic regions," he added.

Çavuşoğlu was speaking along with his counterparts from Finland (Pekka Olavi Haavisto), Ukraine (Dmytro Kuleba) and Poland (Zbigniew Rau) at a panel discussion titled "From the Baltic to the Black Sea: Unlocking the Strategic Potential of the Region."

"I think Poland also sees it like that. That is why Poland sent airplanes to the Incirlik base in Turkey recently to support NATO's efforts to that end, and vice versa, we actually sent F-16s to Poland to support NATO's air policing," the minister said.

"And we have also officers in Poland, and at NATO missions in Poland and Baltic States," he added. "But indivisibility of the security of (the Euro-Atlantic region) is the main principle of NATO right now.

"Therefore, the Baltics, the eastern flanks and southern flank of NATO, the Indian, Baltic, the Black Sea and the Mediterranean, and this is how Turkey sees it," he stated. "In addition to our cooperation within NATO or other organizations, Turkey has been engaging with regional countries, Eastern and European countries," he added.

The challenges being discussed lately mostly are COVID-19 and predictions about the post-COVID-19 era, Çavuşoğlu explained and added: "But we are facing other challenges ... in our region and beyond. Hybrid, and also other kinds of threats like cyber threats, along with the conventional threat that we have been facing such as terrorism, and many other challenges."

He also underscored the "very important" trilateral mechanism between Turkey, Poland and Romania and said, "We decided to upgrade this mechanism to the leaders' level, and in Turkey next year, we will bring the leaders together."

During his visit to Poland, Çavuşoğlu underlined that the improving and deepening partnership between Turkey and Poland will be the guarantor of peace and welfare in the region.

When asked about ongoing tensions between Russia and NATO, Çavuşoğlu said the Black Sea was key to Euro-Atlantic security.

"That is exactly what we're doing as NATO allies, and the Black Sea countries, as well," he said, adding that this was the "main reason" for establishing the trilateral cooperation mechanism with Poland and Romania.

"So, we need to show our solidarity. Of course, at the same time, we have to be realistic. And we have this dual-track approach at NATO toward Russia," he explained.

Noting that while some members of NATO argued for more engagement and some preferred deterrence, Çavuşoğlu said, "So, this is also important because the coherence and unity of NATO is as important as our defense capability."

"And, we have been very candid and open with Russia. And we are engaging with them, and President (Recep Tayyip) Erdoğan was also very open and candid during his meeting with President (Vladimir) Putin in Sochi," he said, referring to a recent meeting between the two leaders last week.

Çavuşoğlu reiterated that Ankara also would not recognize Moscow's illegal annexation of Crimea.

"We need to continue supporting the Black Sea countries Ukraine and Georgia," he said. "We need to support them to actually strengthen their capabilities at the same time, and also to have better relations with NATO."

He also said Poland and Turkey were among the "unfortunately few NATO allies that are raising this issue at every single ministerial and every single summit."

Cooperation rather than competition

When asked whether China is perceived as a threat or an opportunity, Çavuşoğlu said, "As a principal, Turkey is for more cooperation and dialogue rather than competition."

Noting that the region has been concerned with the rivalry between the United States and China, Çavuşoğlu said there had been tensions in the region, as well. "And this competition even affected the alliance, as well, recently," he said, referring to a spat stemming from a trilateral defense pact between the U.S., the United Kingdom and Australia that angered France.

"How much are we supporting Balkan countries and North African countries?" he asked. "We are doing nothing, we are competing between ourselves. And meanwhile, who can fill this kind of vacuum? Of course, superpowers (can). So this is my point and China is trying to be more active in global politics," he explained.

"It is a challenge sometimes. It is an opportunity for many countries, but particularly for developing and least-developed countries," he added.

The minister also expressed concern over the human rights situation in the Xinjiang region and the rights of the Uyghur Turks there.