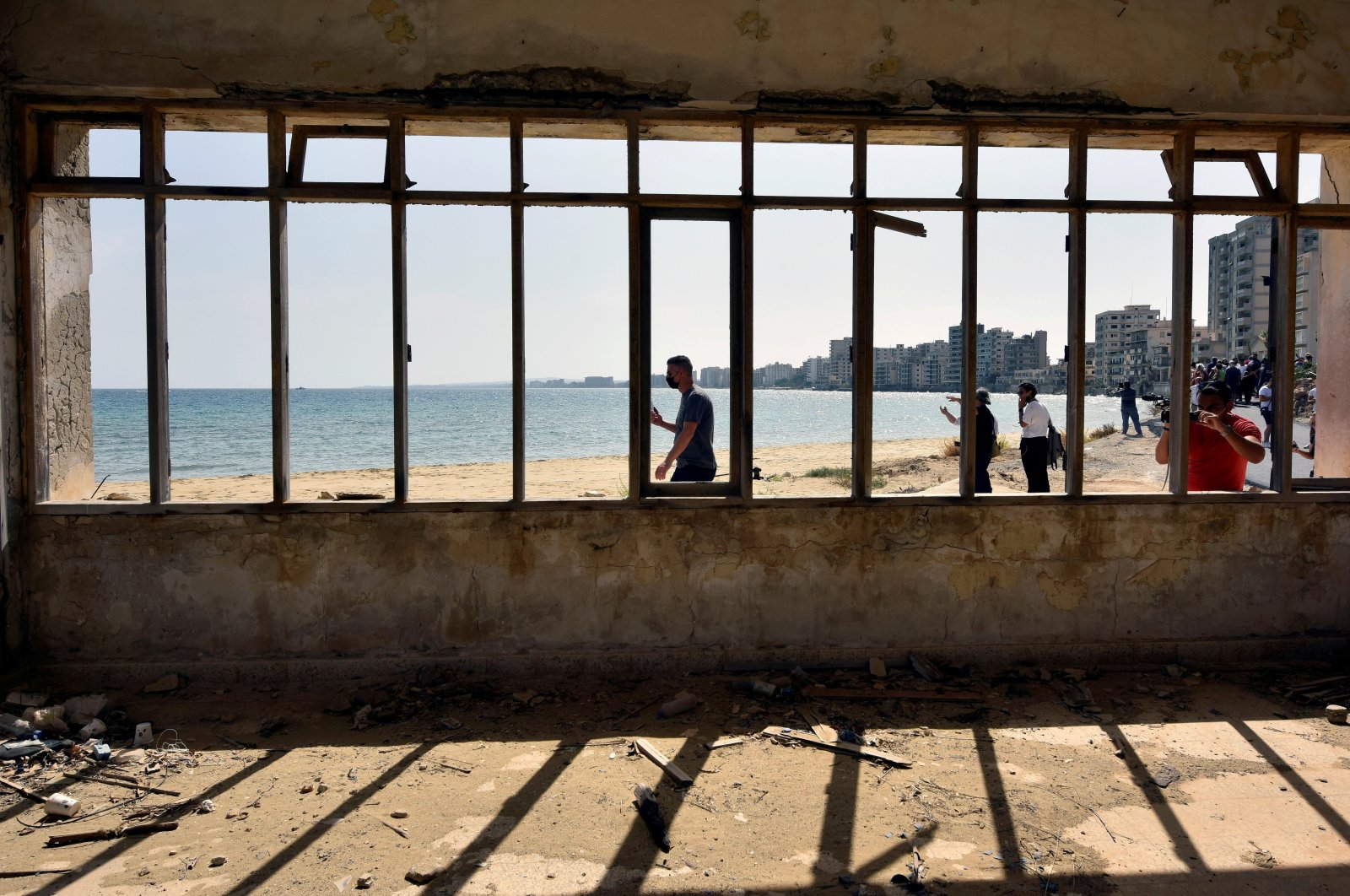 People walk on a beach inside an area fenced off by the Turkish military since 1974 in the abandoned coastal area of Varosha, a suburb of the town of Famagusta in the Turkish Republic of Northern Cyprus (TRNC), Oct. 8, 2020. (Reuters)
by DAILY SABAH WITH AA Jul 28, 2021 10:29 am
RECOMMENDED

The biased position of the European Union on the Cyprus issue makes it impossible to contribute to the solution, Turkey said on Tuesday as it dismissed remarks made by the bloc's foreign policy chief Josep Borrell on the partial reopening of the Varosha (Maraş) region in the Turkish Republic of Northern Cyprus (TRNC) as being worthless.

"These and similar statements, which ignore the Turkish Cypriot people, are disconnected from the facts and reflect only the views of the Greek Cypriot side, have no value or provision from our point of view," said Foreign Ministry spokesperson Tanju Bilgiç.

"It is also impossible for this biased EU position, put forward under the pretext of membership solidarity and veto concern, to contribute to the solution of any problem," he stated.

"Our support for the proposals of the TRNC authorities and all the decisions they have taken on the solution of the Cyprus issue and the opening of Maraş are complete," the statement said.

In 2004 referendums on both sides of the island, Greek Cypriots rejected the United Nations plan to resolve the island's issues while the Turkish Cypriots accepted it. Turkey says the EU broke promises it made before the vote, including lifting the blockade from Turkish Cyprus.

Borrell said earlier on Twitter that the "EU strongly condemns Turkey's unilateral steps and unacceptable announcements on the further reopening of the fenced-off town of Varosha. We call for the immediate reversal of these actions and of all steps taken on Varosha since October 2020."

Varosha was partially reopened to the public last October after being a "ghost town" since 1974.

Since its partial reopening, Varosha has attracted both people living in the TRNC as well as foreign tourists, with the environment and landscape around the town also boosting its appeal.

The locals of Gazimağusa (Famagusta) also believe that the gradual reopening of Varosha after being abandoned as a ghost town for 46 years will bring positive results to the region and the island of Cyprus.

The move comes on the heels of last week's ceremonies marking the 47th anniversary of Turkey's Peace Operation.

Cyprus has been mired in a decades-long dispute between Greek and Turkish Cypriots, despite a series of diplomatic efforts by the U.N. to achieve a comprehensive settlement.

The Turkish Foreign Ministry recently said decades of efforts failed to lead to a bizonal, bicommunal federal settlement "due to the intransigent attitude of the Greek Cypriot administration." They added that insisting on this model "now damages the credibility of the Council."

"A new negotiation process toward a just, lasting and sustainable settlement to the Cyprus issue could begin only by securing the equal sovereignty and equal international status of the Turkish Cypriot people," the ministry said.