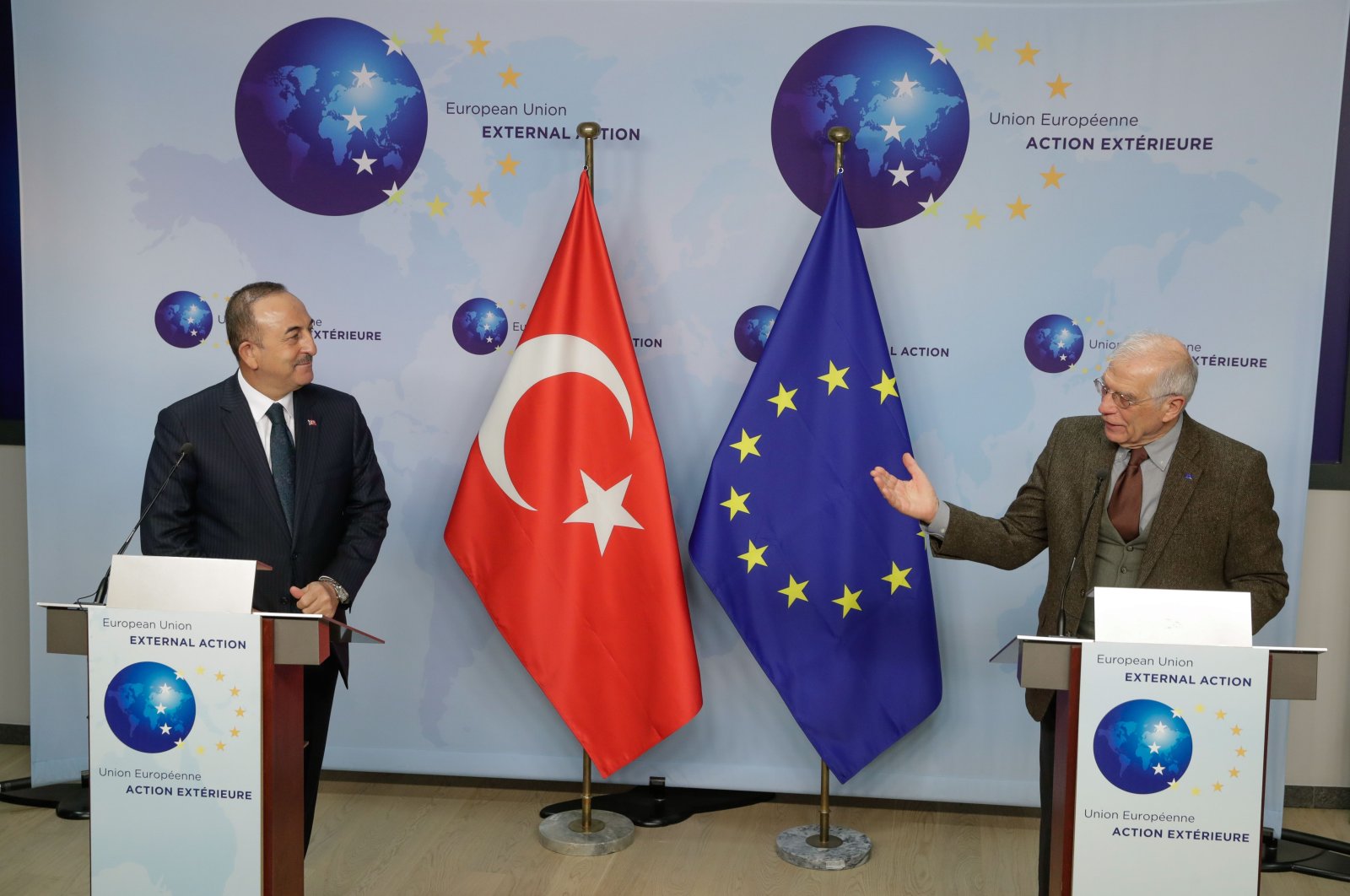 Foreign Minister Mevlüt Çavuşoğlu (L) and High Representative of the European Union for Foreign Affairs and Security Policy Josep Borrell give a joint statement ahead of a meeting at the EEAS in Brussels, Jan. 21, 2021. (AFP Photo)
by DAILY SABAH Jan 21, 2021 2:14 pm
RECOMMENDED

Concrete steps must be taken to maintain the positive trajectory of relations between Turkey and the European Union, Foreign Minister Mevlüt Çavuşoğlu said Thursday.

Speaking at a joint press conference with the bloc’s foreign policy chief Josep Borrell in Brussels before a scheduled meeting, Çavuşoğlu said: "It is important to establish a positive atmosphere in the Turkey-EU ties and concrete steps are needed to make it sustainable."

Adding that 2020 was a problematic year for Turkey-EU relations due to a joint declaration after the December summit, Çavuşoğlu said: "But since then both sides have expressed will, in order to create a positive atmosphere for the developments of ties between the two sides."

For his part, Borrell said that Turkey and the EU started the year on a positive note and that the bloc welcomes the resumption of talks with Greece over hydrocarbon rights in the Eastern Mediterranean but added that the EU has human rights concerns.

"We have seen an improvement in the overall atmosphere ... we strongly wish to see a sustainable de-escalation in the Eastern Mediterranean," he told reporters.

Çavuşoğlu arrived in Brussels Wednesday to hold a series of high-level diplomatic meetings in the EU’s capital, hoping to normalize ties between Turkey, a candidate for full EU membership, and the bloc and further cooperation in several fields.

Çavuşoğlu is in Brussels to present Ankara's views and expectations on several bilateral issues, in addition to global and regional topics, during meetings with officials from the EU, NATO and Belgium.

In order to solve the dispute in favor of all countries, Turkey last year proposed to hold a conference with the participation of each Mediterranean nation, including the Turkish Cypriots, yet no concrete answer has been given by the EU to the proposal.

Çavuşoğlu will meet with NATO Secretary-General Jens Stoltenberg on Friday at the alliance's headquarters in Brussels, and the two are expected to exchange views on the issue.

The EU-Turkey Customs Union is a trade agreement that came into effect on Dec. 31, 1995, following the March 6, 1995, Decision of the European Community-Turkey Association Council to implement an association between the two parties in which goods may travel between the two entities without any customs restrictions. The customs union does not cover essential economic areas such as agriculture, services or public procurement.