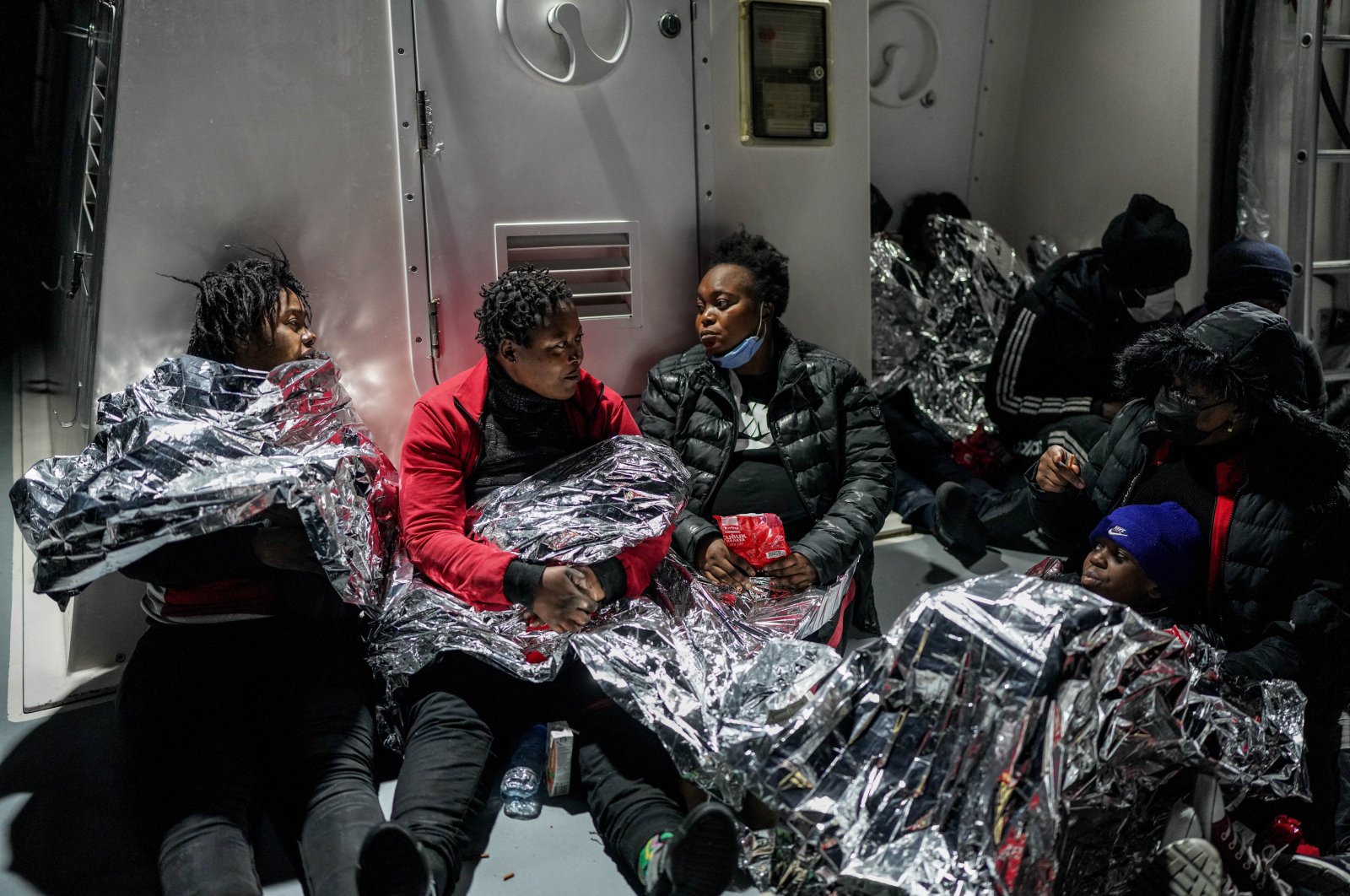 The journey of hope of irregular migrants, who set out to start a new life, either ends in the blue waters of the Aegean or turns into a nightmare due to the inhumane practices of Greek coast guard units. Pushbacks, inhumane practices and violence against migrants that Greece has committed in the name of the "fight against irregular migration" in recent years, have been documented once again.

While Turkish coast guard teams continue their fight against those who want to go abroad illegally, on the other hand, they come to the rescue of irregular migrants left at sea in a desperate situation.

During the January-October period of this year, 16,023 irregular migrants were rescued in 584 separate incidents in the area of ​​responsibility of the Coast Guard Aegean Regional Command. A total of 11,788 irregular migrants were disembarked in 416 pushbacks, including women and children, whose engines were dismantled by Greek elements, left to die in rubber boats or in life jackets at sea.

We joined the northwestern Aydın province's Kuşadası district's Coast Guard Command teams to watch their work in progress. After the Greek Ministry of Maritime Affairs informed Ankara via fax that four boats were waiting to be rescued, they mobilize and head to the specified coordinate.

Off the Dilek Peninsula, 82 refugees including 32 children, four babies and a refugee who is eight months pregnant, are waiting helplessly in the middle of the sea in four rubber boats, known as life rafts.

Once the migrants left at the mercy of the Aegean see the rescue boat approaching, they shout together: "Help us, there are children and women. We are from Lebanon." Refugees on the life raft, first of all, children and women, are taken to the coast guard boats one by one. What they say gives us goose bumps. Refugees, who were beaten and had their money stolen by the Greek forces, say that they were left to die in the middle of the Aegean after their boats were confiscated.

Describing his experiences in tears, Amani Ismail stated that he set off from Lebanon with his three children and wife.

"We bought a boat in Lebanon by paying $3,000 per person. The smugglers taught some of us how to drive a boat. Our goal was to go first to Italy and then to Germany. We were caught in a storm on our way to the island of Crete, passing by the island of Cyprus. Our ship also crashed. Greek coast guard teams spotted us. The moment we thought we were saved, we experienced a disaster. They attacked us, they beat us all. They took our money, our mobile phones, all our valuables. They even threw my babies' food into the sea. We were so helpless that we had nothing to do but pray to God. We were tortured. They took our boat, stuck us in inflatable boats and left us in the middle of the sea. We didn't even know where we were. Then you came and saved us."

Isam Abduli also showed his eyes, which were starting to bruise, and said that the Greeks tortured them. Abduli said: "The Greeks said they would take us to Italy and help us. We were so happy. When we got on the ship, they attacked us. They beat us. They mostly beat the men. A Greek soldier punched me in the eye. They took all our valuables. Cell phones, all of our money. Our stuff is gone. Then they left us on these inflatable boats."

After taking the 82-person crew of the rubber boat on board, the coast guard first took a temperature measurement. They then distributed water, juice and cakes to everyone. A sick refugee whose body temperature had dropped was treated. They tried to balance the body temperature of the migrants with thermal blankets. Those who needed medical help were taken to hospitals. Irregular migrants were then handed over to the Provincial Directorate of Migration Management.

At the end of the second day, crews acted upon a fax notice sent by the Greek authorities to Ankara. It was again reported that there were refugees on a life raft at the given coordinates. The Greeks report the refugees they push into Turkish territorial waters to Ankara as if nothing had happened. At the given coordinates, a life raft with 24 African refugees, one of them a baby, were waiting in the middle of the darkness off the coast of Gümüldür. Refugees, many of whom were freezing from the cold, increase their cries for help when they saw the coast guard boat. Thermal blankets, cake and juice are distributed to everyone.

Romario Tambe said: "We wanted to go to Europe with a group of our friends from Cameroon, Congo and Angola to realize our dreams. We worked for years and saved money for this. We jumped on a boat and crossed. We were in the territorial waters of Greece, we were about to arrive at Samos Island. We were caught by Greek teams.

"They beat us, they took our money, our cell phones, everything. They harassed the women during the body search. Then they brought us to the Turkish side and left us in the middle of the sea. They even took our drinking water from us. We were about to freeze from the cold. Twenty-four people waited helplessly on a small boat."

Most recently, a European Parliament group called on the European Commission to take action against illegal pushbacks of migrants and refugees on the bloc's external borders.

Addressing European Commission President Ursula von der Leyen, the Socialists and Democrats (S&D), the second-largest group of EU lawmakers, urged her "to take all the necessary actions to put a stop to the inhumane policy of pushbacks that taints us all as Europeans."

"In Greece alone, the UNHCR has documented around 300 incidents of illegal expulsions around the Aegean islands and Greece's north-eastern Evros land border with Turkey between January 2020 and March 2021," the S&D wrote, also mentioning violent pushbacks by Croatian authorities and at the bloc's borders with Belarus.

"It is also alarming that the latest investigations suggest that parts of the material used to carry out pushbacks are seemingly paid for with EU money," they added, referring to a joint investigation of leading media outlets revealing systematic pushback operations by national security forces in violation of EU and international humanitarian law.

EU institutions have been unwilling to take action against the illegal pushbacks of migrants and refugees on European borders, a network of nongovernmental organizations (NGOs) also said recently.

These calls followed the bloc’s Commissioner for Home Affairs Ylva Johansson's statement last month that the EU expects Greece to investigate reports of illegal migrant pushbacks at its border.

In a recent report, the EU Agency for Fundamental Rights (FRA) revealed that migrants at EU borders still face difficult conditions and violations of rights in detention and reception centers. The report also noted that pushing migrants back to Turkey has become the de facto border policy of Greece and that torture, ill-treatment and pushbacks continue.

It is also known that Frontex, the European Border and Coast Guard Agency, has been involved in Greek pushbacks against migrants. A joint investigation by several international news outlets reported in October 2020 that Frontex had been complicit in maritime pushback operations to drive away migrants attempting to enter the EU via Greek waters. A month later, Brussels-based news outlet EUobserver revealed that Frontex exchanged letters with Greek authorities about Athens' orders to push back migrants to Turkish waters.