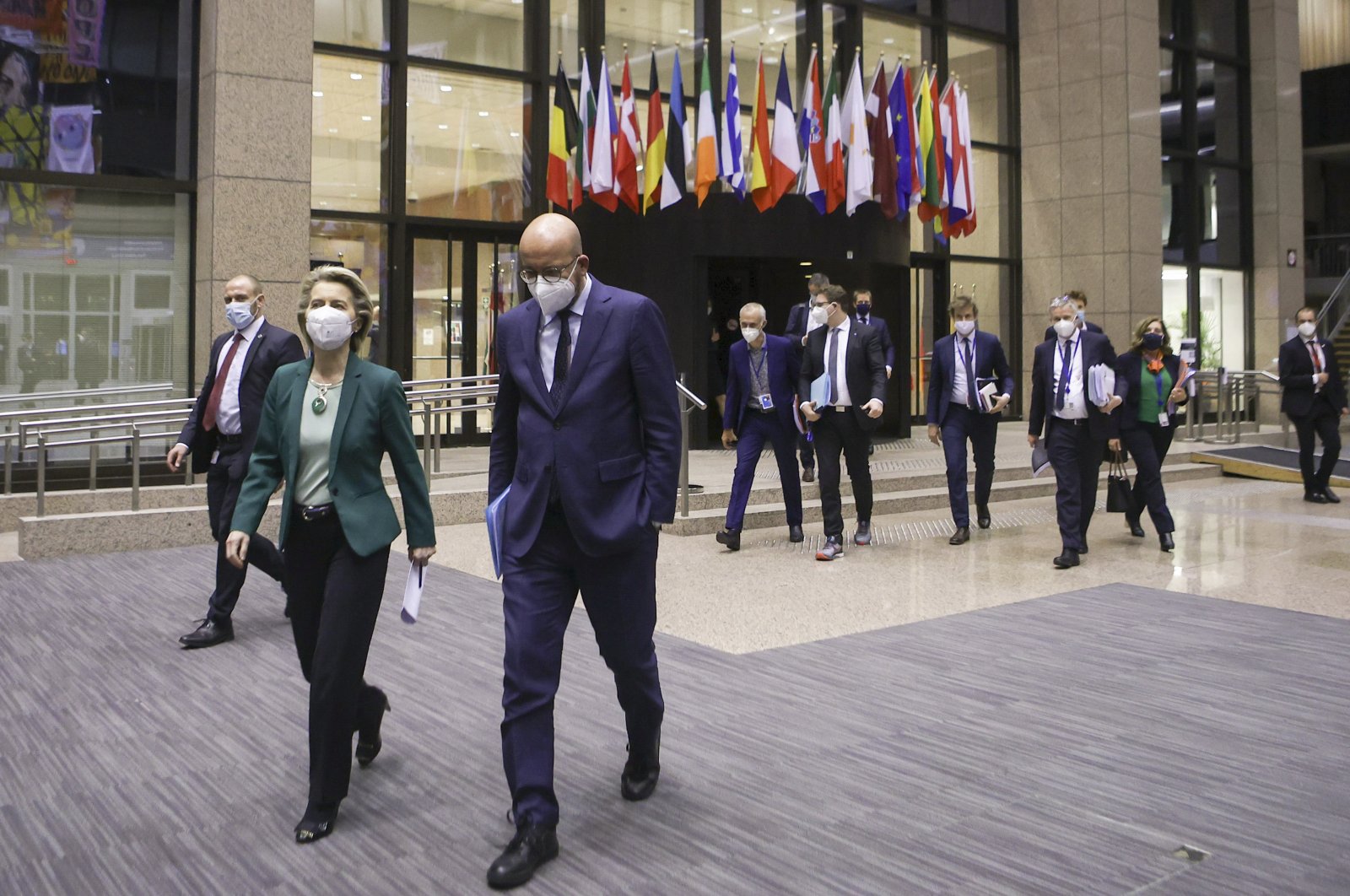 Although the outcome of the EU summit stressed the need for a positive agenda, Ankara says, it was seen that the document was written under the influence of "the narrow-minded claims" of several member states and with a one-way view of Turkey-EU relations

Turkey welcomes the rhetoric in the memorandum adopted by European Union leaders at their virtual summit and sincerely wishes to develop its relations with the bloc on the basis of cooperation and mutual benefit, while at the same time criticizing the document for its one-sided approach to issues and lack of concrete steps in the country's membership process to the bloc.

The Turkish Foreign Ministry said in a statement on Thursday that although the evaluation section of the report, "The status of political, economic and trade relations between Turkey and the EU," stressed the need for a positive agenda, "it was seen that it was written under the influence of the narrow-minded claims of several member states and with a one-way view of Turkey-EU relations."

"At the same time, we welcome the efforts made by the report to advance Turkey-EU relations on the basis of a positive agenda and the rhetoric that is tried to be reflected in the summit statement," it said.

"We hope that linking these steps to conditions in the summit statement, addressing only certain areas and postponing them to June will not lead to the loss of the positive momentum that has been captured."

"Although we are ready to work with the EU to continue implementation of the March 18 agreement with all elements, including cooperation on migration, and have presented concrete proposals on this issue, the fact that the EU side has to be selective and give vague statements, ignoring the comprehensive content of the agreement, remain weak steps for the EU, which we want to turn into a global actor," said the statement.

From Ankara to Brussels: Open chapters 23, 24

"Beyond dialogue in the areas of the rule of law and fundamental rights, we believe it is necessary to work on a chapter-by-chapter basis in accession negotiations. In this context, we expect the EU to open chapters 23 and 24 in accordance with the new enlargement strategy framework."

Mentioning Turkey's efforts to resolve regional crises in, for example, Libya, Syria and the South Caucasus, the ministry said mutual cooperation between Turkey and the EU would benefit the strengthening of regional peace and stability and the promotion of both sides common interests.

"In this regard, we are committed to immediately starting top-level dialogue that serves our common interests in all areas, including the economy, energy, transport, anti-terrorism, migration management and visa liberalization, not just regional and health-related issues."

The ministry said, "It is against international law for the EU, which is not capable of preventing the maximalist attitude of the Greek-Greek Cypriot duo and its unilateral provocative activities in the spirit of EU solidarity, to describe the drilling activities of both our country and the TRNC (Turkish Republic of Northern Cyprus) in the Eastern Mediterranean as illegal."

Mentioning that the EU does not have any authority to do so, it said "statements on Cyprus are detached from reality, aimed at defending the interests of the Greek Cypriot side and do not contribute to a possible compromise."

"The fact that the declaration, again, does not refer to the Turkish Cypriots and their legitimate rights and interests shows that the EU's biased attitude towards Cyprus continues."

"Positive steps that the EU will take in the direction of our common interests will be welcomed by candidate Turkey with positive steps," it concluded.

The EU leaders met virtually to discuss foreign policy issues, including Turkey and the Eastern Mediterranean.

The council adopted a conclusion saying that the EU is ready to engage with Turkey in a "phased, proportionate, reversible manner" to enhance cooperation in areas of common interest.

It also said that the EU is ready "to take further decisions at the European Council meeting in June," mentioning that the de-escalation of tensions in the Eastern Mediterranean, resumption of talks between Turkey and Greece and the upcoming talks on Cyprus under the auspices of the U.N. were welcomed.

The leaders said the EU is ready to launch "high-level dialogue with Turkey on issues of mutual concern" such as counter-terrorism, public health and climate.

The representatives also urged the commission to look for ways to improve people-to-people contact and mobility with Turkey.

"We invite the commission to present a proposal to the council for the continuation of financing of Syrian refugees in Turkey, as well as in Jordan, Lebanon and other parts of the region."

The read-out said cooperation with Turkey on migration should be strengthened in areas such as "border protection, combating illegal migration, as well as the return of irregular migrants."

According to the document, the 27-member bloc is committed to resolving the Cyprus dispute in accordance with the related United Nations Security Council resolutions, and the EU is looking forward to the resumption of talks under the auspices of the U.N., in which the bloc will participate as an observer.

The bloc will play an active role in the negotiations and will appoint a representative to the U.N. Good Office Mission, it said.

"We will continue to closely monitor developments and seek a coordinated approach with partners. The European Council will revert to this matter at its meeting in June," the read-out said.

Separately, it said the "rule of law and fundamental rights remain a key concern. Dialogue on such issues remains an integral part of the EU-Turkey relationship."

Turkey-EU relations are marked by disputes on several issues, including the Eastern Mediterranean tensions, Turkey's role in Syria, the migrant crisis and the stalemate in Turkey's accession process to the bloc. During a meeting in Brussels on Dec. 10, EU leaders decided to draw up a list of Turkish targets to sanction. But since then, the rhetoric on all sides has mellowed dramatically as Turkey and the bloc voiced their intent to "turn a new page." Turkey has recently reiterated that it is part of the bloc and sees its future in the EU, while it will continue efforts toward full EU membership. Turkish officials have also said that they hope for progress in 2021 and expect the bloc to take definitive action to this end. Most recently, the EU in January decided to hold off on potentially sanctioning Turkey thanks to positive developments made during a meeting with the bloc's foreign ministers.

Tonight's European Council conclusion on Turkey is "an important step in the right direction," its president said late Thursday.

"We are ready, with the European Council, with member states, to put more concrete proposals on the table in order to have a more stable, more predictable relationship with Turkey," said Charles Michel in a joint press conference with European Commission President Ursula von der Leyen following the summit.

Michel said the leaders tasked the European Commission and EU High Representative Josep Borrell with the preparation of a possible positive agenda with Turkey.

"A possible positive agenda but conditional. It means that we hope that Turkey will maintain a moderate behavior, positive behavior in the next weeks and in the next months," said Michel.

The topics of discussion with Turkey include modernization of the 25-year-old Customs Union, people to people activities and mobility, as well as migration, said Michel.

Michel also said they are in contact with Turkish authorities for a possible visit to Turkey in April.

Von der Leyen, for her part, said: "Turkey has shown a more constructive attitude, including in its bilateral relations with several EU member states. These are positive and welcomed steps on which we must try to build on," adding, however, the de-escalation remains fragile.

She recalled preparing a report "on the state of play of EU-Turkey political, economic and trade relations as well as on instruments and options on how to proceed now with this relationship" with Borrell.

"And in light of Turkey's recent more productive attitude, the report put forward possible areas of cooperation to allow for a progressive and proportionate approach," she said.

"We will further engage with Turkey on issues such as migration, financing, high-level dialogues and modernizing the Customs Union," said von der Leyen.

"If Turkey does not move forward constructively, if it returns to unilateral actions or provocations, in particular in the Eastern Mediterranean, of course, we would suspend this cooperation," she added.

Von der Leyen said the commission is also tasked with presenting a proposal to the council on how to support Syrian refugees in Turkey as well as in Jordan, Lebanon and other parts of the region.

"Turkey is shouldering the lion's share of the burden, but we think it is important to keep on going with the support in this humanitarian cause concerning the Syrian refugees in Turkey," she added.

The EU needs to establish contact with Turkey at every level, Germany's chancellor also said late on Thursday.

Speaking at a news conference after the video summit of European leaders, Angela Merkel welcomed the de-escalation of tensions in the Eastern Mediterranean.

She said one of the main topics in Thursday's summit was the EU-Turkey migration deal signed back in 2016.

Merkel said the agreement's utility has been proven with time, as it reduced irregular migration, curbed human smuggling and helped a large number of refugees.

"Now we need a two-step approach that we have actually decided on. We are now taking the first step and granting a mandate to further develop relationships and want to make other decisions in June," she said.

"Of course, we will also look at how the de-escalation in the Eastern Mediterranean will develop."