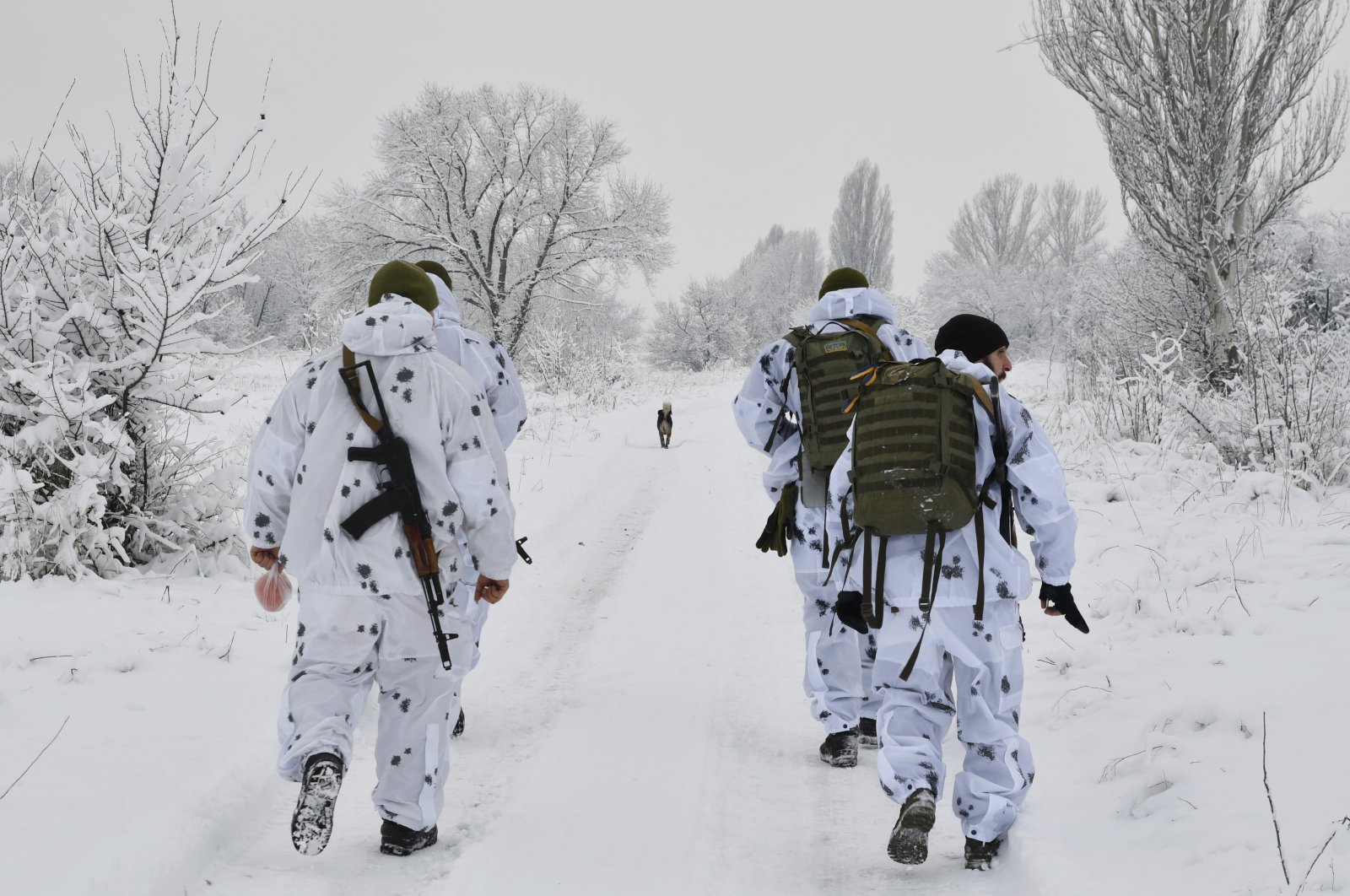 As the tension between Russia and Ukraine over the Donbass region becomes increasingly worrying, Turkey has offered to mediate as a regional actor with close contact with both countries. While concrete steps have yet to be taken in this direction due to Moscow's cold approach, analysts underline Ankara's potential to play a critical role in calming possible further crises by maintaining an impartial and pragmatist stance.

Being one of the rare NATO members having good political, economic and military relations with Russia, Turkey has been maintaining its neutrality and pragmatic approach since the escalation of tensions earlier this year while also continuing its position that supports Ukraine's territorial integrity and opposes the illegal annexation of Crimea, underlined Mehmet Çağatay Güler, a research assistant at the Foundation for Political, Economic and Social Research (SETA).

Salih Yılmaz, an academic at Ankara Yıldırım Beyazıt University and the chair of the Ankara Russian Studies Institute, underlined Russia's two main strategies in the ongoing Ukraine tensions. The first is to prevent the expansion of NATO in its borders by sitting at the bargaining table with the United States over Donbass. Another strategy of Russia is to guarantee the functioning of the NordStream-2 line through the Ukraine crisis and to conclude long-term gas contracts with European countries, according to Yılmaz.

"The United States, on the other hand, aims to sell its own gas to Europe in response to this strategy. As such, both Moscow and Washington are considering mutual gains," he said.

While President Recep Tayyip Erdoğan in October proposed Turkey's mediator role for the crisis, he later elaborated by pointing out that with the consent of both parties, Turkey can offer facilitation, mediation or support in any format. Foreign Minister Mevlüt Çavuşoğlu also said that Turkey has been in contact with both Russia and Ukraine, noting that Ankara advised both sides to remain calm and de-escalate the situation.

In an initial response, Kremlin spokesperson Dmitry Peskov dismissed Ankara's offer while speaking to journalists in Moscow, saying: “The fact is Russia is not a party to the conflict in Donbass. It will be impossible to find solutions to the problem at such a summit.” On the other hand, Ukraine welcomed Ankara's statements. "We will welcome any efforts that can help us to put an end to this war, to return Ukraine's territories that are currently under Russian control," Ukrainian Foreign Minister Dmytro Kuleba told a news briefing.

As Turkey knows that a crisis in Ukraine will affect the entire Black Sea region, it is making mutual suggestions and offering mediation for the two countries to make peace, Yılmaz noted, adding: "However, Russia does not intend to accept Turkey's mediation as it is in control of the Donbass crisis. It is thought that such an acceptance will bring more losses than gains for Russia. The only interlocutor for Russia is to secure the gains we have mentioned by negotiating with the U.S."

On the other hand, Turkey's mediation offer includes important gains for Ukraine, Yılmaz said. "The inclusion of Turkey, a NATO member and one of the largest countries in the Black Sea, in the crisis is an achievement for Ukraine. From the Russian point of view, Russia does not see the need for a mediator for the Donbass, because the Donbass is already unofficially controlled by pro-Russian separatists. Russia also thinks that Turkey's mediation can pull Turkey into the Ukrainian geography militarily."

According to Yılmaz, if Russia fails to negotiate with the United States and the crisis turns into a hot conflict, then it may accept the mediation of Turkey or another country to secure its gains. "This mediation will come into play in a possible hot conflict with Russia's annexation of new territories outside the current Donbass borders and Ukraine's request for a cease-fire. Otherwise, in the current situation, Russia does not want any other country to be involved in the event."

Güler also noted that Russia is disturbed by Ukraine's purchase of Bayraktar TB2 drones from Turkey and voices its displeasure with it frequently.

"Turkey will not leave Ukraine completely alone because of its relations with Russia, and it does not take an open position against Russia due to its deepening relations with Ukraine. Until now, Turkey seems to be an impartial country with the potential to mediate and should continue to take a position on this axis by taking into account its national interests," he added.

The crisis between Russia and Ukraine makes Turkey important for both countries, Yılmaz said, explaining: "Both countries expect Turkey to take an initiative in their favor regarding ships entering the Black Sea. From the perspective of Ukraine, the recent cooperation between the two countries in the military industry is important. Russia, on the other hand, offers to give, sell or co-produce some technologies that Turkey needs, as it sees long-term cooperation in the military industry between Turkey and Ukraine as harmful to itself. From this point of view, both Russia and Ukraine are trying to win Turkey's friendship. According to Russia, Turkey should at least be able to remain neutral, even if it does not take the side of Russia."

The rivalry between Russia and Ukraine and the former's relations with NATO have reached “dangerous” levels, Foreign Minister Çavuşoğlu said recently, adding: "We will not ignore our principles and close relations with Ukraine just because we have extensive relations with Russia."

Another important issue is the possible involvement of NATO against Russia in the crisis. Güler said that the tensions in eastern Ukraine have the potential to evolve into a hot armed conflict given the fact that there has been an ongoing military movement and deployment on the field. On the other hand, it is not possible for NATO forces to be directly involved in an armed conflict since Ukraine is not a NATO member.

"The statements and messages given by the leaders of NATO member countries as well as the statements of NATO Secretary-General Jens Stoltenberg clearly show that NATO will not directly participate in a possible conflict and will choose the path of economic sanctions. This does not mean that NATO member states will not provide any support to Ukraine, on the contrary, it is expected that weapons and economic support will continue."

"Since Ukraine knows this, it wants to be made a NATO member as soon as possible. The reason why Russia opposes Ukraine's NATO membership is due to the obligation of all NATO member countries to be involved in a possible membership," Yılmaz also said.

Kyiv has been battling a pro-Moscow insurgency in two eastern regions bordering Russia since 2014, shortly after the Kremlin annexed Ukraine's Crimean Peninsula. The United States and its allies have for weeks warned that Russia may be planning an invasion of Ukraine. Russia denies planning to invade Ukraine, but satellite pictures showing as many as 100,000 troops gathered on the border have set Western nations on edge.

Ukraine, which wants to join the NATO military alliance, has blamed Moscow for supporting separatists in the conflict in its east since 2014. Russia sees itself as threatened by a NATO advance and wants to prevent the neighboring former Soviet republics Ukraine and Georgia from joining the alliance. Fighting between Ukrainian government forces and pro-Russian separatists in Donbass has killed more than 13,000 people since 2014, according to the United Nations. The region is one of the several sources of friction between Russia and Ukraine.

Most recently, Ankara urged Moscow and the Western defense alliance to air their differences in direct negotiations proposed by NATO chief Jens Stoltenberg.

"If Russia has any certain specific expectation or issue from Turkey regarding reducing tensions between Russia and NATO, Turkey will evaluate this positively because our objective is clear," said Ankara.

NATO member Turkey has good ties with Moscow, though it opposes Russian policies in Syria and Libya. It has forged energy and defense cooperation with Russia while opposing Russia's 2014 annexation of Ukraine's Crimean Peninsula.

Since there is no possibility of a war involving NATO troops, Turkey will not need to take a position in this way, Güler also said and added: "It is essential for Turkey to maintain its existing position and to manage this process without harming its relations with both countries. It is important to stay away from the steps that will change the regional balances by protecting the strategic relations and commercial interests with Ukraine."