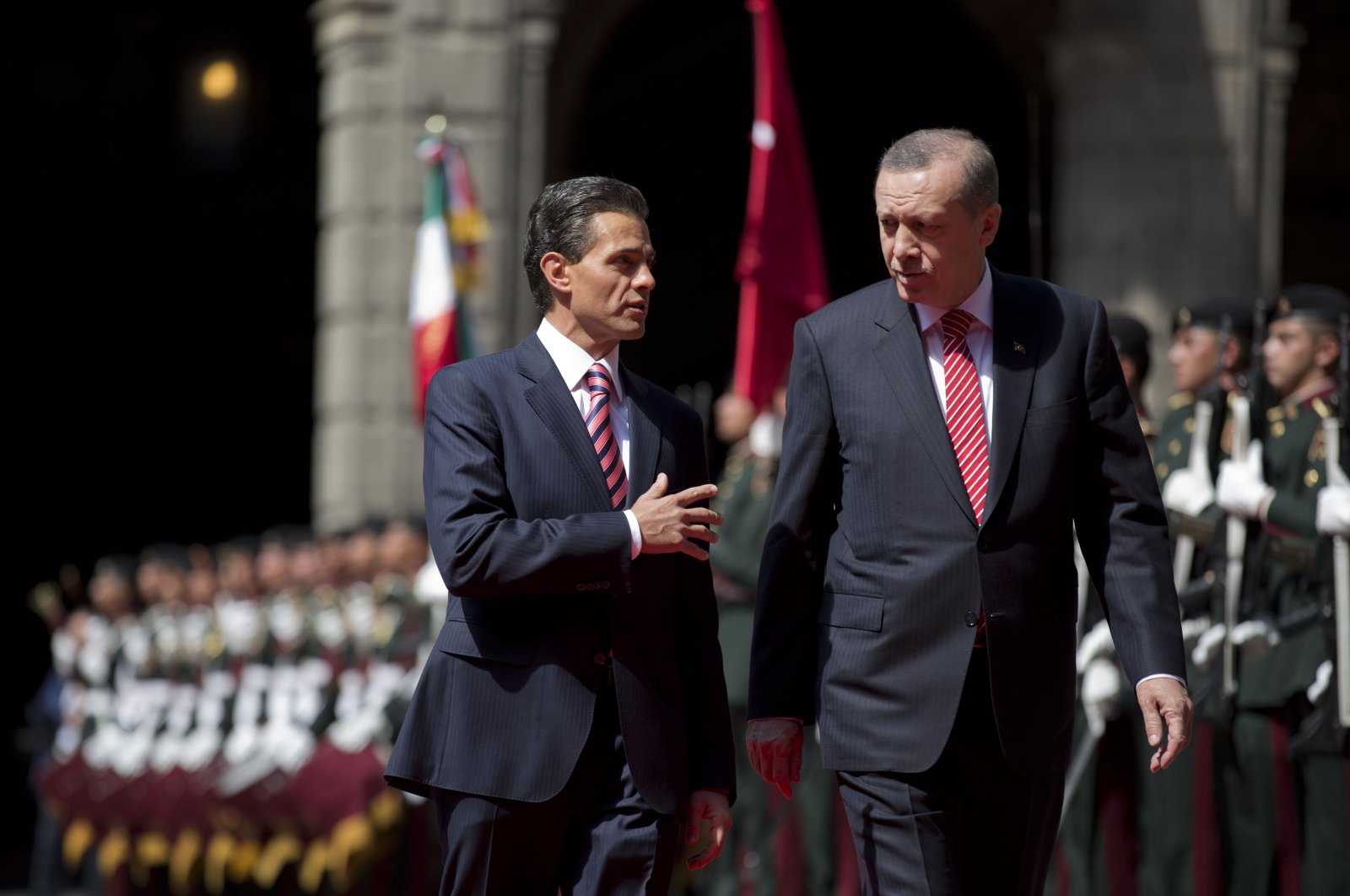 Although the pandemic has extended the distance between countries and forced them to focus on the crises at home, Turkey is determined to maintain relations with Latin American states through its humanitarian diplomacy and effective cooperation

Turkey has been expanding its horizons in terms of its multidimensional foreign policy, reaching out to regions previously unbeknownst to or disregarded by policymakers, such as Africa and Latin America. Although ongoing regional crises and the COVID-19 pandemic have restricted the country’s ability to make official contact over the past year, the government is determined to hold bilateral meetings to further expand ties in the near future. Likewise, Turkey’s effective use of nonstate actors and its humanitarian policies may enhance and further develop Ankara’s diplomatic ties with Latin American countries, as experts note these have become vital tools during the pandemic.

There has been a global downturn in terms of diplomatic correspondence between countries in the past year, according to Ariel Gonzalez Levaggi, the executive secretary of the Center for International Studies of the Pontifical Catholic University of Argentina.

“However, Turkey continued to be active in the region in nontraditional ways, such as providing medical supplies and equipment to countries such as Paraguay and Brazil and offering online courses thanks to the Yunus Emre Institute, in addition to the new social media activism of the Turkish Embassies in the region,” Levaggi told Daily Sabah, adding that he believes official in-person contact should return to previous levels once life returns to normal.

But Federico Donelli, a political scientist from the University of Genoa, said COVID-19 alone was not the sole reason behind the decline in the ties between Turkey and Latin America. He noted that the “southern dimension” of Turkey’s foreign policy has lost its momentum in recent years due to several reasons.

“The worsening of crises in neighboring zones, such as Syria, Libya, Nagorno-Karabakh, the Eastern Mediterranean and the military intervention in different contexts has – inevitably – forced Turkish foreign policymakers to reorganize their resources,” Donelli told, adding that he believes Turkish foreign policymakers who are dealing with ongoing crises on their doorsteps do not consider Latin America and Africa a priority.

However, he noted that Ankara’s involvement of nonstate actors – one of the trademarks of Turkey’s southern foreign policy – has allowed the country to maintain ties with Latin American countries even during the pandemic, adding that it is very likely there could be a significant recovery in trade and cultural exchange after the pandemic. Levaggi agreed, pointing out that widespread economic and political crises, coupled with the pandemic, have led many countries to adopt a more introverted approach for the time being.

“The post-pandemic world would offer a chance to adopt a more pragmatic and economy-centered agenda that can be complemented with cultural, humanitarian and media cooperation,” Levaggi said.

Ankara also expects to maintain contact with countries in Latin America and the Caribbean in 2021, according to diplomatic sources.

“Although it's not possible to set specific dates for senior-level official visits due to the ongoing pandemic in 2021, bilateral visits are expected to take place at the foreign minister and the head of state levels with Brazil, Cuba, Guatemala, Paraguay, Venezuela, Chile and Ecuador,” the sources expressed.

Meanwhile, associate professor Mehmet Özkan, the executive director of the Maarif Foundation in the U.S., who formerly served as the Turkish Cooperation and Coordination Agency’s (TIKA) Latin America director, told Daily Sabah that Turkey’s ties with countries in Latin America are already at a sufficient level. Özkan continued by saying that visits to Venezuela may take place in the near future, but he also noted that it is currently not possible to predict a road map on how relations may move forward in the post-COVID-19 era.

“It will be crucial for Turkey to focus on enhancing the capacity of the relevant Latin American state they’re providing development assistance to, in a period when state capacity took precedence over everything else in the face of the COVID-19 pandemic,” Özkan said.

Turkey’s diplomatic relations with countries in Latin America and the Caribbean date back to the second half of the 19th century, the era of the Ottoman Empire. In 1926, Chile became the first Latin American country to recognize the Republic of Turkey, and other countries followed its lead to establish ties and open diplomatic missions. However, Ankara’s relations with the countries in the region remained friendly but mostly “dormant” until the 1990s, according to the Foreign Ministry, which notes that it was mostly caused by “distance” and Cold War ideology when Turkey and Latin American countries were on the opposite ideological axis. Late President Süleyman Demirel’s trilateral visit to Argentina, Brazil and Chile in 1995 proved to be a turning point for relations, as it marked the first time a Turkish president had visited the region. With the establishment of the “Action Plan for Latin America and the Caribbean” in 1998 and the declaration of 2006 as the “Year of Latin America and the Caribbean” in Turkey, relations gained new momentum. From that point on, the two sides began to pay reciprocal official visits to each other.

In February 2015, President Recep Tayyip Erdoğan went to Mexico, Colombia and Cuba, becoming the second Turkish head of state to visit the region. A year later, he visited Chile, Peru and Ecuador to not only enhance economic ties but also to sign a series of military, cultural and technical cooperation agreements with the region to expand cultural interaction and diplomatic representation as part of Ankara’s multidimensional foreign policy.

Erdoğan’s visit also marked the establishment of the TIKA's first coordination office in Mexico in 2015 and the second coordination office in Bogota in 2016. The TIKA, referred to as Turkey’s global “helping hand,” has been contributing to the education, health, water, emergency and humanitarian assistance, social assistance, cultural life, transportation and agricultural sectors. It contributed around $11 million in 127 projects between 2012-2017 alone. Ankara has also increased the number of its embassies in Latin America to 16 in 2021, from six in 2002.

The academics noted that Turkey’s approach to political crises in Venezuela and Bolivia generated different responses from different countries. Turkey has strongly opposed foreign intervention in both cases, as the country has experienced several military takeovers and coup attempts, which left a lasting putschist footprint on the country’s politics. Likewise, Venezuela had opposed the defeated coup attempt led by the Gülenist Terror Group (FETÖ) in 2016 and stood in solidarity with Ankara following the attempt.

For Levaggi, the perception of Latin American countries of Turkey’s position varied. While it caused mistrust among the 17-member Lima Group, center-left governments like Uruguay and Nicaragua agreed with it.

Meanwhile, Donelli argued that Turkey’s stance on Venezuela, in particular, was “ideologically inspired” but politically irrational, as he claimed the Turkish criticism of foreign interference in Venezuelan affairs had “backfired.”

“The Western world’s perception that there are no differences between (President Nicolas) Maduro’s Venezuela and Erdoğan’s Turkey has increased. At the same time, in the eyes of many Latin American people, the Turkish position has lost some of its popularity as the protests against Maduro had attracted cross-party support in the region,” he added. Meanwhile, Özkan said Ankara can contribute by acting as a mediator between Maduro, the opposition and regional countries to solve the crisis.

During the COVID-19 pandemic, Turkey sent medical aid to over 140 countries, while some two-thirds of the world requested medical supplies from Turkey to fight the coronavirus, and nearly half of these requests have been met.

“Undoubtedly, Turkish humanitarian diplomacy has gained credibility in the last decade,” Donelli said, as Turkey became one of the first countries to respond to the desperate calls for medical assistance at the beginning of the pandemic.

“The solidarity shown by Turkey led to an increase of popularity among many people,” he said.

In June 2020 alone, Turkey sent hundreds of domestically produced respirators, protective suits and other medical supplies like masks and protective glasses to Brazil, Paraguay and Venezuela.

In the 1990s, Latin American telenovelas like Marimar, Rosalinda, Muneca Brava, Maria la del Barrio and many others mesmerized Turkish audiences, young and old. But Turkish soap operas have turned the tide, becoming a global phenomenon with millions of people watching them in around 100 countries.

“Turkish soap operas are a lifestyle phenomenon that helps promote the Turkish brand worldwide,” Donelli said, adding that “soap power,” which acts as a platform, helps Turkey promote its culture and generate positive impressions about the country in a region where knowledge about Turkey is rather limited.

Özkan agreed that Turkish TV series give Ankara the opportunity to promote Turkey and enhance Latin American people’s perceptions, but he also pointed out that this needs to be further amplified in other areas as well.

But Levaggi said one should not be too optimistic about the use of cultural tools in achieving concrete political results.

“It opens doors but does not resolve issues that involve national interest or delicate political issues,” he said.

Turkey did not hesitate to open its doors to millions of Syrian refugees fleeing conflict in their homeland and can share its experience with Latin American countries, which are also dealing with a similar wave of migration of around 4.5 million Venezuelans.

“Turkey needs to convey its Syrian refugee policy to Latin American countries,” Özkan said, adding that most of the countries do not know how to handle such a crisis. He continued by suggesting that Ankara, with the help of its Disaster and Emergency Management Authority (AFAD) and the Directorate General of Migration Management, could share its knowledge on the subject with Colombia, Ecuador and Peru.

According to Levaggi, there are many opportunities for Turkey to develop its interests in Latin America, especially by particularly focusing on investing in “human and material resources to understand the region and putting in extra effort in visualizing specific areas to develop investments and expand trade.”