Erdoğan slams US for 'siding with PKK terrorists' 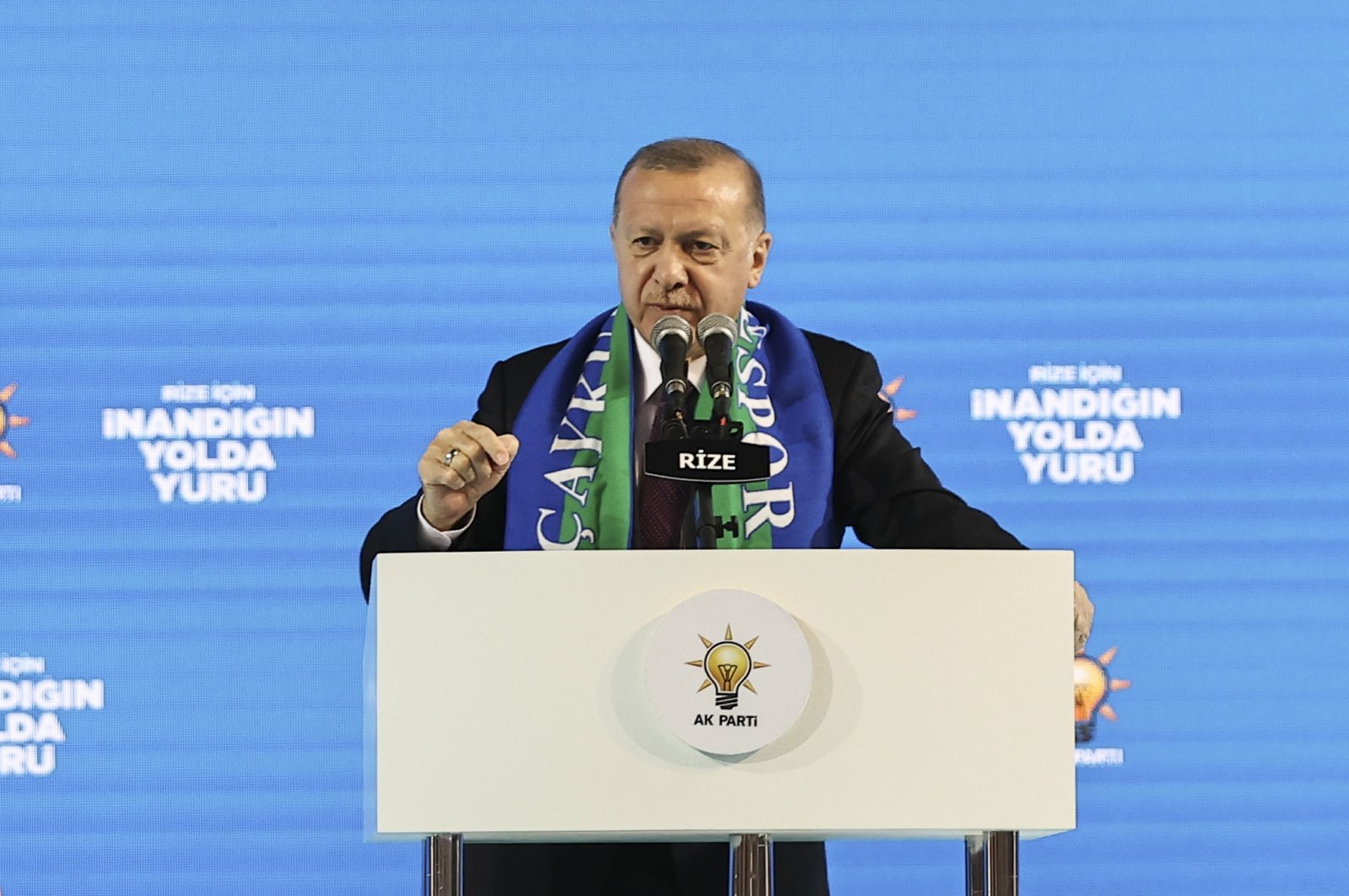 President Recep Tayyip Erdoğan on Monday criticized the U.S. statement on a recent terror attack in which 13 Turkish citizens were killed by the PKK terrorist group in Iraq's northern Gara region.

Speaking at the ruling Justice and Development Party (AK Party) congress in the Black Sea province of Rize, Erdoğan said that the U.S. has sided with the PKK and its Syrian branch, the YPG, providing truckloads of ammunition to them.

"The U.S. statement on the PKK’s execution of Turkish citizens in northern Iraq is ridiculous. They claim they do not support the PKK, but they certainly do," he also said.

"If you want to continue our alliance globally and at NATO, then you must stop siding with terrorists," Erdoğan added.

The president said that the blood of innocent people killed in northern Iraq is on the hands of all those who defend, support and sympathize with PKK terrorists.

"This is not the PKK's first massacre of civilians," said Erdoğan, calling on U.S. counterpart Joe Biden to recognize the terrorist group as well.

Erdoğan's remarks came after the U.S. State Department issued a controversial statement on the incident.

"The United States deplores the death of Turkish citizens (...) We stand with our NATO ally Turkey and extend our condolences to the families of those lost in the recent fighting. If reports of the death of Turkish civilians at the hands of the PKK, a designated terrorist organization, are confirmed, we condemn this action in the strongest possible terms," it said.

Turkey also summoned the U.S. ambassador to Ankara David Satterfield and voiced "strong" reaction over Washington’s statement on the killing of 13 Turkish citizens.

Despite condolences from some countries, many international actors remained silent or hesitated to send genuine messages over the PKK terrorist attack.

Later in another statement, Çavuşoğlu also said that countries claiming to be fighting terrorism are either silent on the PKK massacre or trying to paint over it.

“Countries claiming to be fighting terrorism are either silent on PKK massacre or trying to slur over it with ifs and buts,” he said.

Turkish officials consistently criticize Western counterparts for their selectivity and use of “buts and ifs” in condemning terrorist acts. They argue that terrorism needs to be strongly condemned regardless of the perpetrators.

Turkey will continue undeterred in its fight against terrorist organizations both in the country and abroad, Çavuşoğlu asserted in his speech alongside his Ethiopian counterpart Demeke Mekonnen during the opening of a new building for the Ethiopian Embassy in the capital Ankara.

“We have never been hypocritical like many Western countries,” he added.

Erdoğan also announced that Turkey has killed 42 terrorists in their hideouts and caves during the first phase of Operation Claw-Eagle 2.

"Turkey will continue its fight against terror until the last terrorist is eliminated; no matter where they are hiding, in Syria, in Iraq, nowhere is safe anymore," he added.

"No country can question Turkey’s anti-terror operations in northern Iraq following the PKK’s Gara massacre. From now on, they either stand with Turkey against bloody terrorist groups or will be held accountable for supporting terrorists through international platforms," Erdoğan said.

Turkey launched Operations Claw-Tiger and Claw-Eagle last June to ensure the safety of the Turkish people and its national borders by eliminating terrorist threats. Operation Claw-Eagle 2 was launched last week.

At least 48 PKK terrorists, including two senior members, were eliminated during the "extremely special and critical" operation in the Gara region, Akar said, adding that the region was mostly cleared of the terrorist group.

"The operation has been completed. Our land and air elements returned to their bases and barracks safely," he said.

During the campaign, more than 50 terrorist targets, including ammunition depots, caves and bases in Gara were destroyed, Akar stated.

Three Turkish soldiers were killed and three others injured in the land operation, he noted.

The PKK managed to establish a foothold in Iraq, particularly in the Sinjar region, in mid-2014 on the pretext of protecting the local Yazidi community from Daesh terrorists. Since then, the PKK has reportedly established a new command base in Sinjar to carry out logistical activities.

Recently, Akar expressed that Turkey was prepared to provide assistance to Iraq in clearing terrorists from the region. Iraq's Kurdistan Regional Government (KRG) has called the PKK's presence in Sinjar unacceptable and urged the militants to leave the area.