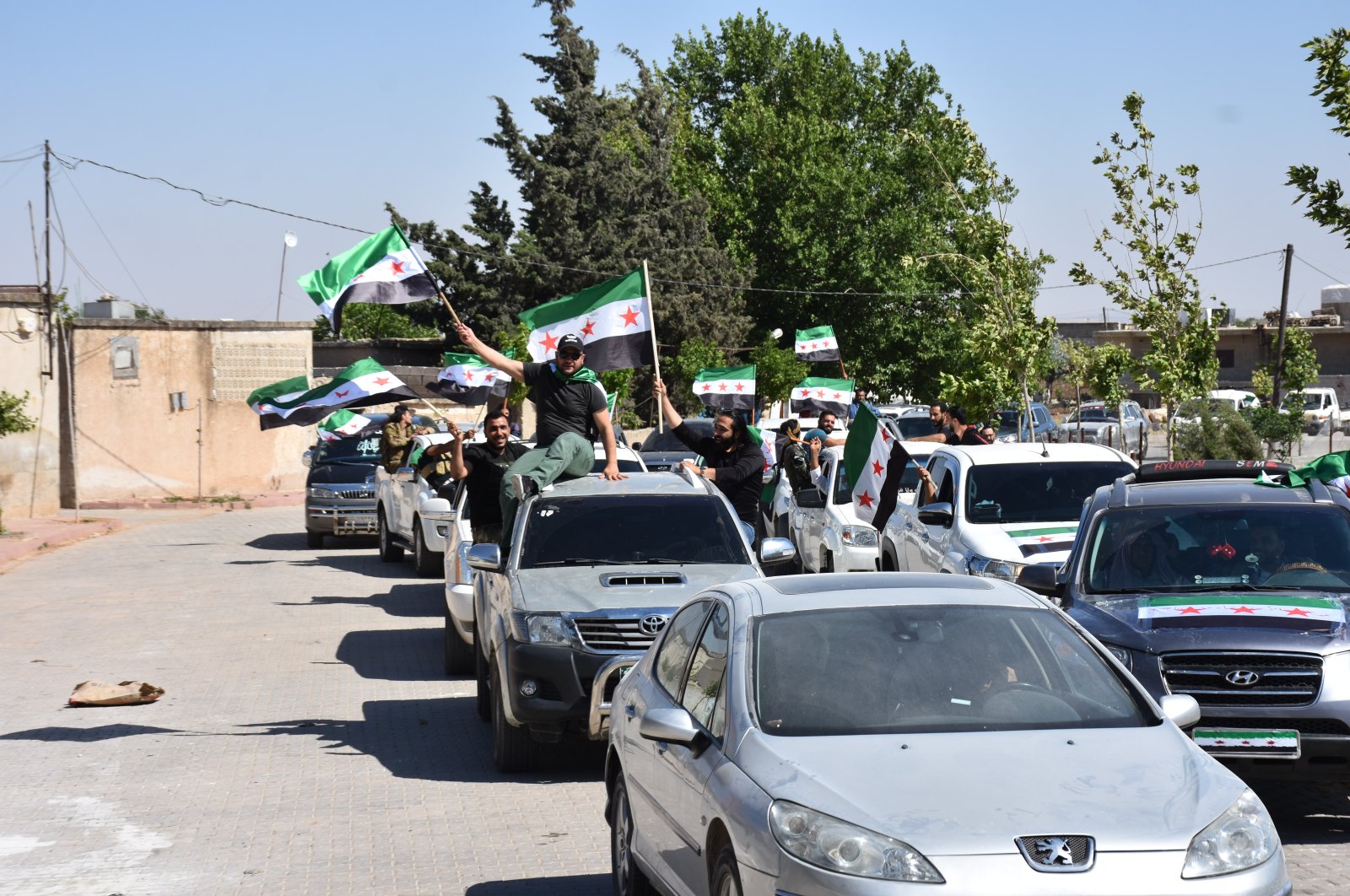 United States-backed YPG terrorists have killed at least eight civilians and injured 27 others since Monday as they opened fire on protestors who were demanding an end to the PKK-linked terrorist group's oppression in the areas they occupy in northern Syria.

The protests against the YPG's forced recruitment of children started in the town center of Manbij and spilled into rural areas, continuing to grow despite the curfew the terrorist group imposed.

The demonstrators are demanding an end to detentions, the abolition of "conscription" and the prosecution of the terrorists who opened fire on demonstrators.

YPG terrorists, who opened fire to disperse the protesters, have detained many civilians who participated in the popular movement over the last two days.

Amid the continued demonstrations, the terrorist organization reportedly dispatched dozens of its members from northern Raqqa province and its surroundings to Manbij.

A show of support was held for the people of Manbij in the Azaz district of northern Syria.

The demonstrators chanted slogans including "Manbij is free and will remain free" and "We stand with the people of Manbij."

Also, the Syrian Interim Government slammed the terrorist group for firing on protesters in Manbij and called on the international community to fulfill its responsibility to protect civilians in the district.

Furthermore, the Syria Clans and Tribes Council (SKAM) voiced support for the people of Manbij.

"We follow the events in Manbij with concern. We support the rightful uprising of the people of Manbij with all our means. The YPG/PKK is a terrorist group that serves non-national and separatist projects," SKAM said in a statement.

The group also called on the people of Manbij to support the Syrian National Army (SNA) to save them from the terrorists.

Resentment against YPG rule has grown in north and eastern Syria among the predominately Arab population, residents and tribal elders said. Many object to the compulsory conscription of young men and the discrimination in top leadership layers.

People in Manbij, where Arabs make up 90% of the population, have been protesting the forced recruitment of their children since Monday.

The fate of thousands imprisoned in their jails has also been a major bone of contention, according to residents and tribal figures.

On Monday, hundreds of people gathered in Manbij's district center and surrounding neighborhoods to protest the terrorist group.

One civilian was killed and three others were injured when terrorists opened fire on the people protesting against the forced recruitments.

The protests took a violent turn when hundreds of demonstrators marched near checkpoints around the city a day after one civilian was killed in the protests that swept the area demanding the end of YPG rule over the mainly Arab tribal population.

Documenting the violations against civilians in Syria, the Syrian Network for Human Rights (SNHR), in its report released on May 22, said nearly 3,800 civilians are forcibly held in detention centers established by the YPG-led groups.

Some 30 kilometers (20 miles) from the Turkish border, Manbij occupies a critical spot in the map of the Syrian conflict, near the junction of three separate blocks of territory that form spheres of the Syrian regime, Turkish and U.S. influence.

The U.S.-backed YPG made it to Manbij in August 2016 after ousting Daesh terrorists who had captured the city from the moderate opposition in January 2014. Before the YPG, Manbij was administered by the Revolution Assembly, which represented 17 different groups and tribes.

To assuage the security concerns of Turkey, Washington and Ankara reached the "Manbij Agreement" in June 2018, which focuses on the withdrawal of YPG terrorists from Manbij to stabilize the region. The deal presented a three-stage process to be realized within 90 days – the withdrawal of the terrorist organization, joint Turkish-American patrols, which began in November 2018, and the establishment of a new local administration made up of people who reflect the ethnic composition of the area. However, Washington has long been dragging its feet on the implementation of the Manbij deal.

Most recently, the U.S. Defense Department requested over $500 million in aid to be distributed to various organizations, including the YPG terrorist group.

Commenting on the bilateral relations between Ankara and Washington late Tuesday, Turkish President Recep Tayyip Erdoğan said he will discuss the recent tensions between the two NATO allies with his American counterpart, Joe Biden, in the upcoming NATO leaders' summit.

The meeting between Erdoğan and Biden will take place on the sidelines of the June 14 NATO leaders summit in Brussels, Belgium.

As he reiterated disappointment over the U.S.' support for YPG terrorists in northern Syria, Erdoğan said: "We have provided every evidence revealing the ties between the PKK and YPG but they choose to turn a blind eye to these."

"Those who corner Turkey this way will lose an important friend," said Erdogan, adding Turkey is "a strong and reliable partner" in NATO.