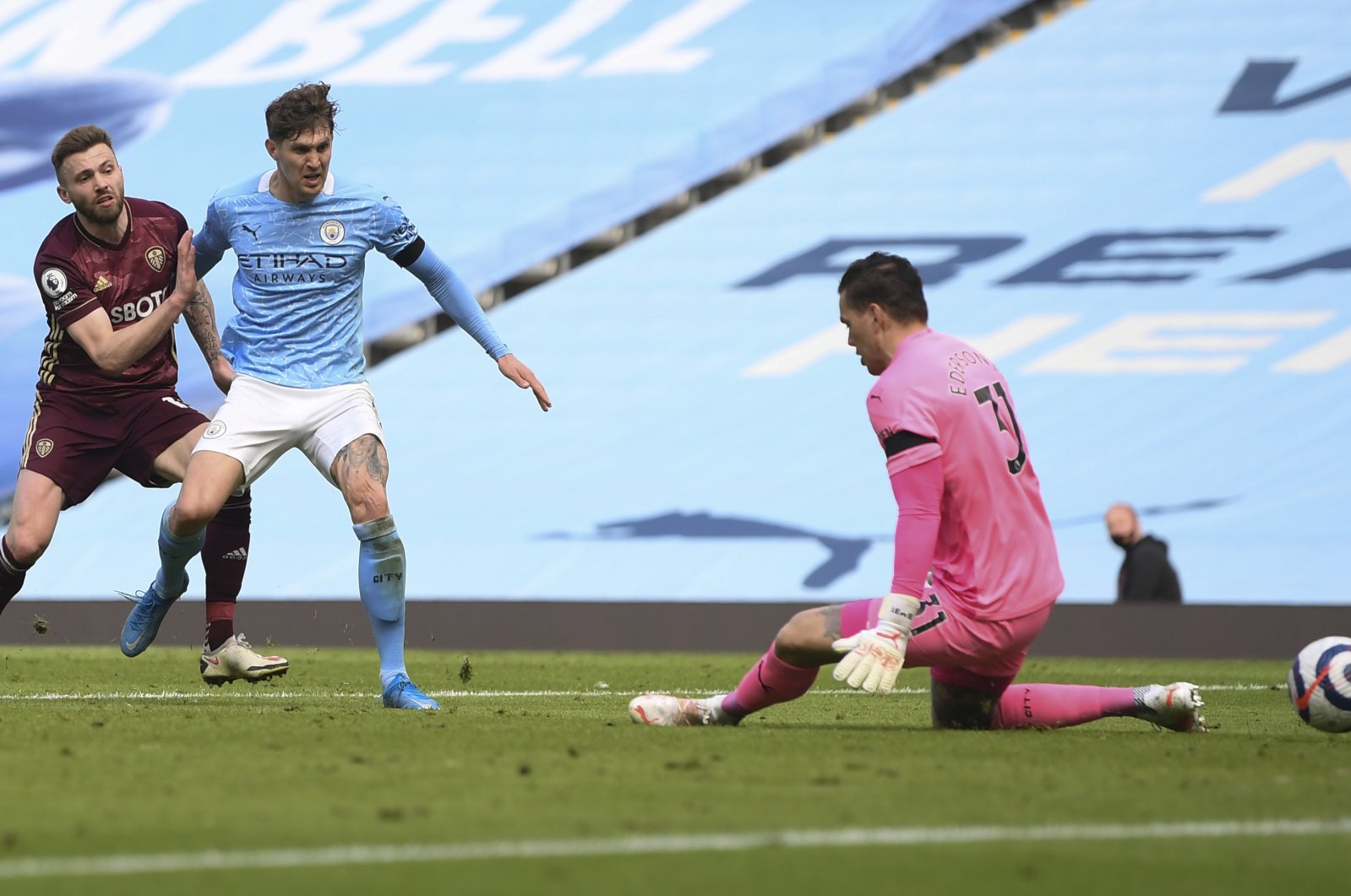 City is counting down to their third title in four seasons, but Stuart Dallas's stoppage-time strike leaves them still needing 11 points from their last six games to clinch the crown.

Just a fourth league defeat of the season for the leader came after Pep Guardiola made seven changes following its midweek Champions League quarter-final first-leg win over Borussia Dortmund.

With its Belgian star Kevin De Bruyne on the bench at the Etihad, City was below its best and made to pay by a lively Leeds side that move up to ninth in its first season back in the top flight after a 16-year absence.

"We did not create enough for the forwards. It is part of the game," Guardiola said.

"When they defend in the way they were you have to stop them running and we did not do that."

Leeds took the lead three minutes before half-time when Dallas took Patrick Bamford's lay-off on the edge of the area and hit a firm low shot that left Ederson rooted to the spot as it rebounded in off the post.

Referee Andre Marriner initially booked Cooper after he caught the Brazilian on the knee, but changed his decision to a red card after reviewing the incident on the pitchside monitor.

City equalized in the 76th minute when Bernardo Silva flicked the ball into the path of Ferran Torres and the Spaniard clipped his shot past Illan Meslier.

But in the first minute of stoppage time, City was caught by brilliant Leeds counter. Dallas raced onto a fine through ball from Ezgjan Alioski and guided a cool finish past Ederson.

Liverpool is desperately trying to salvage its troubled campaign by qualifying for next season's Champions League via a top-four finish. Beaten 3-1 by Real Madrid in the Champions League quarter-final first leg on Tuesday, Jurgen Klopp's team briefly moved into fourth with a dramatic late winner at Anfield.

Liverpool had not won at home since December, but the Reds avenged their humiliating 7-2 defeat at Villa in October when England right-back Trent Alexander-Arnold curled home in stoppage time.

"I can't remember the last time we did it easy but it's fine in our situation after losing six home games," said a relieved Klopp.

Villa striker Ollie Watkins scored a hat-trick in that rout and he was back on the scoresheet after 43 minutes. Taking a touch from John McGinn's pass into the Liverpool area, Watkins hit a low shot that squirmed under Alisson Becker's weak attempted save.

Liverpool was denied an equalizer moments later when Brazilian midfielder Roberto Firmino's close-range finish was chalked off by video assistant referee (VAR) for an extremely tight offside call against Portugal forward Diogo Jota in the build-up.

But Egypt star Mohamed Salah leveled in the 57th minute with a close-range header after Andrew Robertson's shot was parried into his path by Emiliano Martinez.

Villa winger Trezeguet hit the post in the second half, but Alexander-Arnold won it in added time when the right-back blasted home from the edge of the area.

Having defeated Porto in Champions League quarter-finals earlier in the week, Chelsea ensured Liverpool's move into the top four was a brief one as it surged into a 3-0 lead inside half an hour against Palace.

Kurt Zouma's header from Mason Mount's free-kick rounded off a dominant first-half as Thomas Tuchel's men made it 12 wins in 16 games since the German took charge in January.

Christian Benteke pulled a goal back for Palace after the break, but Pulisic converted Reece James's deflected cross at the back post to round off the scoring with his second of the day.

West Ham started the day in fourth place but dropped to sixth ahead of its match against third-place Leicester on Sunday.