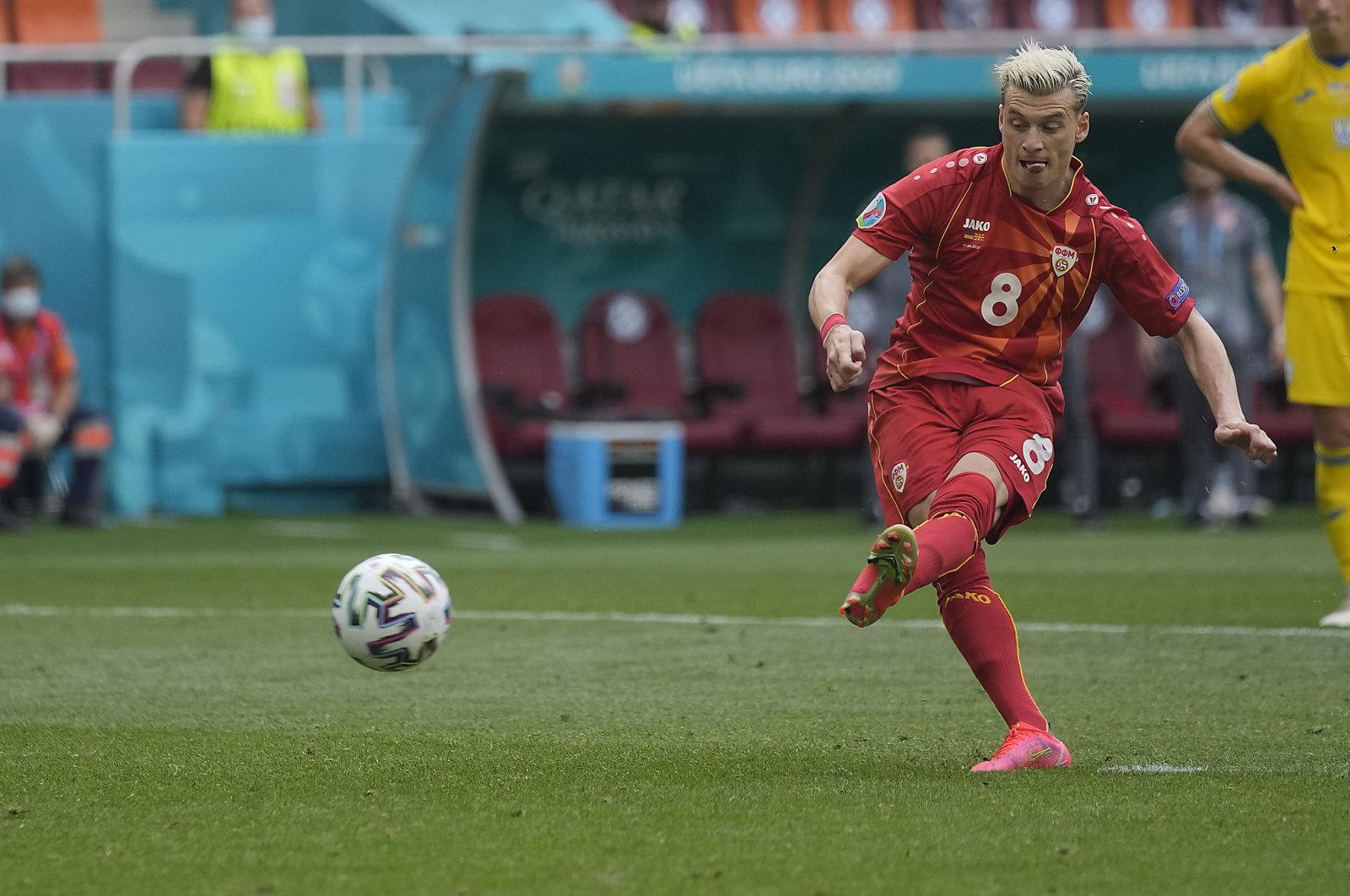 Players competing at Euro 2020 have been failing to convert penalties to goals at a historically low rate, with only a third of the shots taken from the spot finding the net so far.

North Macedonia midfielder Ezgjan Alioski and Ukraine opponent Ruslan Malinovskyi both failed to score from the spot in the second half of their game on Thursday.

When Memphis Depay scored for the Netherlands later Thursday, it meant only one-third of Euro 2020 penalties had been scored so far. Cristiano Ronaldo – for Portugal against Hungary – is the only other player to convert a penalty of the six awarded so far, though Alioski did follow up to put in the rebound after his was saved.

The Euro 2020 strike rate is way down from the 74% scored from all penalties awarded at final tournament games since the first in 1960 through Euro 2016.

The very first penalty awarded was missed, by Josef Vojta of Czechoslovakia against Soviet Union great Lev Yashin in the 1960 semifinals.

The four penalties missed in the first 16 matches at Euro 2020 equals the total failures – from 12 penalties awarded – at the entire 51-game tournament five years ago.

Ronaldo had one of those missed penalties at Euro 2016, hitting the post in a 0-0 draw against Austria.

By scoring the first successful penalty at Euro 2020, Ronaldo also matched his feat from the 2018 World Cup. His hat trick in Portugal’s opening 3-3 draw with Spain included a penalty.

The 2018 tournament in Russia set World Cup records for penalties awarded, 29, and scored, 22.

Here’s a look at the first six penalties at Euro 2020.

In a game that will be remembered for the collapse of Denmark playmaker Christian Eriksen, Pierre-Emile Hojbjerg had to step up in his absence.

Hojbjerg's weak, low shot allowed Finland goalkeeper Lukas Hradecky to dive to his left and make the save.

Eriksen is the team’s usual penalty taker. The missed penalty allowed Finland to win the match 1-0.

Cristiano Ronaldo set the all-time scoring record for the European Championship with an 87th-minute penalty, putting Portugal up 2-0 against Hungary in Budapest.

Ronaldo took a fast run-up and sent a hard shot to the bottom right corner of the net as goalkeeper Peter Gulacsi guessed wrong and dived to his right.

It was Ronaldo’s 10th goal over five European tournaments. He added an 11th in stoppage time in Portugal's 3-0 victory.

Wales captain Gareth Bale was outstanding in his team’s 2-0 victory over Turkey, except for his wild penalty miss in the 61st minute.

Bale took a stuttering run-up then placed his left-footed shot high over the bar as goalkeeper Uğurcan Çakır guessed right by diving to his right.

Ezgjan Alioski’s powerful left-footed penalty for North Macedonia was too close to Ukraine goalkeeper Georgiy Bushchan and at an ideal height for a blocking save diving to his left.

However, the ball came right back to Alioski, who won a race against an onrushing crowd of teammates to score on the rebound.

The 57th-minute goal cut his team's deficit to 2-1, but Ukraine held on for the victory.

Ukraine could have put its game against North Macedonia out of reach with an 84th-minute penalty awarded for handball after a long video review.

Ruslan Malinovskyi ran up casually and placed a rising shot that let goalkeeper Stole Dimitrievski make a comfortable save diving to his right. Ukraine hung on for the 2-1 victory.

Generating power from a short run-up, Memphis Depay shot low into the corner beyond Austria goalkeeper Daniel Bachmann diving to his right.

The goal gave the Netherlands an 11th-minute lead in a 2-0 victory in Amsterdam.