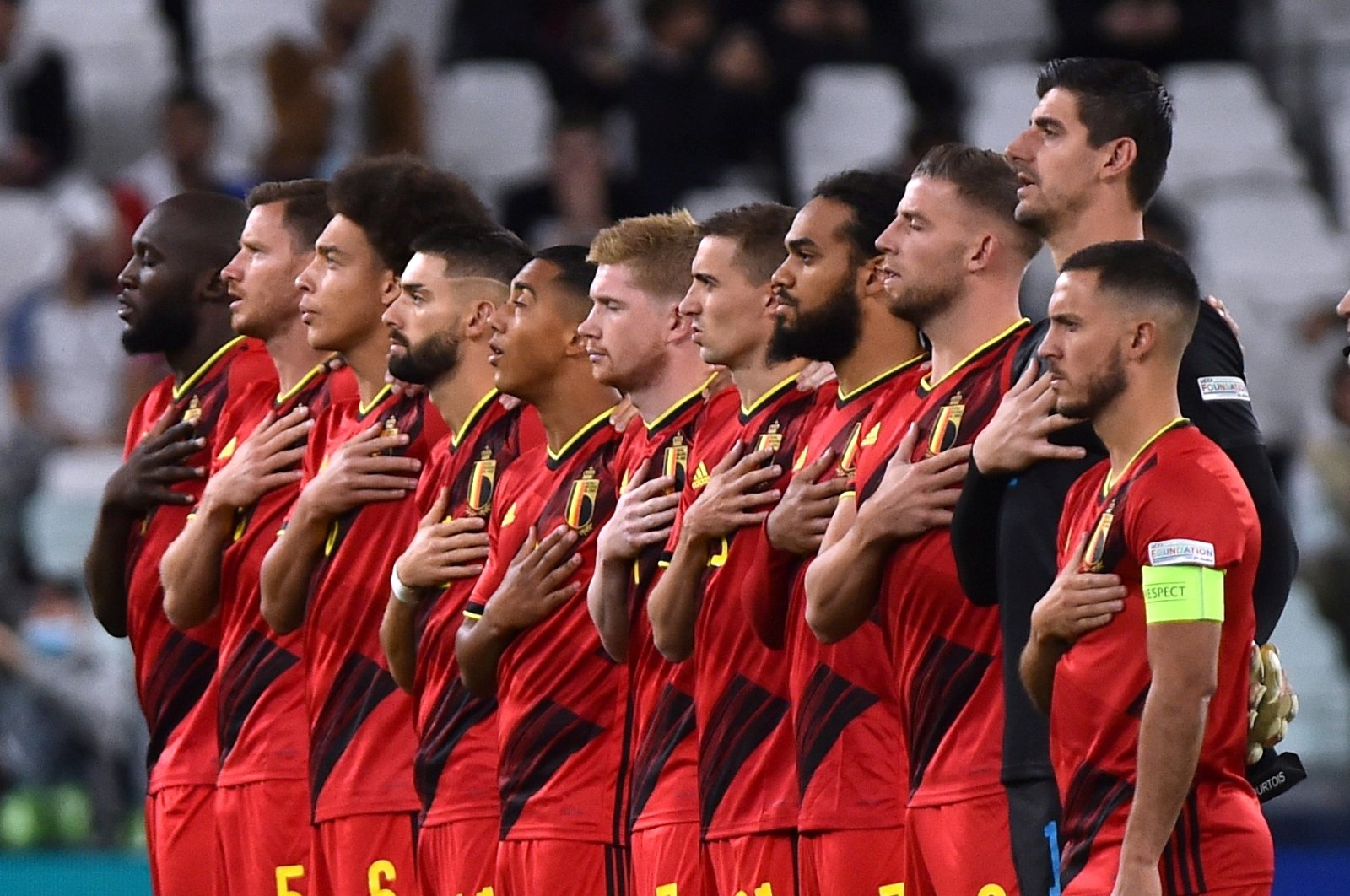 Belgium players line up during the national anthems before a UEFA Nations League semifinal match against France at the Allianz Stadium, in Turin, Italy, Oct. 7, 2021. (Reuters Photo)
by Anadolu Agency Oct 17, 2021 12:12 pm

Ranked the top national team since 2018 with a combined squad value of over $570 million, Belgium is an impressive squad on paper, but that might is yet to materialize into any trophies

Belgium might be ranked the top national football team in the world with its star-studded squad, but when it comes to achievements and tangible success, Belgium has zero international trophies.

There are great expectations surrounding Belgium – a team made up of star players known as the "golden generation" for several years – but its only tangible achievement was third place at the 2018 World Cup.

Even if its efforts did not fully materialize, Belgium had to make serious reforms and investments to create the star generation.

Belgium started serious reforms in its squad after it was knocked out of the 2002 World Cup in the round of 16 by Brazil, the eventual winner of the tournament. Veteran players hung up their jerseys and the team required serious change.

In the coming years, several new players were called up to the squad, but none became permanent nor offered Belgium the contribution needed for success. Therefore, the team failed to qualify for Euro 2004 and the 2006 World Cup.

The first spark of change was the appointment of Michel Sablon as Belgian Football Director in 2006. He came with a solid plan to change the course of the national team.

Sablon’s first move was to start extensive research regarding the youth team in various countries, including Germany and The Netherlands. A scientific approach was instilled in football academies and the primary goal of academies changed from winning matches to effectively raising young players.

Spreading and applying these changes to the nation's football was challenging. Sablon and his crew had been the target of a lot of criticism, but the results soon started to show.

In 2008, several players on the national team started to make transfers to important leagues such as the English Premier League.

Manchester City legend Vincent Kompany was the first big Belgian name to move to the Premier League as the club was sold to Abu Dhabi United Group and started to build a competitive squad by making big-name transfers in 2008.

Marouane Fellaini moved to Everton from Standart Liege in 2008, and Thomas Vermaelen transferred to Arsenal from Ajax in 2009.

When the European qualifiers for the 2014 World Cup came around, Belgium's new squad was nearly complete and they had their first challenge ahead.

The golden generation had not totally failed in their first international competition as they were able to reach the quarterfinals, where there were knocked out by a Lionel Messi-led Argentina 1-0.

In 2014, Belgium climbed to the fourth spot in FIFA World Rankings. One year later, it reached the top spot for the first time in history.

After making a name for themselves, the Belgians were ready for their next challenge in Euro 2016. The team qualified for the group stage and reached the round of 16, finishing Group E in the second spot behind Italy.

After beating Hungary 4-0 in the round of 16, the quarterfinal match against Wales seemed easy enough, but Wales gave Belgium quite a shock and eliminated it in a 3-1 thrashing.

After the Euro 2016 disappointment, Belgium was hopeful for the upcoming 2018 World Cup as most of the squad was in their prime and they had some of the most valuable players on the globe like De Bruyne, Hazard and Lukaku.

The Red Devils went through the group stage flawlessly and eliminated Japan 3-2 in the round of 16, before beating Brazil 2-1 in the quarterfinals. Another team with its own golden generation, France, eliminated Belgium 1-0 in the semifinals and moved on to defeat Croatia 4-2 in the final and win the World Cup.

Belgium took on England in the third-place match and managed to win its first-ever bronze medal in World Cup history with a 2-0 victory.

When Euro 2020 was on the horizon, The Devils had several veteran players with enough talent to carry the team to success. The coronavirus pandemic affected the championship and postponed it to the summer of 2021, but Belgium stayed on track and reached the group stage.

The Red Devils went three for three in group stage matches and defeated the defending champion Portugal 1-0 in the round of 16. Unfortunately, Italy, which would go on to win the tournament, defeated Belgium 2-1 and the team had to again exit the championship in the quarterfinals.

The same year, UEFA organized another international tournament, the Nations League, giving Belgium a chance to win something before the end of the year. Belgium grabbed five wins in six matches and finished Group A2 in the top spot.

According to the tournament rules, Belgium took on France in the semifinals and victory seemed near this time. But in another heartbreak for Belgium fans, France took them out with a 3-2 win in the semifinals. Belgium proceeded to lose third place to Italy with a 2-1 defeat.

Today Belgium has a squad valued at approximately 500 million euros ($578 million) and it has been at the top of the FIFA World Rankings since 2018.

Even if many of the golden generation is now in their 30s, The Red Devils are still a very powerful team with a lot of potential.

Their squad includes players starting to enjoy their primes like Leicester City's Youri Tielemans and Timothy Castagne and promising young talents including Charles De Ketelaere of Club Brugge and Yari Verschaeren of Anderlecht.

There is no doubt that Belgium will be one of the top contenders as De Bruyne, Lukaku and Hazard are still serious threats for opposition teams in the upcoming 2022 World Cup.