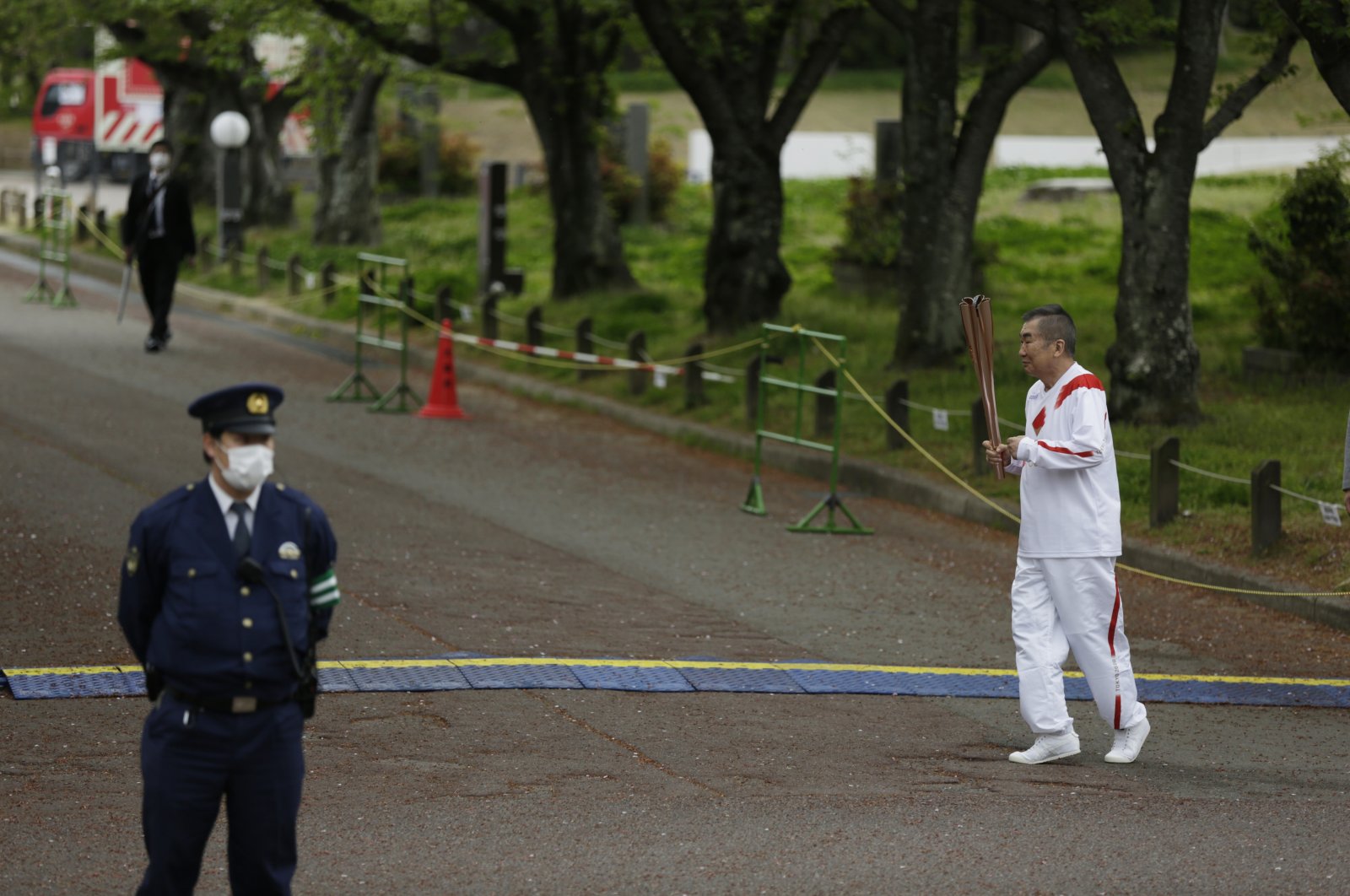 Entertainer Katsura Bunshi IV, participating as an Olympic torch relay runner, warms up as he waits for his preceding runner during the first day of the Osaka round at a former Expo site in Suita, north of Osaka, western Japan, Tuesday, April 13, 2021. (AP Photo)
by ASSOCIATED PRESS Apr 13, 2021 1:12 pm
RECOMMENDED

Exposing the risks of trying to hold the postponed Tokyo Olympics during a pandemic, the official torch relay ran through a mostly empty Osaka city park Tuesday.

It came on the same day that the government said new coronavirus cases in Osaka hit 1,099, a single-day record for Japan's second-largest metropolitan area.

The torch relay began three weeks ago in northeastern Japan, attempting to navigate around the pandemic with a total of 10,000 runners crisscrossing the country and bound for the opening ceremony on July 23 in Tokyo.

Osaka, which announced plans last week to take the relay off city streets and bar the public, became the first detour since the relay began. Organizers warned beforehand there may be more.

Wednesday's second leg in Osaka – the day the Tokyo countdown clock hits 100 days to go – will be in the same park under the same closed-doors conditions.

New COVID-19 cases are rising across Japan, where fewer than 1% of residents have been vaccinated in a very slow rollout.

Japan has attributed about 9,500 deaths to COVID-19, far fewer than many countries but higher than most neighbors in Asia.

Osaka, Tokyo and other parts of Japan have declared "quasi-emergency” conditions until early May with bars and restaurants being asked to close by 8 p.m.

Many runners arrived in Osaka's Expo '70 Commemorative Park by bus and ran short legs carrying the torch alongside metal barriers or in empty park space.

They were accompanied by security officials who jogged or walked alongside and followed by an "escort” or "promotional” vehicle festooned with logos of major Olympic sponsors Coca-Cola and Toyota.

After the postponement a year ago, organizers talked of doing away with the relay to save money. That idea never gained traction, largely because it's promoted by some of the IOC's largest sponsors.

The top sponsors paid the International Olympic Committee $1 billion in the last full Olympic cycle (2013-2016). That number could double when the next cycle is completed with the postponed Tokyo Games.

A poll conducted Saturday and Monday by Japanese news agency Kyodo showed 13.2% want the relay to continue until the opening ceremony. Another 49.3% said the relay should be canceled in areas with severe outbreaks and 35.9% said it should be called off entirely.

Opposition to holding the Olympics in a pandemic is also strong in Japan with up to 80% saying the games should be canceled or postponed.

The Olympics and Paralympics are expected to draw 15,400 athletes and tens of thousands of officials, judges, media and broadcasters. Fans from abroad have been banned.