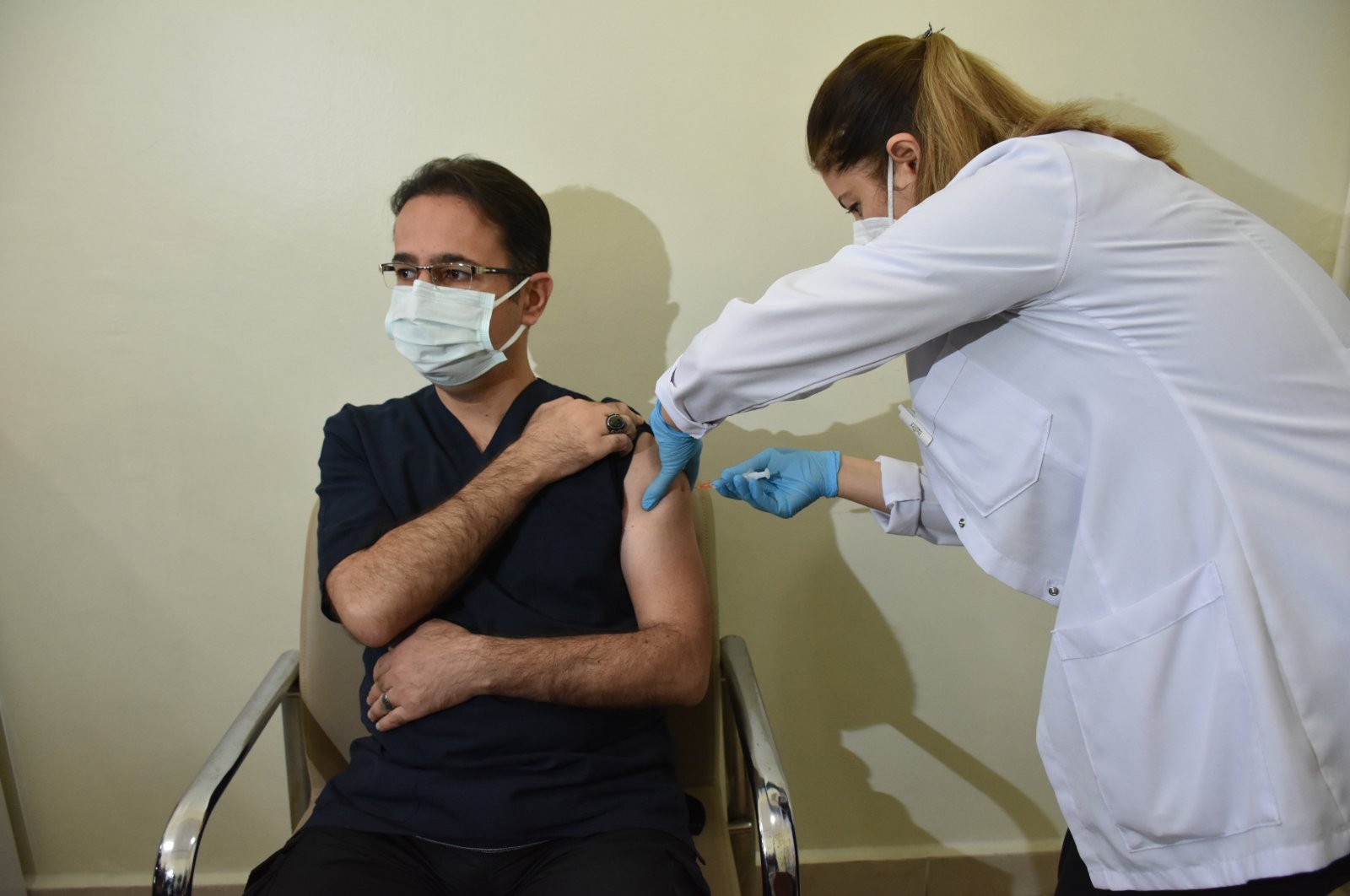 Hospitals and clinics across Turkey have been busy lately with the inoculation drive against COVID-19. More than 2.8 million people have now received the vaccine as part of the drive, and health care workers, who were first to receive jabs last month, started receiving the second dose of CoronaVac on Thursday. The inactive vaccine developed by China’s Sinovac is the only one available in the country, which plans to receive its first doses of the messenger RNA (mRNA) vaccine developed by Pfizer-BioNTech later this month.

While health care workers received their second jabs, people at the age of 70 and above are being administered their first shots starting Thursday. On Friday, people at the age of 65 or above will receive their first shots. The country's oldest citizens were vaccinated with their first jabs shortly after the first doses were administered to health care workers. After completing the vaccination of senior citizens, the country will move to age-independent vaccination in the next phase of the plan. These people include soldiers, police officers, teachers and people working in sectors critical for daily life, from logistics to the food sector. Inoculation is also planned this weekend for members of the Cabinet, in a bid to set an example for the public. Vaccine skeptics and anti-vaxxers thrive on social media, looking to deter inoculation, though surveys show a large majority of people are willing to be vaccinated.

Turkey received its first shipment of COVID-19 vaccines on Dec. 30 and gave them an emergency usage approval on Jan. 13, one day before administering them to health care workers.

The country received an additional batch of 10 million doses later in January, in two shipments. Overall, Turkey has acquired about 15 million doses. Authorities have signed deals to obtain more than 100 million doses of vaccine for the country of more than 83 million people. Koca announced Wednesday that a shipment of “500,000 to 800,000” doses of the Pfizer-BioNTech vaccine would arrive in the coming weeks while warning about new virus variants. By the end of March, the country plans to acquire a total of 5 million doses of this vaccine, which is the brainchild of a Turkish couple living in Germany.

The vaccination rollout is an appointment-only process. Every citizen is required to make an online appointment or arrange a vaccination time via a Health Ministry hotline. This practice aims to prevent crowding at clinics and hospitals. However, health care crews still vaccinate those unable to leave their residences at home, especially in remote rural areas without nearby clinics.

The age limit will gradually drop to younger people, and the penultimate group to be inoculated will be those between the ages of 18 and 29. Those who missed their scheduled period for vaccination will be the last to be inoculated.

“We had an opportunity to get familiar with the vaccine,” associate professor Nurettin Yiyit, who received his second jab on Thursday, told Anadolu Agency (AA). Yiyit is the chief physician of Sancaktepe Şehit Prof. Dr. Ilhan Varank Training and Research Hospital in Istanbul. The pandemic hospital has long been on the front line of efforts for the treatment of thousands infected with the virus since last year. About 4,500 people have been vaccinated at the hospital. Yiyit said they did not encounter any serious side effects, except a minor rash in three health care workers. “No one who received jabs was infected with the virus so far,” he underlined.

Asım Ocaklı, a surgeon at the hospital who received his second jab, said he did not suffer any problems. Ayşegül Erdal, a staff member at the maternity clinic, said she felt “safer” after vaccination. “People should trust the vaccine,” she said. Nurse Esra Zindanoğlu said they were looking forward to the vaccine, and she almost “ran” to get her shot. “This is currently the only solution against the pandemic,” she said.

Next phase for local vaccine

Turkey seeks to diversify its options for vaccines, and authorities hope a locally made vaccine will also be available soon for citizens. An inactive vaccine candidate, similar to CoronaVac, leads the domestic vaccine race. Developed by scientists at Erciyes University in the central province of Kayseri, ERUCOV-VAC moved to phase two human trials on Wednesday, two months after the beginning of phase one trials. Some 250 volunteers will be inoculated with the vaccine. Scientists hope to make it available for use in June after the completion of the analysis and approval processes that follow trials. The university cooperates with a local pharmaceuticals company for its plans to produce 10 million doses monthly.

Authorities say three more local vaccines will likely receive approval for phase one trials in the coming weeks. Among them are an inactive vaccine developed by Selçuk University in the central province of Konya, a vaccine based on virus-like particles (VLP) developed by Middle East Technical University (METU) and an adenovirus-based vaccine from Ankara University in the Turkish capital.