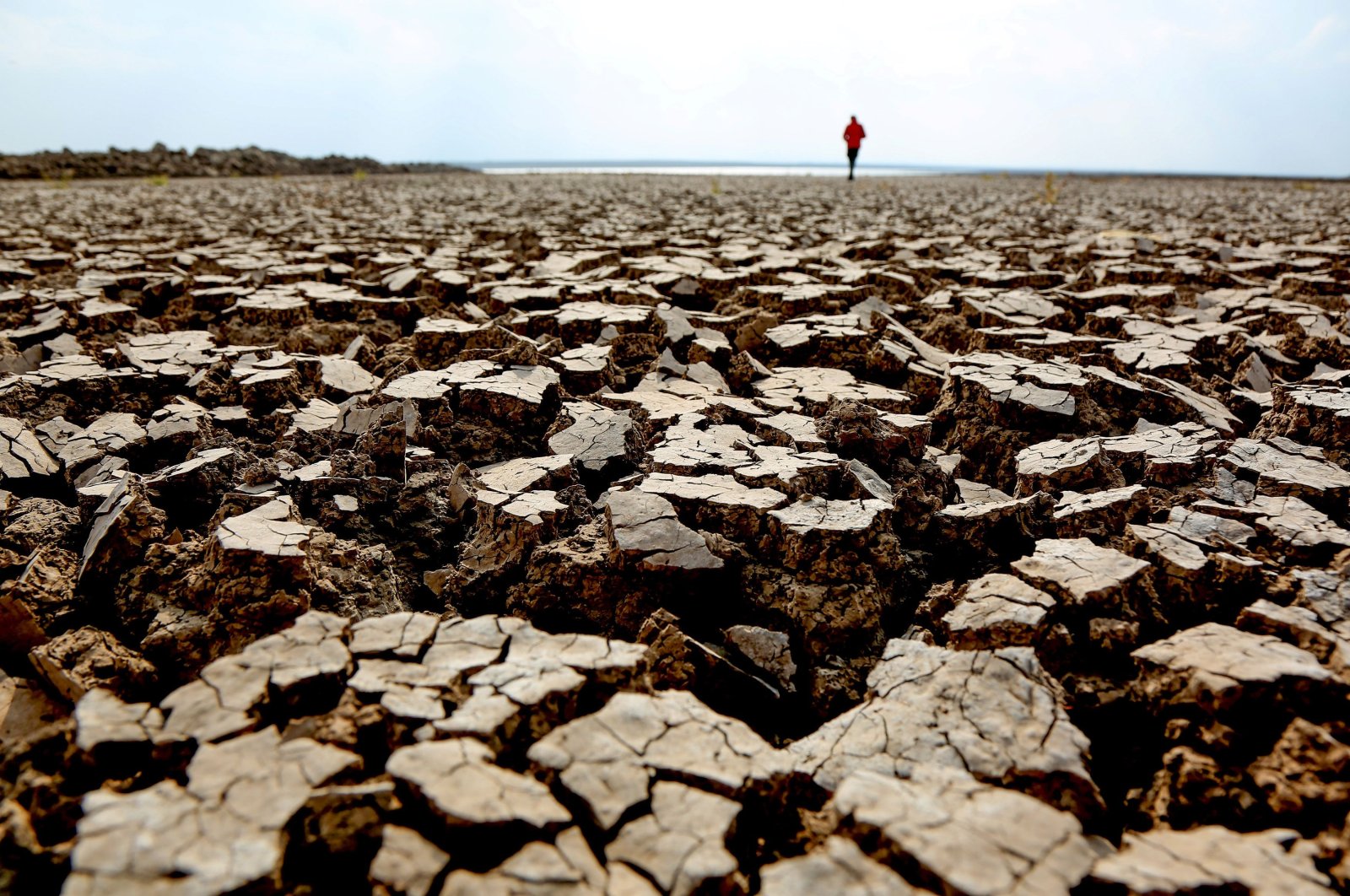 A person walks along cracks at the partly dried up Devegeçidi Dam, northwest of drought-stricken Diyarbakir, Turkey, Oct. 29, 2021. (Reuters Photo)
by Daily Sabah with Agencies Oct 31, 2021 11:56 am

As climate change continues to impact the environment, farmers around the world are unquestionably the worst hit. One of the most damaging consequences of climate change, drought, is pushing Turkish farmers, in particular, to the brink of bankruptcy

Rain fell on Bicar Içli's fields in southeastern Turkey for the first time in eight months last week, but he and other farmers are already paying the cost of a drought they blame on climate change.

Içli has not been able to plant his winter wheat crops due to the parched soil. Unless there is more rain in the coming weeks, he fears it will be too late.

"There is a serious problem here, in my opinion. There is a much greater risk than in previous years," said Içli, who has been working his fields in Diyarbakır province for five years.

As world leaders prepare to convene in Glasgow for the U.N. COP26 climate summit, Içli's woes highlight the problems facing farmers in Turkey and elsewhere due to extreme weather linked to climate change.

In an effort to limit their financial losses, Süleyman Iskenderoğlu said he and other farmers were trying to save by skipping on fertilizer.

"How are we to produce under these conditions?" he said, as he looked over his sun-baked fields.

Besides the lingering drought, Turkey was hit by flash floods in its Black Sea region and massive wildfires in southern regions during the summer.

Environmentalists say climate change and aggressive farming methods have fueled the risk of water shortages, which surfaced in late 2020 as official data showed water levels at dams had fallen to record lows due to a lack of rainfall.

At Diyarbakır's agricultural chamber of commerce, Chairperson Abdülsamet Uçaman said farmers had seen their output fall by 60%-70% this year compared to 2020.

"This has surpassed the level of concern. It is turning into a catastrophe," he said.

"Turkey is not a water-rich country," he said. "This data shows that our water potential, which we are already not rich in, will fall more in coming years."

Earlier this month, Ankara became the last member of the G-20 major economies to ratify the Paris climate accord.

Içli said he feared action to tackle carbon emissions in line with the agreement would be too late.

"Turkey signed the Paris climate agreement, but what will happen now?" he said. "We destroyed nature ... so I don't see the meaning of the climate accord after that."

For centuries, Lake Tuz in central Turkey has hosted huge colonies of flamingos that migrate and breed there when the weather is warm, feeding on algae in the lake’s shallow waters.

This summer, however, a heart-wrenching scene replaced the usual splendid sunset images of the birds captured by wildlife photographer Fahri Tunç: carcasses of flamingo hatchlings and adults lay scattered across the cracked, dried-up lake bed.

The 1,665 square-kilometer (643 square-mile) lake, Turkey’s second-largest lake and home to several bird species, has entirely receded this year. Experts say Lake Tuz (Salt Lake in Turkish) is a victim of climate change-induced drought, which has hit the region hard.

“There were about 5,000 young flamingos. They all perished because there was no water,” said Tunç, who also heads the regional branch of the Turkish environmental group Nature Association (Doğa Derneği). “It was an incredibly bad scene. It’s not something I can erase from my life. I hope I do not come across such a scene again.”

Several other lakes across Turkey have similarly dried up or have receded to alarming levels, affected by low precipitation and unsustainable irrigation practices. Climate experts warn that the entire Mediterranean basin, which includes Turkey, is particularly at risk of severe drought and desertification.

”(We have) rising temperatures and decreasing rain, and on the other side, the water needs for irrigation in agriculture,” said Levent Kurnaz, a scientist at Bogaziçi University’s Center for Climate Change and Policy Studies. “It’s a bad situation all over Turkey at the moment.”

A study based on satellite imagery conducted by Turkey's Ege University shows that water levels at Lake Tuz started to drop beginning in 2000, according to Anadolu Agency (AA). The lake completely receded this year due to rising temperatures, intensified evaporation and insufficient rain, according to the study.

Located in a semi-arid climate zone and water-stressed, Turkey aims to take more steps for efficient use of its limited water resources, as a climate crisis threatens the country of more than 83 million people.

Dry seasons have been prolonged further in the country and started affecting wider areas, while their impact is being felt by more people. Boosting water supplies and curbing the demand are essential in this new era.

The State Hydraulics Works (DSI), a public agency, is at the forefront of efforts to boost the supplies, with new dams, hydroelectricity plants and reservoirs. Below the surface, they work on underground dams, as part of an action plan by the Ministry of Agriculture and Forestry for “artificially improving water sources.” So far, 41 projects were launched for underground dams in the provinces of Izmir, Manisa, Çankırı, Konya, Bursa, Eskişehir, Antalya, Kütahya, Balıkesir, Nevşehir, Kayseri, Niğde, Malatya and Kayseri. Some are completed and others are under construction. By 2023, the government plans to complete the construction of some 200 underground dams.

Underground dams help to collect rainwater below the surface to increase the level of underground water and protect its quality and amount. Though they cannot be built everywhere as they need appropriate geographic and topographic conditions to store water, they have the double benefit of storing water both above and below the surface. They are also cheaper in terms of construction and land expropriation costs. Furthermore, they provide lower water evaporation rates compared to surface dams. Their construction focuses on alluvial-based valleys and they can meet the drinking water and irrigation needs of the small villages and towns around them.

Adem Sömer, a DSI official in the western province of Izmir, recently told Anadolu Agency that dams were essential for efficient use of water “going to waste.” He said: “Underground water has strategic importance for us as a partial amount of drinking water supplies are from underground water. We run a series of probes and surveys before the construction and check whether the soil has an alluvial basis. This basis is critical for collecting water. An impermeable layer is constructed first to accumulate water. Water accumulated here is transferred to storage units with the aid of probes or a pooling system.”

Sömer said they completed the construction of 10 underground dams in Izmir, Manisa and Uşak and they had six more planned. “Later this year, an underground dam with a capacity of accumulating 55,000 cubic meters of water will be completed in the Kiraz district of Izmir. It will provide up to 150,000 cubic meters of water yearly. It will primarily address irrigation demand in the Küçük Menderes delta where the agricultural activity is high. For instance, farmers will be able to irrigate 410 decares (101.31 acres) of land in the nearby Suludere village with water provided from this dam only,” he said.