A day in the life of an expat in Akyaka 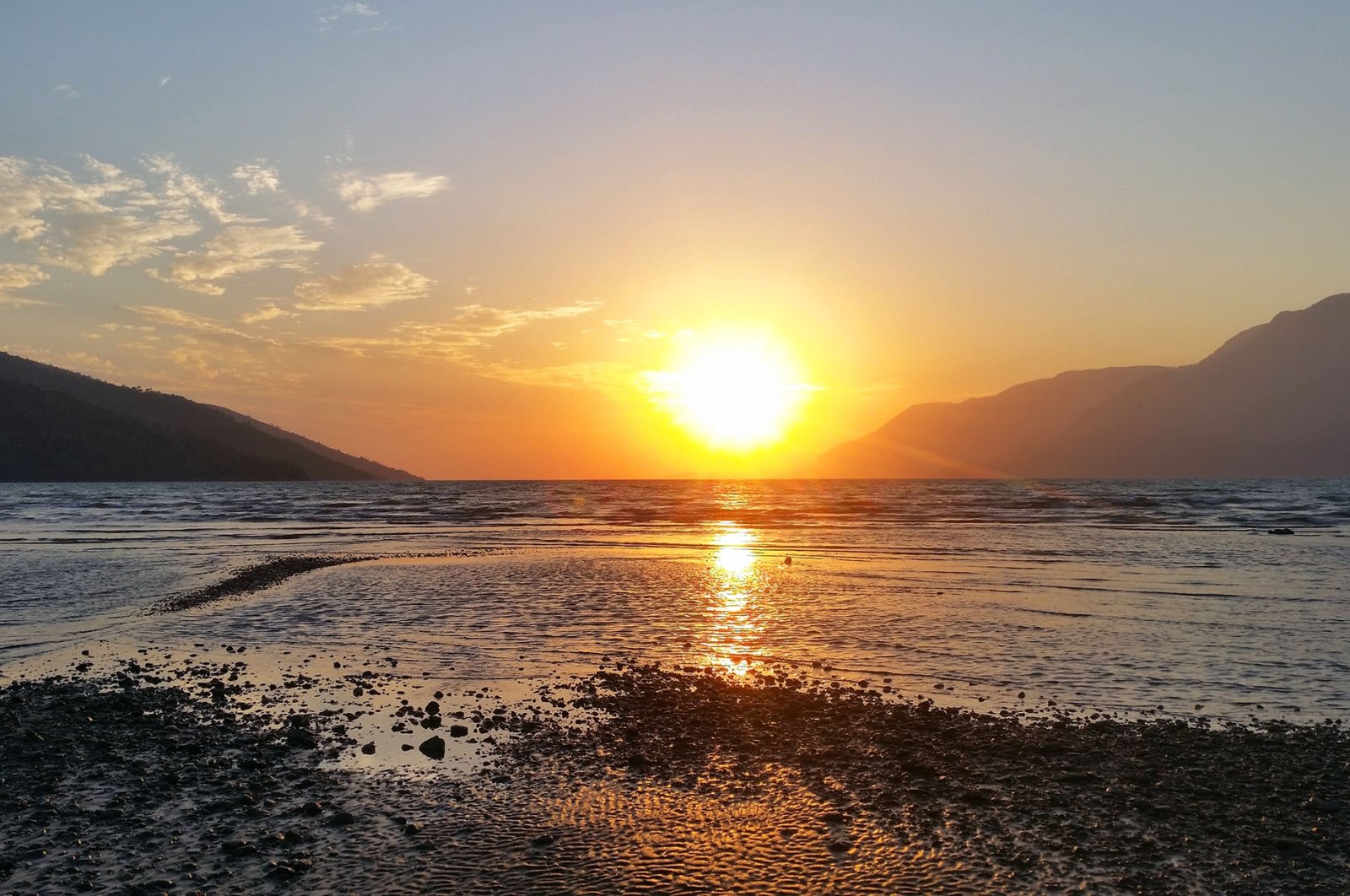 The warm sunset is a sight to behold at Akyaka's kitesurf beach in Muğla, southwestern Turkey. (Shutterstock Photo)
by Leyla Yvonne Ergil Mar 11, 2021 11:55 am

Situated on the Azmak River in the Gulf of Gökova, Akyaka boasts its own unique style of Ottoman architecture, spectacular vistas and accommodating venues, on top of being one of the best kite surfing destinations in the world

Word of Akyaka has intensified over the past few years as it has fast become the most popular vacation destination for athletes, hipsters and anyone in the know. That is because once you go; you may never want to leave. I arrived in Akyaka at the cusp of the reopening, with my initial days in the area marked by the bustling of the town trying to adapt to the new normalization process. Some venues opened immediately, others were scrambling to prepare, the streets were buzzing with locals, domestic tourists and gendarmerie alike, the latter as efforts to ensure everyone continued to safely social distance were strongly in place.

All about Akyaka’s unique architecture

The arrival into Akyaka is a sight for sore eyes, especially as the route I took to wind down the mountain that serves as the town’s backdrop resembles a spaghetti noodle on the map. In other words, the notorious Sakar Pass, is extremely windy and steep, yet smooth and properly marked and lit up for safety. Driving into the town, one is immediately overwhelmed by Akyaka’s unique charm due to the fact that the architecture, which almost resembles Swiss chalets, is a prominent feature and unique to the town. The wide streets are almost exclusively lined with cream-colored two-level villas with overhanging roofs and wooden window frames, balconies and accouterments.

Born in 1910, Nail Çakırhan, a Turkish poet and self-taught architect, who was also the recipient of the 1983 Aga Khan Award for Architecture, is the sole reason the region has maintained this unique melding of Ottoman and Aegean architectural style. While his early life was marred by arrests and exile for his Marxist views from 1930-1950, it was his return to Turkey and embracing of architecture in the 1970s, which transformed the seaside town of Akyaka and would earn him his legacy. While he is no longer amongst us, there is the Nail Çakırhan ve Halet Çambel Kültür ve Sanat Evi, which is a cultural and arts center devoted to the architect and his wife.

Not to be overshadowed by her husband, Çakırhan’s wife Halet Çambel was a Sorbonne-trained and internationally acclaimed archaeologist and Olympic fencer and was also the first Muslim woman to compete in the Olympic Games, which she did in 1936. Legend has it she was also asked to meet Adolf Hitler at the time but refused the invitation based on her political views. As for her professional career, Çambel was instrumental in the excavation and establishment of an open-air museum and national park at the Karatepe-Aslantaş archeological site. Çambel and Çakırhan were married for 70 years and both passed on in their late 90s.

The lay of the land

While the architecture alone could leave one speechless; the layout of the town across an expansive sandy beach and along a picturesque reed-lined creek by the name of Kadın Azmağı, the two divided by a quaint harbor, is also stunning in itself. Coupled by the backdrop of dramatically steep mountains and surrounded on all sides by forest, you just can’t make this stuff up. Then, there is also the neighboring kiteboarding beach, which has countless colorful kites flying in the sky due to the sport’s recent spike in popularity. While Akyaka was actually cited as a Cittaslow town in 2011, it is admittedly becoming increasingly more crowded with visiting urbanites, especially those trying to get some respite in the midst of the ongoing pandemic.

The kiteboarding beach, which the area is now famed for, is located a short drive or long hike away from town on a remote beach that is still in view, especially when there are kites and the people attached to them soaring through the sky! The beach now charges an entrance fee of 50 TL, as of last year, and it grants access to a half-dozen or so kiteboarding schools. The thermal winds, mixed with the shallow waters make the beach extremely conducive to learning the sport for newbies.

The town itself is small and easily navigated on foot, with the exception of an incline as you head away from the coast. The area which lies behind the Akyaka public beach is admittedly more crowded with countless restaurants and cafes with Mosso being the most popular venue overlooking the beach for dining. Heading southeast of town, there are a series of picturesque restaurants that line the creek, equipped with wooden terraces and tables set up above the flowing water. There is also a significant population of water birds such as ducks, geese and swans that just adds to the region’s charm. The restaurants along the creek vary in style and cuisine; however many an expat will head straight to West Café, located at the eastern end of the creek, as this restaurant, which also has a branch in Göcek, is famed for its eclectic style and western fare.

My favorite area for dining however happens to be the restaurants and cafes along Karanfil Street, where a variety of young Istanbullites, who have migrated to the town full time, have set up camp and created a colorful and casual culinary haven offering the likes of authentic pizza and Italian fare at La Festa, burgers at Big Bite, poutine at Agape Brasserie, Rahat Meyhane for Turkish cuisine, waffles and desserts at Café Bi’Yer and gourmet coffee at Pangea. Rest assured as all of these restaurants have predominantly, if not exclusively, outdoor street-side seating, which these days is the most desirable option. There is also a new culinary phenomenon happening on this street in which a few restaurants share their space with acclaimed chefs that are offering scrumptious breakfast service. One such development has occurred at La Festa, which is my personal favorite of the restaurant selection for the delicious food, relaxed outdoor seating and inviting atmosphere. Chef and cooking show host and television presenter Yiğit Alıcı takes the reins in the morning to prepare a classic western breakfast, including hash browns, Yorkshire pudding, French toast and pancakes. Big Bite across the street has a similar event in which Pişi Breakfast Akyaka serves up the Turkish fried dough specialty in the mornings. If the name Pişi Breakfast rings familiar, it is because they also operate a popular breakfast and burger café in Istanbul’s famous breakfast café neighborhood in Beşiktaş.

One of the benefits of being the newest hip vacation destination amongst the kite surfing generation is that there are top-notch musical performances that take place in summer in a couple of spectacular hotels that double as live music venues. Amongst the regular performers and well-known DJs that have performed in the past are none other than saxophonist and Nublu Records founder llhan Erşahın, a Turkish-Swedish musician who has transformed the jazz and fusion music scene in New York, and American expat Allen Hulsey, who is a singer, songwriter and multi-instrumentalist, including the guitar, bağlama and kanun, which he blends with electronic elements and now performs all over the world. Expats in Turkey may recall him as being one of the hosts of the ATV talk show “Elin Oğlu”, which featured male expats in Turkey from eight different countries who would share their personal experiences and perspectives. The two venues I am talking about are No. 22 Riders Inn and Room Kite Mansion, both of which double as hotels and performance venues.