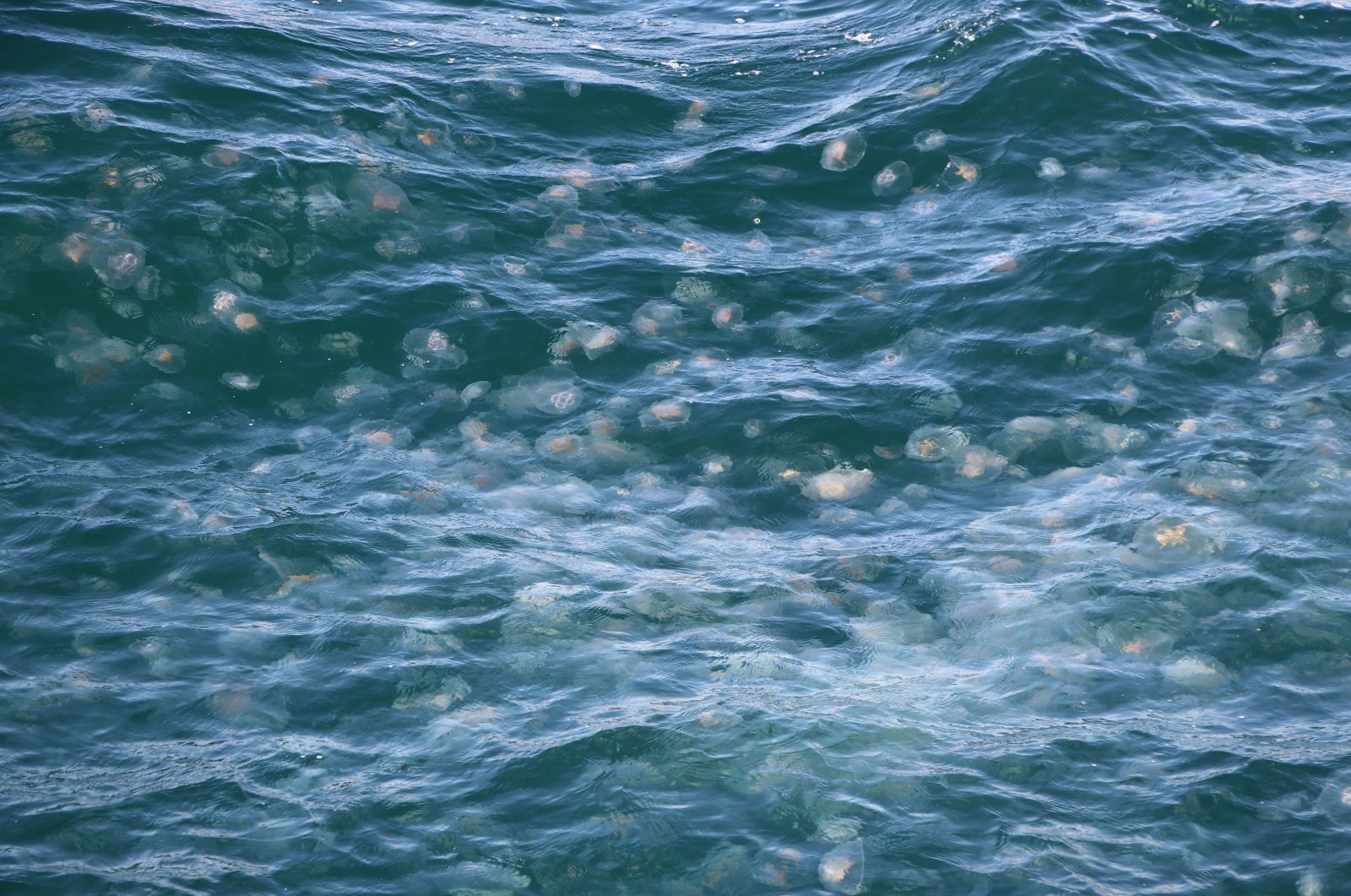 A recent rise in the number of jellyfish in the Marmara Sea, which became more visible in coastal areas over the past couple of days, poses a significant threat to the population of fish, a Turkish expert said Tuesday.

Fierce southwesterly winds, locally known as "lodos," had been in effect in the Marmara region over the past couple of weeks, pushing jellyfish closer to the coast in southern parts of Istanbul and Tekirdağ provinces. Seafront areas, beaches, coves and stagnant waters near piers and fishing wharves were swarmed with jellyfish, alarming locals.

Professor Melek Işinibilir Okyar, the dean of Istanbul University's Faculty of Aquatic Sciences, told Demirören News Agency (DHA) that the jellyfish boom in spring and fall has become a routine phenomenon over the past five to 10 years since the Marmara Sea has become richer in nutrients and organic pollution.

The rise in sea temperatures and overfishing also fuels the rise in jellyfish population, Okyar added.

"When jellyfish are overpopulated, they start competing with fish over nutrition while consuming fish eggs and larva in the meantime. This situation poses a significant problem for fish stocks," she said, adding jellyfish block fishnets and cause fishermen to return empty-handed or consume more fuel as it was the case with this summer's sea snot phenomenon.

Okyar likened the current jellyfish swarm to last year's jellyfish invasion, saying the only solution is the serious implementation of protective measures regarding the Marmara Sea.

The professor explained that jellyfish found in the Marmara Sea are usually less dangerous than other species found in the world's oceans but urged citizens to stay away from jellyfish anyway as they might cause itching.

The mucilage, or sea snot, outbreak in the Marmara Sea this summer made headlines in Turkey and around the world as an alarming sign of global warming and climate change, in addition to increasing pollution. While mucilage is a natural phenomenon and is not toxic or harmful for human health, it affected marine life greatly as it blocked the sea surface, preventing oxygen intake and covering the seabed.

Mucilage also affected commercial activities such as fishing and tourism and is believed to have caused further issues for transport and industries in which sea water is used in cooling systems.

Nearly one-third of Turkey's population resides along the coasts of the Marmara and its watershed, in addition to heavy commercial and industrial activities in the region. Untreated sewage, deep sea discharges and polluted rivers and streams are cited as the primary pollutants of the Marmara.

Oxygen shortage may be next threat for Turkey’s Marmara Sea

To make matters worse, the Marmara Sea is connected to the Mediterranean and the Black Sea via two narrow straits – namely the Dardanelles and the Bosporus – that carry sea water with different levels of salinity, which act as a barrier for oxygen dissolution. Thus the water of the Marmara Sea is low in oxygen and the waters below 30 meters are anoxic, meaning that its ecosystem is much more vulnerable to pollution and other human-made interventions.