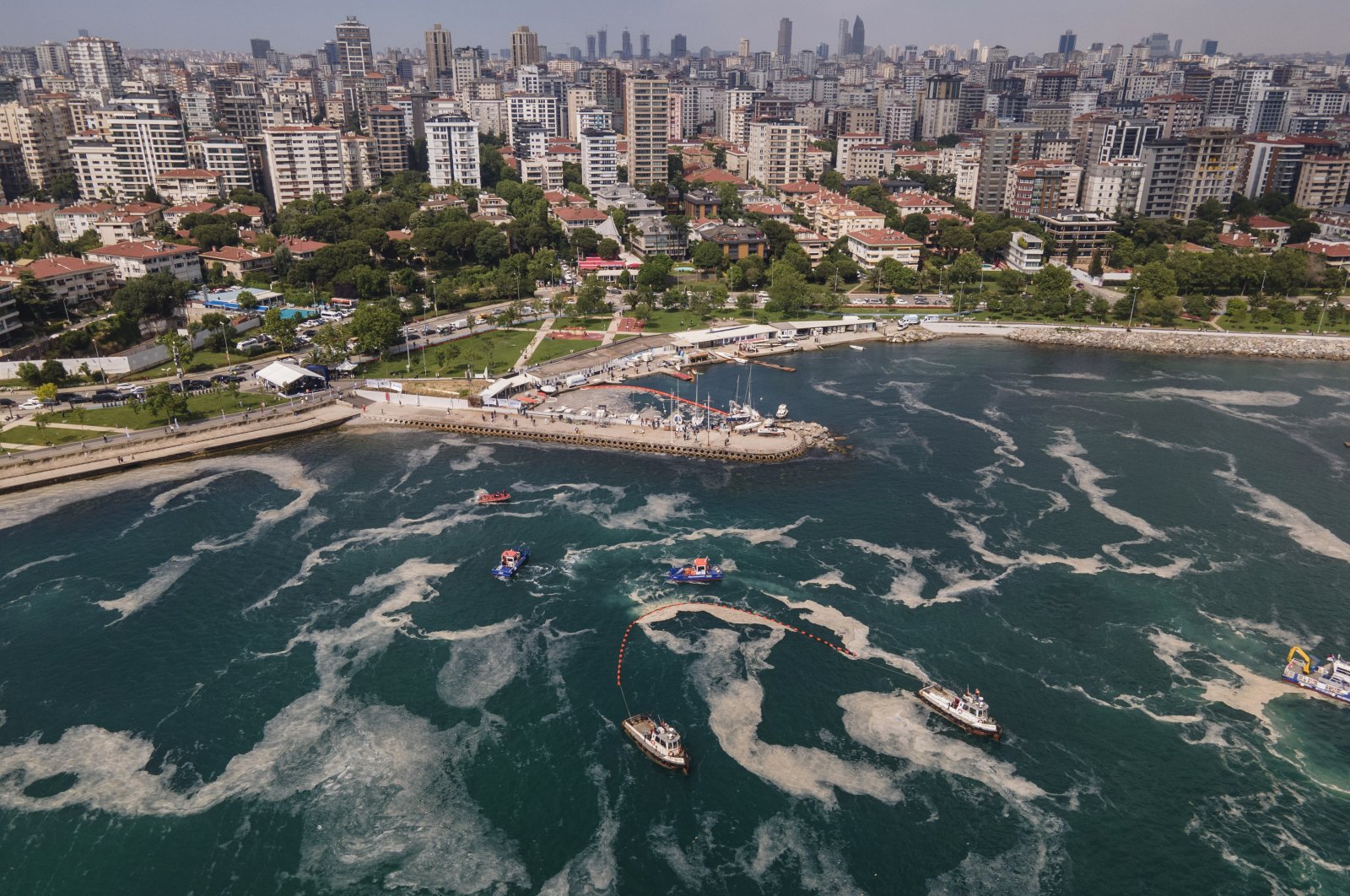 An aerial photo of the sea at the Caddebostan shore, on the Asian side of Istanbul, with a huge mass of marine mucilage, a thick, slimy substance made up of compounds released by marine organisms, in Turkey's Marmara Sea, June 8, 2021. (AP Photo)
by DAILY SABAH WITH AGENCIES Jun 10, 2021 9:13 pm
RECOMMENDED

Turkey’s Parliament agreed on Thursday to set up an all-party committee to investigate a slimy, floating mass of yellowish-white sea mucilage that is threatening marine life in the Marmara Sea.

The so-called “sea snot” – a thick substance made up of compounds released by marine organisms – has surfaced in waters south of Istanbul, alarming marine biologists and environmentalists.

The mucilage has also infiltrated portions of the adjoining Aegean and Black seas.

In a rare show of unity, five parties represented in Parliament agreed to a joint committee that would investigate the cause of the outbreak and propose measures to combat it.

The 19-member committee is to complete the probe within three months.

President Recep Tayyip Erdoğan, who has vowed to rescue the Marmara, has blamed the outbreak on untreated waste dumped into the sea and on climate change.

Istanbul, Turkey’s largest city with some 16 million residents, and five other provinces, factories and industrial hubs border the sea.

Over the past two days, 392 cubic meters (13,843 cubic feet) of mucilage were gathered for disposal.

Crews are working in 31 locations in Istanbul, Kocaeli, Bursa, Balıkesir, Çanakkale, Yalova and Tekirdağ, the provinces lining the Marmara.

Some 1,000 people aboard boats and on land are working around the clock to clean up the sea.

Sea snot has dealt a huge blow to fishing, the main income for thousands in the Marmara, with fish turning up dead in areas affected by the mucilage.

Although experts say the snot does not leave “poison” inside the fish as previously presumed, fishermen have complained of a drop in sales.

Though fishing season, which otherwise started out well, is over now, fishermen say that if the mucilage lingers, the new season may see a further drop in sales.

Authorities say it may take at least one year to clean up the sea snot.