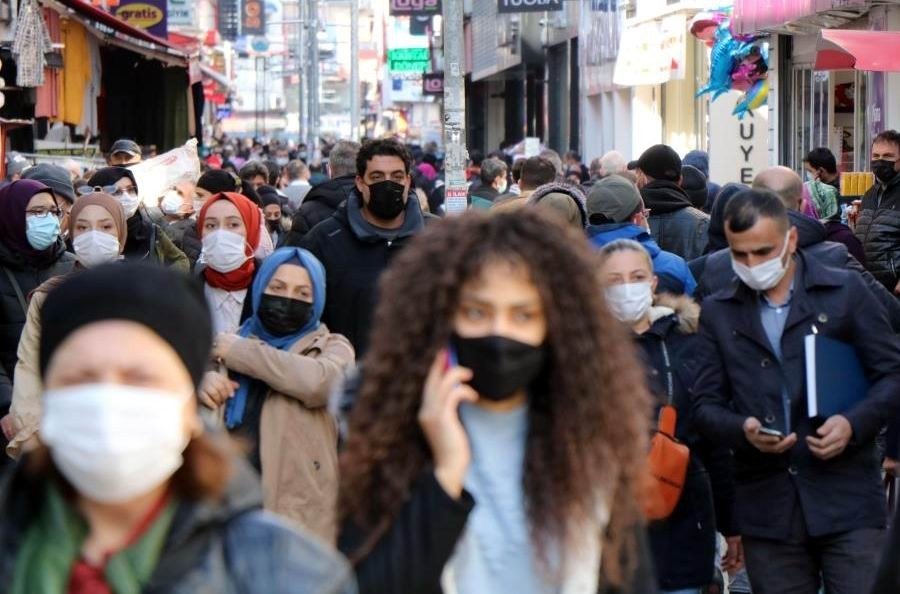 A sudden surge in the number of COVID-19 cases in Turkey cannot be explained away solely with a normalization process, according to experts. Indeed, they point out the greater share of new variants of the virus in coronavirus cases across the country.

Daily cases skyrocketed above 20,000 this week and continue climbing to their highest levels this year, while fatalities do not show signs of decline.

Professor Uğur Arslan, who heads the microbiology department at Selçuk University in Konya, a central province under “very high risk” from the outbreak, said more than half of the cases there stem from “mutated viruses.” With around 252 cases per 100,000 people, the province is in the “red” category in the color-coded map of 81 provinces, based on their risk level. All measures are in place, from curfews to mandatory masks and enforced social distancing, but the cases thrive anyway. Speaking to the Sabah newspaper, Arslan said the variants have now replaced “old” viruses, and they are more infectious. “Even a small amount of exposure can make people sick. We need more measures,” he said.

Authorities sped up vaccination while expanding tests. Any positive patient is also examined for mutated virus infection. “In Konya, we have a high rate of the British variant,” Arslan said. But he stressed that the public disregard for rules is also a culprit in the increasing number of cases. “Restrictions were relaxed in a limited way, but people exploited it. We see people visiting each other in their houses and even having sleepovers. They travel more to other cities. If the situation continues like this, curfews may come back, and we will be back to square one,” he said. In most provinces, Saturday curfews were lifted and several businesses like restaurants and cafes reopened. Nighttime curfews during weekdays and a daylong curfew on Sunday remain in place.

Professor Oğuz Uzun from the Faculty of Medicine at Ondokuz Mayıs University in Samsun echoes similar concerns. Uzun told Demirören News Agency (DHA) that the majority of cases in the province, which is at the highest risk from the outbreak with more than 500 cases per 100,000 people, are the “British variant.” “It has different features, and we see more often than not, symptoms like loss of consciousness, headache and dizziness. We see more young patients and occasionally, they suffer from a severe form of the disease,” he added. Uzun said there were no problems in treating the patients, but cases were snowballing. “We need to stop this. For example, we should stop people from violating self-isolation at home. Some patients in self-isolation mingle with other household members and sometimes, go out. The number one rule of fighting the pandemic is ensuring isolation,” he noted.

Uzun warned that daily cases in the Black Sea province have exceeded 800, and they needed to conduct more tests to prevent infections from spreading from asymptomatic patients, another major concern. “I think there should be a full lockdown for Samsun,” he added.

Funda Furtun, an infectious disease expert in the province, said occupancy rates in hospitals were climbing and new cases could add more burden to health care facilities in the province. “Hospitals are not challenged much now as most patients are outpatients but if the numbers increase, we could face a problem,” she told Ihlas News Agency (IHA). Furtun also pointed out that along with the British variant, the South African variant was also present in Samsun. “As far as I know, there are at least 20 cases of the South African variant,” she said.

As variants take hold, Turkey is relying on a mass vaccination drive. So far, more than 14.5 million shots of CoronaVac, a vaccine developed by China’s Sinovac, were delivered to citizens. More than 6.3 million people received their second shots, while the number of those administered first jabs exceeded 8.2 million as of Friday.

Health Minister Fahrettin Koca said Thursday after a meeting of his ministry’s Coronavirus Scientific Advisory Board that a total of 100 million doses of new vaccines were expected to arrive in Turkey by the end of May. In addition to CoronaVac, Turkey has now received 1.4 million shots of Pfizer-BioNtech jabs and according to Koca, this figure will reach 4.5 million by April. He added that an optional deal for another 30 million shots from Pfizer-BioNTech has also been made.

The Pfizer-BioNtech vaccine will be available to whoever has their turn for vaccination. The country adheres to an inoculation plan that gave priority to health care workers in vaccination. It is followed by the vaccination of elderly people, a process that still continues, with people between the ages of 60 and 64 next. Teachers are also prioritized and their vaccination started last month before Turkey reopened most schools for in-person education. Teachers will likely be the first to receive the Pfizer-BioNtech vaccine.