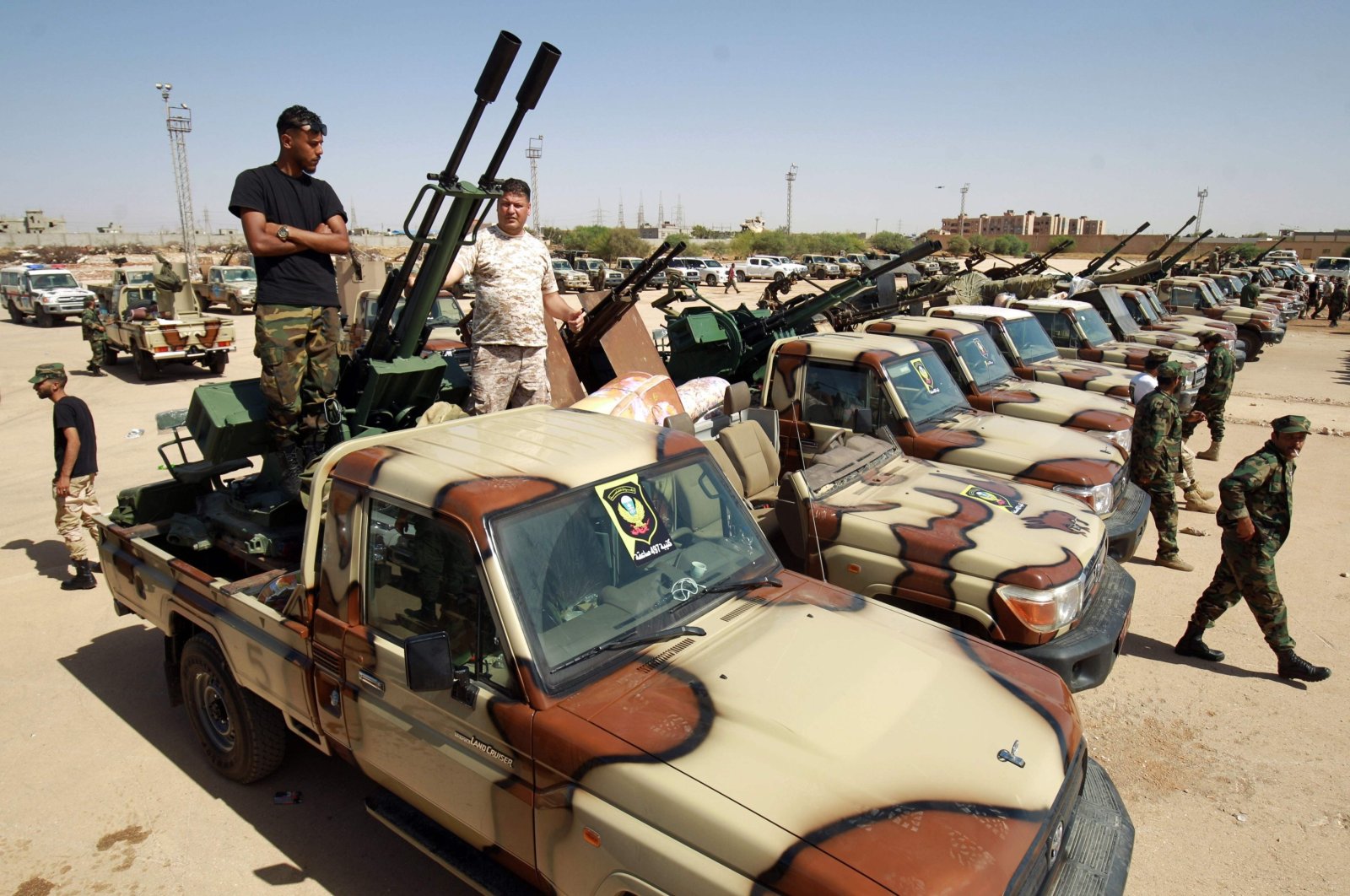 Forces loyal to putschist Gen. Khalifa Haftar gather in the city of Benghazi, on their way to back up fellow fighters on the front line west of the city of Sirte, Libya, June 18, 2020. (AFP Photo)
by DAILY SABAH WITH AA Aug 11, 2021 10:37 am
RECOMMENDED

At a celebration marking the 81st anniversary of the establishment of the Libyan army, making an unmistakable reference to a failed April 2019 attack on the capital Tripoli by putschist Gen. Khalifa Haftar's militia, Libya's Prime Minister Abdul Hamid Mohammed Dbeibah stated Tuesday that national armies are meant to protect their capitals, not storm them.

"Capitals are precious pearls, and armies were founded to protect them, not to storm them, terrorize their people, and destroy their property, and no national army can terrorize its people and cities for any reason," said Dbeibah, according to state TV Al-Watania.

On June 4, 2020, the Libyan army announced the liberation of Tripoli from Haftar's militia, following an offensive that left countless civilians dead and wounded, along with extensive material damage and destruction.

The withdrawal of Haftar's militias from other areas of the country was followed by the discovery of many mass graves.

Since June, following the defeat of Haftar's forces in western parts of Libya, the Libyan government found at least 300 dead bodies in mass graves in Tarhuna and south of Tripoli.

"The army's job is to protect our land, sea, and air borders" without prejudice," Dbeibah said, adding that "the Libyan army was born to protect peace," not issue threats.

He stressed that "he who takes war as a means lacks far-sightedness as he sacrifices everyone for the sake of flimsy arrogance."

In the wake of the 2011 death of strongman leader Moammar Gadhafi, the oil-rich country suffered through years of armed conflict.

With the support of Arab and Western countries, mercenaries, and foreign fighters, Haftar's militia fought the former internationally recognized Government of National Accord (GNA), which enjoyed Turkish support.

Turkey was the main backer of the GNA against the illegitimate eastern-based Haftar forces during their offensive to capture Tripoli from the legitimate government. Turkey's military support led to a GNA victory over Haftar's forces. Since then, Libya has been going through United Nations-led political process in a relatively stable and peaceful environment.

"The prestigious army institution cannot be affiliated with a person, whatever his capacity, but rather he is our army and the protector of our protection," Dbeibah asserted.

On Monday, Haftar said that his militia would not be subordinate to the current authority, and would only deal with "an authority directly elected by the people."

This year Libya has witnessed a political breakthrough under U.N. auspices. On March 16, an elected transitional authority made up of a unity government and a presidential council, assumed their duties to lead the country through a transitional phase to parliamentary and presidential elections slated for Dec. 24.

But Haftar is still flouting the legitimate government and leads an armed militia that controls many areas, and calls himself the "commander-in-chief of the Libyan Armed Forces," challenging the Presidential Council's authority.

Meanwhile, the United States ambassador and special envoy to Libya began a two-day visit to Egypt's capital of Cairo on Tuesday to meet with Haftar and Egyptian officials, according to an official announcement.

Richard Norland's visit comes as part of Washington's efforts to "support Libyan parliamentary and presidential elections in December," the U.S. Embassy to Libya said on Twitter.

"Amb. Norland continues to focus on the urgency of supporting the difficult compromises necessary to establish the constitutional basis and legal framework needed now in order for the elections to take place on Dec. 24," the embassy tweeted.

It also affirmed the U.S.' support for Libyans to choose their leaders within the democratic framework and urged "key figures" to play an effective role to this end.