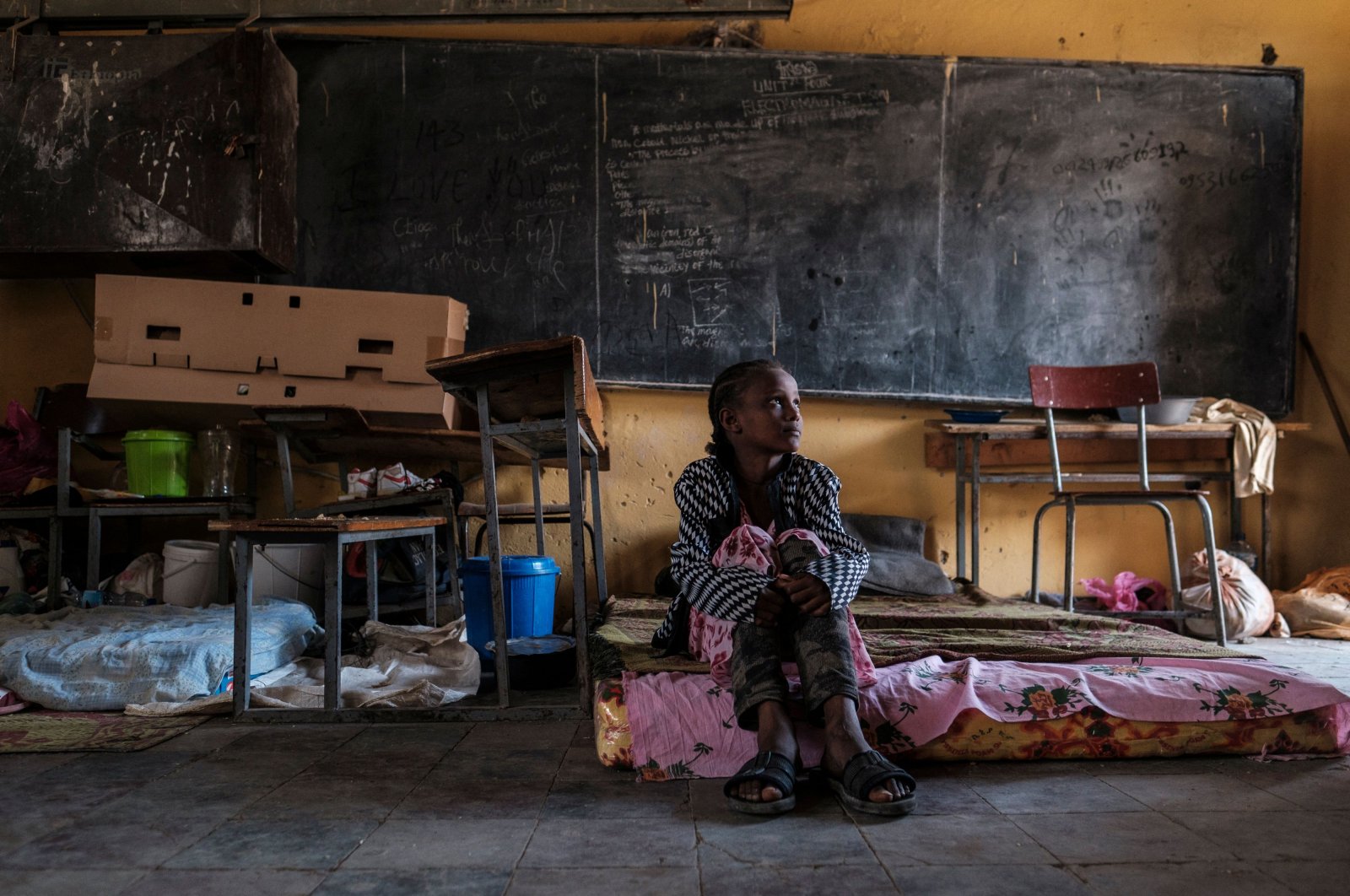 A displaced girl from Western Tigray sits on a mattress in a classroom at the school where she is sheltering in Tigray's capital Mekele, Ethiopia, Feb. 24, 2021. (AFP Photo)
by Associated Press Mar 25, 2021 7:22 pm
RECOMMENDED

The United Nations and an Ethiopian rights agency said on Thursday they had agreed to carry out a joint investigation into abuses in the embattled region of Tigray, where fighting persists as government troops hunt down the region's fugitive leaders.

An investigation of all parties to the conflict is "part of the much-needed accountability process" for victims of the conflict, the government-established Ethiopian Human Rights Commission and the Office of the United Nations High Commissioner for Human Rights said in a statement.

"With multiple actors involved in the conflict and the gravity of the reported violations, an objective, independent investigation is urgently required," the statement said, adding that deployment of investigators will start as soon as possible for an initial period of three months.

The announcement came a day after the humanitarian group Doctors Without Borders, known by its French acronym MSF, reported that its staff on Tuesday saw Ethiopian government troops kill at least four civilians in Tigray.

Three MSF staff alleged that they witnessed the extrajudicial killings when they were traveling ahead of two public mini-buses that were stopped by soldiers on the road from Mekele, the regional capital, to the city of Adigrat.

"The soldiers then forced the passengers to leave the mini-buses. The men were separated from the women, who were allowed to walk away. Shortly afterward, the men were shot,” according to MSF, which said in a statement late Wednesday that the "horrific event further underscores the need for the protection of civilians during this ongoing conflict.”

Ethiopian authorities have not responded to MSF's allegations of the killings after an apparent ambush of a military convoy by an armed group. MSF's statement said Ethiopian military vehicles were on fire at the scene of the executions.

Ethiopian Prime Minister Abiy Ahmed, who was in Eritrea Thursday for talks with President Isaias Afwerki, told lawmakers earlier this week that atrocities have been reported in Tigray, his first public acknowledgment of possible war crimes in the country’s northern region.

Abiy also admitted, after repeated denials by authorities, that troops from neighboring Eritrea have gone into Tigray, where their presence has inflicted "damage” on the region’s residents.

Eritrean soldiers killed over 100 people, including pilgrims attending an annual religious event, on Nov. 28 and the next day in the city of Axum, the Ethiopian Human Rights Commission said in a report released Tuesday.

Yemane G. Meskel, Eritrea’s information minister, said in a Twitter post on Thursday that "defamation campaigns against Eritrea have been ramped up" in recent days.

Concern continues to grow over the humanitarian situation in Tigray, home to 6 million of Ethiopia’s more than 110 million people. Authorities haven’t cited a death toll in the war, which began in November when Abiy sent government troops into the region after an attack there on federal military facilities.

The United States has characterized some abuses in Tigray as "ethnic cleansing,” charges dismissed as unfounded by Ethiopian authorities. The U.S. also has urged Eritrean troops, who are fighting on the side of Ethiopian government forces, to withdraw from Tigray.

The Ethiopian prime minister, who won the Nobel Peace Prize in 2019 for his efforts to make peace with Eritrea, has been under pressure to end the conflict in Tigray as well as to institute an international investigation into alleged war crimes, ideally led by the U.N.

It remains unclear if the joint investigation announced on Thursday will satisfy the demands of opposition groups.

Humanitarian officials have warned that a growing number of people might be starving to death in Tigray. The fighting erupted on the brink of harvest in the largely agricultural region and sent an untold number of people fleeing their homes.

Witnesses have described widespread looting by Eritrean soldiers as well as the burning of crops.