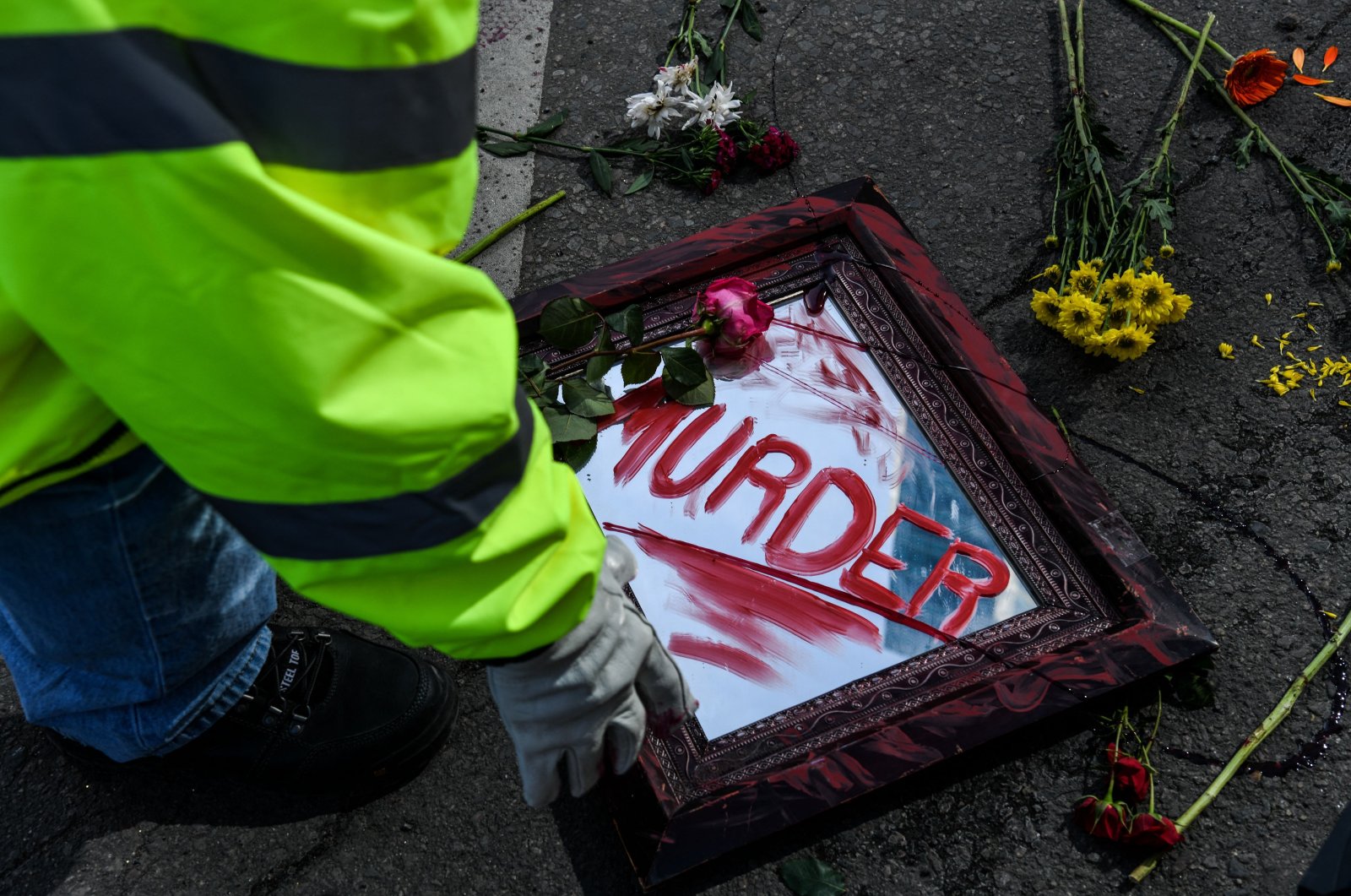 City workers clear out flowers and mirrors placed on the road as part of an art installation outside the Hennepin County Government Center after the first day of jury selection began in the trial of former Minneapolis Police officer Derek Chauvin in Minneapolis, Minnesota, U.S., March 8, 2021. (AFP Photo)
by French Press Agency - AFP Jun 25, 2021 12:27 pm
RECOMMENDED

A U.S. court could sentence former police officer Derek Chauvin to 30 years Friday for the murder of African American George Floyd, a killing that sparked America's biggest demonstrations for racial justice in decades.

Minnesota law provides for a minimum sentence of 12 1/2 years for the white, 45-year-old killer, who has been jailed since being convicted on three counts of murder and manslaughter two months ago.

But Judge Peter Cahill, who will hand down the sentence at 1:30 pm (6:30 p.m. GMT) in a Minneapolis court, identified aggravating circumstances that could signal a much heavier punishment.

He said Chauvin had "abused his position of trust and authority," treated Floyd with "particular cruelty" in front of minors and "committed the crime as a group with the active participation of at least three other" officers.

Chauvin and three colleagues arrested Floyd, 46, in May last year on suspicion of having passed a fake $20 bill in a store in Minneapolis, a northern city of around 420,000. They handcuffed him and pinned him to the ground in the middle of the street.

Chauvin then knelt on the back of Floyd's neck for nearly 10 minutes, indifferent to the dying man's groans and to the pleas of distraught passersby.

The scene, filmed and uploaded by a young woman, quickly went viral. After weeks of home confinement due to the COVID-19 pandemic, hundreds of thousands of people poured onto streets across the country and also overseas, to demand an end to racism and police brutality.

It took weeks for the mass demonstrations to taper off, but the debate around the pressing social issues remains vivid in the United States, where President Joe Biden has been slow to come up with the police reforms he promised during his campaign.

Late Thursday, Republican and Democratic lawmakers announced that after weeks of negotiations they had come up with "an agreement on a framework addressing the major issues for bipartisan police reform."

"Over the next few weeks we look forward to continuing our work toward getting a finalized proposal across the finish line," the members of Congress said in a statement.

Chauvin's trial was closely followed by millions across the country.

The former police officer, who was present for the full six weeks of his trial, did not testify. His lawyer said he had followed police procedures in force at the time and that Floyd's death was due to health problems exacerbated by drug use.

The jurors were not convinced and took less than 10 hours to convict. Their decision was greeted with a huge sigh of relief across the country – many had feared an acquittal would lead to worse unrest, while others feared that once again a white police officer would get away with what they saw as murder.

Ahead of the sentencing, Chauvin's lawyer Eric Nelson pleaded that his client made "an error in good faith" and requested a reduced sentence to time already served, which would allow his client to be released immediately.

But the prosecution cited Chauvin's "particularly cruel" conduct and called for the maximum of 30 years.

Whatever the decision, the defense will appeal the verdict, Nelson has said, citing doubts over the impartiality of some jurors.

Neither will the case end with Chauvin: His three former colleagues will face trial in March 2022 on charges of complicity in homicide.

In parallel, the four men also face federal charges of violating Floyd's constitutional rights. No date has yet been set for that trial.