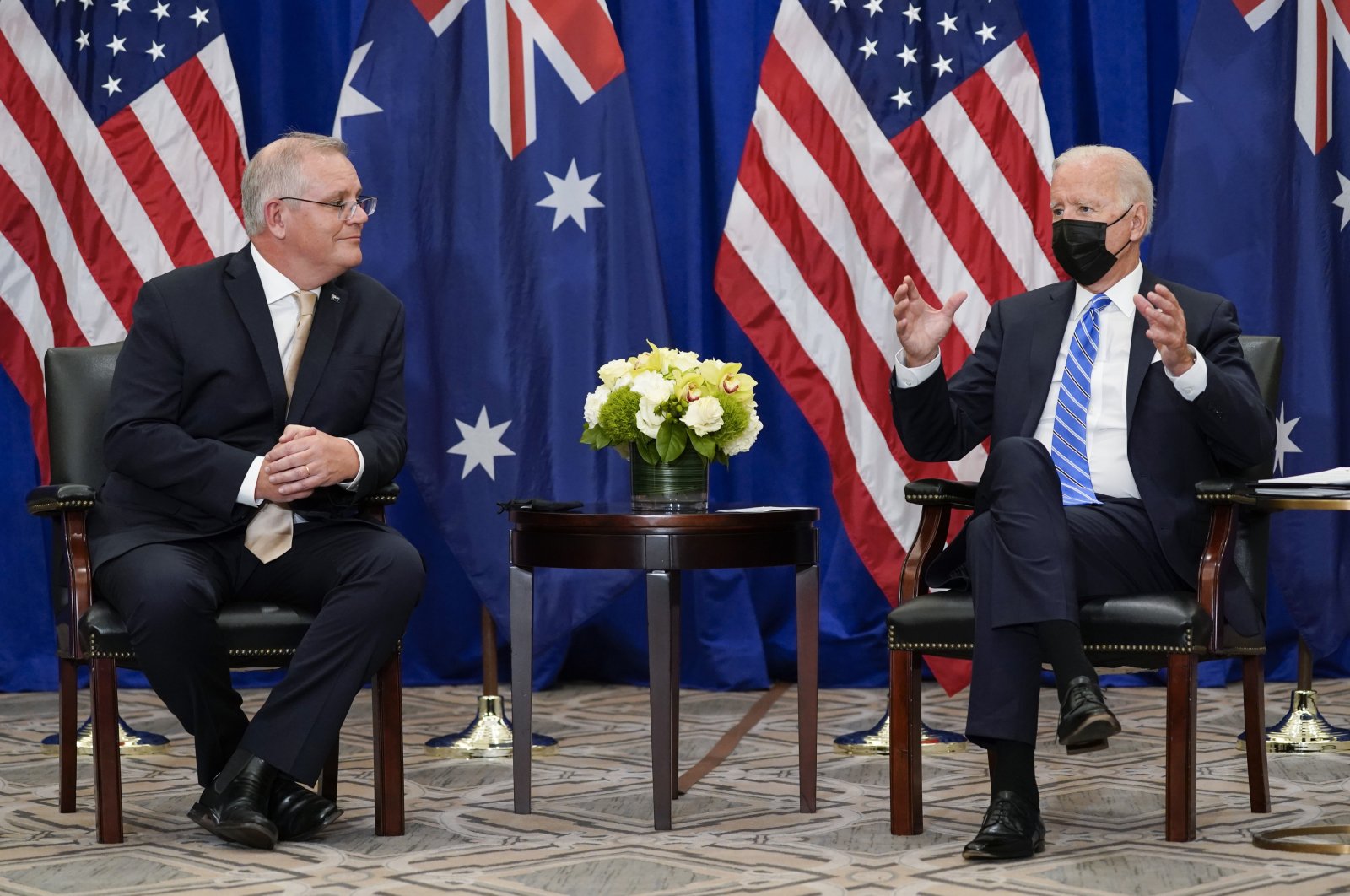 United States President Joe Biden is set to host the first in-person gathering of leaders of an Indo-Pacific alliance known as "the Quad” on Friday, wrapping up a tough week of diplomacy in which he faced no shortage of criticism from both allies and adversaries.

Biden's meeting with leaders from India, Japan and Australia at the White House gives the U.S. president a chance to put the spotlight on a central aim of his foreign policy: turning greater attention to the Pacific in the face of what the U.S. sees as China’s coercive economic practices and unsettling military maneuvering in the region.

The four leaders' talks are also expected to center on climate, COVID-19 response and cybersecurity. Before the summit, the Japanese and Indian governments welcomed a recent announcement that the U.S., as part of a separate new alliance with Britain and Australia, would equip Australia with nuclear-powered submarines. It’s a move that will allow Australia to conduct longer patrols and give it an edge on the Chinese navy. But the announcement infuriated France, which accused the Biden administration of stabbing it in the back by squelching its own $66 billion deal to provide diesel-powered submarines.

Tensions between Biden and French President Emmanuel Macron eased after the two leaders spoke Wednesday and agreed to take steps to coordinate more closely in the Indo-Pacific.

Michael Green, who served as senior director for Asia at the National Security Council during the George W. Bush administration, said Japan and India welcome the U.S.-U.K.-Australian alliance "because it will really for the next 50 years reset the trajectories in naval power in the Pacific and from the perspective of those countries stabilize things as China massively builds up its naval forces.”

Beijing, for its part, has spoken out vigorously against the alliance, with Chinese Foreign Ministry spokesperson Zhao Lijian calling it a reflection of "outdated Cold War zero-sum mentality and narrow-minded geopolitical perception” that would intensify a regional arms race.

Beijing has also sought to push the notion that the creation of the alliance indicates the U.S. will favor Australia in the Quad at the expense of Japan and India, said Bonny Lin, senior fellow for Asian security at the Center for Strategic and International Studies in Washington. Beijing also has sought to undercut the Quad as out of step with other nations in Southeast Asia and portrayed members of the Quad as "U.S. pawns,” Lin said.

The group's White House meeting is playing out as China continues efforts to make a show of force in the region. On Thursday, China sent 24 fighter jets toward Taiwan after the island announced its intention to join a Pacific trade group, the Comprehensive and Progressive Agreement for Trans-Pacific Partnership, that China has also applied to join. Biden's meeting with the Indo-Pacific leaders caps a busy week of diplomacy for the president in which he addressed the U.N. General Assembly (UNGA) in New York and served as host for a virtual global summit on fighting COVID-19.

Biden – and leaders of other wealthy nations – faced criticism about the slow pace of global vaccinations and the inequity of access to shots between residents of wealthier and poorer nations. The pushback from leaders of low- and moderate-income countries came even as Biden announced plans for the U.S. to double to 1 billion doses its purchase of the Pfizer-BioNTech vaccine to share with the world. Biden is also scheduled to meet separately Friday with Indian Prime Minister Narendra Modi and Japanese Prime Minister Yoshihide Suga.

Modi, who met with Vice President Kamala Harris Thursday, is expected to raise with Biden the way forward with the Taliban government in Afghanistan, according to a person familiar with the Indian official’s agenda. The person was not authorized to comment publicly. Modi is expected to raise objections to the Taliban’s effort to get recognition at the U.N. The Modi government also has concerns about the influence it believes Pakistan’s intelligence service exerted in how factions of the Taliban divvied up government offices in Kabul.

When the Taliban previously controlled Afghanistan, the group supported militants in Kashmir, a long-disputed territory that’s been at the center of wars and skirmishes between India and Pakistan. The Haqqani network was behind two suicide bombings of India’s embassy in 2008 and 2009.

Members of the network, which the U.S. has designated a terrorist organization, have been given top positions in the Taliban government. In a brief appearance before reporters at the start of his meeting with Harris, Modi credited the Biden administration with making headway on both COVID-19 and climate change.

"You took up the leadership of the United States in a very challenging atmosphere and challenging times, but within a very short period of time, you have had many achievements to your credit, whether that be COVID-19, climate, or the Quad,” he said. "On all these issues, the United States has taken very important initiatives.”

Ahead of Modi's visit, dozens of Indian Americans gathered Thursday at Lafayette Square near the White House, calling on the international community to "save India from fascism." The group of people chanted anti-Modi slogans and held placards, slamming the Indian prime minister for human rights violations as well as persecution of Muslims and other ethnic minorities. Modi and his government have been receiving accusations of launching a major crackdown on its 200 million Muslim population across India and New Delhi-administrated Kashmir. By implementing new laws and restrictions in the disputed region, Modi promoted and inspired Islamophobia among Indians, activists say.

Right before the Biden-Modi meeting, the demonstrators urged the U.S. president to stick to his promises to make human rights the center of his policies. The crowd referred to last year's promises that Biden and Harris made during the election campaign, where leaders of Democrats denounced New Delhi for its crackdown in Kashmir, which includes implementation of a citizens list and imposing an anti-Muslim citizenship law.

“What Modi represents is totally against American values. By allowing him into the United States and hosting him in the White House compromises our democracy as well,” Victor Begg, a 74-year-old activist told a reporter from the Doha-based Al-Jazeera media outlet.

“Right now, we are witnessing a slow genocide of minorities. The lives of India’s 200 million Muslims are at stake, and the Biden administration can no longer afford to stay silent. This meeting is the right time to send a stern message to India,” the president of an advocacy group, the Indian American Muslim Council, Syed Ali said.

Suga, in his one-on-one with Biden, was expected to raise China, North Korea, Afghanistan, COVID-19 response and climate change, according to a Foreign Ministry official who was not authorized to comment publicly and spoke on the condition of anonymity. North Korea last week said it successfully launched ballistic missiles from a train for the first time, striking a target in the sea some 800 kilometers (500 miles) away.

That test came after the North this month said it tested new cruise missiles, which it intends to make nuclear-capable, that can strike targets 1,500 kilometers (930 miles) away, a distance putting all of Japan and U.S. military installations there within reach.